By Barry Saxifrage | Analysis, Climate Solutions Reporting | March 15th 2022
#1963 of 2168 articles from the Special Report: Race to a Safer World 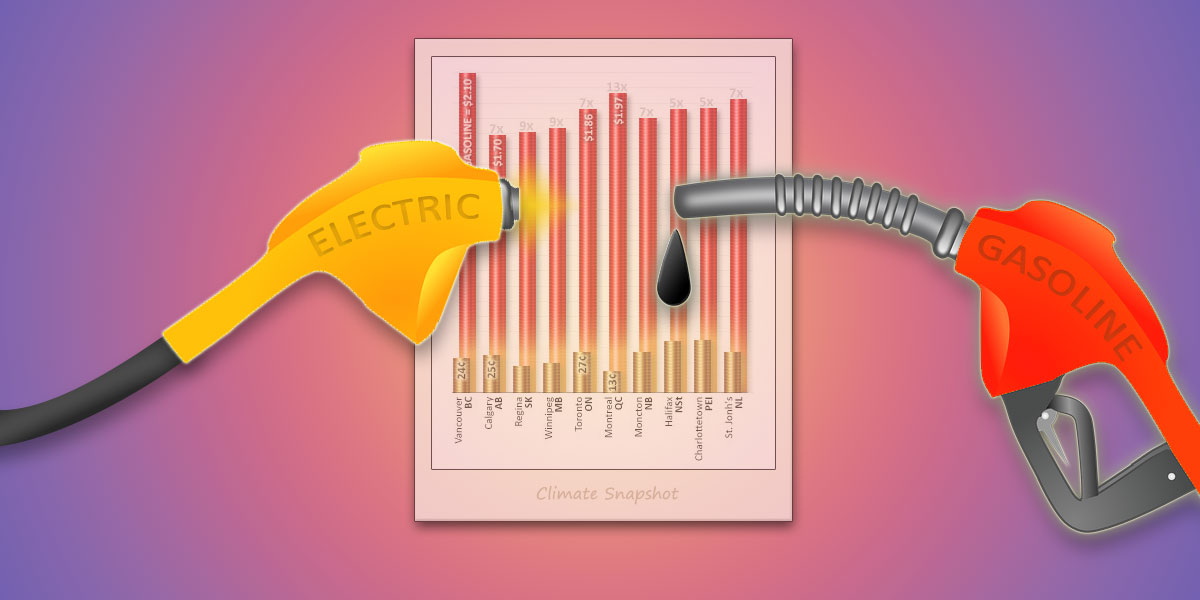 Columnist Barry Saxifrage breaks down how much it costs right now to power a car with gasoline versus electricity in cities across Canada. Graphic by Barry Saxifrage
Previous story
Next story

Gasoline prices are surging. That's forcing owners of gasoline-burning cars to pay a lot more to drive around. In some areas of Canada, gasoline now costs more than $2 a litre.

Canadians who own electric-powered vehicles (EVs), however, are filling up for less than 35 cents per "litre equivalent." The reason EVs are so much cheaper to fuel is because they only require a quarter as much energy to drive them around. A rough rule of thumb for comparing fuel prices is that two kilowatt-hours (kWh) in an EV provides the same driving energy as one litre of gasoline does in a gasoline-burner. (See the endnotes for all the geeky details.)

For example, the bars on the far left show that in Vancouver, it currently costs nine times more to drive with gasoline than with electricity. And since all of B.C.'s gasoline is imported, a lot of the money spent at the pump leaves the province. In contrast, filling EVs with made-in-B.C. electricity keeps those energy dollars and energy jobs in the province.

In many other cities — like Calgary, Toronto, Moncton and St. John's — gasoline currently costs seven times more to drive on than local electricity.

The biggest winners in Canada right now are EV drivers in Quebec. As the chart shows, charging an EV at home in Montreal costs around 13 cents per litre equivalent. Oh, and as a very nice bonus, Quebec's electricity is also 700 times less climate-polluting to drive on than burning gasoline. (Yes, 700 times cleaner … see endnotes for details.)

Despite electricity being many times cheaper and cleaner for Canadian drivers, only three per cent of the new passenger vehicles bought in Canada last year were all-electric EVs. That's five times fewer than the number Europeans bought. It's also fewer than Americans bought. It's even below the global average.

The reason our peers in many other nations are choosing electric over gasoline far more often is because their governments introduced policies that make EVs the better choice for them. These policies are helping their citizens lock in a future of lower fuel costs, less deadly air pollution and declining climate emissions.

If Canada's federal and provincial governments want to provide the same benefits to Canadians, they know how to do it. For example, Canada could adopt the policy package that has worked so spectacularly well in Norway — where 80 per cent of the new cars Norwegians buy now are all-electric EVs. If that northern oil-exporting nation can do it, surely ours can, too.

Analysis: Columnist @bsaxifrage breaks down how much it costs right now to power a car with gasoline versus electricity in cities across Canada.

I did some spreadsheeting.

I did some spreadsheeting. Based on some average driving figures I found (for Ontario) and the cost difference in BC (because I live in BC), the savings is currently $230/month for an average driver.
Looking at a loan calculator, I concluded that a 7 year loan (which is the length of my car loan) at 4% interest paying $230 a month would be a loan for nearly 18,000 dollars. So if you buy an electric car, the break-even point currently is if it costs nearly $18,000 more. Maybe only $15,000 in some other provinces where gas isn't quite as expensive--yet.

Electric cars' sticker price is somewhat more expensive still than an equivalent ICE car. But even without the federal $5000 subsidy, or some provincial ones, they're not $15,000 more expensive. If you're gonna buy a car, electric is currently the clear choice.

A view from suburban Toronto:

A view from suburban Toronto:

" If you're gonna buy a car, electric is currently the clear choice."

Only *if* you are fortunate enough to have a place to plug it in, which many - probably most - drivers do not. At this point, EV ownership is largely limited to middle/upper-class homeowners with private driveways and the money for their own charging station, or else who live close to a public charging station. Can you spell "suburbia"?

As for urban and suburban tenants (whether in houses or high-rises), or even condo owners in older buildings? Forget it. They will have to keep driving their gas-burners from one sprawling suburb to another, for as long as it is legal. Then what will they do?

The basic problem really comes down to almost 100 years of urban design that leaves people with little choice other than private-automobile ownership - one car per adult per household! - along with social pressure and enormous economic interests pushing relentlessly in that same direction. But I doubt that the 401 will be any more attractive a place jammed solid for hours with EVs than it currently is with gas-guzzlers.

Transparency time: I park my beloved 13-year-old Prius on the street, outside a neighbour's house. There is no outside power at the leased industrial building where I work, and no, I cannot work from home. The fifty-year-old high-rise where I own a condo apartment would be no better, even if I moved back in there. So there is no EV in my foreseeable future; if I ever do have to buy another car (and I hope I don't), it will likely be another Prius.

You are describing a common,

You are describing a common, but solvable problem. It is feasible to install public charging stations on streets where many people park. In the UK, there are experiments with making street lamp posts into chargers. Condos that have underground parking can install Level 2 chargers. Workplaces in colder areas of Canada already have plugs for block heaters which can be upgraded to Level 2. Subsidies will be needed, but this problem can be addressed. Level 2 chargers will charge any EV overnight. They need 220 V/ 30 Amp circuits which are not very big.

Another interesting figure from this table to discuss is, why are the hydro rates for Toronto double those for Montreal? Answer: Hydro generation in Quebec is mostly from water powered generation, which is much cleaner and cheaper than Ontario's gas and Nuclear powered generation. Do why doesn't Ontario buy its hydro from Quebec instead of it being sold to the U.S.? Also, if Quebec can generate hydro for do little, why can't B.C. and Alberta?