An ocean away, Canadian teens are helping their Ukrainian peers stay on top of their studies amid war 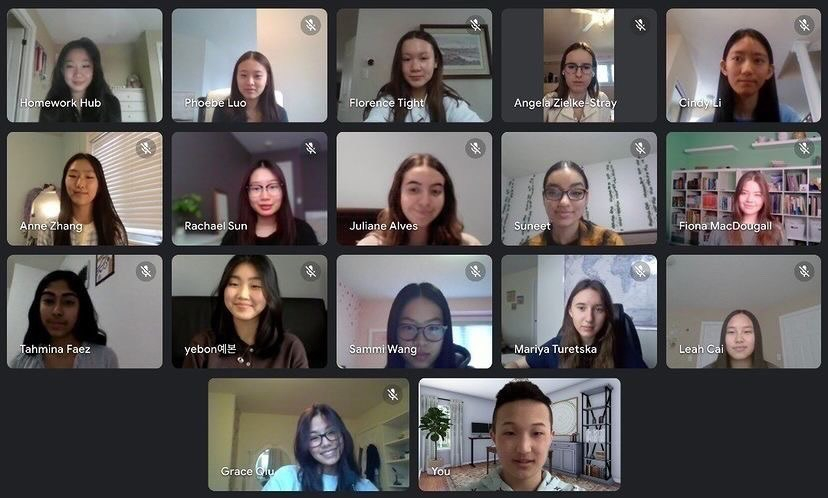 Paris Cai (top left) and My Chau Tight (top row, third from left) and other members of HomeworkHub meet online to plan their operations. Photo supplied by Paris Cai
Previous story
Next story

Soon after the Russian invasion of Ukraine began last month, the volunteers at an Ontario youth-led online tutoring project stepped up to help.

Around 50 or 60 young people connected with HomeworkHub, many of whom speak Ukrainian, have so far volunteered to help specifically with supporting the suddenly displaced students, who are mostly seeking help with English as they contemplate a life outside their country.

“We do have a pretty sizable Ukrainian population in HomeworkHub,” including one of the adult directors who helped them get incorporated, said Paris Cai, the founder of the student-led tutoring project.

The war has displaced millions of people in Ukraine, forcing the closure of schools and disrupting the learning of the country’s youth.

Some refugees are already starting to come to Canada, Cai said, with many more expected to arrive through the summer.

“The language barrier will be quite a big challenge for them,” the 16-year-old said. “We just thought we could give them an extra hand.”

The team is also connecting to young people still in Ukraine, she said, and while they don’t know much about their specific living conditions or exact locations, the team’s pairing manager said some are getting tutored while sheltering from bombardment.

“A lot of Ukrainians are in bomb shelters and from what we’ve gathered, a lot of them are seeking tutoring while they’re in the bomb shelter, I believe,” said My Chau Tight, a Grade 10 student.

Demand for the free service provided by student volunteers has swelled quickly since it launched earlier in the pandemic, forcing the team to create a waitlist that is now at least 200 students long.

The students behind HomeworkHub asked their volunteer tutors to help Ukrainian schoolchildren. Dozens have answered the call and more are needed to deal with the demand, its founder says. #RussianInvasion #Ukraine

The network is actively seeking additional student tutors and asking those already on board to consider taking on more than one tutee and to invite their friends to join them.

They are considering accepting adult tutors in the future and opening their program to adult refugees as well, Cai said.

The network now boasts some 1,500 students and tutors from across Canada and other parts of the world, including a surge of tutors from Indonesia.

‘The situation is brutal’: Toronto grad describes life in Ukraine during Russian invasion