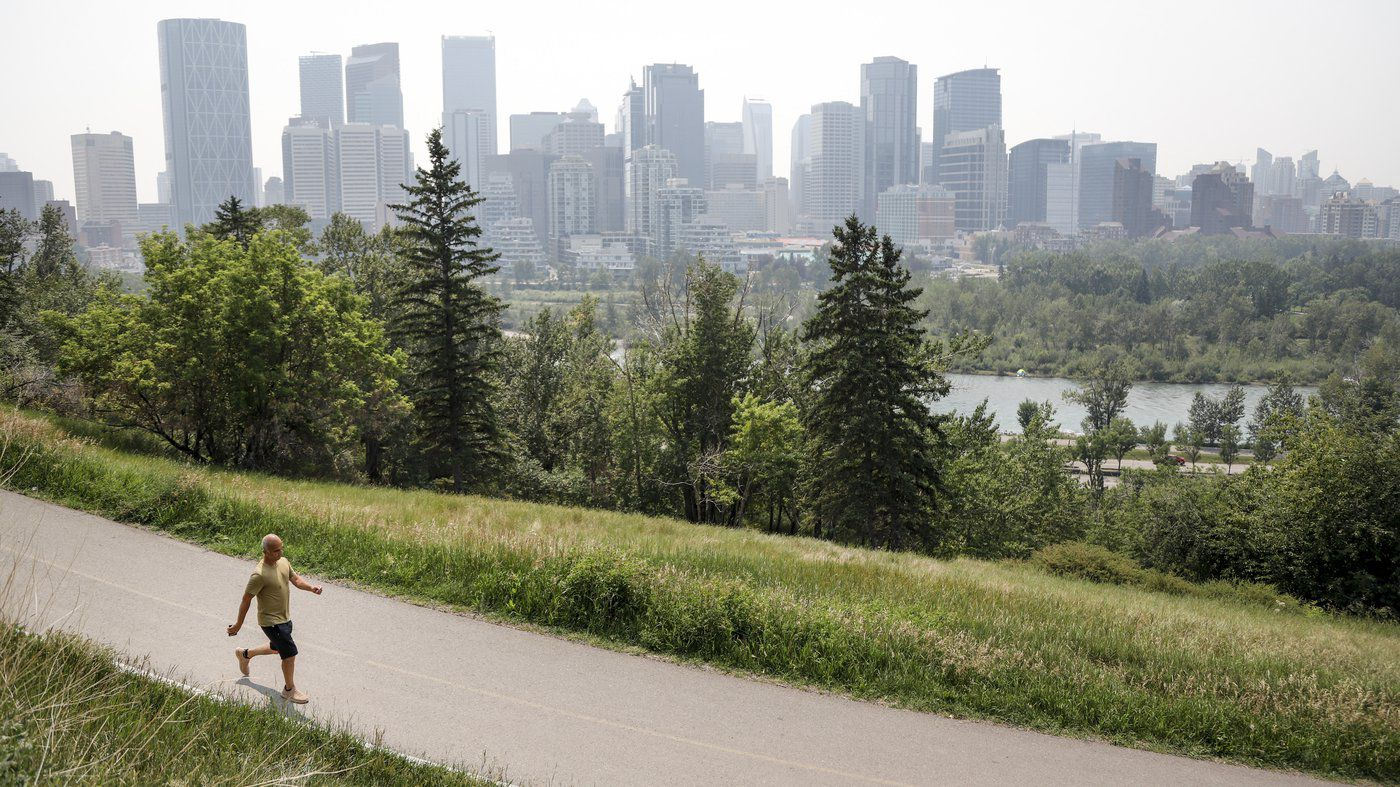 A haze of wildfire smoke from B.C. hangs over the downtown as pedestrian walks past in Calgary, Alta., on Thursday, July 15, 2021. File photo by The Canadian Press/Jeff McIntosh
Previous story
Next story

The record-breaking heat wave that scorched western North America last June was among the most extreme ever recorded globally, new modelling and analysis by researchers at universities in the United Kingdom shows.

The study published Wednesday in the journal Science Advances found just five other heat waves since the 1960s were more extreme, based on how far they surpassed average summertime heat over the previous 10 years.

The paper shows that extremes are getting hotter as temperatures rise with climate change, said Vikki Thompson, senior research associate at the School of Geographical Sciences and Cabot Institute for the Environment at the University of Bristol.

The study projects that by around 2080, heat waves like the one last summer could have a one-in-six chance of happening every year in western North America as the effects of human-caused climate change worsen.

The projections are different depending on whether global climate change is contained, Thompson said in an interview Wednesday.

"We do also include the lower emissions scenarios in our extra data so people can see, if policies do change, where we could be instead," she said.

"And that's a much better picture, it would still be a one-in-1,000-year event by the end of the century, if emissions were reduced."

The study cites the example of Lytton, in British Columbia's southern Interior, where a national temperature record of 49.6 Celsius was set on the day before a fast-moving wildfire destroyed much of the community.

B.C.'s coroner attributed nearly 600 deaths to the heat from mid-June to August, with 526 deaths in just one week between June 25 and July 1.

The U.K. researchers looked at daily maximum temperatures between 1950 and 2021 during two weeks of extreme heat, from June 24 to July 6, over an area spanning Vancouver, Lytton and south into the U.S. Pacific Northwest.

That area was chosen because it was the hottest within the larger area of western North America that felt the heat wave, Thompson said.

The study found the greatest average daily high temperature over those seven decades was 39.5 C on June 29, 2021. In the 10 years before that, the average high for the three hottest months of each year was 23.4 C, it says.

The extremes in daily temperatures in that region last summer were "so far beyond that range, that was quite exceptional," Thompson said.

To understand the heat wave in a global context, the researchers examined 230 regions around the world, including B.C. and Alberta. They compared the hottest temperatures recorded on a single day all year with the average over the hottest three months annually over the previous decade, Thompson said.

The temperature recorded in Alberta on June 30, 2021, is listed as the sixth most extreme heat since the 1960s, with a maximum temperature of 36 C.

The daily high of nearly 50 C in B.C. was much hotter, but it wasn't as far outside normal because the province had a higher baseline temperature than Alberta, Thompson said. The baseline in Alberta was 22 C, she added.

A combination of high atmospheric pressure and drought conditions in much of western North America helped drive the heat wave, the study says.

To gain insight into future heat waves, the researchers used Earth systems modelling that projected events of similar intensity in the same area.

"We can look into the future and see how much more likely it is in 100 years' time, and the model that we use suggests that it will happen one-in-six years, in 100 years' time, so every decade we'll be expecting a heat wave that extreme," Thompson said, referring to temperatures in western North America.

The researchers used a worst-case scenario for climate change, she noted.

"Thinking about the possible impacts, we want to know how bad it could be."

People who have experienced extreme heat before are likely to be better prepared to protect themselves if it happens again, Thompson added.

This report by The Canadian Press was first published May 4, 2022.