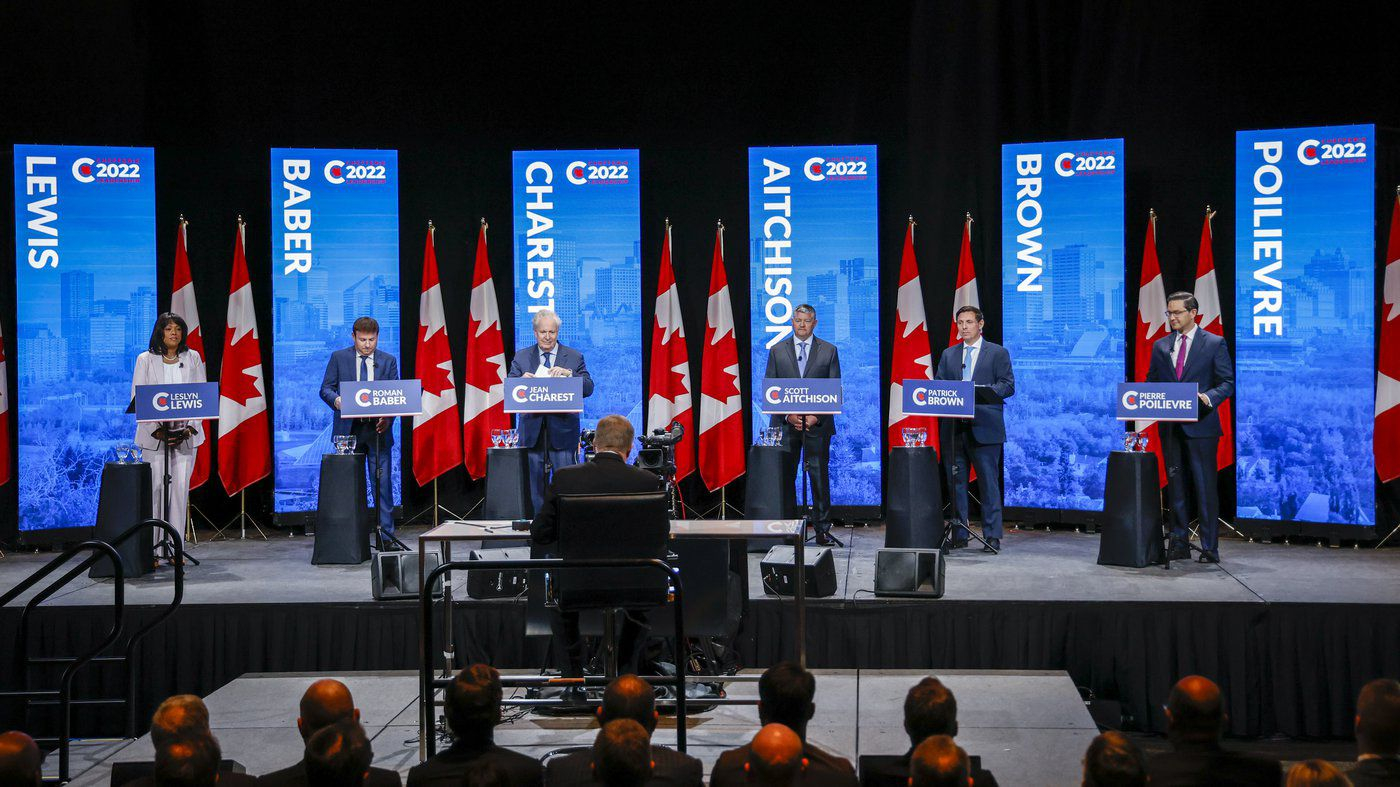 As federal Conservative leadership candidates travelled to Alberta this week, they arrived in a fractured Tory heartland.

Alberta Premier Jason Kenney, who won a majority government in 2019, leading the newly formed United Conservative Party to victory over the NDP, is awaiting the results of a membership review, where ballots to be counted next week will determine his fate as leader.

Those ballots were due Wednesday, roughly an hour before the six candidates competing to lead the federal Conservative Party of Canada took to the stage in Edmonton for a debate in a contentious race.

So what, if anything, can those vying to become the next federal Conservative leader take away from their Conservative counterparts in Alberta?

Vitor Marciano, a longtime Conservative now assisting UCP MLA and Kenney rival Brian Jean, said one major lesson is: Be prepared to design a team that listens to caucus.

"We never ask these questions, but they actually end up being incredibly important."

Caucus management has proved challenging for Kenney and was ultimately fatal for Erin O'Toole, the last federal Conservative leader.

O'Toole was voted out by a majority of his 118 MPs in early February after losing last year's federal election. His ousting followed months of frustration brewing within caucus over his reversal on key Conservative policies, like his unexpected embrace of carbon pricing.

O'Toole also earned backlash over his attempts to moderate the party's image and efforts to balance the party’s opposition to COVID-19 vaccination mandates while encouraging people to choose to roll up their sleeves.

The pandemic has also pushed Kenney's leadership to the brink. He saw MLAs speak out against COVID-19 restrictions. Some have called on him to resign, while critics say he leads with a top-down approach, which has alienated the grassroots.

Recently, the embattled premier mused that he's been too tolerant of open dissent.

Evan Menzies, a former director of communications for Alberta's UCP, says the biggest takeaway for Conservative leaders is that the pandemic has proven to be a "politically explosive" time. Supporters have been personally affected — and divided — by many decisions made by the government, a system Conservatives treat with skepticism.

While Kenney endorsed O'Toole in the 2020 leadership race, he told reporters while in Ottawa last week he hasn't done the same so far in this contest.

For several years, the country's conservative movement as a whole has been home to much division, said David Egan, the former president of a federal Conservative riding association in Edmonton and a UCP candidate in 2019.

He pointed back to the 2017 federal Tory leadership race where, after losing to Andrew Scheer, former Conservative cabinet minister Maxime Bernier left to found the People's Party of Canada, a more populist and right-wing alternative for unhappy Tory voters.

Scheer then resigned after his 2019 federal election loss, where he was dogged by his social conservative values. O'Toole himself was only in the job for 18 months before the party entered its third leadership contest in six years.

With nearly all pandemic restrictions lifted and the economy rebounding, Egan is hopeful things improve. He said while leadership contests can reveal divisions, it's also a chance for Conservatives to energize their base, bring in new members and generate buzz.

One name Egan keeps hearing is that of longtime MP Pierre Poilievre, whose rallies have at times pulled in crowds by the thousands.

"This is a movement, almost, that I've never seen before in politics," the 34-year-old Alberta Conservative said. "This is just the nomination. We're not even in a general election yet."

Menzies also noted Poilievre's rallies as one reason he feels hopeful for the movement.

One thing Marciano said he finds "deeply concerning" about the state of the Conservative race is the tone of attacks being lobbed not just between fellow candidates, but between members of their campaign teams.

While leadership races can be divisive, he said afterwards "the secret becomes how to get all of the talent back into the tent working in the same direction."

"(Candidates) should be crystal clear that they're going to tell their staff that there are no sore winners," he said.