Alberta’s cuts to firefighting are a form of climate denial 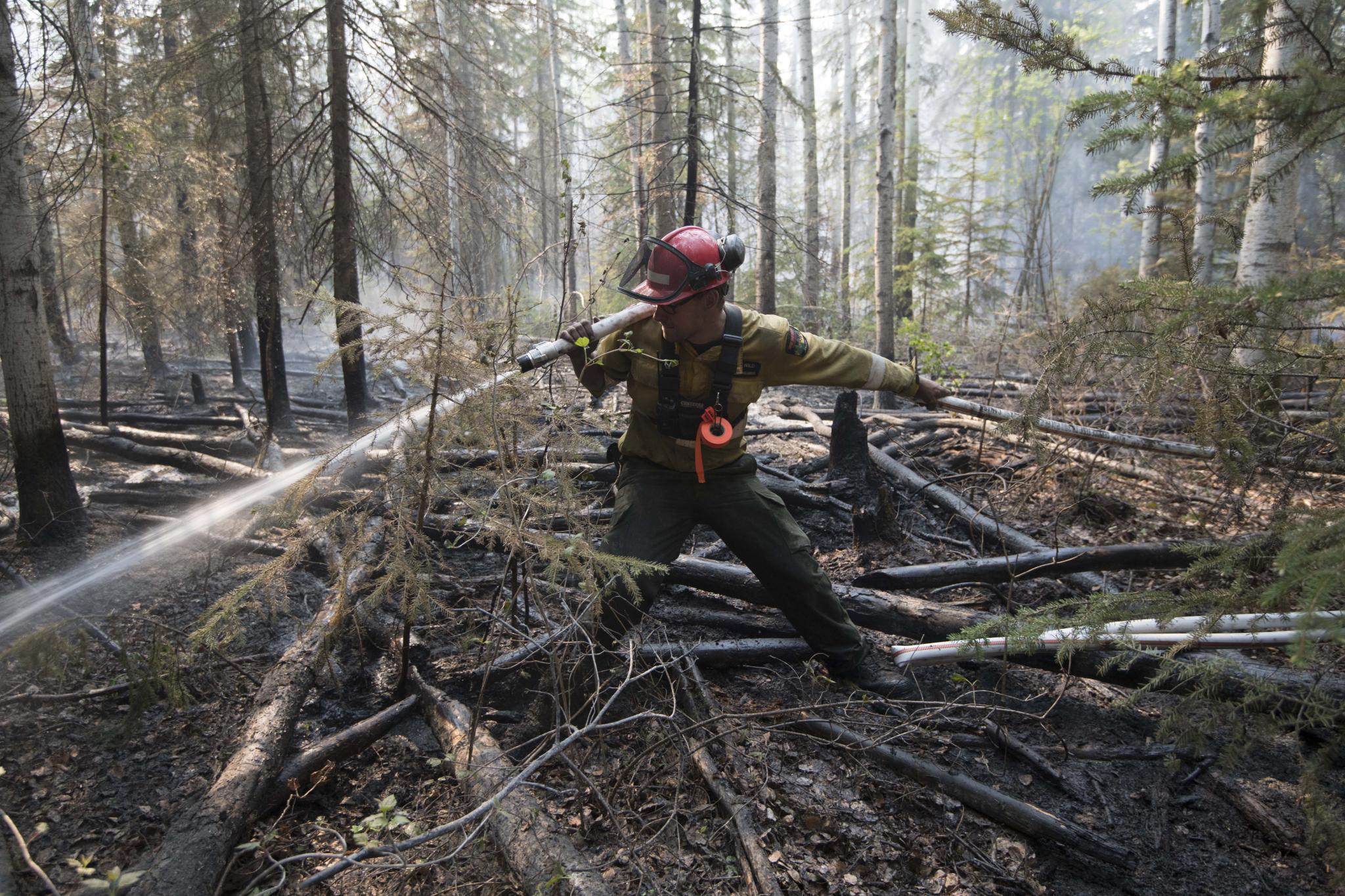 A firefighter extinguishes hot spots beside Highway 35 just south of the town of High Level on May 25, 2019. Alberta has cut eight to 12 per cent of the budget — with 68 fewer firefighters on staff. Photo by Government of Alberta/Flickr (CC BY-NC-ND 2.0)
Previous story

Every year, the fires get worse. If you live in Alberta, it’s impossible to ignore.

Summer skies can be thunderstorm-dark for days on end, the air smells of charred wood from forests burning hundreds of kilometres away. The climate emergency is real and deeply felt.

While wildfires occur naturally, their growing intensity is a product of climate change. Wildfires are going to get worse in the coming years, even in a best-case scenario.

Preparing for worsening fires needs to factor into any government’s plans for long-term climate change adaptation. The Alberta government is doing the opposite — shortening its designated fire season by quietly cutting the size of its firefighting force, while trying to hide those cuts from the public.

Typically, Alberta’s fire season begins March 1 and ends Oct. 31, but this year, the government has shortened the time it will have seasonal firefighters available to four months. It amounts to a cut of eight to 12 per cent of the budget — with 68 fewer firefighters on staff.

Cuts aren’t the only problem. Dozens of positions remain unfilled because the government was late sending job offer letters.

Experienced firefighters have found work elsewhere, in other jurisdictions or fields. Wildfire fighters must get training before they can be sent to battle blazes, but the training program is also running late. Front-line workers say that training might not be complete until June, over three months into fire season.

Alberta’s fire season sees a lot of danger early in the season. The Fort McMurray wildfire started on May 1, 2016. It destroyed 2,400 homes and forced nearly 90,000 people to flee. It was the costliest disaster in Canadian history, with damage estimated at nearly $10 billion.

In 2019, there were 301 fires that began in May and three major wildfire incidents. By the end of that month, a total of 883,414 hectares had burned. There is no evidence this year’s fire season will be any milder.

Despite occasional denialist rhetoric from elements of the governing United Conservative Party, the Alberta government knows climate change is real and is affecting our forests and the fire season. The government has the evidence, but it’s chosen to ignore it. It’s irrational and a frightening model of how governments may choose to lapse in their responsibilities to the population as climate change accelerates.

After Alberta’s devastating 2016 fire season, the government ordered an analysis.

The subsequent report noted “a review of historical dates and trends indicates that the fire season in Alberta is becoming longer, is starting earlier and is featuring more frequent periods of extreme weather.

“Historical data indicates that Alberta now experiences the most wildfires in May and more forest area is burned in May than any other month.”

Mike Flannigan, a wildland fire professor at Thompson Rivers University, told Global News Calgary in March: “We expect longer fire seasons, more fire, higher-intensity fire in the future as we continue to warm. It doesn’t mean every year is going to be bad, but on average, we are going to see a lot more fire.”

He warned against expecting late snowfalls or rainfall to reduce the risk. “Even a few days after a rainstorm, things are ready to burn.”

In British Columbia, the epicentre of the growing fire crisis in the West, the government is recognizing the effect of climate change and is transforming its wildfire service to include a year-round workforce.

In Alberta, Agriculture, Forestry and Rural Economic Development Minister Nate Horner has said he was confident about this wildfire season and the department was “flexing up at a great rate.”

His press secretary Mackenzie Blyth added: “Like any other year, in the case of an extraordinary wildfire season, Alberta Wildfire can request additional resources and specialist assistance from partner agencies across Canada and internationally when required.”

Help from other provinces and countries is normally an emergency measure for when fires get out of control — we need proactive infrastructure that maintains readiness.

The only way to do that is to have trained firefighters at the scene early to snuff out fires when they are controllable. And those are exactly the firefighters the UCP government has chosen to eliminate.

Opinion: The Alberta government is gambling the province's wildfire season will be short and mild — a gamble that puts homes, communities, industry and jobs at risk, writes Mike Dempsey @Maytheforest. #abpoli #ableg #cdnpoli

Large and worsening wildfires are an unfortunate reality in a warming world, but we can lessen the risk to front-line communities. To do so, we need to reinvest in the public services that can mitigate the danger we know is coming.

Mike Dempsey is a vice-president of the Alberta Union of Provincial Employees, which represents wildland firefighters in Alberta.

We have possibly passed the

We have possibly passed the point where changing our forest management practices would mitigate wildfires. That should have started 50 years ago.
Cutting the fire-fighting budget is absolute confirmation that wildfire fighting is a lost cause.
Changing the nature of forest management? too little, too late?
The timber felling, the pulp wood industries are dying on their feet, we have to find a replacement for papermaking; we have to change our residential housing structures to adobe? to rammed earth? to stacked worn out tires? to field stone, to quarried rock?
Cave dwelling anyone?