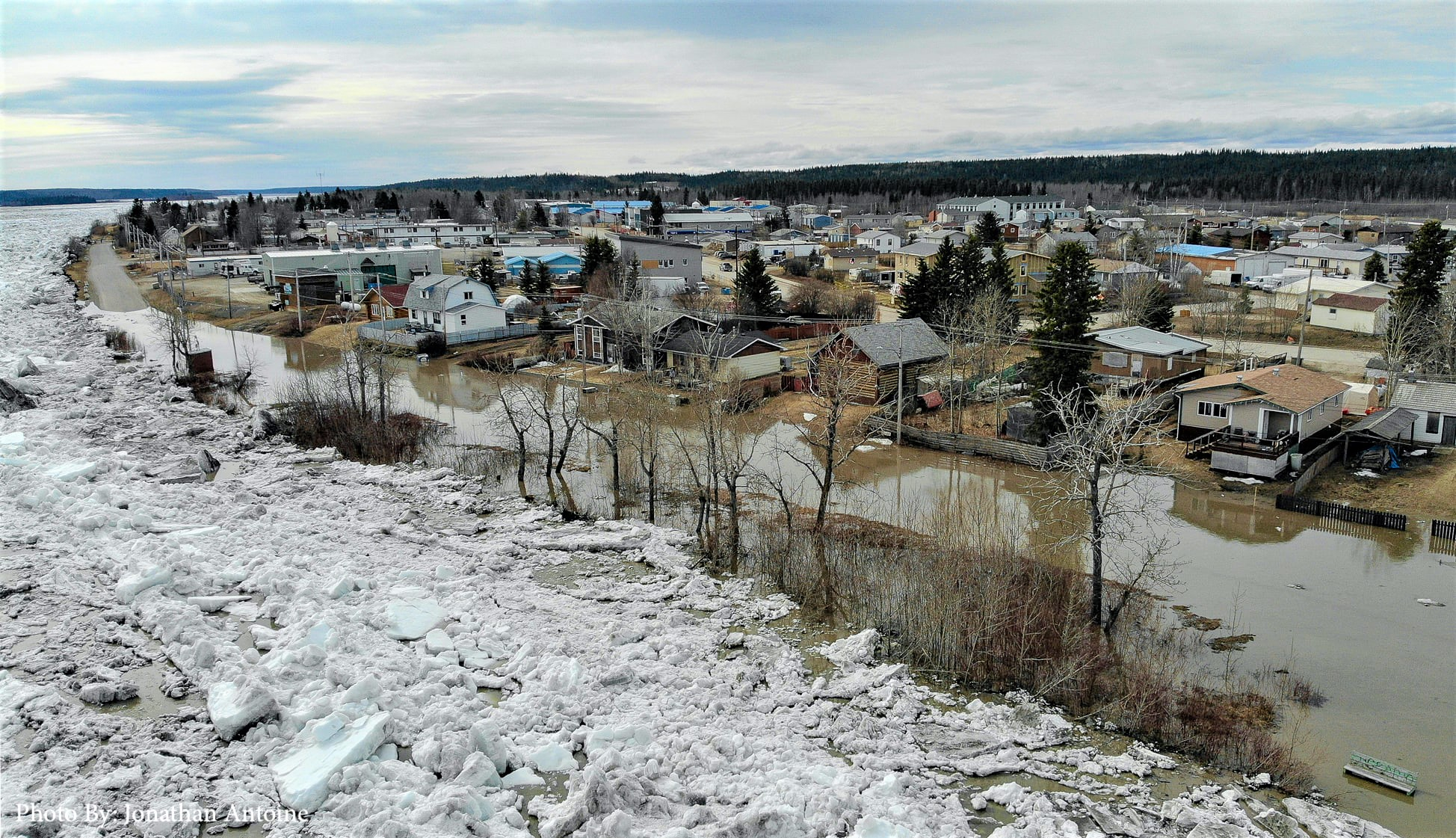 Cheryl Cli’s house is so new, it’s still in the packaging.

The modular build sits on a muddy lot on safe, high ground about five minutes outside of Fort Simpson, N.W.T. Some of the industrial plastic is ripped away, revealing its cherry red siding.

On this April day, the air smells of meat and veggies cooking over an open fire. Cli is having a cookout with friends and family to “claim” the lot. Earlier in the week, she noticed some firewood had been taken. “It’s OK, they probably needed it,” she says.

Workers are installing the sewer tank, one of the many jobs left to do before Cli can occupy the house. Throughout the evening, the conversation turns to last year’s historic flood and the devastation it brought to the community. One year after the disaster and not a single Fort Simpson resident waiting on a new home has moved in.

In May 2021, Canada’s longest river breached its banks and flooded several communities in the Northwest Territories, including Fort Simpson. Traditionally known as Łı́ı́dlı̨ı̨ Kų́ę́ (“place where rivers come together” in Dene Zhatıe), most of the 1,200-person community lives on an island where the Liard River flows into the Mackenzie (Deh Cho). Those mighty waters brought hunks of ice the size of small cars into people’s yards, filled some homes up to the cutlery drawer and displaced nearly a thousand people.

The initial plan was to send residents to Yellowknife, but the capital was in the middle of a massive COVID-19 outbreak. Instead, residents were scattered among much smaller communities like Fort Smith, Fort Providence and Norman Wells. The few who stayed behind spent nearly a week without power. Food rotted and nights were cold as temperatures dipped below zero. Cli, like hundreds of others, set up a canvas tent on higher ground outside the community.

Cli lived in her late mother’s “mouse-infested” house along the riverbank on and off for years before moving into public housing in July 2020. Before the flood, she’d been salvaging materials to build a new house on her mom’s lot. She tried going to the old house to reclaim family mementos before evacuating but never made it.

Mackenzie Drive, as the name suggests, runs along the river, atop the 10-metre bank. The road was washed out as the water climbed to 16 metres at its peak — breaking a record set in 1963. Cli’s first thought at seeing the water encroaching into town was her mother’s sewing projects submerged.

Last year's floods were life-altering for the 1,200 people of Fort Simpson, N.W.T., most of whom live on an island. Eventually, one senior administrative officer predicts, everyone will have to move. #ClimateAdaptation #Permafrost

“I was upset with myself for not being more prepared,” she says. It took days for the water to recede and not being able to see the damage was “almost unbearable.” She later came across aerial photos that showed only the roof of her mother’s house above the water. Realizing nothing could be saved brought its own sense of relief. “I could be more realistic about what to expect afterwards rather than not know and be hopeful,” she says.

When a disaster hits, the Northwest Territories’ Disaster Assistance Policy (DAP) kicks in. While the policy is currently under review, last year’s iteration allowed reimbursements for repairs and “essential items” of 80 per cent of the assessed damage, up to a maximum of $100,000. Money for the DAP comes from a disaster financial assistance arrangement with the federal government. The N.W.T.’s claim from last year totalled $40 million in response and recovery costs across four communities. The government says it does not yet have a final price tag, but it includes the cost of 18 replacement homes, half of which are in Fort Simpson.

Bernadette Norwegian and her twin sister Bertha, longtime Fort Simpson residents, are waiting for one of the new houses. The sisters are artists and lost almost all their possessions in the flood, adding extreme stress on top of ongoing health issues — Bertha has late-stage cancer. Losing everything felt “insurmountable,” says Bernadette.

The sisters were compensated for items deemed essential but got nothing for the loss of their most precious items: documents, artwork and antiques. The N.W.T. government is clear: the DAP is not an insurance program. So a $600 original copy of Percy Bysshe Shelley poetry, 40 Bibles and two lifetimes’ worth of art from paintings to poetry have all been deemed worthless. In losing these items, “we lost a lot of who we are,” Bernadette says.

Once they move into their new house, Bernadette hopes people will share pieces of the sisters’ art so they can rebuild a personal archive. A few days after our conversation, I found one of Bernadette’s poems called The Shawl and sent it along.

The twins are adamant about their desire to return to their lot on the riverbank. Their new house, like Cli’s, is built atop five-foot wooden stilts on an elevated gravel patch. Bernadette is confident in the engineers’ assurances they won’t be flooded again. Besides, she says, “you couldn’t ask for a better view.” But it’s taking longer than expected to move back.

A year after the flood and the twins are still living in temporary accommodations. Lorie Fyfe, the N.W.T.’s assistant deputy minister of disaster assistance, says the delays have been caused by supply chain issues and contractors hiring small crews to put final touches on all the houses. She also says the process took longer because the government wanted homes that can withstand the northern climate. Despite all the setbacks, “we can move forward being bitter and resentful or thankful,” says Bernadette.

To be eligible for DAP, the damage has to be to a person’s primary residence. Cli says she fought to prove the home she was building on her mother’s property was going to be her primary residence. When assessors came in, they valued her mother’s old house for damages, so Cli’s new home is meant to replace that one, not the bigger house she was building.

While she’s excited to move into her new place, deciding to leave her mother’s lot was not an easy decision. Cli spent extended periods on the land, learning Dene language, culture and traditions. Her mother’s home represents that upbringing in the bush. “It was a place our family came to when we were coming off the land,” she says. Moving makes Cli feel like she’s “leaving the spirit of my family there.”

The flood allowed Cli to leave public housing sooner and get a new home in the part of the community safest from future floods. Like Bernadette, she’s thankful for the positive outcome, but in comparing her situation to others — including family still struggling with repairs — there’s a guilt that gnaws at her. Holding back tears, she says, “I don't know where that comes from because it's not a bad thing to see people succeed … despite where that success came from, it's a silver lining.”

Scientists say the community is wise to prepare for future flooding as climate change worsens, causing permafrost to melt.

Bill Quinton is a professor and permafrost researcher at Wilfrid Laurier University who has been running the Scotty Creek Research Station, 50 kilometres south of Fort Simpson, since 1999. He explains that permafrost, a mix of soil and ice, raises the ground above it and creates natural retaining walls for surface water. That water then either evaporates or seeps into the landscape more slowly.

With permafrost melting across the North, more snowmelt and rainwater is making its way directly into streams and rivers. That doesn’t automatically lead to flooding, says Quinton, but with climate change, it’s likely to be an ongoing contributing factor. Last year’s flood, he adds, was the result of many of these factors coalescing, including cooler weather and higher-than-normal water levels pre-flood.

Ice jams, which happen when temperatures climb quickly, sending snowmelt into frozen rivers, are the cause of most large-scale floods in the territories. While water levels are not as high as last year, lingering cold temperatures have delayed breakup again — Fort Simpson experienced its third-coldest April in the last 35 years. The Mackenzie River broke up along the community last week; water climbed to about 10 metres, but there has not been any flooding.

In the long run, most Fort Simpson residents will need to move off the island — an endeavour that will take decades, says Kevin Corrigan, the village’s senior administrative officer. Planning, zoning and setting up the nine replacement homes alone, he says, was a “monumental task.” And then there’s the cost. The village’s water treatment plant sits on the riverbank and moving even the intake line will cost millions, he says. The plan for now is to wait out the lifespan of current infrastructure, like the recreation centre and schools, and build anew off-island later.

Until then, Mayor Sean Whelly says there isn’t much support for communities trying to invest in risk mitigation. “The territorial government, although they like to help you plan around disaster risk management, they don’t have money to give you to actually do the work,” he says.

Fyfe says the support mainly comes from staff helping communities access federal funding. That means designing projects that incorporate disaster mitigation. The challenge as a small municipality, says Whelly, is that investing in risk mitigation takes away from other day-to-day needs like road maintenance. “We would be investing in fighting Mother Nature when we know we’re probably going to lose in the long run,” says Whelly.

Community leaders say they learned a lot from last year’s disaster and people will be better prepared if it happens again this spring. As temperatures start to climb, everyone is keeping an eye on the rivers. “This is something that’s permanently on the radar for Fort Simpson now,” says Whelly. “You can't let your guard down.”