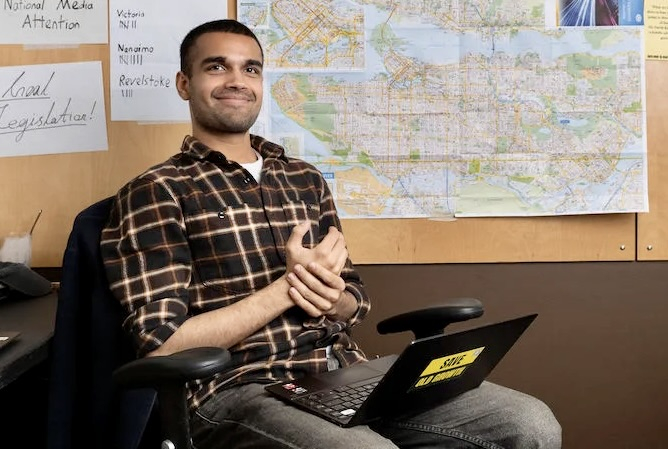 An international student leading a controversial civil resistance campaign to end old-growth logging in B.C. is fearful the Canada Border Services Agency is looking to deport him.

Zain Haq, a co-founder of the Save Old Growth (SOG) protest group behind a recent series of highway blockades across the province, has been ordered to show up at a CBSA office.

The third-year history major at Simon Fraser University who hails from Pakistan is in Canada on a study permit, a document issued by Immigration Canada.

The 21-year-old activist has gone into hiding after talking to a number of lawyers who advised him it’s likely CBSA wants to detain him. He has yet to find a lawyer who will represent him.

“Basically, what all of them suggested to me was that I should pack light and be prepared to travel,” Haq told Canada’s National Observer on Thursday.

Ultimately, Haq is worried CBSA intends to deport him because of his activist work.

“It’s my suspicion and other people's suspicion that it’s due to political reasons,” he said.

“I’m feeling very anxious because it's very rapid. It’s a lot to actually process and work with.”

Some conditions for obtaining a study permit include obeying the law and the absence of a criminal record.

The SFU student has been arrested 10 times for acts of civil resistance at various climate-related protests since 2020.

“I think political persecution is going to be common if you're going to be on the right side of history," said international student Zain Haq, a #SaveOldGrowth leader who's worried Canada Border Services is looking to deport him.

And on Feb. 15, he was sentenced to two weeks in jail for criminal contempt of court after violating an injunction involving the Trans Mountain pipeline expansion (TMX).

He was also fined $1,500 in B.C.'s Provincial Court for his involvement in an Extinction Rebellion protest against TMX on Nov. 27 that blocked a Canadian National Railway line in Burnaby.

And he’s currently facing five charges of mischief, he said.

But despite being locked up for contempt of court, Haq doesn’t believe it technically results in a criminal record.

CBSA officers visited his apartment twice early this week when he wasn’t there, Haq said.

In the first instance on Monday, CBSA officers left a letter for him with his roommate ordering Haq to attend the border agency offices the next morning or risk arrest. They returned again the following day.

Haq said he didn’t see the letter until the morning in question and had no time to respond or seek legal advice.

The threatening letter did not provide any information about why he was being told to attend the border agency.

The CBSA summons occurred the same day Save Old Growth launched its recent campaign pledging a rash of road blockades in June.

There’d been no prior phone calls or letters before agents suddenly knocked on his door, he added.

Haq will try to avoid contact with CBSA until he can finish preparing along with SOG organizers for his possible deportation. But he also intends to present himself to the border agency once he's obtained legal counsel.

“Because I’m one of the central co-ordinators, this is a really bad time for this to happen,” he said.

“It's really important that our mobilization doesn't collapse.

“So, I’m just trying right now to figure out what the plan is for me potentially not being in the city.”

However, the agency has a legal obligation to remove all foreign nationals and permanent residents who violate the Immigration and Refugee Protection Act (IRPA), Purdy wrote.

But before taking any enforcement action, CBSA reviews all relevant factors related to a case in tandem with IRPA violations outlined in sections 34 to 42, she said, noting cases that involve safety and security issues are prioritized.

“All individuals who are subject to enforcement action by the CBSA have access to due process and procedural fairness,” she said.

“Those being removed have either exhausted, or chosen not to pursue further legal recourse and have no legal right to remain in Canada.”

But Haq questions whether his activities to emphasize the gravity of the climate catastrophe should be deemed illegal while governments' failure to act in the global emergency is not.

“Our framing is that the illegal activities are being conducted by the government, and we're trying to do something about it.”

He acknowledged there’s a measure of risk for anyone who takes part in civil disobedience movements.

“Other people stopped caring about their status, their jobs and their careers to enter resistance and risk arrest,” Haq said.

“Putting ourselves in harm's way is how we maximize the likelihood of success,” he said, adding SOG’s fearlessness has made it possible to attract and mobilize a large number of people.

The dangers of the accelerating climate crisis are greater than any individual personal risk, he said.

“We’re faced with mass starvation and extreme likelihood of societal collapse over the next few years.”

The 21-year-old activist said he could face political persecution if he is indeed deported back to Pakistan.

“It’s very likely because I'll obviously be engaging in similar activities if I go back, and that could obviously lead to my imprisonment, or worse,” Haq said.

“Whether I’m in Canada or back home, I think political persecution is going to be common if you're going to be on the right side of history.”

This story was updated to include Haq's intention to meet with CBSA once he has legal representation.

This story was updated to include comment from Canada Border Services Agency (CBSA).

A resident of Pakistan, a

A resident of Pakistan, a nation that continually flirts with autocracy, military rule, civil violations of human rights, and other assorted anti -social behaviour; who is in Canada on a Student Visa should probably claim asylum. Should he be deported to Pakistan there is no doubt he will be detained, interrogated and likely disappear into Pakistan's notoriously violent judicial system.

Pakistan's leaders are always very intolerant of civil agitation, (unless promoted by themselves) as well as being perilously close to being a failed state, incapable of the stable administration of principles of law, order, justice or good governance.

Canada's power structures (dominated by the influences of multi national and law evading corporations) are increasingly reactive to civil disobedience and intolerant of any disruption to the workings of predatory capitalism.

One could never meet a finer,

One could never meet a finer, more dedicated young man than Zain. A saner Canada would be proud — and wise — to host him and offer him a PR card.

On the other hand, I am constantly astounded at how much time, money, and energy our governments are willing to dedicate to keeping our path straight to hell (first) and (then) extinction clear of any and all "obstructions."

Mr Haq’s extreme idealism requires notions of forest ecology so fantastic that they ultimately must deny any political process and the rule of law, in addition to arbitrary revision of basic biology.

He might have duped an increasing number of proselytizes into believing his upside-down theories of forest growth and carbon sequestration (which is part of the larger phenomenon of misinformative propaganda enabled by social media), but his statement that, “putting ourselves in harm’s way is how we maximize the likelihood of success” is flat-out fantasy.

Promising to repeat illegal disruptions, as Mr Haq does, unsurprisingly attracts the attention of legal authority, but it has had no discernible salutary effect. For example, saving Fairy Creek old-growth began as something most people could understand and get behind: preservation here had its own logic since this forest exists in one of the last, unlogged, whole drainages in the region; but as that original movement was usurped by radical activists (like Mr Haq’s SOG) demanding the immediate cessation of all OG logging in all of BC,—based on the totally cocked-up notion that OG will absorb incredible (in fact, impossible) amounts of atmospheric CO2—the radicalized occupation had exactly the opposite effect of Mr Haq’s prognosis: in tandem with protests on the ground, a vigorous campaign to demonize John Horgan for being at once the Premier of BC and the MLA for the riding which Fairy Creek is located was propagated widely in sympathetic but misguided progressive publications; however, when Horgan was granted an election during which campaign climate-change and old-growth logging (notably including Fairy Creek) were prominent issues, his government went from an extremely thin minority (supported by the Greens) to a convincing majority. And Horgan scored highest marks for popularity among all premiers.

No wonder Mr Haq concludes that radical activism and impossible demands stand their best chances of success by way of extra-legal, nonpolitical, and undemocratic or unpopular means. When put to any of those three tests, his prescription fails.

The authorities’ interest in Mr Haq —who is not a Canadian citizen—is not about the rationale, such as it is, for his activism, but rather because that activism has been, on the ground, against the law. In fact, the way it’s perpetrated would be illegal no matter what the cause or what rationale motivates it.

I’m starting to take a dim view of self-proclaimed progressive publications indulging in these kinds of narratives which portray protesters doing dangerous and illegal things as somehow tragic heroes, which give their biased or disingenuous rationales the credence of gospel, and paint law enforcers as mercenary victimizers in the employ of an evil cabal of elite politicians. That’s the stuff of tRumpublicanism— the kind of bull that puts all of us in harm’s way and definitely decreases our chances of success at anything.