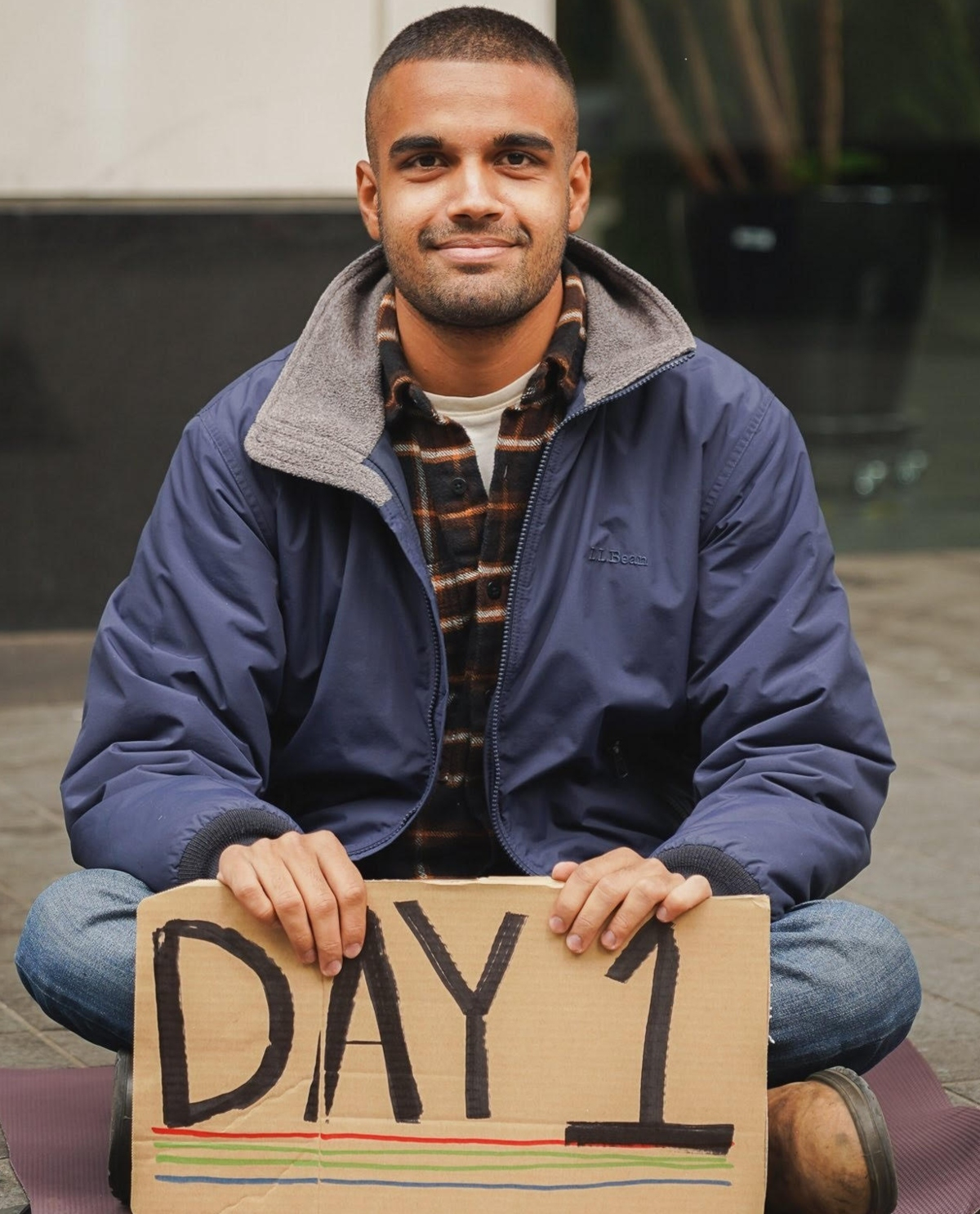 Zain Haq on the first day of his hunger strike to save B.C.'s old-growth forests from logging. Photo supplied by Zain Haq
Previous story
Next story

Zain Haq believes the climate crisis is so grave and so urgent, it is his duty to put his freedom on the line.

Since 2020, this 21-year-old history student at Simon Fraser University has been arrested 10 times for his participation in non-violent civil disobedience aimed at obstructing climate change-causing corporate activity.

On Feb. 15, he was sentenced to two week in jail for breaking an injunction against the Trans Mountain expansion (TMX) pipeline.

Tell us about your decision to participate in civil disobedience.

In 2019, I was becoming increasingly concerned about the gravity of the climate crisis and disturbed by the failure of governments to limit the corporate activity that is causing it. By chance in October of that year, I read about the Extinction Rebellion plan to occupy Vancouver’s Burrard Street Bridge for the entire day. I participated and was inspired by the organized energy and commitment.

Since then, I have participated in many demonstrations, designed some campaigns, and frequently engaged in peaceful, non-violent civil disobedience. Governments are showing they are not prepared to protect us from the corporate greed that is bent on annihilating the human race or listening to the public who support real action on climate change. I am acting out of desperation.

What is your current focus?

I participate in peaceful civil disobedience highway disruptions as part of the Save Old Growth campaign, intended to force an end to the logging of old-growth forests in British Columbia, which continues despite government policy, strong public support and calls from the major Indigenous groups that it end. This is an emergency. We cannot destroy the natural carbon sinks that exist. All the petitions, letters, visits to MLA offices, phone calls, and supportive media have not ended it. Those of us who disrupt the economy, and the lives of people who are inconvenienced, believe that the scientific evidence compels us to act.

Do you worry about public backlash?

Civil disobedience has been an essential part of many social change movements, but it must disrupt if it is to be effective. It is not our purpose to disrupt. Our purpose is to create a profile so large that it cannot be ignored. It is very unfortunate that people are inconvenienced and I accept this will mean some do not like us. But remember that at the time of his assassination, Martin Luther King Jr. had a 75 per cent disapproval rate. The moral arc of the universe does bend towards justice, but sometimes doing the right thing means you are unpopular for a while.

What other kinds of civil disobedience have you used?

After SFU350 argued persuasively that the board of Simon Fraser University should divest from all fossil fuel investments, the board made it clear it was not intent on changing anything. On Oct. 1, 2021, I and a fellow SFU student notified the board that if it did not divest within one month, we would begin a hunger strike. Four hours after we started on Nov. 1, the board agreed to divest. I would assume its members knew they could choose between really bad or really good publicity. I am glad they chose to do the right thing. I knew I could go on a long strike because just a few months before, I did a seven-day hunger strike for old-growth with two other people.

You are being sentenced for your alleged protests against TMX, but its construction is still going on. You have been arrested multiple times for protesting the logging of old-growth. What gives you hope?

I am not motivated much by hope. I am telling the truth about the urgency of the climate catastrophe because I am doing my duty. I was raised on stories of the long fight for India’s independence from Britain during the course of which tens of thousands of people were arrested and some died. Four hundred freedom fighters were arrested in the fight to end interstate busing alone during the struggle for civil rights for Black Americans. Suffragettes were arrested and some died. Many people were jailed for protesting the onslaught of fascism. People demanding AIDS treatments went to prison.These struggles took years.

It is a bit disconcerting that most of the people getting arrested are in their 50s and 60s. The freedom fighters, the suffragettes — most of them were young. This is your future. If we win, you can still get your university degrees and college diplomas and pursue your hobbies. But we have run out of second chances for a habitable planet. If we lose, none of that will matter.

Pensions and health care depend on avoiding societal collapse. You have seen the human death and damage to the economy caused by single events like heat domes, fires and floods. We are trying to save what you hold dear. Join us.