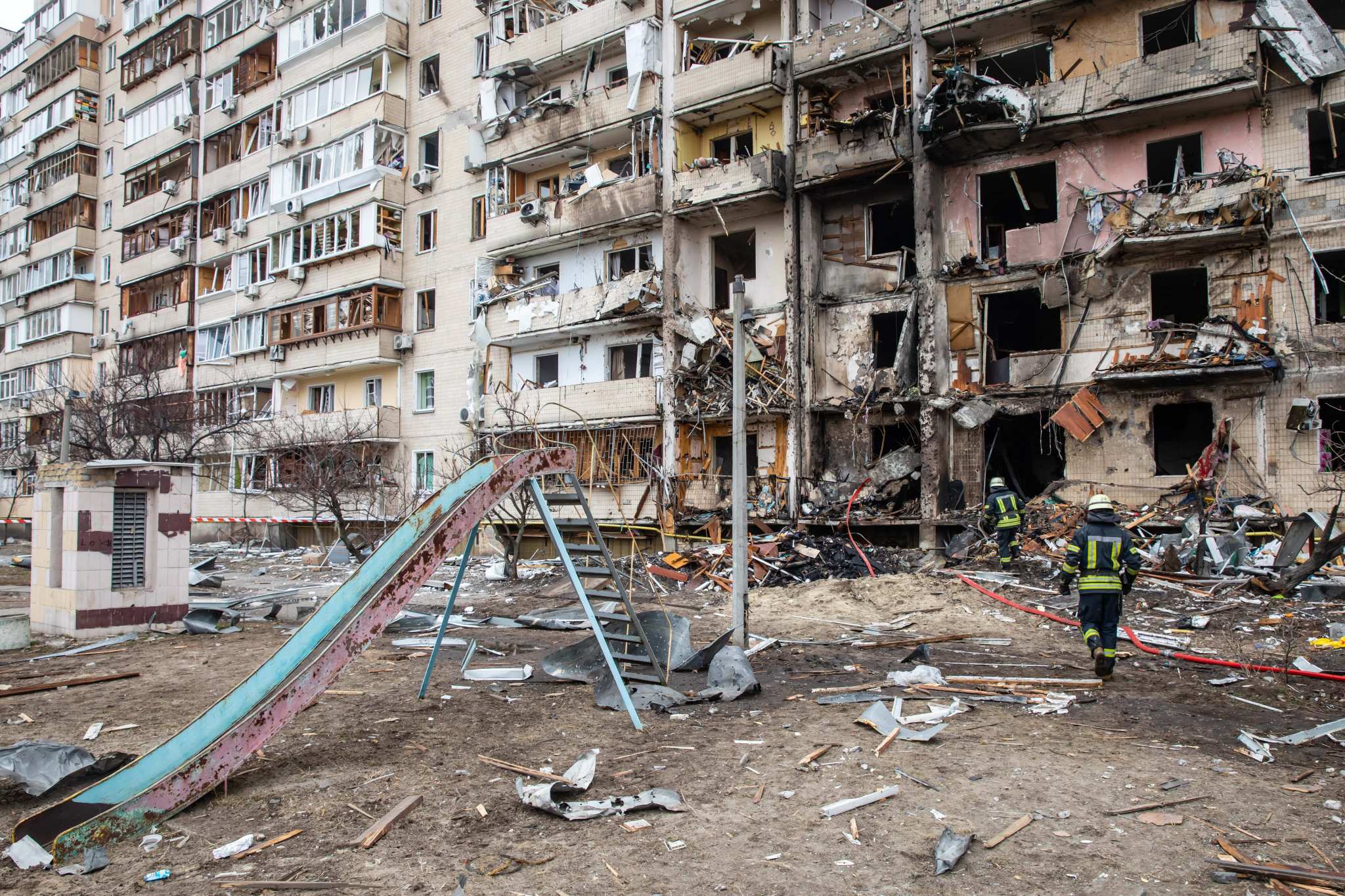 Russia’s full-scale military invasion in Ukraine should not be used as an excuse to increase our dependence on fossil fuels. Photo by shutterstock
Previous story

Recently, Ukraine’s ambassador to Canada Yulia Kovaliv pleaded for more Canadian oil and gas. As Ukrainians, we’re pleading with Canadians not to listen to her misguided attempts to keep Ukraine and Europe addicted to the same fossil fuels that enabled the war in the first place. We write to you after having seen our country devastated, whole cities levelled and our families’ lives uprooted by war.

A week after Russia’s full-scale military invasion in Ukraine, we launched Stand with Ukraine. The campaign now unites hundreds of organizations across the globe around a common goal — ending the global fossil fuel addiction that feeds Vladimir Putin's war machine. Stand with Ukraine calls for rapidly phasing out fossil fuels and an immediate transition to clean energy everywhere.

We’re writing to you today, on the final day of the G7 summit, because we are very concerned with the growing push to expand the same global gas industry that co-operated with Russia for decades and propelled Putin’s regime to power.

Today, gas producers around the globe — including in Canada — are trying to portray themselves as saviours of Europe with the expansion of LNG export supplies. They’re hoping we ignore that the International Energy Agency’s net-zero by 2050 report said no new coal, oil or gas projects are needed if the world is to limit global warming to 1.5 C. But climate damage can’t be ignored. Neither can the gas lobby’s desperate attempts at profiteering.

Let us be clear: Europe and Ukraine do not need your gas. We need more clean, affordable, accessible and transparent energy policies, ones based on the best available science and technology — not on vested interests.

Measures proposed in the Fit-for-55 package and REpowerEU plan would enable the European Union to eliminate dependence on Russian fuel well before 2030 through the large-scale deployment of renewables, heat pumps and energy-efficiency measures.

Recent studies show Europe is experiencing a short-term energy crisis, which will largely be resolved within three years. For example, a joint analysis by European think tanks Bellona, Ember, E3G and the Regulatory Assistance Project shows that accelerating clean energy paired with energy efficiency can replace two-thirds of Russian gas imports to Europe by 2025 and that constructing new gas infrastructure is unnecessary for Europe to achieve energy independence from Russia.

Another study by consultancy Artelys, based on granular energy system modelling, shows that European energy assets coupled with energy efficiency and electrification measures are enough for a complete phaseout of Russian gas, also by 2025. Limited supply issues that may arise in Finland and the Baltics region can be solved by additional interconnection with Europe’s power grid and limited LNG imports through existing terminals. No new gas infrastructure is needed.

According to your Natural Resources Minister Jonathan Wilkinson, building a new LNG export facility on Canada’s East Coast would take five years. But as the research shows, that would be two years after Europe’s energy crisis has largely been resolved — too late to make any difference in the standoff with Russia.

A new East Coast LNG export facility is destined to become another stranded asset — as useless as the Russian Nord Stream 2 pipeline, with 10 billion euros buried at the bottom of the Baltic Sea. Any investment in new LNG infrastructure will result in more wasted billions at a time when funds would be better spent on more accessible and more affordable renewable energy.

Against this backdrop, producers of oil and gas are propelling the LNG lobby to exploit the Russian invasion in Ukraine to push for more deregulation, subsidies and access to long-term investment capital finance, while taking advantage of market shocks and price increases to keep profits and share values high.

The fossil fuel industry is already making a killing on the war in Ukraine due to unprecedented energy price spikes. If the gas industry really wanted to help Ukraine, why not slash their prices or donate their massive profits entirely to helping rebuild Ukraine? The industry’s dramatized desire to help Ukraine is just another attempt at expansion when the world is growing more skeptical of their climate-wrecking product.

Canada’s leaders are known for bold words on climate at events like the G7. Now Canada’s leaders must match bold words with bold actions. And that means not being misled by the gas industry into building expensive, climate-damaging LNG export facilities that won’t help Europe.

Adding new fossil fuels while the world is careening closer to climate catastrophe is fundamentally wrong — deadly in all senses: for Ukrainians under siege of a fossil-fuelled invasion; for low-income Europeans who risk being without affordable heat this winter; for communities ravaged by fossil fuel exploitation; for our perishing climate and biodiversity.

What we face today is the war of oil and gas against all of humanity. In the world, which is facing extreme impacts of climate change with millions of people losing their lives and livelihoods, the push to expand gas production is a genocidal act.

Svitlana Romanko is an environmental lawyer and Stand With Ukraine campaign lead.

Oleh Savytskyi is a climate and energy policy expert with Ukrainian Climate Network and is a Stand With Ukraine campaign manager.

The war in Ukraine: The end of fossil fuels?

I'm heartened by the

I'm heartened by the predictions of Europe's ability to end dependence on fossil fuels by 2025....and of course Canadian pipe dreams of LNG on the east coast would come too late to help Ukraine....but in addition, if you know anything about fracking, you should know exporting fracked gas is the complete triumph of fantasy over fact.

Fracking is debt ridden, fracked wells are short term mop up operations of hard to access gas, and the idea to export it to Europe depends on a future where our back country is turned into a pincushioned sacrifice zone.
The water alone, which fracking uses as if it were unlimited, spells disaster for all of us. It's long past time we woke up and stopped listening to an industry that has been lying about the science of climate change since the 70's.

There is also the false promise of plenty when in fact fracked gas and oil have notorious production decline rates averaging over 50% in the first year of production in US shale formations, sometimes as much as 90% in some wells. This was documented by Canadian geoscientist David Hughes' in his exemplary 'Drill Baby Drill' report, and also in a separate study he conducted on BC's northeast shale gas plays. By his calculation using industry's own production data, three of the five major US shale plays have already plateaued or are in decline. He also touched on the massive debt taken on by US shale gas and oil producers who make just enough money drilling faster and faster to keep up to the decline and to make the next debt payment. Profits are elusive for these drillers, though the investment banks and brokers really like to push the hype on shale, earning a fee with every share purchase.

Show us one major renewable energy initiative that participates in such a vicious cycle.

We need to do what we can to

We need to do what we can to amplify the statements of people like David Hughes. And also those of people like Bill McKibben who has been saying for years that fracked gas is just as bad for the climate as coal.
Mainstream media are largely shills for the fossil industry. When we see their obsequious nonsense such as how good the currently high price of fossils is for Alberta and for Canada we need point out that their favourite industry has managed to externalize most of the costs and it is those 'externalities' that our ruining our one and only planet.

When I first heard the idea,

When I first heard the idea, I wondered, "gee, can they throw together some kind of temporary gas terminal in a matter of months, the way they can throw up a temporary bridge on the Coquihalla in a matter of weeks?"

Five years is just a joke. The world spent $1.4T on renewables, energy storage, and transmission lines last year - more than the total on Oil and Gas.

That's the inflection point. When the big money guys that throw around tens-of-billions projects (like Dogger Bank, UK; the Morocco/UK power link and the multiple projects to run lines from the Sahara to Europe; and now the big line from northern Australia to Asia ($20B) is going to bring staggering quantities of solar and wind to the hundreds of millions of customers.

It's all over but the shouting, O&G. Five years from now, Europe will have moved on. They feel very, very foolish in 2022 for allowing themselves to be under a Russian thumb, and any more O&G dependence will be anathema.

Supply chains are working against the delivery of renewables to a limited extent, but we need to look to the big picture and know that EVs aren't everything. Once society gets around the 'Almighty Car' and 'Lack of Rare Metals' media focus, the huge advances in batteries and more efficient solar and wind tech that use more common materials in grid-scale storage while ringing in at very affordable prices are uncovered.

Another fascinating story evolving today stems from the stranded asset concept. Just how suddenly will the Bay du Nord and BC LNG projects find themselves in a financial bind given the undersea cable delivery of ever cheaper carbon-free electricity to their current and prospective markets? The Baltic Sea currently has Nord Stream 1 delivering Russian gas, but with the supply cranked down as a countermeasure to sanctions. Nord Stream 2 was shut down before it even opened as the result of Putin's Peter the Great delusions. Meanwhile, European nations around the North Sea are busily laying huge high voltage direct current cables under the North Sea at a steady pace to accommodate vast hydro and wind power deliveries to their neighbours. Several EU nations, forced by Putin's war on Europe, are joining their national electrical grids together quickly to allow interconnectivity over great areas to offset some imports of fossil fuels.

These actions are slowly whittling away at fossil fuel hegemony, country by country, investment by investment. However, China is burning more coal to replace US LNG that has been redirected to the EU. I don't believe this will be permanent because China also makes the cheapest solar and wind components and EVs, and they too understand the concept of energy security, loss of life and illness from unclean urban air and expanding exports to boost their economy.