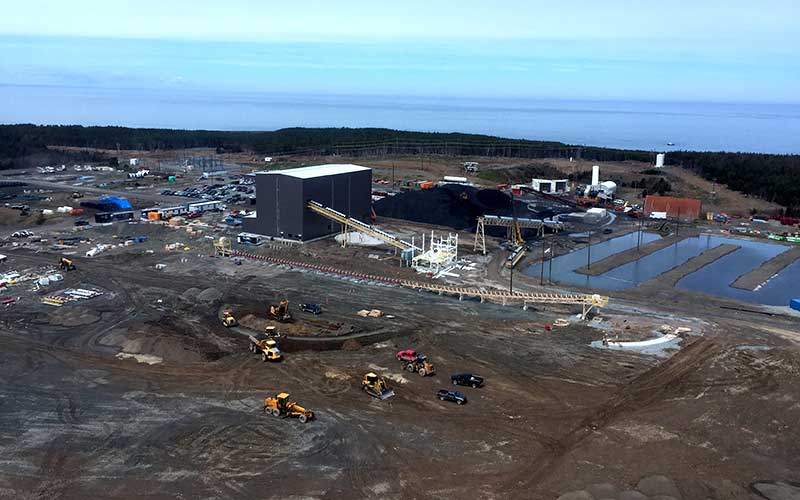 Donkin Mine in Cape Breton as seen from above. Photo courtesy of Morien Resources Corp.
Previous story
Next story

As Canada inches closer to 2030 — the year it plans to quit coal power — reports are surfacing that a tiny town in Nova Scotia will soon reopen its dormant coal mine.

The Donkin Mine in Cape Breton, at the tip of the island close to the Atlantic Ocean, was shut down in 2020 due to unsafe working conditions — the mine’s roof collapsed over a dozen times during its last years of operation. Kameron Coal, the company that owns the mine, put a pause on operations, with the caveat it could restart in the future. Rather than flooding the mine, which occurs when maintenance systems are shut down and water is no longer being kept out, it was left open, with a few employees working to keep it ventilated.

Now, there is noise the company is looking at plans to reopen. Kameron Coal didn’t respond to multiple requests for comment, but Cape Breton regional councillor James Edwards told CBC the company is gearing up to restart operations. At a community liaison committee meeting earlier in June, Kameron Coal said it was in the process of putting together the documents needed for government approval.

The province said it can’t comment on business plans, but the Department of Labour, Skills and Immigration confirmed the stop-work order related to unsafe conditions in the mine still stands. Before any reopening, the province would have to review and approve operational plans, the department added. However, the industrial approval of the mine, which is given by Nova Scotia’s Department of Environment and Climate Change and pertains to more general operations, remains valid until December 2022. At the same time, the price of metallurgical coal — the kind produced at Donkin Mine — has skyrocketed and could remain high over time as fewer investors are willing to put money into mines, making demand higher than supply.

Controversy surrounded the mine during its three years of operation. It had dozens of safety violations within months of opening and received blowback from fishers and other community members opposed to underwater seismic testing from the company. As reported by SaltWire, Elizabeth Marshall, a member of the Mi’kmaq Warrior Society, said Kameron Coal’s plans for seismic testing violated Indigenous treaty rights.

Throughout the mine’s dormancy, residents have been concerned about noise pollution from the ventilation fan, which pulls in fresh air to dilute methane and prevent explosions; the sound is loud enough to wake them up at night. Catherine Fergusson, who lives in South Head across the bay from the mine, says it’s been a “groundswell of absolute desperation” since the mine closed.

Despite a muffler installed in February to quiet the noise, Fergusson said there’s been little relief.

As Canada inches closer to 2030 — the year it plans to quit coal power — reports are surfacing that a tiny town in Nova Scotia will soon reopen its dormant coal mine. #FossilFuels

Fergusson and her husband have written dozens of letters to municipal and provincial governments and Kameron Coal. For the most part, they have been told the noise is within guidelines. The couple formed the Cow Bay Environmental Committee in response to the mine and have banded together with around 50 other households who are also impacted.

“We can't sleep and we have to leave our homes. And you're telling us that that's OK?… Such a disconnect,” she said.

On Wednesday, the Atlantic chapter of the Sierra Club launched a campaign pushing for the permanent closure of the Donkin Mine. Tynette Deveaux, with the organization’s Beyond Coal Atlantic campaign, stressed the province won’t be able to meet its climate targets if it keeps mining coal.

“The provincial government needs to look at this mine carefully through a climate and social justice lens,” said Deveaux.

“If the government allows Donkin Mine to reopen, they’re either saying they don’t believe the science that the IPCC and other international bodies have put forth — or, they’re saying, ‘Let the Hunger Games begin.’ This will be an important test for the Houston government. We’re about to find out if this government is serious about supporting a green transition or if it’ll be business as usual.”

This article has been updated to clarify the function of the ventilation fans.