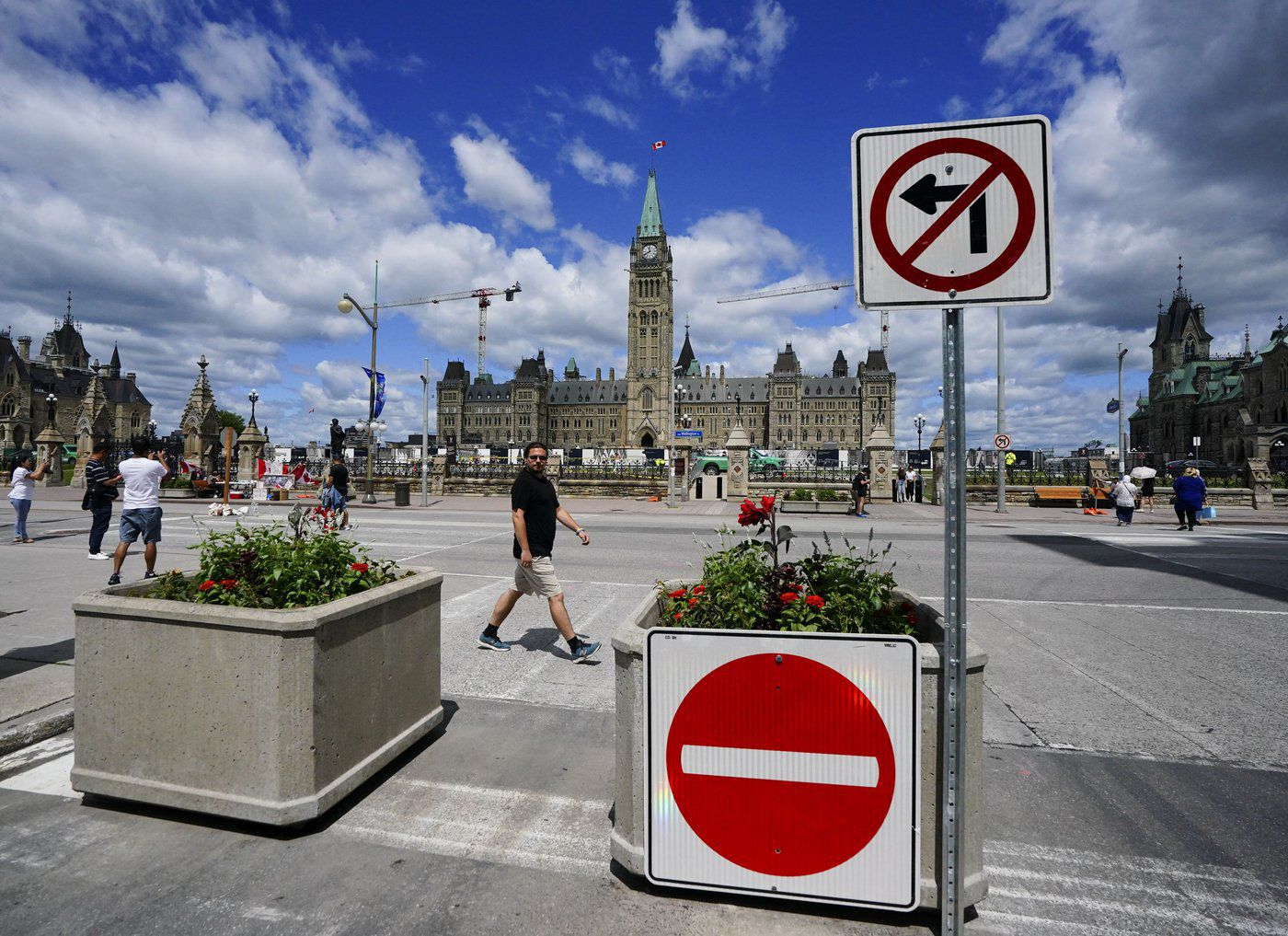 Signs are pictured on Parliament Hill prior to Canada Day, in Ottawa on Monday, June 27, 2022. File photo by The Canadian Press/Sean Kilpatrick
Previous story

A Canadian soldier charged for speaking out against COVID-19 vaccine requirements will march through Ottawa on Thursday, kicking off what organizers are promising — and residents fear — will be a new wave of protests throughout the summer.

Army reservist James Topp was charged in February with two counts of conduct to the prejudice of good order and discipline for comments made while wearing his uniform, and has since been leading a four-month march to the capital from Vancouver.

His march has been supported by many of the same figures involved in the "Freedom Convoy" that snarled downtown Ottawa for weeks until police used force to end what they and the government described as an illegal occupation.

His arrival in the capital and promises of a new round of protests starting Canada Day have set residents on edge. Ottawa Mayor Jim Watson and the city’s interim police chief, Steve Bell, have promised to crack down on any illegal activity.

More than two dozen Conservative MPs hosted Topp and other leading figures in the Freedom Convoy on Parliament Hill last week, posing for pictures, promising their support and listening to a lecture on the purported dangers of COVID-19 vaccines.

Health Canada says only vaccines that meet strict safety, efficacy and quality standards are approved for use in the country, and the benefits of COVID-19 vaccines continue to outweigh the risks of the disease. About 85 per cent of Canadians have received at least one dose.

Topp told the MPs that he was marching in part to get all vaccine mandates repealed, as well as to demand the reinstatement of anyone who lost their job because of such a requirement and compensation for wages lost.

At the same time, he and the others raised the spectre of civil war in describing the state of the country.

The charges against Topp relate to two videos posted online in the winter in which the army reservist appears in uniform criticizing vaccine requirements for military personnel and other federal employees.

Canadian Armed Forces members are severely restricted in the comments they can make while in uniform, particularly when it comes to criticizing government policies, in large part to protect the military from any perception of politicization.

His lawyer has argued such restrictions should not apply to policies that affect Armed Forces members personally.

Topp has said he has no plans to lead an occupation of the capital, and invited Ottawa police to work with him to facilitate his planned march through the city to the National War Memorial.

However, an organizer for a group calling itself Veterans 4 Freedom said in a recent video posted to YouTube that it plans to set up a semi-permanent camp east of Ottawa called “Camp Eagle” and hold events in the city all summer.

While police have since managed to prevent similar protests from taking over the city, stopping planned demonstrations from getting out of hand during Canada Day is likely to be complicated by the presence of thousands of people celebrating the holiday.

“We won't be intimidated by any group that plans to disrupt the celebrations,” Mayor Jim Watson said during a briefing earlier this week. “We're prepared and we will not tolerate any illegal activity by anyone.”

Bell said police are prepared for a number of different scenarios, and will respond quickly to any illegal activity, including efforts to set up structures such as stages.

In late April, the Ottawa Police Services Board approved a request from Bell to appoint up to 831 RCMP officers to help with the Rolling Thunder motorcycle events, and made those appointments valid until July 4.

The city is warning that vehicles will be ticketed and towed if they're found violating no-stopping zones, although the full extent of the areas that will be off limits has not been determined.

Many Ottawa residents remain angry at how the city and police handled the “Freedom Convoy” protests, with several community groups banding together to launch a citizens' inquiry into how that protest was handled.

This report by The Canadian Press was first published June 30, 2022.