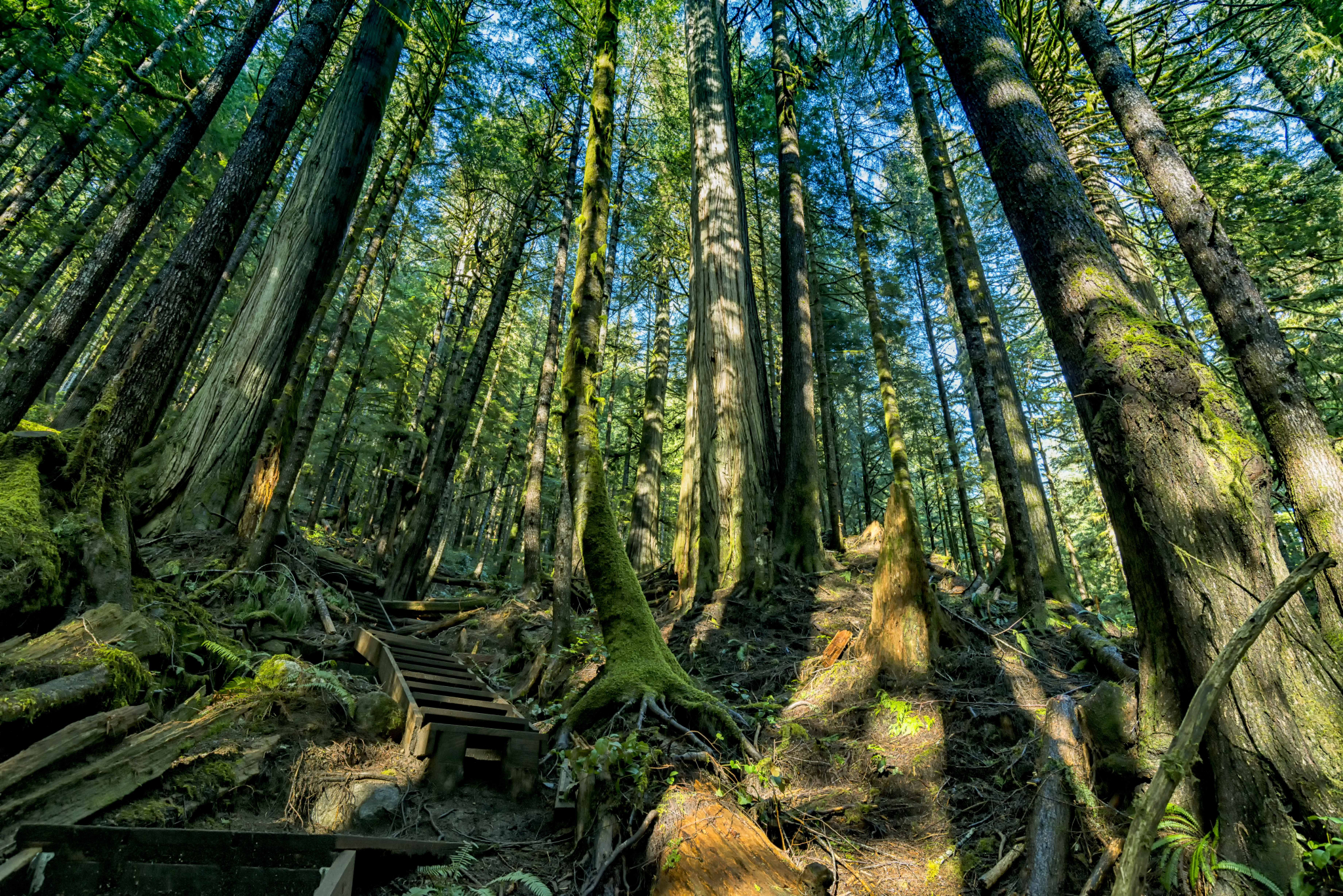 The great old-growth forests of B.C. were a source of unlimited wealth. We are now reaching the limits of available supply. Photo by shutterstock
Previous story

For thousands of years, Indigenous peoples lived in and around the forests of B.C. They used timber to build houses, make canoes and carve totem poles. They also used various parts of the tree for clothing, masks, rope, mats and other tools. The forests were an important source of medicine and spiritual connection.

When taking from the forest, they held ceremonies to ask permission and only took what was needed, being careful to cause as little damage as possible. With this care and respect, they acted as an integral part of nature and the ecosystem thrived indefinitely.

Before the arrival of European settlers, great stands of trees stretched across Vancouver Island and the mainland with the majority being what we now classify as old-growth. It wasn’t until the settlers arrived and later mechanized that the forests began to vanish in earnest. A new mindset developed where trees became timber and the harvesters sold and exported the fruits of their labour.

The foresters valued the natural environment in monetary terms and the oldest trees became prized for their capacity to generate profits. The great forests of B.C. were a source of unlimited wealth and the only difference in today’s mindset is that they recognize the full transition from old-growth logging to second-growth logging is inevitable. We are reaching the limits of available supply.

The Old Growth Strategic Review Panel released its report in 2020, calling for a paradigm shift in forest management where managing the natural resource for its timber is replaced with managing ecosystems to ensure health and protect biodiversity.

In an apparent acknowledgment of this realignment with the Indigenous view of nature, the report's first recommendation states, “Engage the full involvement of Indigenous leaders and organizations to review this report and any subsequent policy or strategy development and implementation.” The NDP government made an election promise to implement all 14 of the report’s recommendations.

As a result of the climate crisis, more people are beginning to embrace a nature-first outlook that is closer to an Indigenous worldview. There is a growing body of scientific evidence that confirms we need to consider nature as the planetary life support system that we have severely compromised in the last few centuries.

In spite of this growing wisdom, there’s a strong backlash due to fear that climate action will threaten existing socioeconomic systems and those who benefit from them. Forestry corporations and their workers are aggressively fighting any change that results in restrictions on their harvests of high-value timber. They threaten layoffs, loss of government resource revenues and play down the future financial risks of continuing with the current method of forest management.

Industry associations and lobby groups argue that B.C.’s economy will be irreparably harmed by managing ecosystem health, while insisting that they are already doing a fantastic job of managing sustainability and biodiversity.

Their message is well-received by many because business-as-usual has been very profitable for everyone involved. Timber harvesting has sustained high-paying jobs, generated fat corporate profits, contributed to public services through tax revenues, and ultimately allowed hundreds of thousands of people to buy homes, vehicles and all the accoutrements of a wealthy society. It is difficult to change how we value what nature provides.

Opportunities are defined as “activities that create positive outcomes for organizations and nature by avoiding or reducing impact on nature or contributing to its restoration.” According to the TNFD, nature-positive business models could generate US$10 trillion in opportunities and support 350 million jobs by the end of the decade.

Many forest ecosystem services like producing oxygen, purifying our waters, and filtering our air are considered free, although their true value to society is priceless. It’s important to create a system for quantifying natural-asset values for the purpose of fair comparison with economic systems that western society is most familiar with.

We also need to assess the cost of losing ecosystems and biodiversity. For example, insurance companies have greater financial risk as the frequency of wildfires, floods, hailstorms, and drought-related agricultural losses escalate. These events are intimately linked to the depletion of natural assets, including the degradation of forests, wetlands, watersheds and soil health.

Opinion: The great forests of B.C. were a source of unlimited wealth. We are now reaching the limits of available supply, writes Rob Miller @winexus. #OldGrowth #AncientForest #LastStand

What future business opportunities are British Columbians foregoing by allowing the last three per cent of old-growth forests to be harvested for low-margin products such as shingles, furniture, and musical instruments?

Once old-growth is harvested, the potential for natural-asset values and revenue streams that persist and grow indefinitely will be gone. The obvious example is tourism. Protected forests provide tourism revenue for generations. Harvested forests provide “one-shot” revenue to forestry corporations where profits and value are unevenly distributed to senior executives and large shareholders.

Tourism businesses are put at risk when deforestation destroys their product, as well as the reputation of the region for offering natural beauty and thriving ecosystems.

Forests, wetlands and other “eco-assets” will become increasingly valuable as resource extraction, the climate crisis, and mass species extinction continue to reduce natural environments around the world. In the TNFD framework, environmental assets are recognized for their value in terms of biodiversity and ecosystem services. This is an important step, as more than half the world’s economic output, or US$44 trillion, is highly or moderately dependent on nature.

It would be unwise to consume what’s left of these environmental assets given that ancient forests require centuries to regenerate. For decades, we’ve been robbing future generations of nature’s assets and converting them into short-term financial gains.

The time has come to adopt a more Indigenous worldview where our connection to nature is of greater importance than our connection to consumer products and social media. That change will not come easily when natural assets have been taken for granted and far too many people value traditional extractive resource economies over business models that are more symbiotic with nature.

The TNFD framework is a step on the path to making this difficult change possible.