Ripe market: How you can cut your grocery budget — and emissions 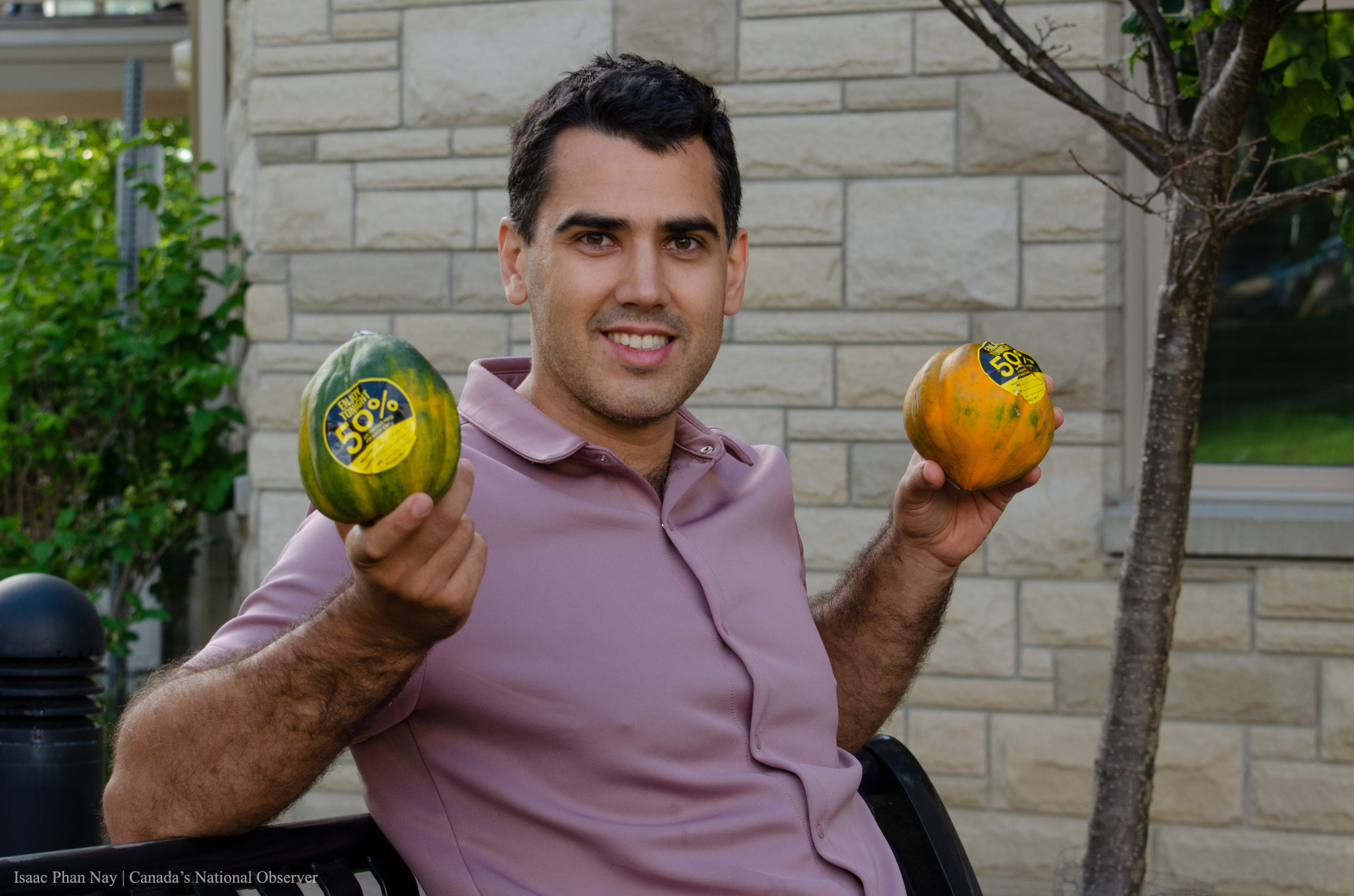 Camron Sabour shows two acorn squash he purchased at a discount from a last-chance produce rack at a grocery store in Ottawa on June 27, 2022. Photo by Isaac Phan Nay/Canada’s National Observer
Previous story
Next story

When Camron Sabour braved the 6 p.m. rush at his local grocery store one Wednesday in June, he couldn’t resist picking up half-priced jalapeños, acorn squashes and ripe bananas off the discounted produce rack.

Sabour, a marketing manager for a digital startup in Ottawa, says buying the food grocery stores want to throw out helps him meet his grocery budget each week. It also means less food gets tossed while still in its prime.

“It's a damn shame when that food is wasted,” Sabour says. “It just sits around the grocery store, nobody buys it, and it gets thrown in the garbage.”

Grabbing groceries before they get trashed has a green side-effect, too: reducing food waste cuts down on planet-warming greenhouse gas emissions, research shows.

The economic and environmental benefits of buying these discounted, last-chance groceries have allowed the app Too Good To Go to take hold across the world, including in Canada. The Denmark-based company lets businesses sell “surprise bags” of assorted food items that would otherwise be discarded for a third of the retail price.

Since last July, Too Good To Go has popped up in Montréal, Quebec City, Edmonton, Calgary, Vancouver and Toronto.

Meuwly’s comes up with creative solutions to reduce food waste, co-owner Peter Keith says, like pickling produce that can no longer be sold or selling unused bones to a local ramen shop. Keith says reducing food waste helps bring in revenue and is good for the environment.

Still, Keith estimates the market has to discard up to $500 worth of groceries too close to their expiry dates each month.

“When you think about the amount of work and energy and resources that have gone into producing a small jar of jam, (throwing that out) is actually a huge drain,” Keith says.

Grabbing groceries before they get trashed has a green side-effect, too: reducing food waste cuts down on planet-warming greenhouse gas emissions, research shows.

Food waste is responsible for eight per cent of global greenhouse gas emissions annually, according to a 2019 report by the World Resources Institute.

The report shows reducing global food waste by a quarter could put the agriculture sector 15 per cent closer to meeting its emissions goals for keeping global warming under 1.5 C. It also states almost half of all food waste comes from distributors, grocery stores and consumers.

That’s why Keith’s shop started using Too Good To Go.

“There's a business case for it as well as an environmental case,” Keith says. “We're leaving a footprint, and I think we need to leave things better than we inherited it.”

Keith is one of many business owners who have used the app in the year since it launched. Too Good To Go country manager Sam Kashani says Canadians have adopted the platform “very, very quickly.”

More than 3,000 businesses across the country are using it, Kashani says, selling more than 400,000 meals that would have otherwise gone to waste.

Sabour says he became more open to buying discounted groceries because it helped him make ends meet as his cost of living rose.

“I've noticed that things are more expensive lately. I bought two pizzas for, like, 70 bucks,” Sabour says. “It makes me think, 'OK, you got to tighten the belt.’”

But while surprise bags could be fun for Canadians looking to make a difference, Sabour thinks the strategy is too unreliable to appeal to people who wouldn’t already buy last-chance discounted food.

“I kind of need to know what I'm going to make before I buy it,” Sabour says. “If (people) don't know the recipe for an ingredient, they don't buy it in the first place.”

Keith says as Muewly’s expands its inventory, he hopes to create different categories of surprise bags so customers have a better idea of what they’re purchasing.

“Typically, our (listings on the app) have the size of the bag and how many items are in it,” Keith says. “My hope is as we start using this app more we can be a little more specific and make it so that if someone doesn't eat dairy, they're not going to buy a bag full of dairy products.”

If grocery stores and restaurants really want to have an impact on food waste, Sabour says they need to look for more reliable ways to use last-chance produce or purchase less food in the first place.

“(The app) will make life easy for a lot of people who are struggling to eat … if they are savvy enough to use it,” Sabour says. “Maybe there's a simpler solution or maybe we're just overthinking it.”

This article has been updated to clarify how much food Meuwly’s Artisan Food Market typically discards. It is $500 worth of groceries each month, not each week.