Wild species relied on by billions at risk 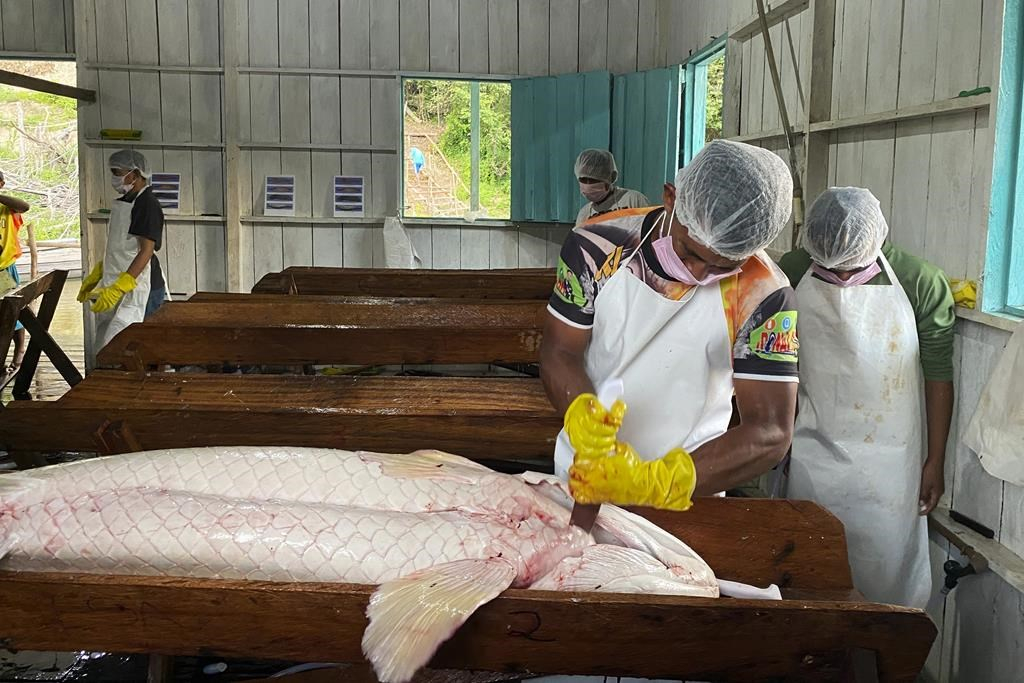 Members of the Deni Indigenous people work during the arapaima fishing season in the Jurua river basin in the Brazilian Amazon on Sept. 15, 2021. AP Photo/Fabiano Maisonnave
Previous story

RIO DE JANEIRO (AP) — Every day, billions of people depend on wild flora and fauna to obtain food, medicine and energy. But a new United Nations-backed report says that overexploitation, climate change, pollution and deforestation are pushing one million species towards extinction.

The Intergovernmental Science-Policy Platform on Biodiversity and Ecosystem Services — or IPBES — report said Friday that unless humankind improves the sustainable use of nature, the Earth is on its way to losing 12 per cent of its wild tree species, over a thousand wild mammal species and almost 450 species of sharks and rays, among other irreparable harm.

Humans use about 50,000 wild species routinely and one out of five people of the world’s 7.9 billion population depend on those species for food and income, the report said. One in three people rely on fuel wood for cooking, the number even higher in Africa.

According to the study, Indigenous peoples occupy around 38,000,000 square kilometres of land in 87 countries, equivalent to about 40 per cent of terrestrial conserved areas.

“Their lands tend to be doing better in sustainability than other lands. And the common thread is the ability to continue to engage in customary practices,” said Emery, who is also a researcher with the U.S. Forest Service.

Emery argued it is essential to secure national and international systems, such as education, that promote the preservation of Indigenous languages, as it maintains the ability for older members to transfer traditional knowledge about sustainable practices to new generations.

An example of good practice is fishing arapaima, one of the world’s largest freshwater fish, in Brazil’s Amazon, co-chair of the report Jean-Marc Fromentin of France told the AP.

“It was a move from an unsustainable to a sustainable situation,” Fromentin said. “Some communities in Brazil created community-based management and then called some scientists to learn more about the fish’s biology and to put in place an efficient monitoring system. It worked so well that the model went to other communities and countries like Peru."

A new United Nations-backed report says that overexploitation, climate change, pollution and deforestation are pushing one million species towards extinction.

Gregorio Mirabal, the head of the Indigenous Organizations of the Amazon Basin, who did not take part in the report, told the AP there had already been several UN studies stressing the importance of biodiversity and the threats posed by climate change, but they don’t bring about solutions.

The Indigenous leader mentioned growing problems in the region such as water contamination from mercury used in illegal mining and oil spillages. Moreover, those who oppose these practices face violence, such as the recent murder of an Indigenous warrior in a mining area, in Venezuela.

“There is irrational exploitation of natural resources in the Amazon, but there is no social investment to improve the health, educational, cultural and food situation of the Indigenous peoples,” Mirabal said.

The report was approved by representatives of the 139 member countries gathered this week in Bonn, Germany. It involved dozens of experts, from scientists to holders of Indigenous knowledge. IPBES is an independent intergovernmental body and is not part of the UN system, but it has the support of the United Nations Environment Program and other bodies.

UNESCO’s youth advocate pushes for cash to educate the world

TMX can tear down our treehouses, but not our mission