How one Labrador community is taking energy into its own hands 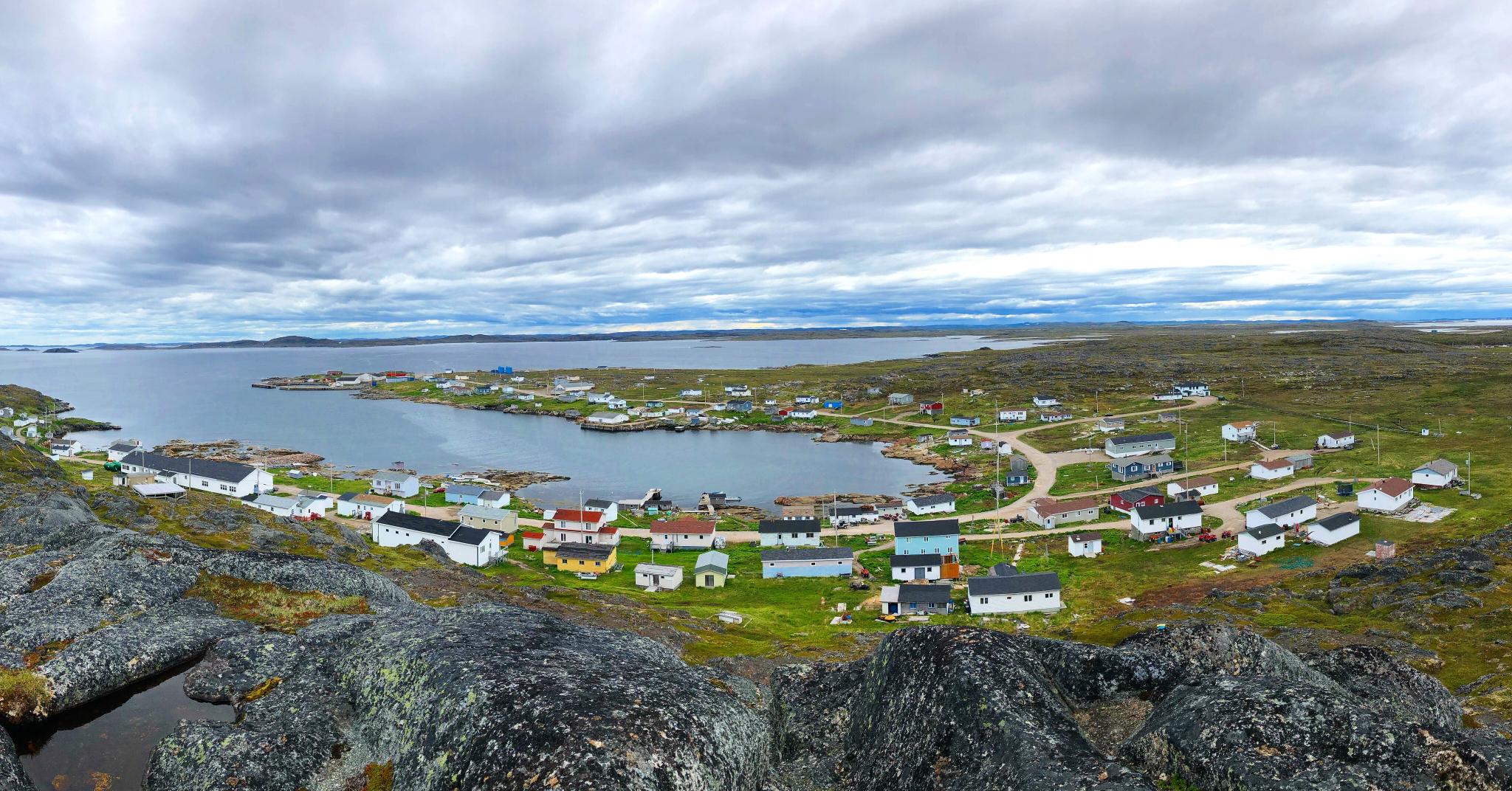 Black Tickle, an Inuit community of 87 on the sub-Arctic tundra Island of Ponds, nestled in the Labrador Sea. Photo by Tara Keefe
Previous story

Ever since she can remember, Tara Keefe’s grandmother has used her wood stove to keep warm during the winter months in Labrador. Along with the unparalleled warmth from the fire, her home is heated with diesel, like many households in rural parts of the province.

“Nan will never be without her wood stove because she can't get warm with diesel heat. She's not warm unless she has her wood stove,” said Keefe, speaking over a Zoom call in June.

Both Keefe and her grandmother live in Black Tickle, an Inuit community of 87 on the sub-Arctic tundra island of Ponds, nestled in the Labrador Sea. She describes the community as tight-knit — it’s accessible only by boat or plane and “everybody knows everybody,” said Keefe.

Along with all the good is a long battle to keep people warm in their homes. Between 2015 and 2021, there was no gas station where Black Tickle residents could buy diesel. That meant once the limited local stockpile was exhausted, people had to make a 200-kilometre round trip via snowmobile to Cartwright to keep their drums stocked over winter. Unstable sea ice — a phenomenon that’s becoming increasingly more common due to climate change — and travel costs were burdens.

A gas station opened last year and diesel is now more readily available, but it’s still expensive and doesn't give residents steady access to affordable energy when they need it.

Because of the high price and climate impacts of diesel, the federal government has a goal of getting remote communities off the fossil fuel by 2030. Ottawa has put forward initiatives such as the Northern REACHE Program, which provides $53.5 million over 10 years for renewable energy projects in the North, and the $31-million Impact Canada Indigenous Off-Diesel Initiative. There has been some progress, a report from the Pembina Institute points out: between 2015 and 2020, renewable energy projects almost doubled across remote diesel-reliant communities.

The federal government is also recommending SMRs, a next-generation nuclear technology, as an energy alternative for diesel-reliant communities like Black Tickle. But the portable nuclear reactors come with concerns around toxic radioactive waste, are much more expensive than already reliable forms of renewable energy and are not expected to be available until around 2030 — too late to address our urgent climate concerns, according to experts.

Instead, community members and researchers think there might be an easier way, at least for now: high-efficiency wood stoves.

Residents will soon be able to test that theory. A partnership between the NunatuKavut Community Council (NCC), which represents around 6,000 Inuit in south and central Labrador including residents of Black Tickle, and Dalhousie University is offering high-efficiency wood stoves to the Black Tickle community as part of a long-term study on energy autonomy in NunatuKavut.

Amid complex suggestions for ways to transition off diesel, is a community-led program in Black Tickle with a simple idea: high-efficiency wood stoves. #EnergySecurity #NL

Rather than waiting for a large utility company like Enbridge to install wind power or the federal government to bring in solar panels, the pilot will allow community members in Black Tickle to have access to free wood stoves much sooner and on their own terms, reducing their reliance on diesel.

The stoves will be high-efficiency units certified by the U.S. Environmental Protection Agency, which means they recycle many of the emissions from burnt wood to create more energy. According to industry estimates, they also burn between 33 and 50 per cent less wood than traditional stoves, making them “way more efficient and way better for public health,” said Nick Mercer, a postdoctoral research fellow in Dalhousie University's School for Resource and Environmental Studies, who is co-running the woodstove project.

While coming up with a 2020 plan to address energy needs in the community, Mercer found 25 per cent of people in Black Tickle live in inadequately heated homes, which has a range of physical and mental impacts. Not being able to get warm at home can lead to mental health issues, insomnia, cardiovascular disease and other illnesses.

“So our research really showed that heat security is a government-induced crisis, it’s not a flaw of the community members themselves. Various colonial forces have definitely resulted in some pretty extreme energy challenges locally.”

Using what they learned from the community energy plan, Mercer and Debbie Martin, a Canada Research Chair in Indigenous Peoples' Health and Well-Being at Dalhousie, worked with the NunatuKavut government to develop the high-efficiency wood stove project to address some of Black Tickle’s energy insecurity.

After a consultation period, which allowed the community to review the project, residents are now being encouraged to apply for the stoves. Fourteen of the 20 winter-resident households in Black Tickle already burn at least some wood, and the hope is to provide a stove for anyone interested in participating.

The wood stoves will not be emission-free but will emit much less greenhouse gas pollution than diesel and allow residents to be in control of their own heating. They will also cut people’s required wood harvest, an integral part of Inuit culture in Labrador, by half.

The project could also provide a framework for other communities to shift off diesel. Black Tickle isn’t alone in its struggle for energy security — 19 other isolated communities in Newfoundland and Labrador report similar challenges heating their homes while consuming around 25 million litres of the fossil fuel each year solely for power generation.

Renewable energy throughout the province

Black Tickle’s reliance on diesel might surprise those outside the province since Newfoundland and Labrador is so heavily associated with hydropower. Although the majority of the province’s grid does rely on hydro projects, the Holyrood Thermal Generating Station burns oil to account for up to a quarter of the province’s electricity. There’s also the massive Churchill Falls hydro-generating station, which funnels energy to Quebec, and the controversial Muskrat Falls hydro project. Although hydro is technically renewable, the large-scale hydro projects the province is involved with have been criticized for their environmental and health impacts.

These renewable endeavours provide justification for more oil and gas development, the province has said, since they’ll help Newfoundland and Labrador reach its net-zero goals. But experts have stressed no new oil and gas development can occur if we want a shot at meeting global climate targets; rather, they say, we need to be scaling back on fossil fuels.

Off-grid communities like Black Tickle are not part of the province’s renewable grid. The majority of isolated communities in Labrador are also Indigenous, meaning “off-grid energy advocacy needs to be centred on the rights of Indigenous Peoples because it's these policies and projects which impact them,” said Mercer.

As of now, they’re not, and challenges exist with access to all types of energy.

Newfoundland and Labrador Hydro, the provincial utility, loses money on electricity in remote communities, which is why a limit is placed on the baseline energy price. Currently, energy is subsidized through a couple of government programs. However, there’s a monthly cap of 1,000 kilowatt-hours (kWh) per customer priced at a lower rate compared to other parts of the country.

If you surpass that level, rates almost double, explained Mercer. According to Statistics Canada, the average household in Newfoundland and Labrador surpasses the cap, using around 1,650 kWh per month. Electrically heated households in a harsh coastal Labrador climate can easily surpass several thousand kilowatt-hours per month in the winter.

It makes electricity inaccessible, which is why most people use diesel — a slightly more affordable, but still costly, option.

“We pay the highest price for gas and diesel and our power rates are some of the highest in the province, so anything that can cut back on any of those costs will help the people because they’re all on fixed incomes here,” said Keefe.

Ultimately, emissions from diesel use in places like Black Tickle don’t begin to compare to the rest of the country, but the source is carbon-intensive and costly. Although wood stoves might not be as emission-free as wind or tidal power, they’re an immediate solution that could act as a bridge to green energy while maintaining important cultural dimensions of the energy system.

The wood stove pilot complements other projects the NunatuKavut Community Council has on the go, such as a home retrofit program and two solar projects in Black Tickle and St. Lewis, and is “another step in reaching energy autonomy,” said the NCC.

I get where they're coming

I get where they're coming from, but it's not ideal. Maybe they should talk to these folks: