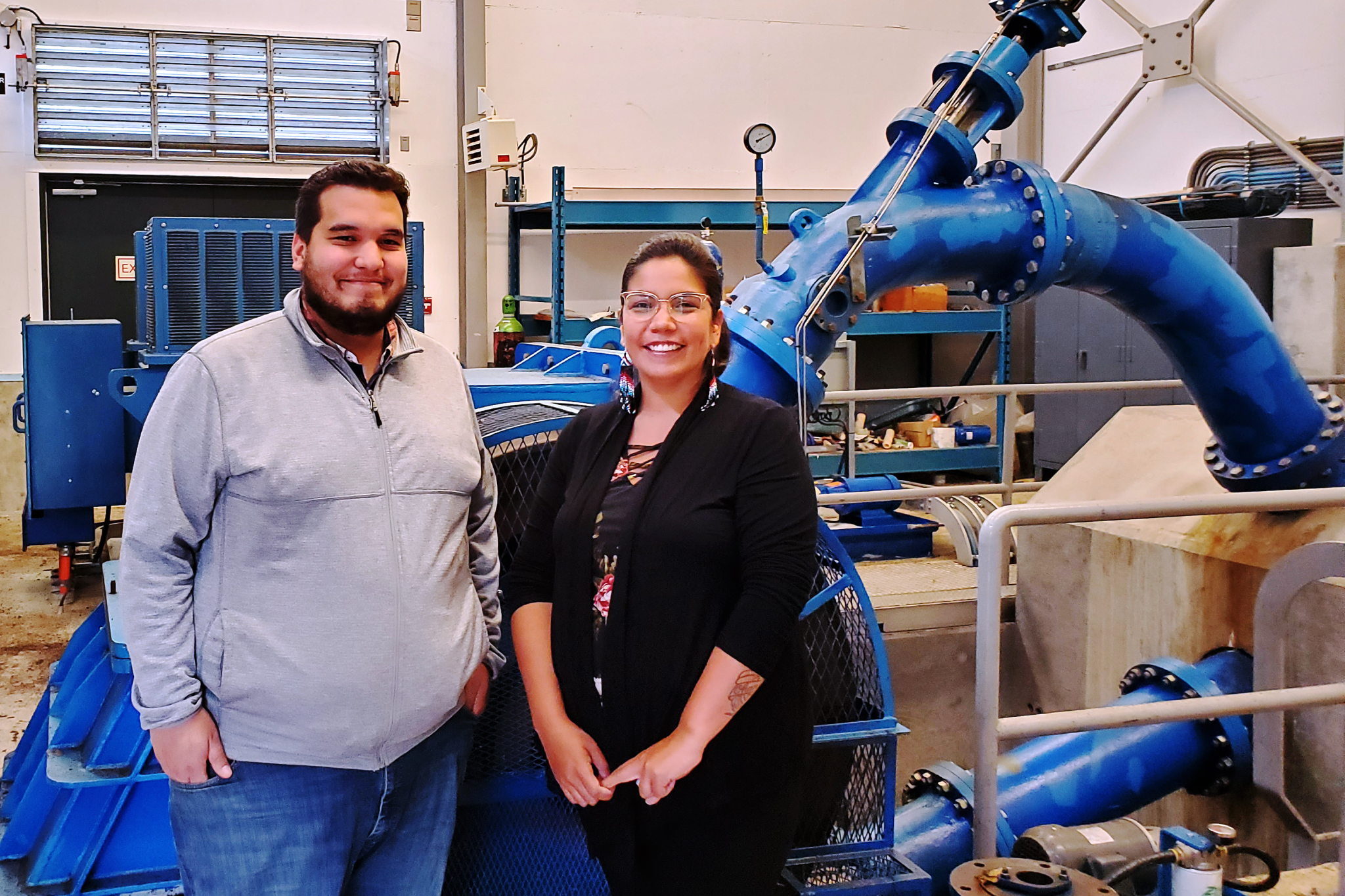 The remote Dzawada̱ʼenux̱w First Nation lives “in total paradise" across from northeast Vancouver Island, Moon said, nestled by the glacial Gwa'yi River on the west shore of Kingcome Inlet — but the catch is they’ve been forced to boat or fly in "dirty" diesel fuel just to power their fridges, lights, heating and essential services.

Without access to B.C.’s electric grid, the First Nation even tried to build a water turbine in the 1980s; then a landslide took it out. Reluctantly, the community was forced back onto diesel again.

“For us, we feel like we're held hostage,” Moon, the band's elected chair, explained. “We had to put a generator in the village here, just a couple hundred metres from our band office — so it was pretty loud!"

“Our diesel generator engines run 24/7, so you can imagine the amount of pollution that goes into the air of our valley here, and the price can skyrocket at any time. But it's the only source of power that we have in our community.”

The powerlessness Moon talks about is the electricity his First Nation needs — which most Canadians take for granted — imposed by decades of Indian Act policies and bolstered by federal diesel subsidies.

But in every other respect, Moon’s community is far from powerless. They’re about to embark on a multi-million dollar hydroelectric project to forever get themselves off their noisy, polluting diesel generators, now located outside their village next to the derelict former turbine.

“The only way you can get here is by boat or plane,” he said. “You can't just drive into our community and say, 'I'm here to fix your power supply.' It doesn't work that way.”

‘We feel like we're held hostage’ say diesel-dependent First Nations. But that is changing — as #Indigenous energy sovereignty pushes for power in the hands of communities

His community is far from the only one battling decades of dependency on diesel. In B.C., the federal government estimates 22 remote First Nations burn diesel as their main power source — nearly 80 per cent of remote Indigenous communities, a higher rate than for diesel-dependent non-Indigenous towns.

Most frightening were those during winter months, particularly for elders’ safety, while others are remembered by community members with more bemusement.

Regular outages, he quipped, have almost become a way of life remembered by generations of kids.

“We deal with power outages at least six times throughout the winter months,” he said. “One of the more entertaining ones I think we've experienced as a community was, a couple years ago, the power went out on Hallowe'en — it was an interesting night for sure.”

Another year, the small old hydroelectric turbine ran out of water — in the middle of a rainforest. So, on came the diesel generators again.

“We are often maxing out the power load right now as it is,” explained Kitasoo’s Chief Councilor. Roxanne Robinson. “And once winter rolls around and the temperatures drop, members turn to heaters, and we really feel the pressure.

“We struggle with power outages throughout the winter months — which is the absolute worst time to go without power, when we have the north wind blowing (in addition to) the elements.”

Asked why, in the 21st century, so many First Nations still must burn diesel for their basic everyday needs, B.C.’s Minister of Energy, Mines and Petroleum Resources said it’s unfortunate but understandable given the high up-front costs of alternative power sources.

“If you don’t have that money, it’s cheaper to bring in a diesel generator and haul in diesel every once in a while to keep it running,” Bruce Ralston told Canada’s National Observer. “It’s really been a question of necessity if you want to have power for your community.”

That’s why his government announced a series of initiatives in First Nations community energy projects, like the two Vancouver Island reserves, as part of his government’s ambitions to “decarbonize” and electrify as much of the economy as it can, he explained.

“The goal is to get rid of the diesel, and also to create some self-reliance for the communities,” Ralston said. “Most of the communities are under Indigenous governance … (Diesel) is really the only alternative, because the capital funding to build a remote run-of-river hydroelectric project, let's say, is a couple million.

On June 18, the province announced $8 million towards major hydroelectric projects in Dzawada̱ʼenux̱w First Nation and Kitasoo/Xai’xais First Nation — the former constructing a 350 kW run-of-river station, and the latter an even larger 1.7 mW upgrade to its existing lake generating facility. In total the projects will cost $25 million combined.

The money comes from the province’s Renewable Energy for Remote Communities program, and is a partnership with the province and Coast Funds, an Indigenous-led conservation and economic development financing body.

“Since we were placed onto small reserves, we always struggle,” Kitasoo councillor Isaiah Robinson said. “We'd kind of come to a halt in being able to build and expand within our community.

By having this modernization of their hydroelectric station, she said, “We'll be able to see some homes being built within the next few years.”

Brodie Guy, executive director of Coast Funds said the impacts of the two new hydro projects will be game-changing for the communities.

The organization also co-finances dozens of others in Indigenous communities; Guy himself was once the Province of British Columbia’s liaison with the World Bank and other international development financiers.

“Today, the impact of colonization includes the dependency on oil that was designed into how the reserve system has operated,” Guy argued. “So energy sovereignty for these communities looks like finding a path away from that — and moving away from oil dependency that’s baked into the system in their villages.”

Other major projects underway in First Nations up and down the coast include a massive solar facility in Haida Nation — the largest in B.C. — a large industrial-scale wind farm by several nations in Cape Scott at the northern tip of Vancouver Island, and investments in still-nascent tidal and wave technology.

Today, the notion of “energy sovereignty” is increasingly being used to describe Indigenous pathways off the outside power grid.

“It's something that a lot of First Nations I've worked with want to see,” said Judith Sayers, president of the Nuu-chah-nulth Tribal Council. The lawyer knows electricity well: she’s on the board of Clean Energy BC, and was previously president of Upnit Power, which ran her Hupacasath First Nation’s own commercial-scale hydroelectric utility.

Sayers says having to ship and burn diesel is not the only problematic electrical issue for First Nations she works with; many communities also struggle with intermittent, unreliable electricity from outside, difficulties flying in electricians or power grid engineers when repairs are needed, downed BC Hydro lines if they are connected to the grid, and exorbitant government energy bills.

Not to mention the risk of catastrophic fuel spills for boat-access-only communities — many of them on a notoriously stormy coastline — such as Heiltsuk Nation which suffered a 110,000-litre diesel spill after a U.S. boat hauling fuel for Alaskan seaside towns sunk in 2016.

“All you need is one spill, and how devastating that would be to a community,” Sayers said. “We really, really want to see everybody getting off of diesel.

“Trying to create your own power in your own community is important for our sovereignty as well as just being able to control the power … If you had your own micro-grid and were producing your own power, you could easily fix your own lines and be back online in just a few hours.”

But the provincial government’s “welcome” funding measures for diesel-dependent remote reserves isn’t entirely a good story for Sayers and other energy sovereignty advocates.

“It’s been positive they're investing in helping remote First Nations build within their own communities,” she said, “but that's only a small part of the picture — we also really need economic development in many of our communities too, and electricity is one of the few things we can do in our territories to use our resources in ways that fit in with our values.”

But that vision has been set back, because at the same time the province is getting some reserves off diesel, Sayers said it’s also trying to take away the potential ability of First Nations to sell any excess power back into the electric grid — let alone creating it at a scale big enough for economic development.

Not only did the B.C. New Democrats scrap their BC Liberal predecessors’ controversial independent power buy-back program, but a bill before the Legislature would end BC Hydro’s “self-sufficiency” rules in order to let it buy cheaper power from out-of-province.

“I don’t understand this NDP government,” she said. “We have a government that says it's trying to build relationships and live up to the UN Declaration on the Rights of Indigenous Peoples, but their actions say otherwise.

“They've taken away whatever options we had to produce electricity for economic development purposes.”

Minister Ralston disputes that assessment, arguing that independent power agreements are “a distinct issue” from getting remote communities off diesel, and that his administration is simply trying to stave off BC Hydro’s billions in financial losses because it had been contractually obligated to buy back independent energy at rates “far above market prices.”

Chief Willie Moon admits the small hydroelectric project his nation is building is nowhere near big enough to sell excess energy. But it’s a massive first step for community members.

“Especially right now with this pandemic, we're gathering more and more of our traditional foods here in our valley and storing them,” he said, “because we don't know how long this is going to go on for.

“We have adapted to so much change … We’ve become dependent on that system ever since we brought in some of the luxury from the outside world, like fridges, to keep our food.”

Chief Councillor Michelle Robinson agrees that new “energy sovereignty” is essential to ending decades of dependency. And to that end, creating a self-sufficient electricity supply was a no-brainer — but how to do that had to be cautiously considered.

“The decisions we're making today are going to be felt 20 and 40 years down the road,” she said. “So we have to be very careful when we're moving forward in trying to progress our nation while making sure we're lessening our footprint on the environment.

“The way we see it, we're borrowing this land from our youth.’’