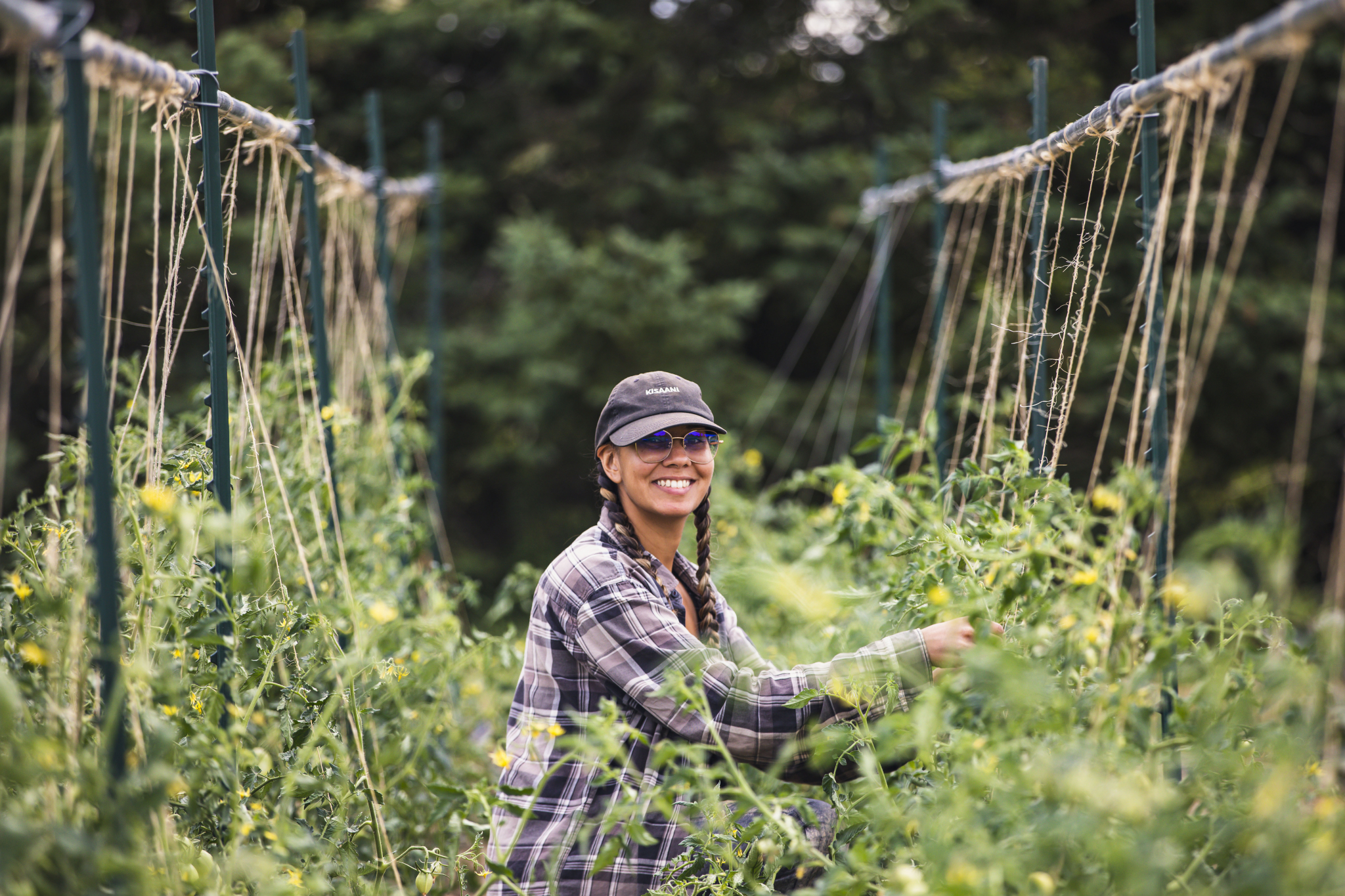 Rav Singh is leasing land for her farm specializing in south Asian crops, but pressure from developers for farmland leaves her few other options for land when the lease ends. Photo by Carlos Osorio/National Observer
Previous story

When Rav Singh decided to start farming south Asian crops like okra, bitter melon and fenugreek in Mississauga, Ont., she quickly realized her main challenge wouldn't be Canada's colder climate. The plants would thrive during southern Ontario's hot, muggy summers and her hometown's South Asian community was hungry for locally grown versions of the staple crops.

The problem was finding land to farm. Real estate prices have soared across Canada in recent years, and farmland is no different. From B.C. to the Maritimes, farmland near urban centres is being eyed by developers seeking to turn fields into suburban malls and residential cul-de-sacs.

The pressure for land is particularly acute in southern Ontario, where decisions this spring by the Peel and Durham regions — which include Mississauga — opened an additional 19,000 acres of farmland to development. Peel Region lies just to the west and northwest of Toronto, while Durham Region is slightly to the east. Both areas boast some of Canada's most fertile agricultural soil and growing conditions.

Singh eventually rented some land from another farmer in Caledon, so she’s able to farm — at least for now. "I would like to stay on the property for a very, very long time," she said. "But the reality is that developers are already knocking — and have been knocking — on the door for many years. So I don't know how long (the owners) will be able to hold onto the property."

Census data show that Ontario has lost roughly 40 per cent of its farmland since 1941, including over 1.5 million acres between 1996 and 2016, the most of any Canadian province or territory. Much of that land is categorized as Class 1 — the highest classification under the Canadian Land Inventory, representing the most productive farmland in the country. Only 0.5 per cent of Canada’s total land mass is considered Class 1 soil and most of it is in southern Ontario, Quebec, and B.C.

Protecting these fields and orchards is increasingly important as our food supplies are battered by the climate crisis and geopolitics, said University of Northern British Columbia professor David Connell. Extreme weather events like droughts or floods are poised to become even more common, while the pandemic and the war in Ukraine have laid bare the vulnerability of global supply chains.

About 70 per cent of Canada's food is produced in the country, but there is significant variation in terms of which items are produced domestically and where in the country they're sold, according to research by York University. Canadian farms produce most of our dairy, eggs, and grains, but many fresh foods like produce or fruit are imported from the southern U.S. or Mexico, especially in winter.

These regions are predicted to experience more intense droughts, wildfires and hurricanes due to climate change, impacting their agricultural output and ability to meet Canada's food needs. Protecting the farmland close at hand is key to mitigating the impacts of these crises on the country's food supply.

Real estate prices have soared across Canada in recent years, and farmland is no different. From B.C. to the Maritimes, farmland near urban centres is being eyed by developers seeking to turn fields into suburban malls and cul-de-sacs.

"There's no food security without land security," said Connell, noting that efforts by the federal and provincial governments to deal with the issue rarely involve protecting farmland.

"I guess it strikes too close to the capitalist system," which is based on protecting private property, he said. "It's just easier to talk about food security than (take) steps to protect land because protecting land means direct, harder choices (and) there's immediate feedback and accountability."

Canada has no national farmland protection plan. Instead, protection for these lands largely falls to provincial and municipal governments, leading to a patchwork of measures across the country.

B.C. and Quebec have the most stringent protections through dedicated agricultural land reserves that prohibit most residential and industrial development. Most other provinces and territories use tax incentives to keep farms in production, but a report by York University notes these tax breaks haven't been "particularly effective."

Ontario falls somewhere in the middle: The province's Greenbelt — a ring of protected land surrounding the Greater Toronto Area (GTA) — protects important ecosystems, including farmland, from development. But advocates for the region say pressure from pro-development municipal and provincial politicians is chipping away at the protections. Moreover, farmland in the GTA but adjacent to the protected zone is under intense pressure from developers and municipalities looking to build more suburbia.

"We have the greatest concentration of Class 1 soil in all of Canada in southern Ontario. It's a finite resource," said Rob Alexander, chair of the Durham Farm Fresh Marketing Association and the manager of an orchard in Port Perry, Ont. Once that land is paved over, notes a report by York University, there is no going back.

Many older farmers are counting on their land to fund their retirement, making it hard to turn down offers from developers able to pay far more than a young farmer could afford.

Protecting arable land is important, but the York University report states governments must also help farmers afford available land and once they are operating, stay in business. B.C. and a few other provinces have partnered with farmer organizations to secure long-term leases or similar alternative solutions to get young farmers on the land, but experts doubt the approach is a long-term fix because it rarely guarantees farmers decades of access to land.

Back in Caledon, Singh is focused on growing and selling this year's crop. Her farm is one of the few around Toronto that grows organic south Asian crops, and demand for her take-home produce boxes is booming. She would "love" to start an urban farm in Mississauga, but success will depend almost entirely on finding land nearby so she can stay connected to the community.

And if she can't find land?

"I don't know. (Maybe) I'll have to shift out and enter a new career," she said.

Protecting farm land from development or sale to foreign buyers seems to be low priority for Canada.  Pave it in the free Market system seems to be in vogue now that Doug Ford is making the green belt available. But I worry about ownership.  Large corporations are buying our farmland and they in turn when the opportunity arises, will sell it to a larger corporation or the highest bidder. And looking at  USA agriculture land trying to cope with heat and lack of water, who do we think will, be buying our country? Like so many other resources we just think of growth vs long term security . I suspect this will be a huge error.

The degradation of land in

The degradation of land in Canada is the direct result of the attitudes and exploitation of European settlers and their colonial policies - that continue to this day within the predatory capitalist dogma.

The choice between cultivation and paving, will soon be made for us by the rebellious environment. Taking a leaf from Star Wars, we can foresee the desertification of land already increasing and the instability of the climate, our atmosphere and the poisoning of our waters, will, if it does not extinguish us, drive us to living like troglodytes, returning to caves, to underground bunkers, and leaving the surface of the Earth to be scoured away by wind, storms, and fire.

The housing crisis is, to some extent, the inevitable and proximate cause of the "market's" response to the climate crisis. As the realtors like to say with notable lack of irony "Nobody is making more land".

If humanity is able to

If humanity is able to survive at all it will be under conditions of extreme artificiality, lab grown meat, vertical/underground greenhouses etc. which will, provide very limited population survival. The politics of "growth" will die and the grisly politics of survival will rule., "nasty, brutish and short"