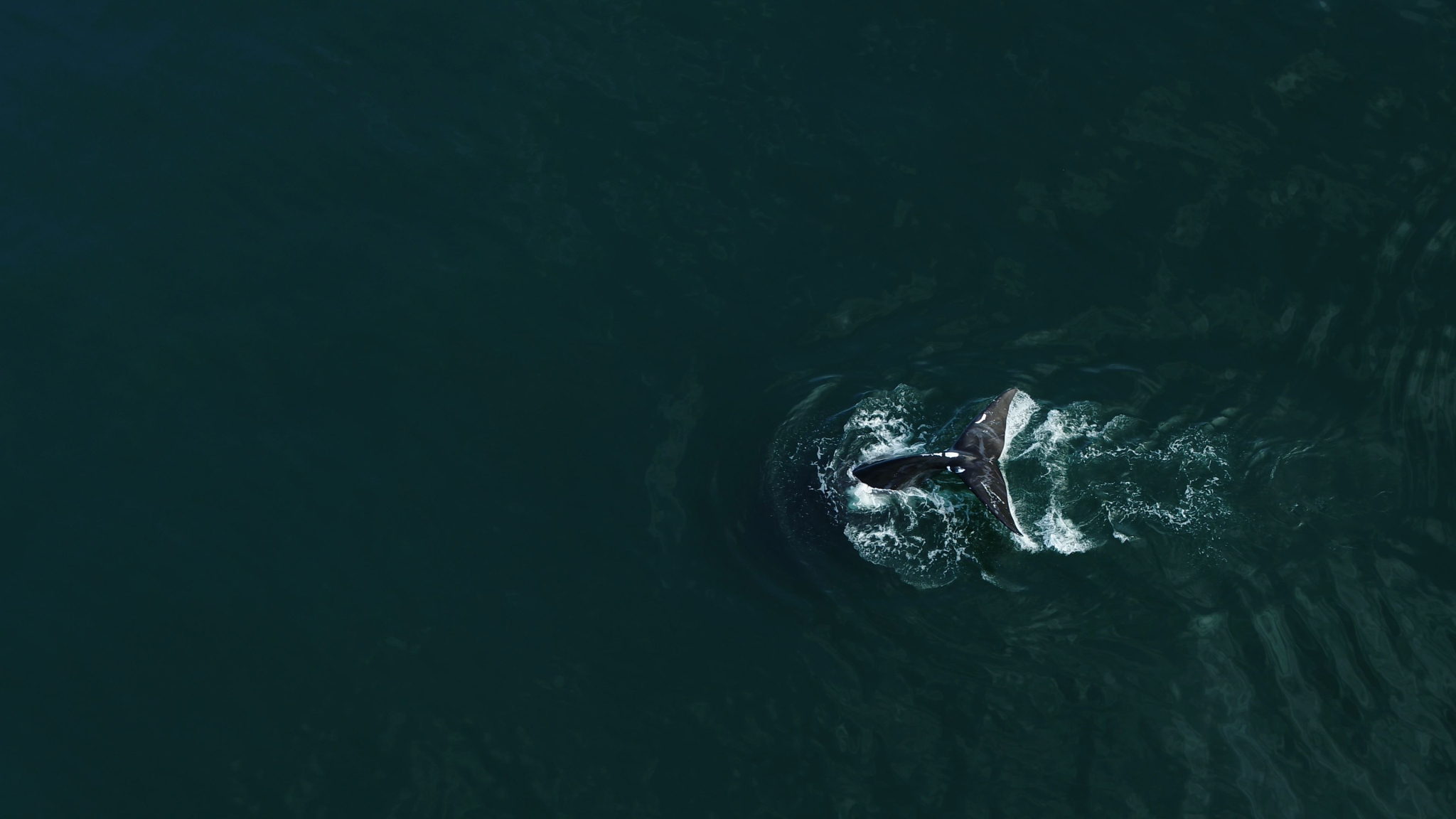 Meridian fluking in 2020 in the Gulf of St. Lawrence. Photo by Nick Hawkins under SARA permit from the Department of Fisheries and Oceans
Previous story

Until he was 28 or so, a North Atlantic right whale named Meridian spent most of his time in the Bay of Fundy, swimming mouth open through zooplankton and sieving prey through his teeth-like baleen. A scar runs across his head, forward of his blowhole — a big arching line, like a meridian line on a globe.

Many other right whales have similar scars, caused by the all too common occurrence of entanglement in fishing gear as they migrate up and down the Eastern Seaboard. On June 30, Meridian was seen snarled up for the fifth time by Fisheries and Oceans Canada (DFO). Now 38, he swims mostly around the Gulf of St. Lawrence after climate change-induced warming in the Gulf of Maine disrupted previous feeding habitats.

DFO spotted Meridian again on July 7 but said bad weather prevented them from trying to remove the fishing gear. He hasn’t been seen since, which although not unusual, is concerning because fishing gear entanglement is the leading cause of death for right whales, which have been listed as endangered since 2005 under the Canadian Species at Risk Act. Numbers have steadily decreased since 2011 when the population was at around 481. Now, there are approximately 350 right whales.

DFO, Transport Canada and the U.S. government have taken some steps to curb the decline, including slowing boat speeds and closing some areas to fishing seasonally or in response to whale sightings. But experts say there are additional measures that could save whales — such as changes to rules around types of fishing gear — that aren’t being enacted.

Meridian’s mother, Slash, was likely killed by a ship strike in 2011, the other main cause of right whale fatalities. Before her death, Slash and Meridian were photographed together by the New England Aquarium (NEAQ), which has used photo-identification to document the whales since the 1980s. Individual right whales are recognizable by callosities — patches of tissues that serve as habitat for little white crustaceans — the pattern of those patches making it possible to identify them from photographs.

Marine biologist Philip Hamilton, senior scientist at NEAQ who has studied the species since 1986, said he recognizes the different whales and can name them when he sees them. The aquarium maintains a species-wide catalogue of all photographed right whale sightings, called the North Atlantic Right Whale Catalog. Although he doesn’t remember the first time he saw Meridian, he has lots of memories from his days in the field (he now does more administrative work) spotting him and other whales.

“Every time I see Meridian, or any other whale that I recognize, it’s not quite right to say it's like seeing an old friend because, you know, he has no relationship to me … it’s a sort of one-sided, voyeuristic friendship,” said Hamilton, with a laugh on the end of the phone line.

Seeing any whale entangled is cause for alarm, said Hamilton. In Canada, entanglement falls under DFO’s jurisdiction, and vessel strikes are the responsibility of the Ministry of Transportation (TC) to negate. Every year, TC and DFO work together on mitigation measures that are enacted between April and November when the whales are most active in the Gulf of St. Lawrence — where Meridian was seen entangled. Slower boat speed limits, a restricted area for boats and requiring harvesters to move their gear if a whale is spotted were part of the 2021 plan, which is set to be the same this year.

A North Atlantic right whale named Meridian made headlines recently after it was spotted entangled in the Gulf of St. Lawrence. Here's his story.

The past two years have seen no whale deaths, following an especially concerning period between 2017 and 2019. Nine right whales were killed around the Gulf of St. Lawrence in 2019; 12 were found dead in the area in 2017.

However, as in the case of Meridian, whales are still being entangled and the population is still declining. Entanglement can kill whales by causing drowning, starvation or injury, but also affects their size and reproduction, said Hamilton. Female whales used to reproduce every three years on average, but now birth calves every 10 or so. This is, in part, due to entanglement, but also diminished food sources.

Right whales' struggle predates entanglement and ship strike issues. For thousands of years, Miꞌkmaq in the area used the whales for food and other things — the oil for heat, the bones for tools. But in the 1500s, fishers from abroad travelled across the Atlantic and overfished the whales almost to extinction. A fishing ban was put in place in 1935, but the whales have been recovering at a slow rate.

When Hamilton started his research in the 1980s, entanglements occurred but were less severe and frequent. The strength of rope has steadily increased over the past few decades — from weaker biodegradable hemp to materials like Polysteel, which can actually wrap around whales and cut through into their bones.

He points to places like Australia that have used whale-safe pop-up gear, which doesn’t run a rope from a trap at the bottom of the ocean to a buoy floating on the surface. Instead, acoustic signals are sent to find the trap on the ocean’s floor, which triggers the release of the buoy and rope or inflates a pouch to float the gear to the surface. It takes longer and poses some difficulties for fishers, but would help the whales if Canadian fishers adopted something similar, said Hamilton.

Another meaningful change would be rules around rope strengths. If ropes were weaker and broke when a whale swims through the vertical line from crab and lobster traps, injuries would be less serious. The South Shore lobstermen in Massachusetts created a type of retrofitted line that breaks under about 1,700 pounds of pressure in an effort to reduce the impact of entanglements.

Canada was supposed to have whale-safe gear in place for the 2022 fishing season but delayed it to 2023 due to COVID-19 preventing harvesters from adequately testing out gear, said the department.

“There has not been any significant new data that would warrant any major modifications to the 2021 measure to the upcoming season. Therefore, the department is not recommending any changes to the 2022 measures from those implemented in 2021 and 2020,” reads part of a briefing note Canada's National Observer obtained through an access-to-information request.

The note continued to say, “DFO is not recommending any significant changes to their measures for reducing the entanglement in fishing gear.”

In a statement to Canada’s National Observer, DFO said some of Hamilton's suggestions would be implemented next year. Specifically, “it will be mandatory for fishing gear to include low breaking-strength rope or other devices in the buoy line that will allow the line to break at 1,700 pounds of force. As various fisheries operate under different conditions, the precise devices to be used will vary by fishery.”

Canada and the U.S. should be working together to implement whale-safe gear as soon as possible, said Hamilton, who noted further protection around vessel strikes is also important.

Until then, whales like Meridian will continue to move through the Atlantic obstructed by a slew of obstacles that could ultimately lead to their deaths. Still, Hamilton said they have the potential to recover.

“... The species has adapted to changing oceans plenty of times in their history, including the Little Ice Age in the 1500s,” he said.

“They can definitely do it. We just have to, frankly, stop injuring and killing them.”

Can anything else be blamed

Can anything else be blamed on the pandemic?!! Obviously DFO cares more about their paychecks than they do about wildlife!!