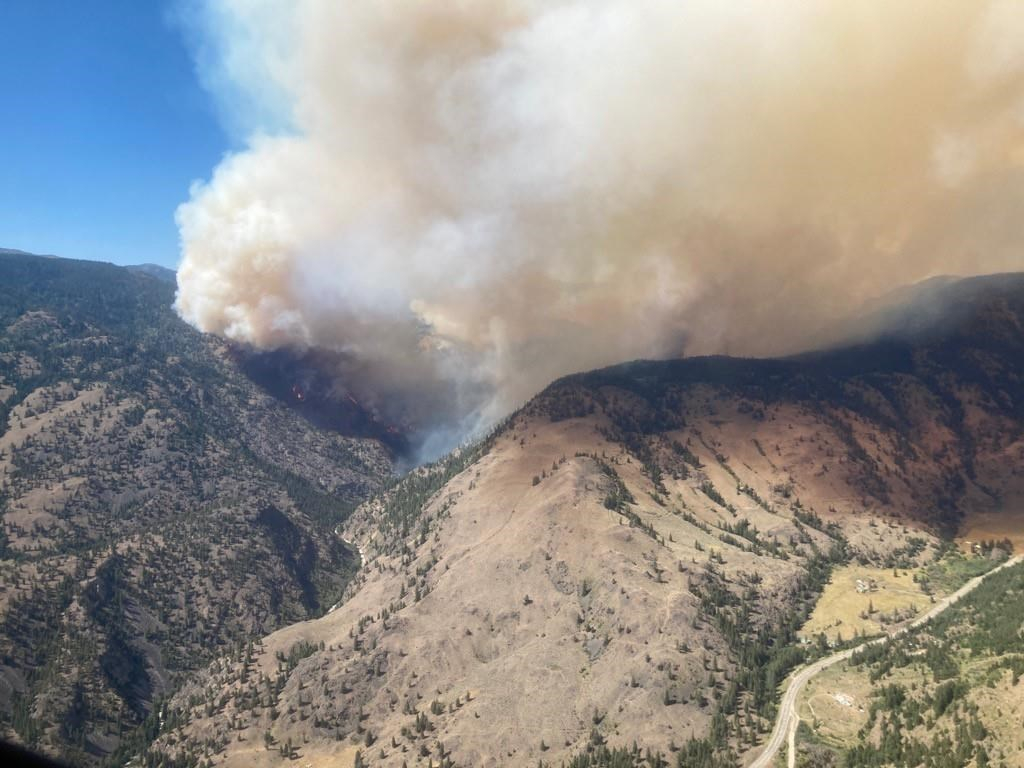 The southwest corner of the Keremeos Creek wildfire is shown in a July 31, 2022 handout photo. Handout photo by BC Wildfire Service
Previous story

A growing wildfire in British Columbia’s Okanagan area, about 21 kilometres southwest of Penticton, has prompted evacuation orders for hundreds of properties in the area.

Bryan Zandberg, information officer for BC Wildfire Service, said the Keremeos Creek blaze has now scorched over 22 square kilometres of ground and described it as "vigorous."

"There might be some gusts of wind. There was even a possibility of a thunderstorm today from the weather report that we were getting. Obviously, that’s concerning," he said while giving an update on the fire Monday.

"It’s quite hot, but a few degrees cooler than it has been in recent days."

Environment Canada said while there is a heat warning in effect for the Okanagan, the mercury is expected to drop Tuesday with more seasonal temperatures returning Wednesday.

A "small cabin" that was unoccupied was destroyed in the fire and there were no injuries reported, said Erick Thompson, information officer from the Regional District of Okanagan−Similkameen emergency operations centre.

Zandberg said dry grasses and shrubs and low humidity are helping "unorganized growth" of the fire. There is some help from a weather pattern called inversion where a band of air pushes the smoke back down on the fire, seemingly cutting off its oxygen, he added.

But that weather pattern breaks down when the temperatures hit 27 or 28 C and the fire starts to roar again, he said.

Much of the blaze is in steep and inaccessible terrain and crews are concentrating their efforts on areas affecting residents, he said.

Temperatures are expected to be cooler Monday and over the next few days, which will help firefighters, Zandberg added.

"We are in desert country here," Zandberg said. "So there are well−cured fuels for the fire to get into. We do have localized weather conditions such as winds that will push the fire, not in an organized way."

The fire is "expanding outwards" but not travelling along a defined path, and setting not just vegetation on the ground on fire but some tops of trees too, he said.

"Overall, though, it is not a very organized fire."

The BC Wildfire Service said another blaze, which is about 1.7 kilometres northwest of Lytton, on the west side of the Fraser River, has not seen much activity. It is about 32 square kilometres in size.

The rocky slopes and sparse fuels have slowed fire growth in certain areas, it said. Temperatures are expected to decrease Monday and the fire behaviour will mainly depend on winds, it added.

The fire is suspected to be human caused.

This blaze is burning across the Fraser River from Lytton, which was left in ruins after a different wildfire swept through the village last year.

This report by The Canadian Press was first published Aug. 1, 2022.