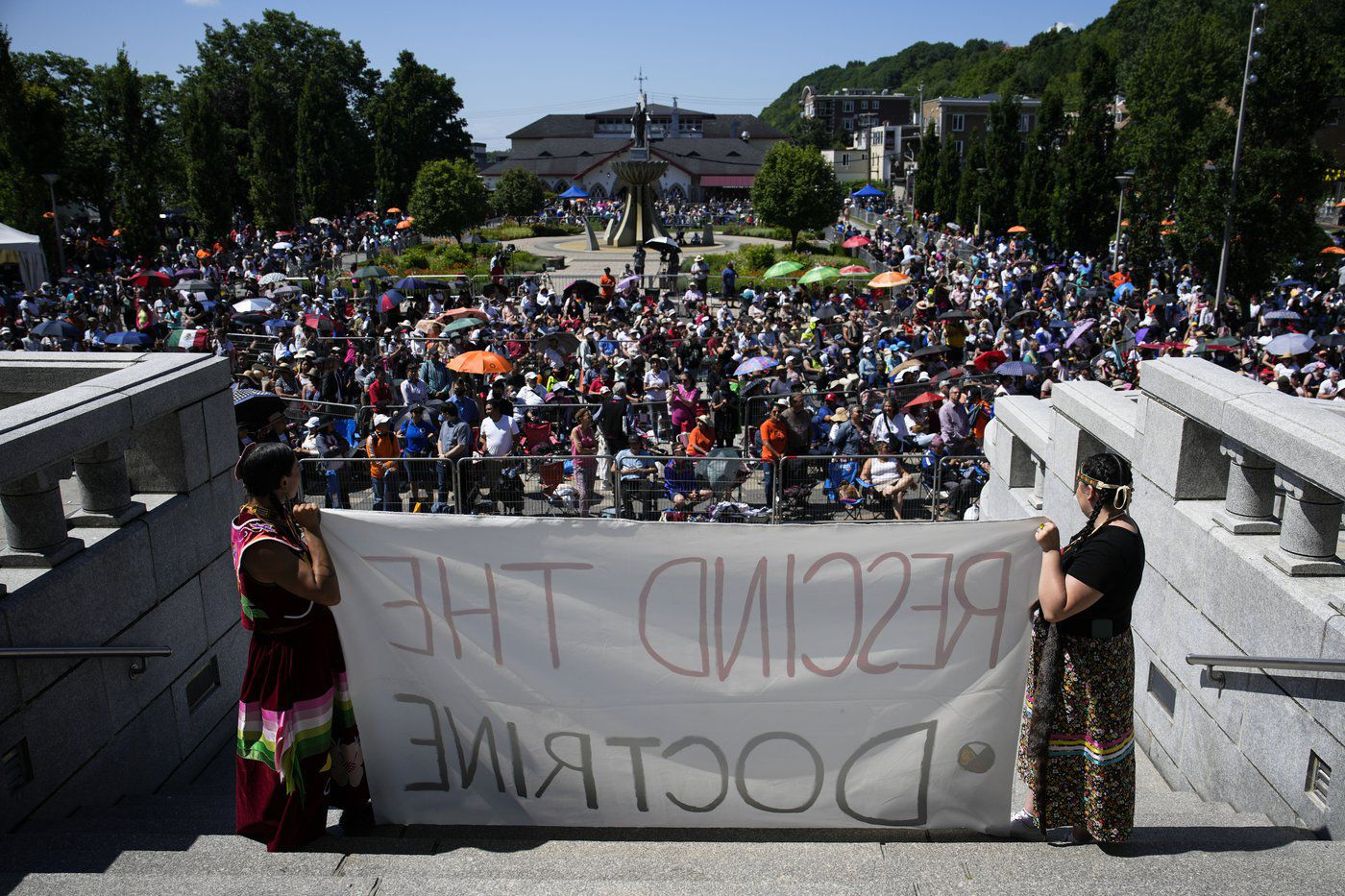 Sarain Fox, left, and Chelsea Brunelle of the Batchewana First Nation demonstrate outside the mass presided over by Pope Francis at the National Shrine of Sainte-Anne-de-Beaupré, on July 28, 2022, in Ste-Anne-de-Beaupré, Que. (AP-John Locher)
Previous story

As Pope Francis travelled across Canada, so did a demand to revisit centuries-old declarations.

At the front of a basilica in Quebec, where the 85-year-old pontiff prepared to preside over mass, Sarain Fox and her cousin stood in silence, holding a banner with the words "Rescind the Doctrine" emblazoned in red and black paint.

"It felt like the resistance that was missing," said Fox, who is from Batchawana First Nation.

Days earlier in Maskwacis, Alta., after the Pope finished delivering his apology to residential school survivors for the first time on Canadian soil, a shout came from someone in the crowd.

"Repudiate the Doctrine of Discovery," the voice cried. "Renounce the papal bulls."

The Truth and Reconciliation Commission of Canada's final report helps unravel exactly what these are — and why the Pope was met with demands to publicly reject them.

The report is based on statements from nearly 7,000 Indigenous survivors who were forced to attend residential schools, where abuse was rampant and they were denied the ability to speak their languages or practise their spirituality.

The six-year investigation into the government-funded, church-run system traced its roots back to the imperial world and the role of the Catholic Church, which operated more than half of the residential schools in Canada.

"The Pope and the Catholic Church are ground zero for the genocide that we've endured," said Eva Jewell, who is Deshkan Ziibiing Anishinaabekwe and a research director at the Yellowhead Institute.

"I don't think it's in any way unjustified for Indigenous Peoples to expect a lot of things from the Pope, because so much of our world and nationhood has been stolen by this particular church."

More than 500 years ago, Pope Alexander XI issued the first of a series of edicts, known as papal bulls.

"These orders," according to the commission, "helped shape the political and legal arguments that have come to be referred to as the 'Doctrine of Discovery,' which was used to justify the colonization of Americas in the 16th century."

"It is just fundamental to understanding colonialism," said Matthew Wildcat, a professor at the University of Alberta and member of the Ermineskin Cree Nation.

"At the level of the general public, it has become much more prominent as a concept."

The commission detailed how the 15th-century doctrine was connected to thinking that lands being colonized were empty, when in fact Indigenous people called them home.

In its 94 calls to action, the commission instructed all government levels, religious groups and signatories to the historic Indian Residential Schools Settlement Agreement to repudiate this notion.

It said they should instead adopt the United Nations Declaration on the Rights of Indigenous Peoples, which spells out the need to recognize their inherent rights.

"You can't really talk about the UN declaration without talking about the Doctrine of Discovery," said Hayden King, Yellowhead Institute's executive director.

"It's this philosophy that emerges from conquest that Indigenous people should not be treated as having any rights or laws or humanity generally."

That's why "people want to see it addressed," said King, an Anishinaabe from Beausoleil First Nation, "because that's ultimately what underlies all the policies that came after it."

Following Francis's apology, which did not mention the doctrine, Western University professor Cody Groat observed how the commission's call for a papal apology didn't explicitly say the Pope should address it in his words.

The member of Six Nations of the Grand River said he sees the way communities have taken up the call for the Pope to do so as reflective of tensions around Indigenous sovereignty within Canada.

"Our systems of sovereignty and our systems of governance have been minimized through documents such as (papal bulls) … that we are not true sovereign entities."

In response to criticism from Indigenous leaders, papal visit organizers said the Vatican clarified previously how the doctrine has "no legal or moral authority" in the church and how Francis, in his apology, condemned ideas associated with it, such as assimilation.

Assembly of First Nations National Chief RoseAnne Archibald says that's not the same as revoking it outright, which she believes must happen.

"I've always said we need a new papal bull to talk about the value and worthiness of Indigenous Peoples and cultures around the world," she said Friday.

"Things have to be corrected in this society that stem from the Doctrine of Discovery."

She cited the return of Indigenous land as one example.

Jewell says it's important for those who are not Indigenous to know Indigenous people like herself grew up learning about the doctrine as the "source of colonialism" thanks to elders and longtime rights advocates.

The desire to see it revoked "has always been there," King added, saying the difference now is Indigenous people have found their voices amplified through movements like Idle No More, and the commission's findings about residential schools.

Though Pope Francis did not include the doctrine in his apology, organizers of his trip have since said Canadian bishops plan to work with the Vatican to have it addressed, "with the goal of issuing a new statement from the church."

Fox said she was expecting some pushback to the protest she and her cousin staged at the mass, but she left feeling proud. Reflecting on the moment makes her emotional.

'"Rescind the Doctrine' — it just felt potent and powerful."

"The outpouring of support from both Indigenous and non-Indigenous people from around the world has been incredible."

This report by The Canadian Press was first published July 30, 2022.