Terrell Roulston shares the science behind being the bees’ best friend 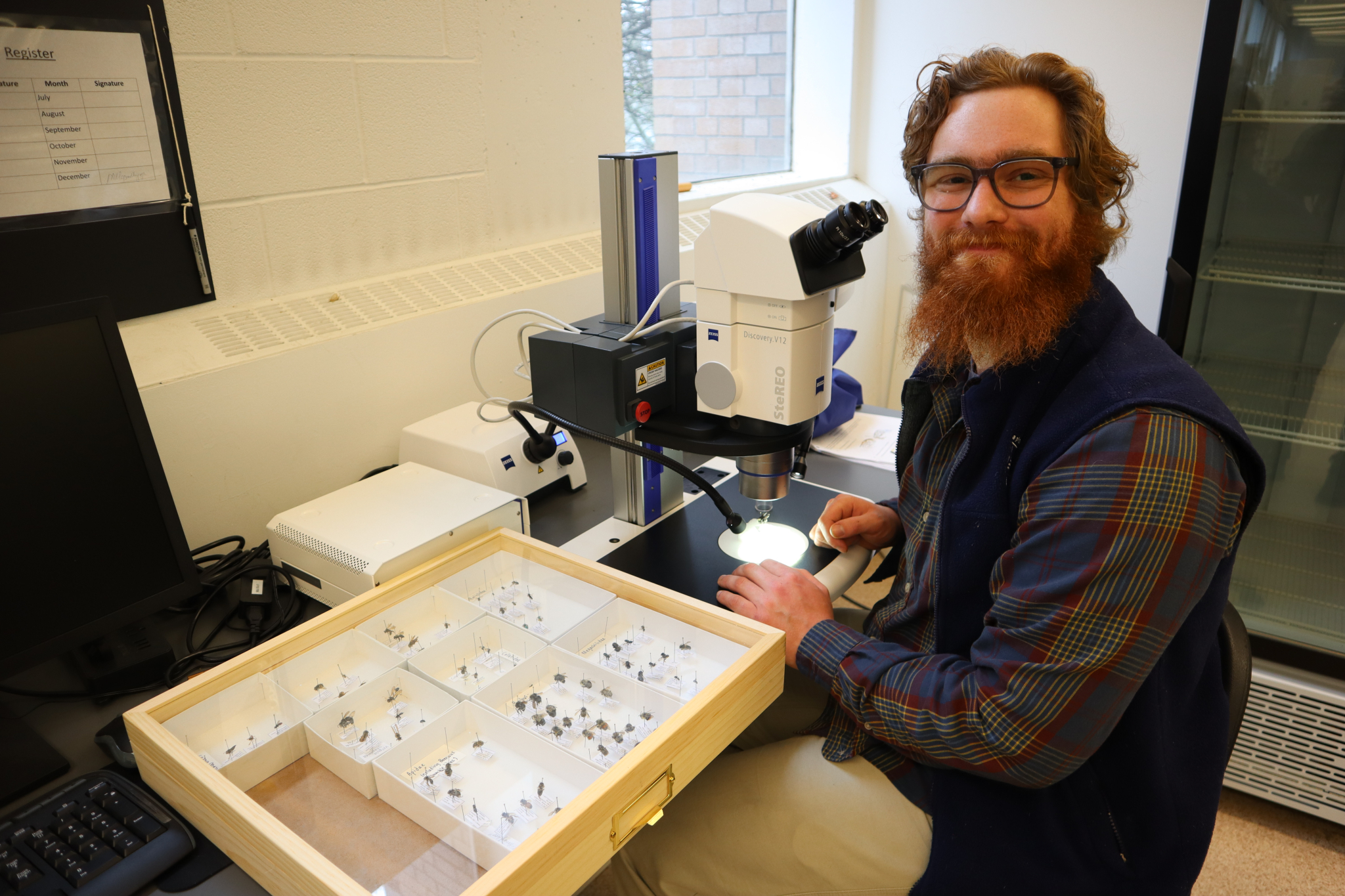 In his master’s degree at the University of British Columbia, Terrell Roulston is applying his knowledge to bee health in the Pacific Northwest. Photo by Jens Ulrich
Previous story

During his undergraduate studies at St. Mary’s University in Halifax, this 22-year-old helped discover there are many more bees in Nova Scotia’s salt marshes than previously thought.

In his master’s degree at the University of British Columbia, he is applying his knowledge to bee health in the Pacific Northwest.

Most farmed land in Nova Scotia is on lands diked to hold back ocean flooding. Researchers increasingly see replacing dikes with salt marshes as a viable nature-based solution with many benefits. My work helped to show that native bee species and other pollinators are relatively abundant in salt marshes and when left alone, pollinator populations thrive in short periods of time, which in turn results in increasingly resilient marsh lands.

Farmers need bees and pollinators to produce crops. We now know that if we encourage salt marshes, we can save farmers tens of millions they now spend importing honey bees (Apis mellifera) as the salt marshes will provide this service for free. In addition, since native bees and other pollinators are more effective than honey bees, crop yields will increase. Salt marshes are an excellent nature-based adaptation and mitigation tool for managing rising sea levels resulting from climate change and are more cost-effective than dikes. Decision-makers have even more reasons to leave salt marshes alone and encourage the emergence of new ones.

What is your work in the Pacific Northwest?

During his undergraduate studies at St. Mary’s University in Halifax, this 22-year-old helped discover there are many more bees in Nova Scotia’s salt marshes than previously thought. #YouthClimateAction

Another bee species, Bombus impatiens, was introduced in British Columbia in the 1990s by commercial greenhouse operations that lacked a complete understanding of the potential impacts. Predictably, despite efforts to contain them, they escaped and are now a threat to ecosystem integrity from Vancouver to potentially as far south as northern California. They threaten local pollinator populations because they are effective competitors and also exploit resources into the fall, later than most other native bees. Many native bees and native plants have a specialized relationship — meaning if you lose one, you lose the other, so ecosystems in the region may change. Scientists are watching with concern.

Flowering plants are by far the most numerous plant species and 85 per cent require pollination. Without pollinators, humans have no food. Any threat to bees must be taken very seriously.

How did you come to be so interested in bees?

I grew up on a farm in the Annapolis Valley in Nova Scotia and my dad kept bees. As a small child, I enjoyed helping him split hives and take honey. The vast majority of bees are very docile and I felt calm amongst them. When the opportunity came up to participate in bee research during the summer after my first year of university, I jumped at the chance.

In Grade 6, we were tasked with measuring our carbon footprints. I was shocked at mine and even then felt compelled to reduce it and do much more to resist climate catastrophe. In Grade 8, we watched a David Attenborough film and felt invited into a world of wonder — which together with my parents’ commitments to curiosity and questioning received wisdom, has made me the curious scientist I am today.

I have attention deficit hyperactivity disorder, which adds to the feeling of overwhelm. It is hard to be a student. The level of complexity facing all scientists is significantly greater than ever before and as the ones who do the field research, this necessarily trickles down to us. We are expected to do much more than previous generations. The cost of everything from tuition to housing and food is high and the pressure to succeed in our fight to preserve a habitable planet is all-consuming. Combine that with the isolation and uncertainty of the pandemic, and burnout is commonplace.

Governments and non-governmental decision-makers in industry and civil society are changing, even if it does often seem too little too late. Regardless of their discipline or area of interest, my peers are so awake and committed it seems impossible that we will not succeed.

Raise your hand. I was just a kid from a farm and really had no clear idea about what scientists did. But when a professor said she knew of an opportunity to research bees in the summer and invited anyone interested to contact her, I plucked up my courage and knocked on her door. Without taking that first nervous step, I would not be where I am today.

Great change is needed to save the world for human habitation. When you hear young people agitating for bigger, faster changes, acknowledge the truth that we are not wrong. Yes, in the past change has happened slowly. But we have run out of time. We need your wisdom and experience to help us do big things really fast.

Duncan Martin believes in communities’ power for the future