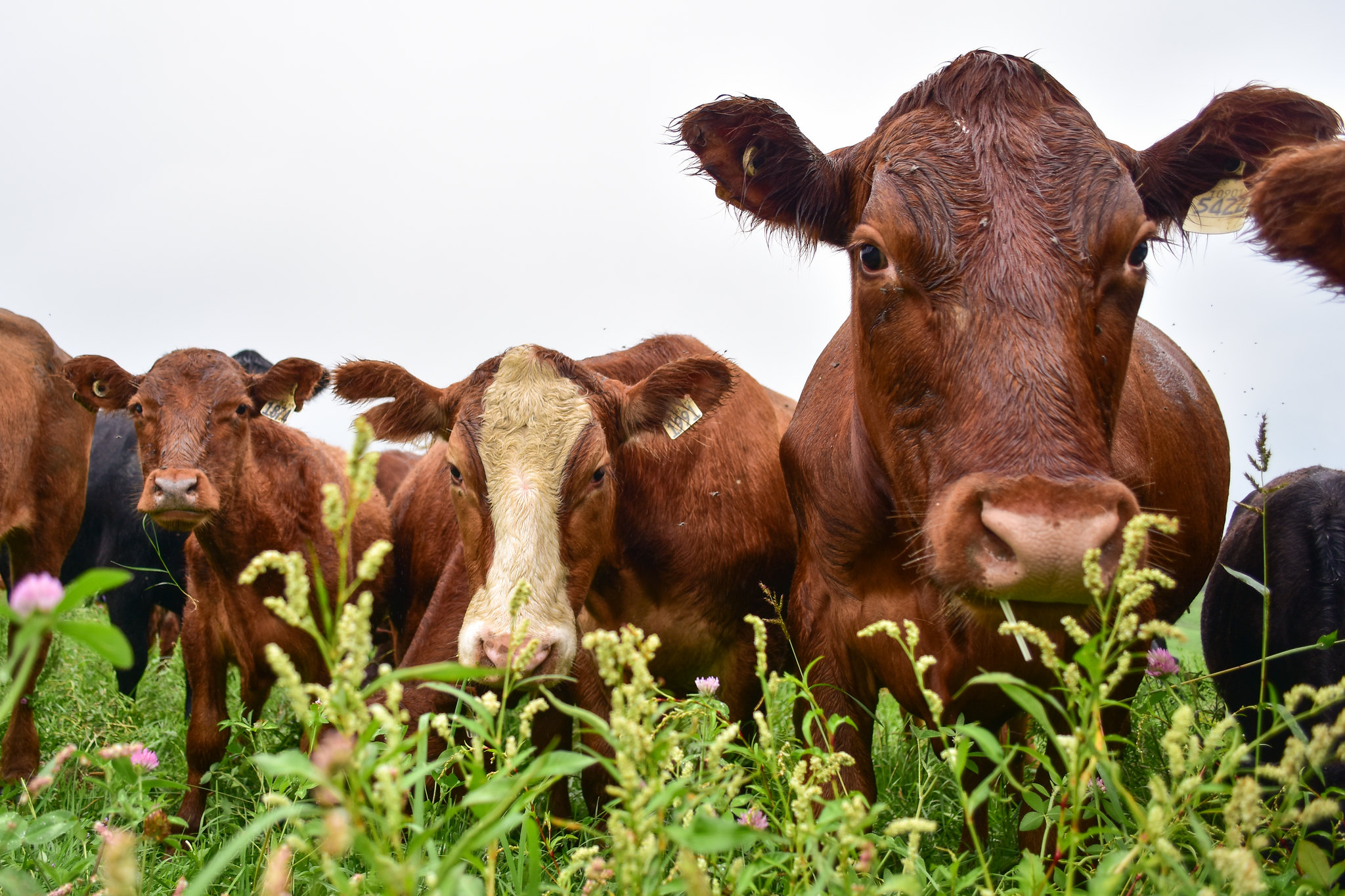 Canadians consuming less meat and animal products could help Canada achieve its climate targets. Cows are particularly emissions-intensive because they emit methane when they eat. Photo by Kath Clark/USC Canada via Flickr (CC BY 2.0)
Previous story

Canadians could help the country meet its climate targets by cutting their meat and dairy consumption in half by 2050, a new report suggests.

Canada’s goal is to reduce planet-warming greenhouse gas emissions to at least 40 per cent below 2005 levels by 2030 and achieve net-zero emissions by 2050. While the Liberal government has outlined how it plans to achieve this in its 2030 emissions reduction plan, an assessment from the Canadian Climate Institute found the plan still puts Canada short of its goal by nine megatonnes.

That gap could be closed if Canadians consumed 35 per cent less meat and dairy by 2030 and 50 per cent less by 2050, according to the report from animal rights non-profit World Animal Protection and Navius Research, an energy-economy research consultancy.

For the report, Navius used an energy-economy modelling tool to determine how Canadians’ consumption of animal products would affect both the country’s greenhouse gas emissions and the cost of achieving its climate targets. The study modelled three different scenarios where Canadians cut back on animal products anywhere from two to 48 per cent by 2030, and 20 to 84 per cent by 2050.

Researchers also accounted for the fact there would be an increase in emissions from plant-based agriculture.

“We wanted to look at the potential for reducing our climate change footprint in Canada by moving away from diets high in animal protein,” said Lynn Kavanagh, farming campaign manager at World Animal Protection.

Canada's agriculture sector currently emits 91 megatonnes of greenhouse gas emissions, accounting for about 12 per cent of the country’s total.

While there is already ample research on how animal agriculture contributes to greenhouse gas emissions, Kavanagh said it had never been put in a Canadian context.

“The Canadian government has not really acknowledged animal agriculture as an important source of greenhouse gas emissions,” she said.

She hopes this report will encourage the government to recognize this and also promote Canada’s Food Guide, which is largely plant-based.

Canadians could help the country meet its climate targets by cutting their meat and dairy consumption in half by 2050, a new report suggests.

Moreover, Canada could save money if people ate less meat, the report finds. Its most ambitious scenario — where Canada’s animal consumption drops by nearly 50 per cent by the end of the decade — suggests reaching Canada’s 2030 climate targets could cost 11 per cent less.

If emissions from the agriculture sector — which includes all meat, dairy and plants — are lower, then fewer reductions are needed in other sectors to achieve the 2030 climate target, though Canada will still need to dramatically reduce its emissions overall to reach net-zero. Those savings would come from not having to invest as much in new technologies to reduce emissions before the end of the decade or purchase offsets if emissions can’t be reduced, according to Brianne Riehl, the communications manager at Navius Research.

“So by reducing emissions in one sector, we make it less costly for the whole economy to achieve the [emissions] target,” Riehl said.

The scenario where Canadians ate fewer animal products could also save the agriculture sector $12.5 billion by 2050. To reach Canada’s emissions goals, Riehl says the sector will have to invest in emissions-reduction technology or pay for offsets. Farming plants, instead of animals, would do the trick.

Animal agriculture creates greenhouse gas emissions for several reasons, according to Navin Ramankutty, an agricultural geographer and professor at the University of British Columbia who wasn’t involved with the report.

Animal production is a big contributor of methane — a greenhouse gas over 25 times more potent than carbon dioxide over a 100-year time frame. Cows, for example, emit methane while they are eating.

Further, raising animals for consumption takes much more land and resources than growing plants for food. A lot of animals are fed grains, like soy and corn, which then get converted into animal protein. Humans could eat those plants directly and save a lot of energy in the process.

Finally, the fertilizer used on farms to grow the grains that feed animals also releases nitrous oxide, another greenhouse gas.

“The footprint of that animal production is huge,” Ramankutty said.

What is horticultural therapy?

Still a simplistic approach. Until we factor in the percentage of current farm land that was original prairie and so dry land farming....until we solve the conundrum of how quickly bare soil dries under the sun....until we eliminate slave labour, temp foreign workers from our 'plant based agriculture' and factor in decent wages for our farm workers..........until we calculate the amount of water needed for plant based agriculture as opposed to grass fed animal product........and until we eliminate the franken food corporations eager to come in and turn monocultured peas into pseudo meat...........we're riding off on a jet fueled certainty that is anything but certain.

I suspect the solution is much more diverse and various.........as the earth is diverse and various. In some places vegetables and fruits: the Okanogan comes to mind. In other places free range animals, moved so that the grasslands that should never be plowed continue to sequestor the CO2 and other greenhouse gases that our industrial lifestyle is more responsible for creating, than any of God's creatures.

We need more re wilding. But we can't have rewilding.........and the total removal of people from the grasslands of the world. Before we get too excited about the coming salad days..........I'd like to know what percentage of the arable land that is left is grassland. What percentage is water rich? What percentage is jungle? Do the folks intent on blaming cows for the methane dangers we face, have anything to say about palm oil plantations, or the number of frankenfoods being produced now that depend on an industrialized third world form of agriculture that is far more unnatural than animal husbandry............Those palm oil plantations carved out of jungle...

But hidden away in the third world, for the benefit of Food Processors everywhere?

I do think we need to eat less meat and dairy...but we also need to talk about how animal husbandry has to be rescued from Big Ag suits that oppress both livestock and farmers. And we need to see their tyrannosaurus Rex footprint in our imports.

I've read of rivers run dry by the growth of avocados for western tables. Almond milk is more than a little costly for the water needs of California...with climate change, those orchards likely don't have a future.

Take a drive down to southern Alberta....or Saskatchewan. If you want to see lands doomed to desertification in the coming years....if we continue to plow them for conventional agriculture, instead or rewilding them with the native fescue that will sequestor more carbon than any other land form.

Once we do the right thing by our prairies...I suspect sustainable grass fed ranching will be what grows those sequestoring roots and fertilizes their future good work.

In short: One size does not fit the earth we live on. And city people need to spend a couple of weeks a year working on a variety of farms......to get the real picture on the agriculture of the future. Diversity isn't just a politically pretty word.

It's what's kept this living planet, living. We'd better get in synch with the Great Mother....she has a pretty good thing going....from which, modernized western thinkers likely have a lot to learn.

Lord lord lord, this is SUCH

Lord lord lord, this is SUCH old news. Known as far back at least as the early 70s.

And yet governments keep plowing our tax dollars into animal farming (with all its attendant horrors, for the animals and for us, and for the planet), rather than plant farming

Clear who has the most vocal and well-established lobby group.......

No mention of the billions in

No mention of the billions in subsidies given to meat and dairy industries? Individualist solutions from the bottom up are not going to make things happen fast enough.