Auto industry greed stands between us and a climate-safe future 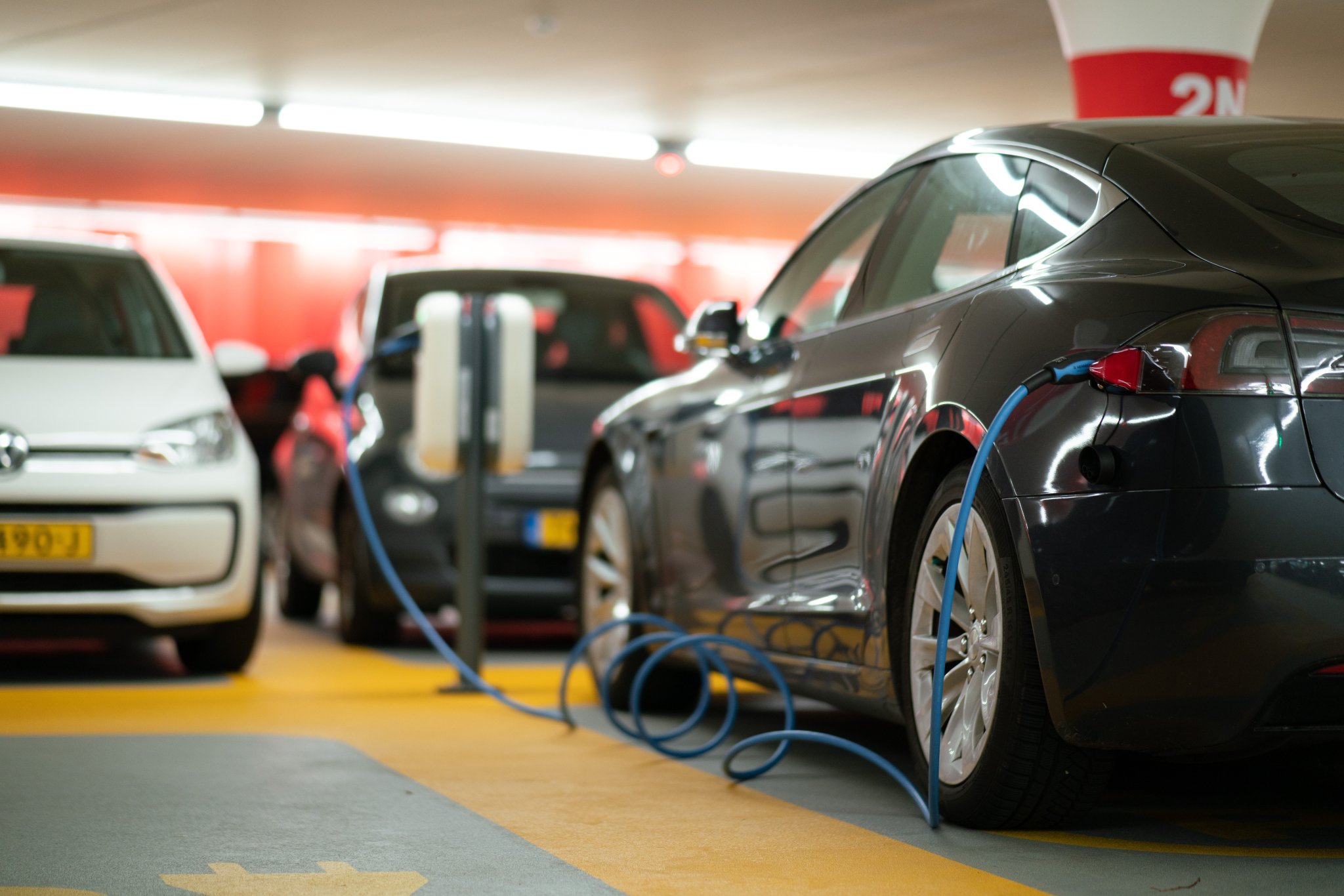 Canadians want to buy electric vehicles, but can’t get their hands on one. Photo by Michael Fousert/Unsplash
Previous story

The transportation sector is the second-largest source of pollution in Canada, accounting for one quarter of our annual emissions. If we want to meet our climate targets, 100 per cent of all new cars sold must be electric by 2035. This goal was affirmed by Canada with a joint declaration at COP26 in Glasgow. Right now, the clock is ticking to put in place the policy measures needed to ensure we can rapidly transition the auto industry towards this goal.

Car corporations love to make commitments about shifting to zero-emission vehicles in public because it makes their stock price go up. But behind closed doors, they are using their industry associations to fight against regulations that would require them to meet their green pledges. Canadians are ready to make this shift — it's automakers that are holding us back.

According to a recent Abacus Data poll commissioned by Environmental Defence, Équiterre, Ecology Action Centre and The David Suzuki Foundation, 70 per cent of Canadians indicated that long wait times were making them less likely to purchase a zero-emissions vehicle (ZEV).

Canadians want to buy electric vehicles, but can’t get their hands on one. Just last year, a majority of Canadian car dealerships (55 per cent) reported they don’t have a single electric vehicle in stock, and nearly two thirds (64 per cent) reported wait times for electric car orders of three to six months. These wait times have only gotten significantly worse after gas prices increased, with reports now indicating buyer wait lists up to three years long.

The federal government isn’t alone on this — British Columbia, Quebec, California and 15 other U.S. states all have these regulations in place, and the U.K. will have one enforced beginning in 2024.

The same Abacus Data poll found that the majority of Canadians (58 per cent) support this plan and want to see the federal government stepping in and imposing financial penalties on vehicle manufacturers who don’t meet sales targets. To meet sales requirements, automakers comply by increasing investment in ZEV production, spend more on research and development and lower ZEV prices directly by reducing their markups, but this would also involve a profit squeeze. Canadians overwhelmingly support these outcomes, such as increased investment (83 per cent), more equitable access Canada-wide (84 per cent) and reduced prices (86 per cent).

Profits are fundamentally what the conflict over the path to 2035 is about. Automakers currently set their prices and allocate their investments towards what makes them the most profit — higher-margin, fuel-inefficient SUVs and pickups.

Car companies would rather sell you a gas guzzler instead of an electric car because they make more money that way. The auto lobby is fighting against enforcing ZEV sales targets because it would disrupt their profit-maximizing sales plans.

It's clear Canadians care more about the future of the planet than the bottom lines of multinational car corporations. According to the same Abacus poll, 74 per cent of Canadians think automakers have a responsibility to shift towards making zero-emission vehicles and away from gasoline vehicles — even if it means reducing their profits.

It's right to ask that polluters pay their fair share for the transition to a clean economy. They certainly can afford it. Last year, the “big three” North American manufacturers, Ford, Stellantis and General Motors, collectively made $41.5 billion in operating profits.

Looking at foreign manufacturers, Toyota made $25.1 billion and Volkswagen made $27 billion. General Motors even recently announced that it will be buying back $5 billion of its shares and boosting dividends instead of accelerating ZEV investments.

The federal government shouldn’t delay in moving forward with a clean car standard or give into pressure from auto industry lobbyists who want the plan scrapped. We can’t let the greed of the auto industry stand between us and a sustainable future.

Article: "Automakers currently set their prices and allocate their investments towards what makes them the most profit — higher-margin, fuel-inefficient SUVs and pickups."
Market failure. Federal governments need to step in and correct the market failure. Raise the price of "gas guzzlers" to reflect their true climate, environmental, and health costs.

No one should be under the illusion that EVs take us down the road toward a sustainable future.
Today freeways are clogged with thousands of single-passenger vehicles. Dreams of a world clogged by EVs perpetuate that same freeway nightmare, just powered differently.

Cars would not be sustainable even if they ran on fairy dust. EVs have a huge footprint. Sprawl is hopelessly inefficient. An ecological disaster. The private automobile and the sprawl it perpetuates are a costly detour away from sustainability.
EV cars just perpetuate (if not exacerbate) all the ills of car culture without proportionate benefits on the climate front. While displacing or eliminating better options.
A world of EVs in sprawled cities put our only sustainable options out of reach. EVs perpetuate a litany of environmental problems that public transit and smart urban design can solve.

What EV advocates propose is another environmental disaster — just a different one.

There isn't enough lithium, cobalt, nickel and other battery metals in the world to replace all internal combustion engines on the planet, or to replace the energy density of refined petroleum liquids in transportation. This is complicated by additional pandemic-related supply chain issues in things like microchips, something inexcusably not mentioned in the article. Car manufacturing shared supply chain interruptions with musical instruments, fridges, computers, lumber and millions of other consumer goods.

Meanwhile, oil has dramatically increased in price because Vladimir Putin has delusions that he is Peter the Great II and deserves an expanded empire. Clearly, this little man was bullied as a child and thinks he can pummel NATO by attempting to wipe Ukraine off the map. The result is a mass withdrawal from once very cheap Russian oil and gas by Russia's primary customers who foolishly allowed themselves to become addicted to it. A stratospheric world price reduces demand significantly.

Supply constraints and higher prices means there is an involuntary plateau or falldown in car dependency coming, both electric and fossilized. This dovetails with the deeply researched conclusions made in 2015 that world car dependency has peaked (Newman, Kenworthy, 2015) which were mainly attributed to the construction of mass transportation (primarily urban metro systems) in Asia and Europe over the last 25 years.

EVs will dampen the North American demand for Canadian oil, and that is a good thing. But there are resource limits that will ultimately reduce the excessive numbers of cars on the roads, and the vast land area required for them, or cause families to enter an unfortunate poverty cycle from having to operate multiple cars must to make a living. Any resource constraints that affect car dependency can only be a good thing for efficacious urbanism in the long run.

Many major cities have been dismantling freeways and liberating prime waterfront freeway land for human beings for years. Seoul and Paris are two of the most noteworthy. Other cities, like Vancouver, have created the conditions through zoning (higher density, mixed uses, transit build out) to reduce traffic in the inner city by double digits -- while doubling the downtown population and lowering emissions -- and were able to liberate road lanes for bike and pedestrian traffic. The Burrard Bridge alone went from six lanes of traffic to four. The two free lanes are now devoted to separated bike lanes and expanded sidewalks.

What creates choked freeways is not the number of cars, but the single use zoning for suburban sprawl that generates the need for cars and massive subsidies on public services and utilities stretched great distances to serve fewer people. EVs are not the answer, but can be a stepping stone or catalyst to the mass electrification of the domestic economy.

What are the answers? Sustainable urbanism, for one. Reshoring and decarbonizing manufacturing, development of knowledge-based economies over natural resource rip-'n-ship, and local food production are also very important.

Love him or hate him, Elon

Love him or hate him, Elon Musk will be happy to eat these bastards if they drag their feet too long.

Electric vehicles will only

Electric vehicles will only solve a small part of the pollution attributed to the transportation sector, the second largest producer of greenhouse gases after the oil and gas industry.
Notwithstanding the large amount of minerals involved in the production of electric vehicles, another major air and water pollutant as been identified: particle pollution from wear and tear of tires.
"Almost 2,000 times more particle pollution is produced by tyre wear than is pumped of the exhausts of modern cars, test have shown" (The Guardian, June 03, 2022: "Car tyres produce vastly more particle pollution than exhausts").
The tyre particules pollute air, water and soil and contain a wide range of toxic organic compounds, including known carcinogens....The tests also revealed that tyres produce more than a 1tn (trillion) ultrafine particules for each kilometre driven, meaning particles smaller than 23 nanometres. These are also emitted from exhausts (non present for EVs) and are of special concern to health, as their size means they can "enter organs via the bloodstream" (worth watching, The Nature of Things: "Something in the Air")
The average weight of all cars has been increasing. It is expected that electric vehicles, because they are heavier due to battery weight, will produce slightly higher tyre particles (especially if car manufacturers continue to produce big SUVs and pickup trucks to satisfy costumers demand).
Other recent research has suggested "tyre particles are a major source of the microplastics" polluting the oceans. A specific chemical used in tyres has been linked to salmon deaths in the US.
The next time you sit down at a cafe terrace located along a busy traffic street, consider that you are breathing trillions of tiny ultrafine particles that can considerably affect your health (The Guardian, September 10,2022: "Cancer breakthrough is a wake-up call on danger of air pollution").