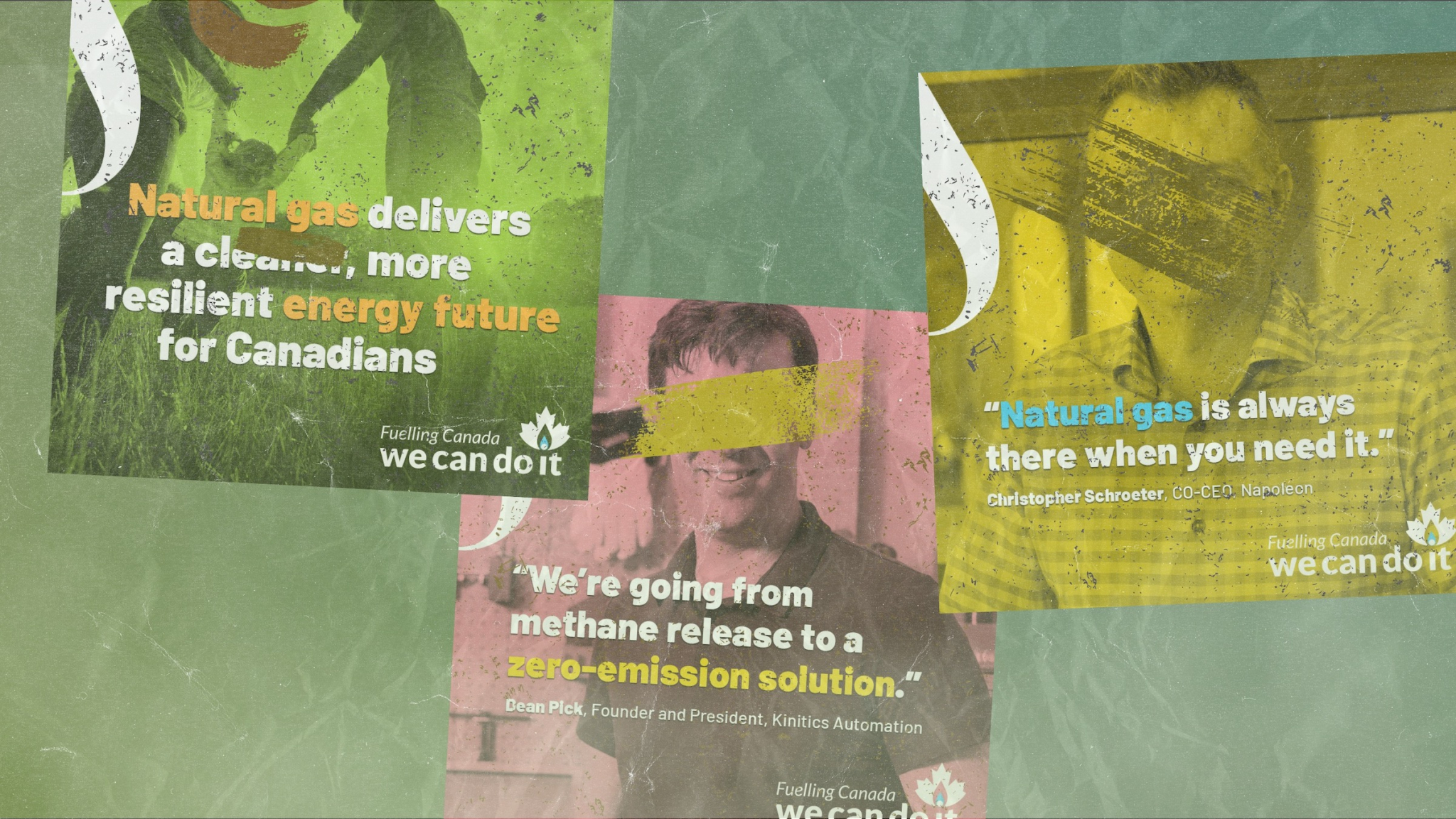 A powerful lobby group representing the Canadian natural gas industry is accused of greenwashing its products in a complaint filed with Competition Bureau Canada.

On Tuesday, a group of doctors, nurses and public health advocates organized by the Canadian Association of Physicians for the Environment (CAPE) filed the complaint with the federal regulator against the Canadian Gas Association (CGA), accusing the organization of misleading the public about so-called natural gas.

Natural gas, the health professionals say, should not be mistaken for a clean energy alternative simply because the industry has branded it “natural.” It’s mostly methane, a very potent greenhouse gas that when burned is 25 to 80 times more powerful at trapping heat in the atmosphere than carbon dioxide.

The gas association’s “Fuelling Canada” campaign is at the centre of the complaint. Launched in November, the campaign includes a website and social media channels advertising natural gas as “clean” and “affordable.” CGA describes itself as “the voice” of Canada’s natural gas industry and is a registered lobby group and not-for-profit corporation, representing companies like Enbridge, TC Energy, FortisBC, Énergir and about a dozen others.

This is despite the fact natural gas is a fossil fuel that significantly contributes to climate change. The complaint also notes natural gas was the “single most price-volatile commodity” over the past year, pouring cold water on industry projections that gas can remain cheap over the coming decades.

The complaint calls on the competition bureau to investigate the CGA’s claims that gas is “clean” and “affordable.” If the claims are found false and misleading, the complainants also request the industry retract the statements and pay a $10-million penalty to be put toward public climate education.

A powerful lobby group representing the Canadian natural gas industry is accused of greenwashing its products in a complaint filed with Competition Bureau Canada.

“We're using it as a case study to try to get the government to crack down on this type of behaviour, and to set a precedent so that other fossil fuel companies cannot get away with trying to greenwash their products,” Leah Temper, campaign director of the Fossil Fuel Ads Make Us Sick campaign with CAPE, told Canada’s National Observer.

The complaint says that by calling gas “clean” and “affordable,” the CGA’s advertisements “give the general impression that natural gas is good for the climate, good for the environment, good for human health, and affordable including when compared to other energy sources.” It adds these claims are made to promote the gas companies’ business models, which involve increasing the number of homes hooked to the gas network.

It calls these representations “false and misleading” because gas is responsible for planet-warming emissions at every stage of its life cycle — from extraction to end use. Moreover, the complaint says it isn’t “affordable” given that heat pumps are already cheaper to use in most parts of the country. Gas is also expected to become more expensive relative to other energy options as climate policies like carbon pricing and emissions standards steer economies to a lower-carbon future, and the fact gas is a volatile commodity subject to price shocks.

As of June 20, the CGA has spent about $30,000 on its Fuelling Canada advertisements on Facebook and Instagram, according to the complaint. It is not known how much has been spent on its Twitter advertisements or how much it paid to have an “advertorial” placed in the Globe and Mail in April designed to look like a news story titled, “Why natural gas is the smart choice for your new home.”

Temper called the Fuelling Canada campaign a “really extreme example of misinformation” that has been deployed to defend the industry from policies like bans on new gas hookups for new homes driven by concerns about climate change and the health impacts of burning gas indoors. Vancouver and Victoria both have policies in place requiring new construction to be emissions-free, while in Quebec, it will be illegal to replace any heating system with one powered by fossil fuels starting in 2024. Academic studies have also revealed gas cooking increases the risk of asthma in children.

“Their business model is being threatened, and they're putting [out] this advertising to buy social licence and to continue to expand gas infrastructure in Canada and to fight back against this push for regulation,” she said.

When asked what it means by “clean” and whether it accepts the scientific consensus that fossil fuels, including gas, must be phased out entirely over the coming years to stop global warming, the CGA chose not to say. Instead, it said the Fuelling Canada campaign is “an exciting educational platform that shows the remarkable contributions of natural gas to societal well-being in Canada.”

As documented in the complaint, burning fossil fuels like gas contributes substantially to global warming, threatens the economy and puts people’s health at risk. If not addressed, climate change is expected to cost Canada between $2.8 trillion and $5.5 trillion by the end of the century, according to the Institute for Sustainable Finance. Health Canada also expects increasing rates of physical and mental illness, as well as death, from climate change that will damage and disrupt health-care infrastructure and services.

The carbon intensity of gas is lower than oil or coal when it's burned, but when measured across its life — and taking into account how methane traps heat far more than carbon dioxide — its warming potential is comparable to other fossil fuels. The Atmospheric Fund plotted the “global warming potential” of gas over 20 years and 100 years.

“Fossil fuel companies and their industry associations have systematically misled the public about their climate commitments and green credentials to increase their profits, expand fossil fuel infrastructure and delay the shift to a net-zero economy,” Dr. Melissa Lem, a Vancouver-based physician and president-elect of CAPE, said in a statement. “Last year, my patients on the West Coast bore the brunt of this during the deadly heat dome, wildfire smoke and catastrophic flooding that killed hundreds of people.

“We cannot afford to put the health of Canadians and the planet at risk by allowing this to continue,” she added.

The complaint with Competition Bureau Canada comes five years after the advertising standards board in the Netherlands ruled Exxon and Shell had misled the public with similar claims.

Last week at a conference in Ottawa, the regulator’s commissioner of competition Matthew Boswell said climate change “may be the greatest market failure we have faced,” underscoring the importance of protecting consumer confidence.

“Consumers are making more and more green choices, and businesses are reacting to meet this demand. We see environmental claims everywhere, but they’re not all legit,” he said. “Greenwashing, the practice of making false or misleading eco-claims about a product or service, is on the rise. It’s our job to protect consumers from eco-fraud.”

Slight inaccuracy in the

Slight inaccuracy in the article: "It’s mostly methane, a very potent greenhouse gas that when burned is 25 to 80 times more powerful at trapping heat in the atmosphere than carbon dioxide."

Just to be clear, methane is 25-80 times more powerful when it's NOT burned--when it leaks into the atmosphere as is, which happens a lot in the natural gas industry. When it is burned it just creates CO2 like any other fossil fuel. Using natural gas as a fuel gets you a double whammy--CO2 when the stuff is burned as intended, methane in the atmosphere when it escapes from the sprawling fracking-and-pipeline systems that get it out of the earth and to your home. And of course every time someone credible measures how much methane is leaking, it turns out to be (surprise, surprise!) way way more than the gas companies estimated.

Government at all levels,

Government at all levels, including municipalities (Like Vancouver and Victoria have done) should be lobbied to outlaw natural gas in new construction.