‘Our country’s history is complicated – but you don’t make it better by ignoring it or glossing over it’: Murray Sinclair 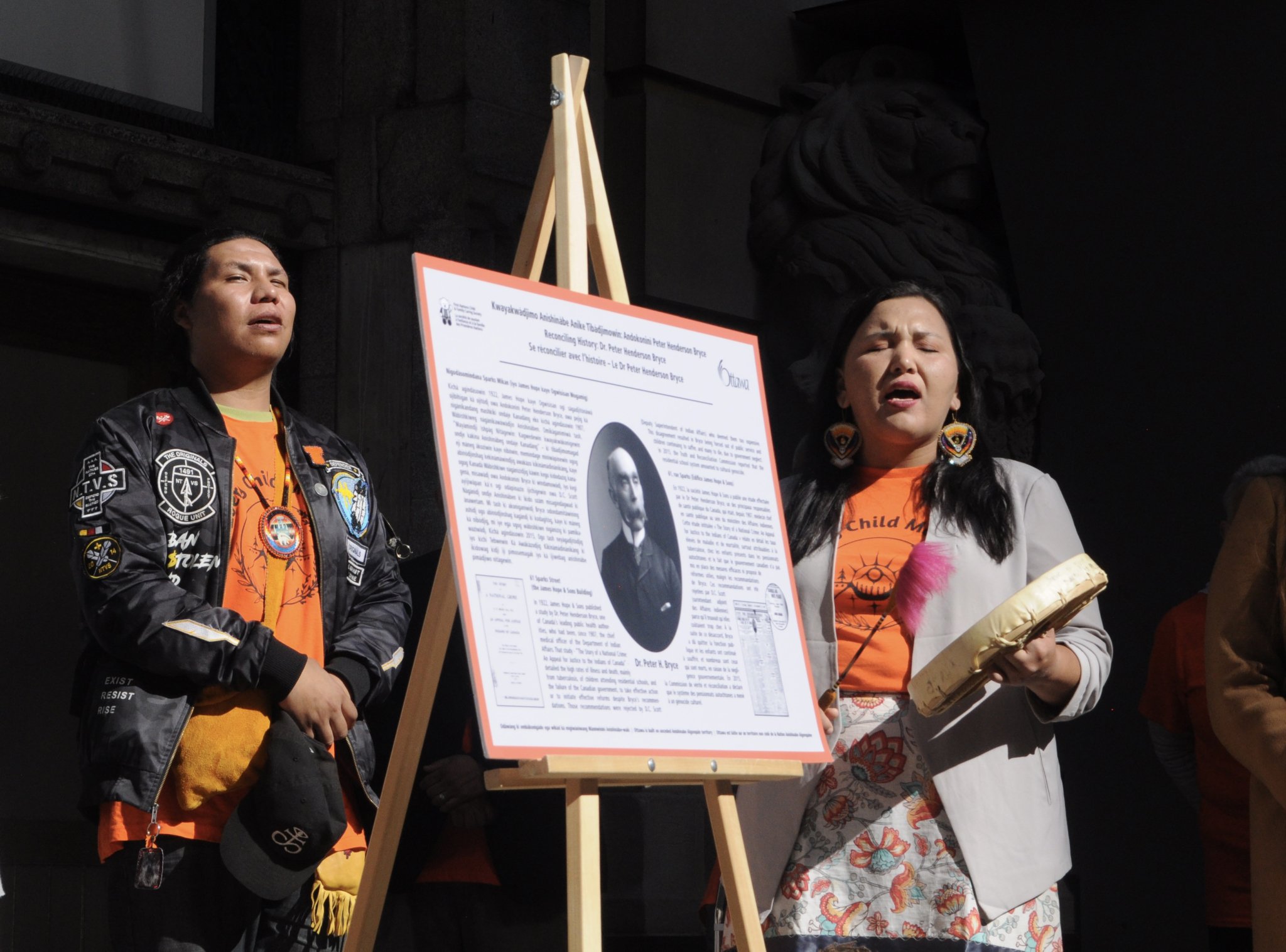 The second National Truth and Reconciliation Day in Ottawa was marked by drums, singing, smudge, and a wave of orange shirts, ribbon skirts, amautis, among other ancestral clothing.

It was a day that centered survivors and their stories, but also a day that demanded that reconciliation march forward.

Murray Sinclair, a former senator who was a commissioner for the Truth and Reconciliation Commission (TRC), noted in a speech that many governments were quick to give a holiday when the Queen died, but “unfortunately are still not embracing the meaning of today.”

To underscore his point, a crane working on the beginning stages of a condo development swiveled and operated behind the stage where he spoke.

“Yes, our country’s history is complicated and it’s not always easy to review,” he said. “But you don’t make it better by ignoring it or glossing over it.”

“You make it better by helping carry out the calls to action, by learning and by unlearning, and resolving to do better.”

A survivor shares his story

Laurie MacDonald, a survivor of Ermineskin Residential School and member of Enoch First Nation, said in both his speech and an interview that his own story is about resilience and reclaiming. MacDonald is also two-spirited, an orientation his grandmother seemed to intuit when he was very young.

One day when he was only five and the two of them were picking dandelions, she told him she saw a gift in him. She said it was up to them whether to choose a bow and join the hunt with the men, or walk with her sisters and aunties with a basket.

“We need daily reminders — everything that can keep us attuned and stay awake to this history and understanding how that history relates to today’s realities, that’s helpful," said Marie Wilson, TRC commissioner. #EveryChildMatters #TRC

“Whatever it is there’s nothing wrong with it,” she told him. “You choose for yourself, whatever your persuasion is, you look at it as a gift.”

“They think this is what you want,” he said, speaking to his abusers in residential schools. “Who wants to be abused? Because you're a man you think I’m attracted to you? We are picky too, you know.”

“In order for me to heal I have to look at it as a gift,” MacDonald said. “I look at that trauma, and why I look at it like a gift is because I can still take parts of it and it makes me a stronger person going forward.”

MacDonald could have dwelled on the trauma in his speech, but said he prefers to focus on the resilience, healing, and what the Creator has given them, including a beautiful sunny day.

That defiant resiliency in the face of the ongoing colonialism, is what MacDonald sees as characteristic of Indigenous peoples.

“Most Indigenous peoples, we’ve been handed a lot of shit through our lives, and they can throw a lot more, but at the end of the day, we’ll just dust it off like water off a duck,” he said.

MacDonald’s resiliency continues to this day. He lost his life partner soon after they retired, and just last year was hit by a car, causing him mobility issues. Still, he continues to laugh and celebrate his gifts as a two-spirited person. He also speaks, works, and advocates, as he has his entire life as a school teacher and social worker.

The report expanded to a work titled “The story of A National Crime: Being an Appeal for Justice to the Indians of Canada,” published in 1922.

The work culminated after Duncan Campbell Scott, known as the architect of the institutions, buried Bryce’s work and ignored the recommendations, citing too high a cost to implement them.

For Marie Wilson, one of the TRC commissioners, Bryce is an inspirational man, but no more inspirational than “all of these survivors.”

He is the example non-Indigenous Canadians should live up to when responding to Reconciliation and speaking up against the horrors of residential schools and the ongoing history of colonialism.

For Cindy Blackstock, a Gitxsan activist for child welfare and executive director of the First Nations Child and Family Caring Society of Canada, Bryce is an “exemplar of all the resistors.” Her own story is similar to his: Blackstock fought for years to bring justice for Indigenous children in the child welfare system.

She says the impact of Bryce’s work should serve as an ominous warning about the news cycle and how easy it is to forget.

When his report was released publicly, the newspapers were full of headlines about the atrocities, she said in an interview. “But when the headlines died so did the children.”

For Wilson, daily reminders are essential for the Truth and Reconciliation process. It’s the only way to prevent people from forgetting, she said.

“We obviously need available daily reminders — everything that can keep us attuned and stay awake to this history and understanding how that history relates to today’s realities, and to the future as a country, beginning today, that’s helpful.”

How Gerry Oldman forgave and fought his way to freedom

"Everyday" is a qualifier.

"Everyday" is a qualifier. Who is writing your headlines?

For Wilson, daily reminders are essential for the Truth and Reconciliation process. It’s the only way to prevent people from forgetting, she said.

So true and insightful as this atrocity must never be forgotten, although extremely uncomfortable to those who choose to ignore and dismiss a history of abuse committed in Gods name they really need to hear this..... you shall know the truth, and the truth shall make you free. John 6:45