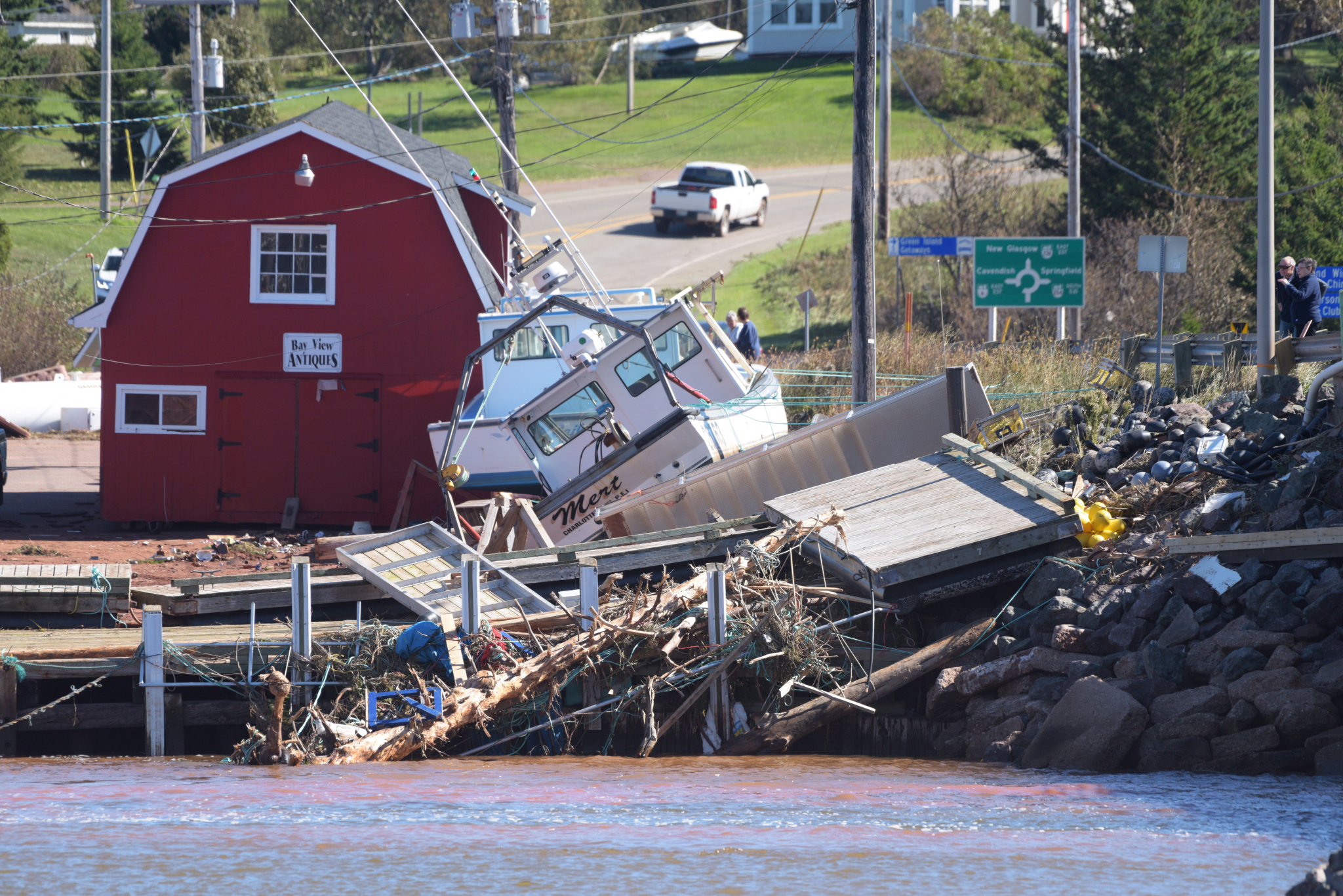 Damage to the wharf in Stanley Bridge, P.E.I., on Sept. 25, 2022. Photo by The Canadian Press/Brian McInnis
Previous story

My family’s WhatsApp thread dinged. Mom. “Behind the screen porch. Omigod, the cost of the cleanup!! Like the dunes … gone.”

It was just a photo of a tree down at the family cottage on Prince Edward Island. But it’s striking how the micro can sometimes light up the big picture. My imagination cut instantly to a Don’t Look Up-style montage of the millions upon millions of far more dramatic messages that must have been flashing through the internet over the past couple of weeks.

A couple of weeks on planet Earth when hurricanes plunged 11 million people into darkness in Cuba, permanently redrew the coastline of P.E.I., and turned Florida roads into rivers. All while the floodwaters that upended the lives of tens of millions in Pakistan, and drowned their future crops, have yet to recede.

Which raises an existential question: who is going to pay the spiralling costs of climate-driven disasters and, just as crucially, the costs of rebuilding a more resilient society? Or, more to the point, who is currently paying their fair share and who are the deadbeats?

Right now in Canada, the costs of climate-turbocharged disasters fall disproportionately at the local level. Ottawa and the provinces kick in with one-time emergency injections that get the big headlines, while on the ground, it’s a long, grinding story of individuals struggling with insurance companies to get their homes and businesses rebuilt. Moreover, 60 per cent of core public infrastructure is owned and maintained by municipalities in Canada — so our system places a disproportionate burden on the very level of government that has seen its fiscal capacity shredded by decades of austerity even as a pile of social costs has been dumped on its doorstep. And that was before the disarray, burnout, staff shortages and chaos of the pandemic.

In short, the burden is not fairly shared. As for the real costs of climate adaptation and resilience, they’re perennially understated. The hard truth is that our entire industrial society was built for a climate that no longer exists. And the cost of reinventing everything — how we work, get around, grow our food, heat and cool our homes, manage our water and take care of each other — is going to be, you know, ginormous.

That’s why I’ve been working with others in B.C. to get local governments on board to sue Big Oil. It’s time the industry that bears an immense burden of responsibility for the climate emergency is forced to pay its fair share.

This is no abstraction. In the last couple of years, where I live on the Sunshine Coast (a stunningly fortunate coastal community by global standards) we’ve had roads washed out, prolonged smoke seasons, a severe water crisis driven by drought, and a local community hall that may have to be relocated due to sea-level rise.

Meanwhile, we’re watching Big Oil’s profits spiralling skyward in contrails of cash: in Canada, Big Oil is projected to pour out $147 billion of “free cash flow” in 2022. Globally, Exxon, Chevron, Shell, BP and Total made $51 billion in profits just in the last quarter. And historically, recent research revealed that global oil and gas industry profits total $51 trillion since 1970. That’s right, $3 billion a day. Day after day, week after week, year after year; $3 billion a day for 50 years in pure profit. These days, those money-gushers go mostly to share buybacks and dividends — buying yachts, mansions and ranches that their owners no doubt believe will protect them from the worst impacts of the disasters they helped fuel.

Opinion: It’s time the oil industry that bears an immense burden of responsibility for the climate emergency is forced to pay its fair share. @avilewis writes for @NatObserver.

Meanwhile, like Big Tobacco, Big Oil has known for decades it was selling a product that would cause untold harm. And just like Big Tobacco, it has made a conscious and sustained choice to deny, dissemble and delay. Now that outright climate denial is finally becoming unfashionable, greenwashing is the order of the day. In this effort, Big Oil is joined at the pipeline to Big Finance.

The banking giants that signed Mark Carney’s Glasgow Financial Alliance for Net Zero have poured almost $5 trillion into fossil fuel projects since the Paris Accords. Similarly, Canadian oil and gas corporations boast about their “Net-zero by 2050” pledges while doing pretty much zero to fulfil them. And according to a huge cache of documents discovered recently by a U.S. congressional committee, Big Oil execs are quite aware that they are “gaslighting” us with relentless marketing of their supposed climate concern. Shell, one of many committed to net-zero by 2050, clarified for its employees that it has “no immediate plans to move to a net-zero emissions portfolio.”

So the case for the Sue Big Oil campaign, launched by the venerable West Coast Environmental Law, is compelling: they knew, they denied they knew, they profited and continue to profit while they run out the clock. They need to pay their fair share now.

I think this campaign meets the measure of this historic moment for a number of reasons. First, it cleverly leverages a particularity of B.C. law — class action plaintiffs here don’t have to pay the other side’s legal fees if they lose. So there’s no financial risk for cash-strapped local governments. Second, it calls people to action at the municipal level, the most intimate and accessible site of organizing, while evoking a big-picture narrative of the forces at play in this global battle. And finally, it takes direct aim at the obscenely profitable corporations that are pouring filthy fuel on a planet in flames.

Last year, an extraordinary group of 23 academics published a groundbreaking interdisciplinary attempt to answer one of the most important questions facing humanity: after three decades of international climate efforts, “Why Haven’t We Bent the Global Emissions Curve?” The answer boils down to power. The power of the status quo, business as usual, vested interests. The power of profit-over-all capitalist logic. The power of the fossil fuel industry.

That power, the power of Big Oil, is the boulder in our collective path. We need to chip away at that obstacle — at the social licence that allows fossil fuel giants and their enablers in the political class to continue to expand right when it’s so clear to so many that what we actually need is a managed decline of oil and gas, one that takes care of workers, not corporations.

We also have bills to pay: for rebuilding homes, roads and bridges, for new clean transit lines, for energy retrofits, and much more. If the bill is passed on to overstretched and overstressed individuals and municipalities, it will only deepen our divides. But forcing the polluters to pay? That’s a potentially unifying call.

Of course, this is not the One Big Campaign, the single silver bullet of climate action. And there are many legitimate questions to resolve on the long road to a class action victory. But climate litigation is surging globally, and for good reason. Big Oil’s belligerent belief that it can greenwash its way to further deadly decades of growth means we have no choice but to go directly at climate criminals and hit them where they actually feel it: in the profit column.

Suing Big Oil is a natural escalation that mirrors the escalation of the climate crisis itself. Pretty soon, if we play our cards right, Big Oil could find itself chanting its own version of the wry old activist aphorism: First they protest you. Then they expose you. Then they sue you. Then you lose.

Big Oil ? For certain, but

Big Oil ? For certain, but lets not any of the other carbon emitters off of that list, Big Coal, Big Plastics, Big Gas all need to be operated in such a fashion that these primaries plus all secondary capital investors are forced to return all cash flow to climate change mitigation, with the only possible exception being capital reinvested in zero carbon energy applications.

A global move to enforce this practice is the only way that humanity will see the finance of green power. ESG PR exercises are not a mitigation practice.

Thank you for this. I too

Thank you for this. I too have been feeling like we're living in the movie Don't Look Up, especially listening to the regressive rhetoric from the Conservative Party of Canada. But the Liberals haven't done much either, and they continue to support fossil fuel development.
One sentence in this opinion piece especially stood out for me:
"The hard truth is that our entire industrial society was built for a climate that no longer exists. "
It seems like every time a disaster hits, we humans just want to get back to "normal." but we need to face the sobering fact that there is no more normal/stable climate such as the one humans have enjoyed for the last 10,000 years.
After being evacuated from the wildfire near 100 Mile House, BC, and seeing how stretched resources were, it became clear to me that governments could and will go broke dealing with climate disasters. No one talks about this.
Yes, it's past time to sue Big Oil. I have signed the declaration and will vote for candidates that advocate climate action in the municipal election.

Let’s not let Big Government off the lawsuit either. They’re the idiots who collected royalties from all forms of mining (Oil, NatGas, coal, iron, nickel, copper, cobalt, etc) without saving anything to clean these mines afterward!

Mining cleanup is a far more serious problem than somehow stopping burning FossilFuels. (Max: how many of your readers have stopped driving, vacationing OR have installed Solar? So few of us will do anything, that we should #BePrepared for coming ClimateChange; we are unwilling to do anything to change our luxurious lifestyle.)

If we can’t find a way to achieve NetZeroMiningPollution, our First Nations won’t let us mine their Canadian Shield for the many minerals needed to electrify Canada and the world. After all, would You let ‘foreigners’ rape Mother Earth and pollute your rivers and backyard as we’ve done for a century ?!

Sorry, my question was

Sorry, my question was directed to Avi Lewis, not Max Fawcett.