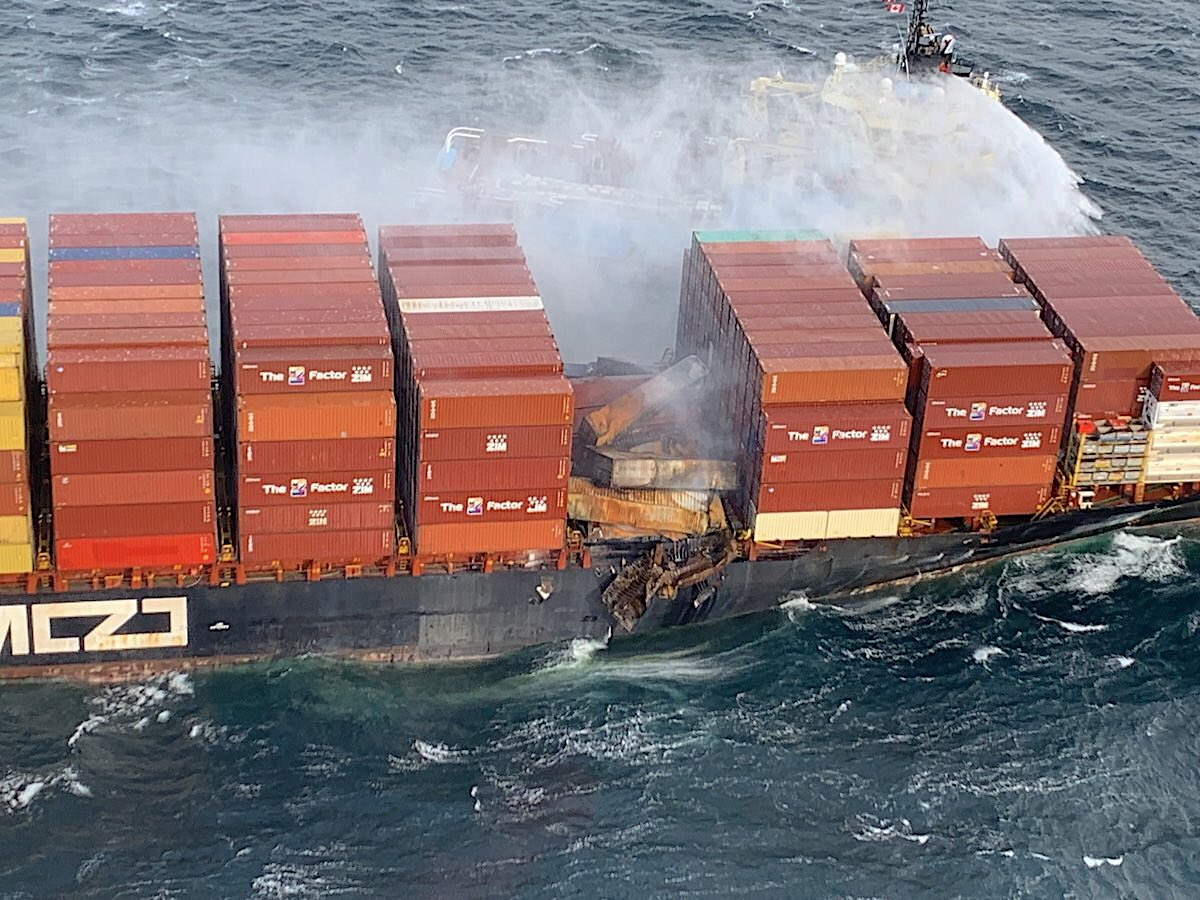 A parliamentary committee wants Ottawa to limit the environmental damage and plug response gaps for marine cargo spills after a container ship lost more than 100 sea cans and was immobilized by a stubborn fire on the B.C. coast last year.

The ZIM Kingston, owned by Greece-based Danaos Shipping Company Ltd., burned for a week after containers with combustible chemicals caught fire in the wake of stormy weather. But first a mass of containers, two carrying hazardous materials, washed overboard on the southern coast of Vancouver Island on Oct. 21.

Debris from the containers, most of which have never been retrieved, is still washing up on West Coast shores, with reports last month suggesting it has reached as far north as Alaska.

Only four of the shipping containers have been found and retrieved from the shore, with the rest presumably littering the seabed.

It was shocking there was no extended effort to find or retrieve most of the missing containers, said Barron, who requested the standing committee study the issue.

“If one of those containers had gold bars in them, we’d find a way to get it out of the ocean,” the MP for Nanaimo-Ladysmith said.

“Instead, they are just left there … and they will inevitably open, and the debris will wash up on our shores for years to come.”

The committee investigation, launched in January, provided 29 recommendations to the federal government to improve the response to marine cargo spills.

Although no fisheries were closed as a result of the cargo losses, the report stated, two shipping containers with a combined 42,000 kilograms of hazardous chemicals — potassium amyl xanthate and thiourea dioxide, used in mining and the textile sectors respectively — were lost at sea.

The chemicals posed limited environmental risks because they were expected to dilute and be distributed widely in the ocean, according to Environment and Climate Change Canada and the Department of Fisheries and Oceans.

But given there is no way to track containers, it’s difficult to monitor or mitigate any potential environmental concerns that might arise from their loss, said Alys Hoyland, youth co-ordinator with the Pacific Rim chapter of Surfrider Foundation Canada.

And plastics — particularly polystyrene foam typically used in molded forms to protect goods or to make packing peanuts — will break down and persist for decades, if not centuries, to be widely distributed in the ocean and on shores, the committee heard.

Polystyrene and nurdles from marine debris are much more insidious and have a longer-term impact than even oil, Stafford Reid, environmental emergency planner and analyst, told the committee.

Given concerns were repeatedly raised about polystyrene foam, the committee recommended Canada spearhead an international effort to ban the product in marine transport packaging, and better monitor and research the particular plastic’s impact on the marine environment, Barron said.

Shipping containers should also be outfitted with tracking devices to make it easier to locate them if they are lost, said committee member Liberal MP Ken Hardie.

“Something that allows us to at least find out where they are, and to determine whether or not they could be salvaged in some cases, or if left alone, that they're going to be fine,” Hardie said.

There were also gaps in the response and communications in the ZIM Kingston incident, Hardie said.

More proactive infrastructure needs to be in place, such as having pre-approved salvage and cleanup operators from B.C., First Nations and coastal communities that have the expertise and local knowledge of the region, he added.

Canada isn’t prepared for a co-ordinated spill response for hazardous substances other than oil, particularly in terms of towing or firefighting, salvage capabilities or appropriate onshore facilities, experts told the committee.

There’s also the need to improve transparency around what is washed overboard and the financial accountability of shipping companies involved in cargo spills, Barron said.

The committee heard coastal and Indigenous communities and cleanup groups — on the front lines of a spill and the first to begin cleaning up debris — aren’t integrated in a spill response, nor do they get a specific understanding of what they’d find washing up on their shores.

Not having specific cargo manifests available also makes it difficult to ensure the polluter continues to pay when marine debris washes ashore years after an incident, Barron noted.

A shipping company is also only liable for cleanups for a maximum of six years after the incident and financial responsibilities are limited, the committee heard.

As a result, the federal government should examine other mechanisms to ensure money is available immediately and in the long term for environmental damage from cargo spills, the committee recommended.

Shipping volumes are on the rise along with extreme weather incidents and it's imperative that the federal government develop a clear plan to prevent cargo spills, Barron said.

Overboard cargo containers spiked in 2020/21 with an annual average loss of more than 3,000 containers due to severe weather, according to the World Shipping Council.

“Coastal communities are the ones feeling the brunt of the debris that continues to wash up,” Barron said.

“And if we’re just leaving containers in the sea, we need to have a cleanup plan that looks longer term.”

This article was updated to correct the spelling of the last name of Alys Hoyland, youth co-ordinator with the Pacific Rim chapter of Surfrider Foundation Canada.