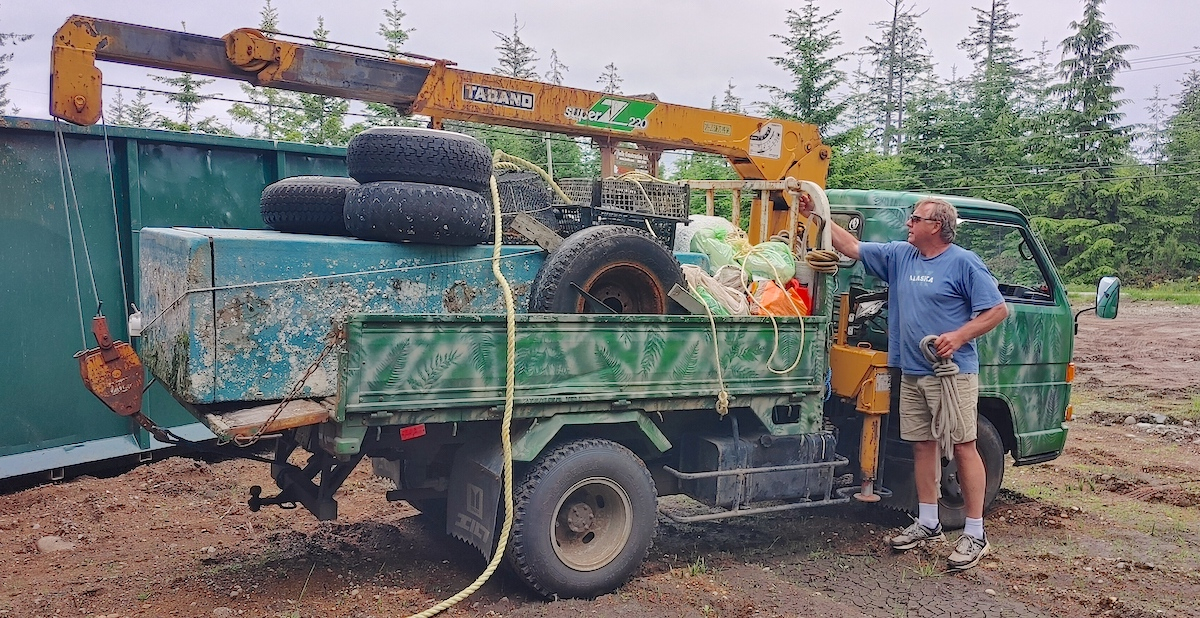 The site collects materials from shoreline cleanup efforts and legacy equipment from commercial fishing and the aquaculture industry, providing essential infrastructure to divert plastics from the landfill and reduce oceanic pollution, she said.

“There are lots of people who have been waiting specifically for the depot to open so they can bring stuff in so it won’t end up in the landfill,” she said.

The site will collect lost or discarded fishing and aquaculture gear (such as netting, ropes and shellfish trays) and marine debris like plastic buoys and chunks of polystyrene (Styrofoam), typically used to float docks and platforms.

The Cumberland depot is the third of its kind on the B.C. coast, said Chloé Dubois, executive director of Ocean Legacy Foundation, with two others in Powell River on the Sunshine Coast and Ucluelet on the West Coast of Vancouver Island.

Chloé is the Executive Director and Co-Founder of The Ocean Legacy Foundation, a Canadian non-profit organization founded in 2014 with the goal to end plastic waste in our oceans. #WeDontStophttps://t.co/sNOkdxTYSp pic.twitter.com/vyUI2ryVVg

The depots are located to handle the hot spots of plastic pollution on the West Coast, she said, adding two more collection sites are in the works.

The debris collected at the depots is sent to Ocean Legacy’s processing centre in Richmond, where it will be further sorted, cleaned and recycled, Dubois said.

Marine debris recycling depots are being set up in coastal communities to feed a circular plastics economy in B.C. — and beyond. @OceanLegacy_ca @comoxvalleyrd #OceanPlastics #PlasticPollution #PlasticFreeJuly

“Last year, we diverted about 500 tonnes from the landfill,” she said, adding Ocean Legacy is also collecting marine debris gathered in Alaska and Washington state because the infrastructure to deal with ocean plastics is in the early stages.

“We’re one of the largest, industrial-scale projects collecting these certain types of materials,” she said.

The first and best way to divert ocean plastics is to reuse the items, Dubois said.

Industry equipment that’s in good condition and reusable, like hard plastic shellfish trays, is offered to industry partners such as the BC Shellfish Growers Association.

“Our waste hierarchy prioritizes reuse because that takes up the least amount of carbon,” she said.

“Then it goes to processing and recycling.”

Once the marine debris arrives at the Lower Mainland facility, the foundation further sorts it and offers items it doesn’t process, such as beverage containers, to recycling partners.

But Ocean Legacy is at the forefront of processing some ocean plastics into pellets that can then be transformed into durable, useful products such as kayaks or kayak paddles, Dubois said.

“We’ve developed a lot of our own technologies,” she said, noting Ocean Legacy is currently processing polypropylene and high- and low-density polyethylene and will expand into processing nylon next year.

“We’ve been focusing on the polypropylene rope and netting because there were no local options for processing them,” Dubois said.

“We’re trying to identify materials that are hard to recycle and to develop solutions for those materials.”

The foundation also works to educate people on the ocean plastics problem, she said.

“The core of what we do is really based on … our cleanups and education and embodying the principles of circularity that we think are going to be key for a sustainable future,” Dubois said.

Some 11 million tonnes of plastic waste flow annually into oceans — and that’s expected to triple by 2040 if current production levels are left unchecked.

But the recycling of plastics is actually difficult and 87 per cent of Canada’s plastics end up in landfills.

The federal government has invested heavily in dealing with ocean plastic and ghost gear, Dubois said, noting Ocean Legacy gets a significant amount of federal funding.

But policy changes such as mandating minimum recycled content for plastics manufacturing help develop a circular economy and slow the pace of virgin plastic production, she said.

“It would give recyclers and people wanting to get into the industry incentive to do so — to actually make those capital investments for the infrastructure that is so needed.”

Widening and strengthening extended producer responsibility standards — where a manufacturer is responsible for reducing the environmental impact of its product across its entire lifecycle — is another means to deter single-use plastics, Dubois said, citing B.C.’s beverage container deposit-refund system as a fairly successful example.

Such steps and actions modelled by the foundation would help minimize waste and set a precedent for the way plastic products are designed and consumed in the future, Dubois said.

“I like to say we're building pragmatic tools to support the plastic circular economy within Canada and beyond.”

Most ocean plastics come from

Most ocean plastics come from four Asian countries. China, most of those.

Why don't we pull together a treaty of countries that vow to reduce all trade links to nations that do this, until they reform?

About half the world's pollution problems arise from our outsourcing our worst behaviour to a few Asian countries, and there's just little point in scolding our own remaining pollutions until that larger issue is at least addressed with some effort. There's just zero; and that "zero" includes this article, which does not contain the words "Asia" or "China".

This project is about plastic

This project is about plastic that originates here and would otherwise go in our landfills. China has nothing directly to do with it.