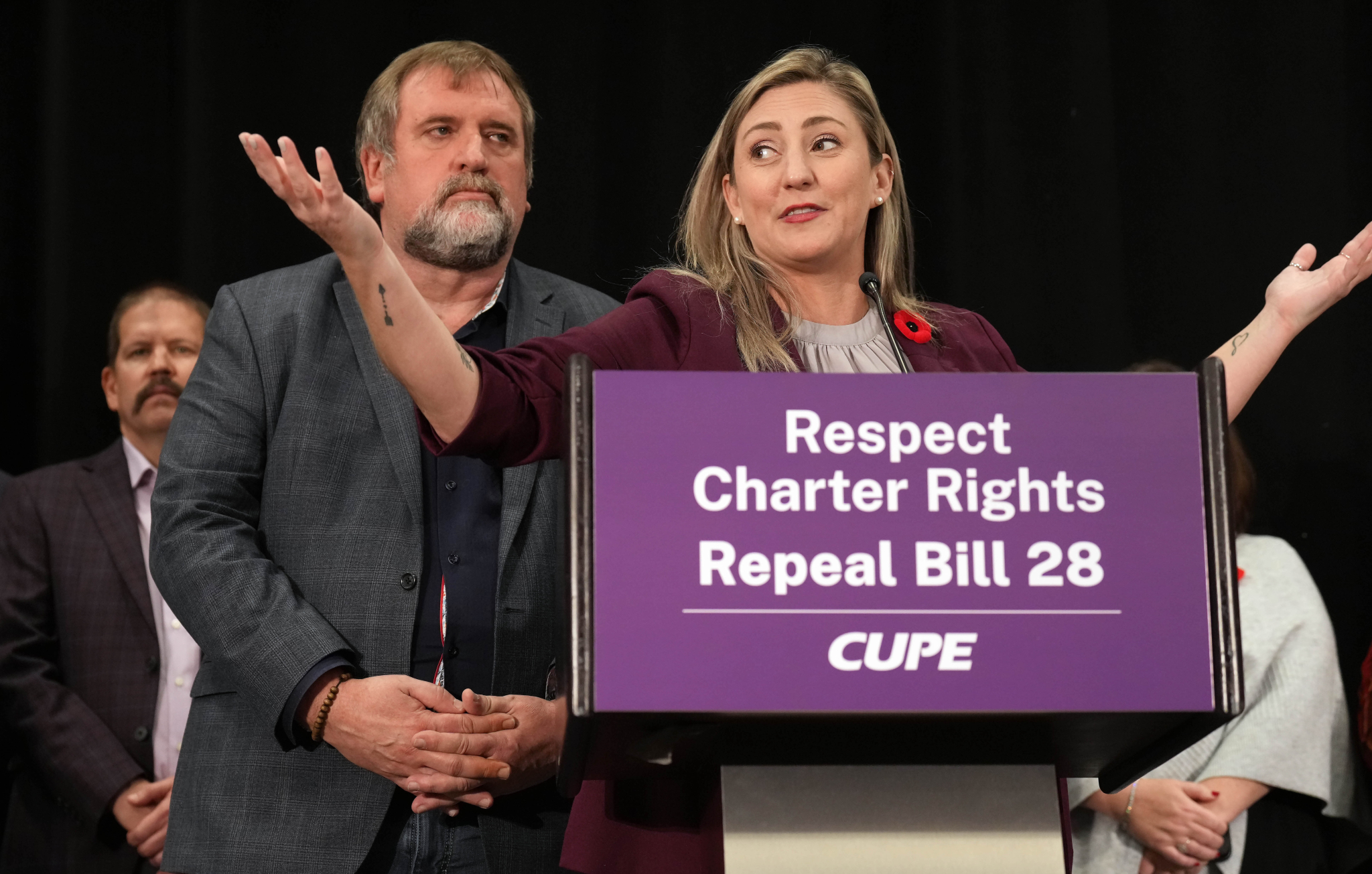 Laura Walton, president of CUPE-OSBCU, discusses the education workers' walkout as CUPE president Mark Hancock and other union officials look on at a news conference in Toronto on Monday, Nov. 7, 2022. THE CANADIAN PRESS/Nathan Denette
Previous story

It could have all been a bad dream, one labour academic said, of the week and a half when Ontario lurched into a constitutional crisis over how much to give its lowest-paid school workers.

“A bad dream in which the system is kinda torn apart, it's not trusted,” said Rafael Gomez, an associate professor of employment relations at the University of Toronto, about the sharp escalation in a school labour dispute allowed to fester since the summer.

“And then you wake up from that fevered dream and you go back to the institutions that help resolve conflict,” Gomez added.

In the space of nine days, Ontario’s Progressive Conservative government drew up, imposed and promised to withdraw a law that invoked the Charter of Rights and Freedoms’ notwithstanding clause to block any opposition to its enforced four-year pay offer for Canadian Union of Public Employees (CUPE) members. This chain of events happened after some 55,000 educational assistants, early childhood educators, school librarians and janitorial staff issued a strike notice on Oct. 30.

The parties are now back at the bargaining table, but only after a two-day mass protest, an outpouring of solidarity with CUPE workers and the threat of a general strike.

Gomez and other observers say the government will likely have to sweeten its offer significantly if it wants to cut a deal and put this episode behind it in the next week or so.

There is good reason for the government to settle quickly. The Ontario Labour Relations Board (OLRB) heard arguments from both sides on the legality of the walkout. However, labour observers say the board’s decision will likely never see the light of day because it will be rendered moot when Bill 28 is repealed.

“I’m not privy to the private backroom dealing, but it is not uncommon for parties to agree amongst themselves that there is no benefit to releasing a decision and that, in fact, doing so could complicate settlement discussions,” explained David Doorey, associate professor of labour and employment law at York University and author of The Law of Work and a related blog.

Larry Savage, a professor of labour studies at Brock University, said that “forcing [Premier Doug] Ford to come down (by withdrawing the law) gives CUPE a spring in its step, which should carry through to negotiations.”

Savage added it was “spectacular that the premier, through that one legislative action, was able to consolidate opposition so fiercely and so quickly” from an otherwise fairly divided Ontario labour movement not known for militancy.

Education workers, union could win more at the bargaining table since forcing Doug Ford to withdraw, observers say, but it's an open question whether the wage hike dynamic spreads to other public-sector negotiations. #onted #onpoli

Gomez described it as a silly move, noting the government could have avoided the notwithstanding clause altogether and just banned a CUPE strike, sending the toughest aspects of the dispute over to binding arbitration.

“But when you close off avenues for dialogue, and for redressing a concern, you invite this more dramatic action of public protest that's disruptive,” Gomez said. “And if you've prevented people from being able to bargain or negotiate, they will hit the streets.”

During the two days the school staff represented by CUPE’s Ontario School Board Council of Unions (OSBCU) defied the anti-strike law and withdrew their labour, they set themselves up for success while keeping parents and the public largely on their side, observers and polling suggests. Other labour groups, both public and private, joined in, including some who backed Ford’s re-election this past summer.

“Ford definitely shot himself in the foot by invoking the notwithstanding clause,” Savage said. “He overplayed his hand by proactively suspending Charter rights and freedoms, and it backfired spectacularly on him.”

The only public polling so far released on the issue, by Abacus Data, showed broad support for OSBCU and the wider protest. That indicates the union has strengthened its hand in the fight for a decent pay raise, and might also be able to win so-called “common good” concessions that force the government to invest more in schools and students, with conditions such as a minimum number of hours of support or for more caretaker hours per school, Savage said.

The broader question now is whether any eventual success in a deal will have a spillover effect when contracts for other public-sector workers are negotiated. Many teachers, nurses and others wage-restrained contracts enforced by a 2019 law are nearing expiry amid high inflation.

“It will be a very interesting next few weeks to see if people rally together and this militancy spreads or will the government be able to contain it,” Savage said.

Gomez says the government has likely calculated that its retreat gives officials more time to structure a deal that doesn’t come across as giving up or caving in. It will probably focus on giving the lowest-paid workers more, he said, while signalling that expectations should be curtailed elsewhere.

Education Minister Stephen Lecce has for weeks been warning that CUPE’s pay proposals would cost $19 billion if applied across the education sector. But Gomez said that no “me-too” clause applies here that would make sense of his quoted price tag.

School’s back, as Ford backtracks on anti-strike law

‘Bring it on’: Ontario education workers set to strike Friday in defiance of back-to-work law