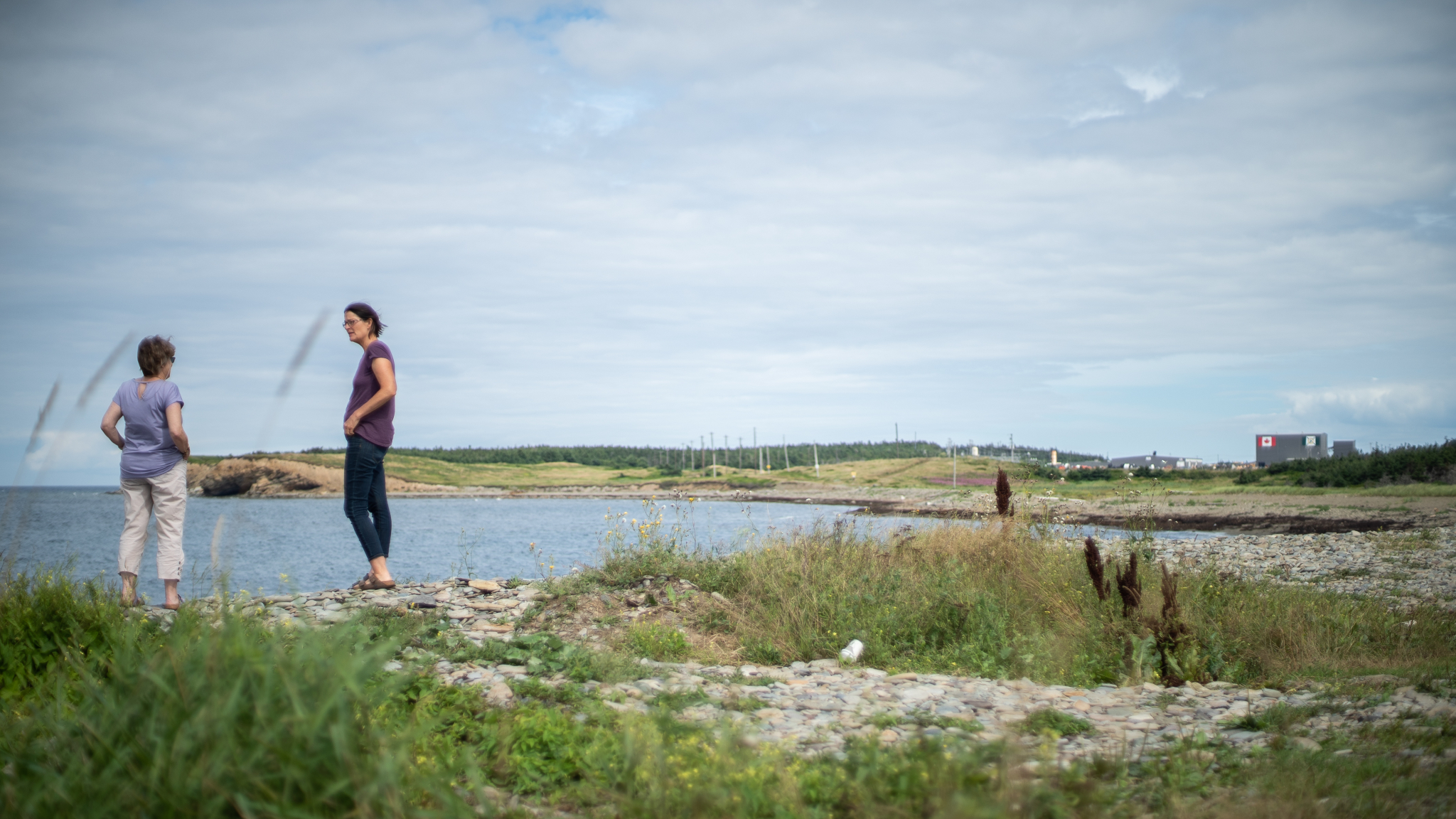 Cow Bay Coalition members Eleanor Peach Gallant and Catherine Fergusson with the Donkin mine in the distance. Photo by Cloe Logan
Previous story
Next story

Canada’s only underground coal mine is now set to operate for at least seven more years.

On Friday, the Donkin coal mine in Cape Breton got the industrial green light to continue running until 2029 from the provincial government’s Environment and Climate Change department.

The mine reopened in September following a closure between 2017 and 2020 when more than a dozen roof cave-ins and other safety warnings prompted a series of on-and-off stop-work orders from the province to the company, Kameron Coal. Now, as the price of metallurgical coal (used for steelmaking) has spiked, the mine is back in action after the Department of Labour, Skills and Immigration approved its reopening plan.

The government also issued new terms the mine must adhere to under the approval, including the installation of a degasification system (aids in methane ventilation) and subsequent reporting and responding to complaints from community members within five days. The mine is also "expected to contribute to meeting Nova Scotia’s legislated greenhouse gas emissions targets,” according to a release from the province.

To Tynette Deveaux of the Sierra Club’s Beyond Coal Atlantic campaign, it's wrong for the government to ignore the harmful effects of allowing a coal mine to keep operating.

After a full year, the mine is expected to produce enough coal to spew about eight million tonnes of carbon dioxide into the atmosphere when it is burned. The three million tonnes of coal the mine will produce a year will create as many greenhouse gas emissions as the yearly energy use of over a million homes — more than the entire population of Nova Scotia.

According to documents obtained by Canada’s National Observer, MacLellan now works for the company, which he vocally supported during his time in government. Referring to coal from the Donkin mine, he told The Canadian Press in 2017 “we're going to produce it for as long as we can."

The town of Glace Bay is a 20-minute drive from the mine, in the neighbouring district of Cape Breton East. In mid-November, MacLellan announced he was leaving his position as deputy minister of Intergovernmental Affairs. He’d been involved in high-level politics since 2010 and served as MLA for Glace Bay from 2010 to 2021. He was also the energy minister between 2017 and 2018.

He also chaired the Halifax Regional Municipality Housing Task Force. A government press release said he “will remain chair of the task force until a new chair is appointed in the near future” and noted his last day was Nov. 10.

Today, the province granted the Donkin Mine industrial approval until 2029. And, according to documents, former Glace Bay MLA Geoff MacLellan has started working for Kameron Coal since leaving office in November. Story here:

Information that MacLellan now works for the mine surfaced when he was cc’d at the bottom of correspondence from Environment and Climate Change Nova Scotia about a study into noise complaints from nearby residents, who can hear the mine’s ventilation fan from kilometres away.

The letter is addressed to the Cow Bay Environmental Coalition, which has expressed concerns to the government around the noise, emissions and other environmental issues with the mine. MacLellan is cc’d at the bottom. Beside his name, “Kameron Coal Management Limited” and a company email address.

Canada’s National Observer reached out to MacLellan through his email, as well as Morien Resources, which has royalties in the mine and made the reopening announcement for Kameron Coal. They did not respond in time for publication.

Environment and Climate Change Nova Scotia did not respond to questions about his employment.

“The Department of Environment and Climate can’t speak to the employment information of private companies. We are not working with Geoff MacLellan,” the department said in a statement.

MacLellan going from public office to working for Kameron Coal raises alarm bells for Deveaux, who said workers in Cape Breton need to see more support from government for the creation of clean, sustainable jobs for the area, which sees high unemployment rates.

“I would say to the people of Nova Scotia, how are we going to respond to that? Are we going to shrug and say, ‘Well that's just how things are done here.’ And accept that government is going to have a coal mine's back before it has a community's back?” said Deveaux.

“Or are we gonna call it out and say, ‘You shouldn't be able to jump from a political office to, weeks later, being employed by a company at the centre of controversy.’”

Very good article and it's

Very good article and it's important to expose coal mines are getting more support than communities. There are wind and solar options that could be developed on Cape Breton.