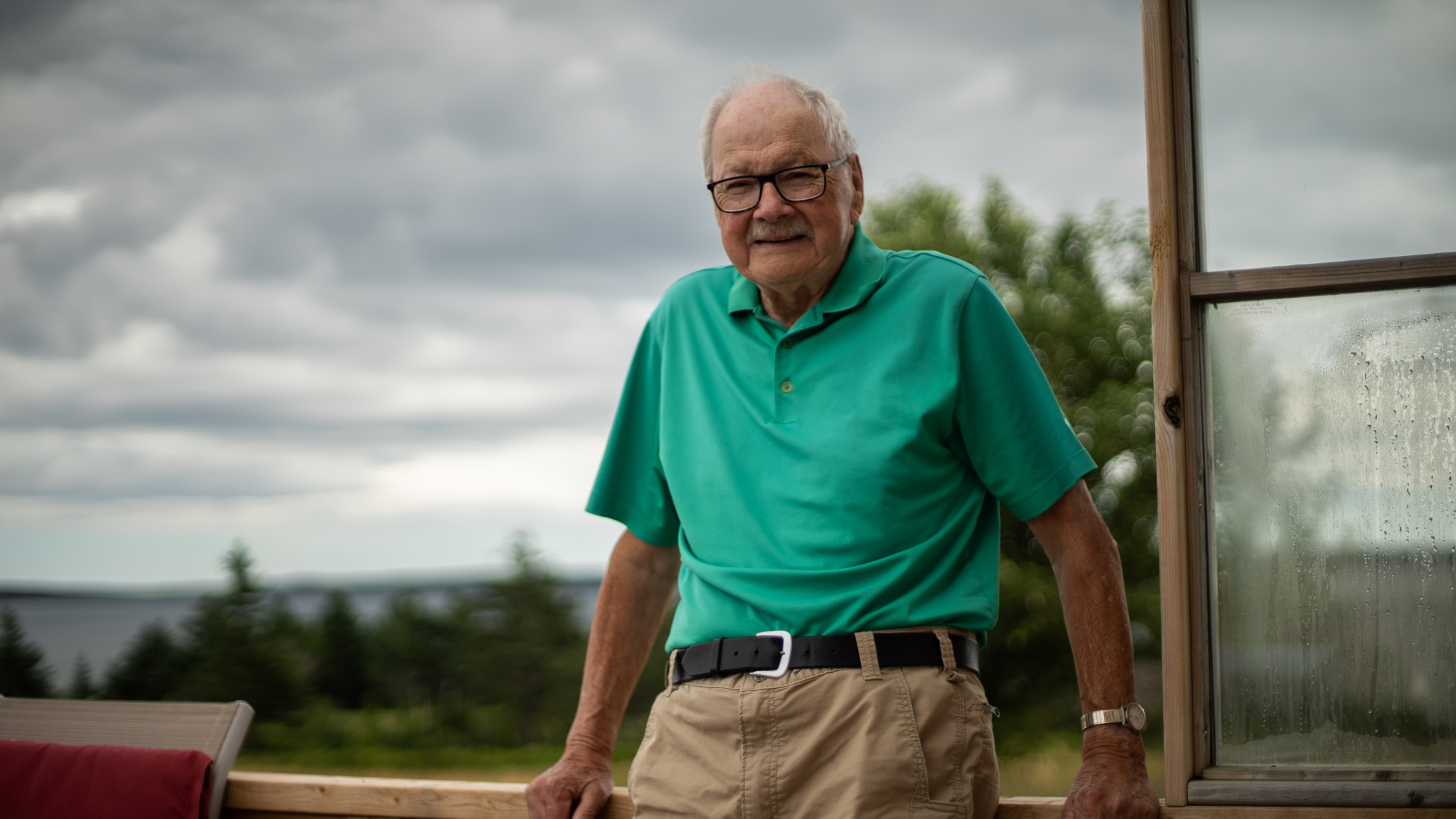 Local resident LeRoy Peach at his cousin's house across from the Donkin mine in Cape Breton. Photo by Cloe Logan
Previous story

That’s Elizabeth Marshall’s reaction to the reopening of the only operational underground coal mine in Canada: the Donkin mine in Cape Breton. Marshall, a Mi’kmaq Grandmother, is a member of the nearby Eskasoni First Nation and part of the Mi’kmaq Warrior Society.

“How can they do that to the people again? Putting them underground to extract something that does not belong to be brought up above ground,” she said.

After one full year, the mine is expected to produce enough coal to spew about eight million tonnes of carbon dioxide into the atmosphere when it is burned. The three million tonnes of coal the mine will produce a year will create as many greenhouse gas emissions as the yearly energy use of over a million homes — more than the entire population of Nova Scotia. When Marshall hears those statistics, she thinks of the extraction of natural resources by large corporations coupled with the restriction of Indigenous Peoples’ access to traditional food sources, medicine and land. It’s the “continued poisoning of the people of Unama'ki, which is Cape Breton,” she said.

Those emissions will likely never register in Canada’s greenhouse gas accounting; much of the coal from the mine will be shipped off to Asia. Like oil, most emissions from coal are released when it is burned, but the environmental impact during the production stage is still significant. The process can also pollute waterways, like in Alberta, where rivers and streams have been “heavily contaminated” by coal mines. Each year, the Regional Municipality of Cape Breton, where the mine is located, treats around six billion litres of contaminated wastewater from abandoned mines.

Methane expert and Earth sciences professor at St. Francis Xavier University Dave Risk told CBC that Donkin “is likely the largest methane emitter in the province.” Emissions of the greenhouse gas — roughly 25 times more potent than CO2 over the course of a century — also happen during the production stage.

A Canada’s National Observer investigation highlighted concerns about the mine’s safety record, but also significant are the environmental consequences of coal, which releases more carbon dioxide than any other fossil fuel when burned. UN Secretary-General António Guterres has called on countries around the world to "cancel all global coal projects in the pipeline and end the deadly addiction to coal.”

The Donkin mine was closed between 2017 and 2020 when more than a dozen roof cave-ins prompted a series of on-and-off stop-work orders from the province. Now, as the price of metallurgical coal has spiked, the mine is back in action.

Canada has passed legislation to phase out coal-fired electricity by 2030. But there were exceptions made for Nova Scotia and Saskatchewan that allow them to keep using some coal as long as they reduce an equivalent amount of emissions in other areas. For Nova Scotia, that’s a 25 per cent reduction by 2020, and 55 per cent by 2030.

Since the announcement was made in 2018, Nova Scotia has set its own goal to end coal-fired electricity — which represents about half of Nova Scotia’s power — by 2030.

The coal at the Donkin mine is mostly subsea metallurgical coal, also known as coking coal, which is used for steel making, rather than the thermal coal used for heating homes and businesses. Metallurgical coal releases up to twice as much CO2 as thermal coal and makes up five per cent of the global greenhouse gas emissions that cause climate change.

The federal government has committed to ban the export of thermal coal by 2030, which experts still say is too late. However, there are no plans to date to ban metallurgical coal. In a statement, Environment and Climate Change Canada said new technology is being developed to make steel without using coal.

“Canada is encouraged by some emerging clean technology solutions to replace the need for metallurgical coal in steel making. However, existing steel-making facilities in Canada and elsewhere require expensive upgrades before they can transition to cleaner manufacturing processes,” the office said.

“New technologies are being developed and will gradually become commercially viable. Canadian facilities will continue to require metallurgical coal during the transition period required to reach net-zero emissions.”

Unless government rules change, the Donkin mine has a lifespan of 30 years.

Canada’s National Observer has made multiple attempts over the past month to contact Kameron Coal, the owner of the Donkin mine, through numerous channels but was not able to get a comment. The company doesn’t have a listed media contact, but Anthony Webb, president of Kameron Coal, was contacted multiple times through email and LinkedIn.

When the mine was first open, local resident LeRoy Peach worried about the emissions from the operation swirling in the air outside his home. Peach, a retired schoolteacher, is part of the Cow Bay Environmental Coalition — a passionate group of residents who have been speaking out about the environmental, safety and noise issues around the Donkin mine.

Even when the mine wasn’t in production, it still released methane, which is drawn out of the mine with fans that pull in fresh air to dilute the dangerous gas and prevent explosions. As the Climate and Clean Air Coalition notes, “While methane does not cause direct harm to human health or crop production, ozone is responsible for about one million premature respiratory deaths globally. Methane is responsible for about half of these deaths.”

“I'm soaking in this methane all the time where I live, right over there. I've received the brunt of this stuff,” he said while sitting at his cousin’s house a couple of kilometres from the mine.

Donkin not under cap and trade

Unlike all other fossil fuel industries, underground coal mines are exempt from regulations, which levy financial penalties against companies that exceed certain emissions thresholds. Under cap and trade, fossil fuel operations are required to keep emissions under 50,000 tonnes of carbon dioxide equivalent. Those that exceed the limit must buy credits from lower-emitting companies. But in 2018, the federal government exempted underground coal mines from cap and trade as long as the province is meeting emissions targets. That means there is no financial penalty levied against the underground mine, regardless of how high its carbon dioxide emissions climb.

In 2017, before it was exempted from cap and trade, Donkin emitted 76,337 tonnes of greenhouse gas equivalent, exceeding the allowable limits by half. That’s the equivalent of driving 16,448 gas-powered cars for a year. Community minutes obtained by the Sierra Club and provided to Canada’s National Observer show the mine’s emissions during 2019, its last full year of production, soared to a total of almost 423,000 tonnes, or eight times the allowable limit.

Now that the mine has reopened, the company will be allowed to self-report emissions and won’t need to buy credits when it goes over the cap threshold. Ultimately, this means emissions will continue unchecked and unregulated once production begins.

The province noted in a release following the reopening of the mine that it had “directed Kameron Coal to update its greenhouse gas management plan to ensure there will be measures in place to mitigate emissions.”

At a meeting for the community liaison committee — a group made up of Kameron Coal representatives and local government officials — in August, methane emissions were brought up. In response to a question about emissions levels, Kameron Coal’s Cameron McLennan said “that it is not a concern and that we are a small player in the large emitters in Nova Scotia,” according to meeting notes given to Canada’s National Observer.

As Tynette Deveaux with Sierra Club Canada’s Beyond Coal Atlantic campaign points out, coal is coal, whether metallurgical or thermal. The organization is calling for the permanent shutdown of the mine.

“Mining operations like this always end up costing us more than they’re worth in the long run,” she said.

“Taxpayers will be on the hook for the cost of toxic cleanups, repairing roads damaged by the haul trucks, the public inquiries following mining disasters — the list goes on.”

This is Part 2 in a Canada’s National Observer series on the Donkin mine. Read Part 1 and Part 3.

Saving the planet from global

Saving the planet from global warming isn't about closing coal mines. The human race buys a billion tonnes of steel a year; we currently can barely make it except with coal, and if we don't supply it to the people in China and India that make most of OUR steel, they'll buy it somewhere else, because the need for steel will not go away.

The solution is to move every steel smelter to green steel-making, which is a HUGE, very difficult challenge; but the sooner we get on it, the sooner ALL the coal mines will close for lack of customers.