‘The entire world is watching’: Guilbeault, others push for bolder global biodiversity plan as negotiations heat up 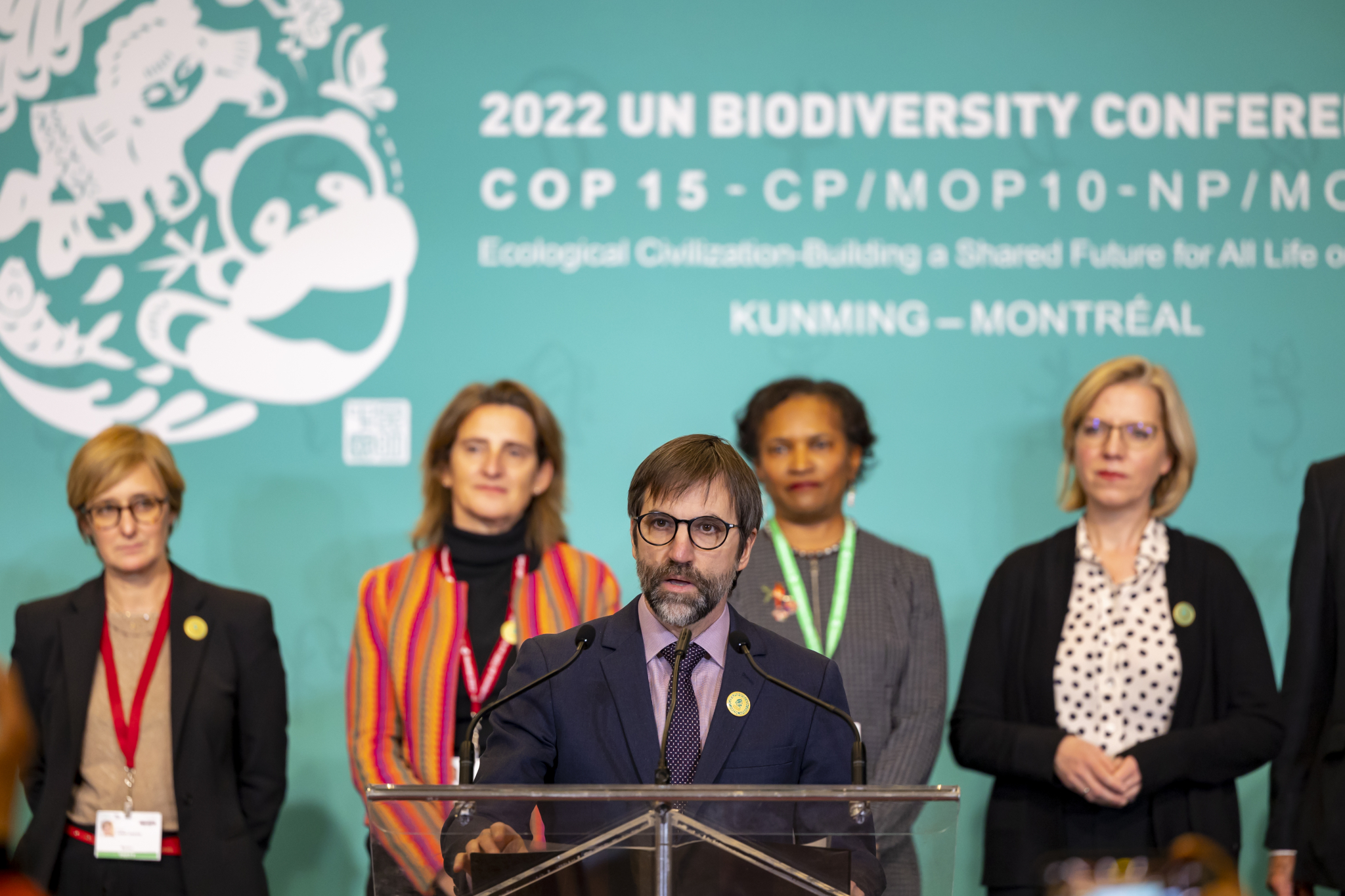 A snowstorm may have blanketed Montreal Friday, but inside the COP15 venue, negotiations on a global plan to protect nature are heating up.

At a news conference, environment ministers from Canada, France, the U.K., Chile, Costa Rica and other countries urged fellow delegates attending the United Nations biodiversity conference to rally around their 30x30 target, which would require countries to protect 30 per cent of their lands and waters by 2030. That goal is the primary objective of the High Ambition Coalition, a negotiating bloc of 116 countries calling for a bold global biodiversity plan, according to the group.

“As we work to finalize an ambitious global biodiversity framework, the entire world is watching,” said Environment and Climate Change Minister Steven Guilbeault. “Time is now. We must act together and we must act decisively.”

Guilbeault compared the 30x30 target, and the goal of halting and reversing biodiversity loss, to the Paris Agreement’s climate goal of holding global warming to 1.5 C. Having a central target like that is one way to facilitate negotiations on other related issues, like how to make the financial resources available to reach that goal. Essentially, there needs to be something tangible to negotiate; otherwise, it’s just words.

Guilbeault, who on Thursday was tapped by COP15 president and Chinese Minister of Ecology and Environment Huang Runqiu to co-lead consultations with other countries on how to land an agreement, told Canada’s National Observer he’s optimistic that countries will reach a consensus.

“I've met with dozens and dozens of countries … and I've not met one country who’s said to me, ‘We disagree with 30x30.’ Not one in the last 12 days I've been here,” Guilbeault said.

Some issues remain tough sticking points, he added, but progress is being made. These include negotiations on how countries could share or benefit from scientific advancements made using nature within their borders, technically called digital sequencing information, and how to scale up the billions of dollars needed to protect ecosystems around the world.

On Friday, Canada announced $255 million to support nature protection. The funding is in addition to the $350 million Prime Minister Trudeau announced last week to support biodiversity conservation efforts in developing countries. Of the money announced Friday, $219 million, or 85 per cent, represents Canada’s share of replenishing a UN fund called the Global Environment Facility. Financial commitments like these are a tactic countries use in negotiations to demonstrate sincerity to other countries.

“We’re glad to see Canada playing a constructive role … and pressuring its allies to agree to increased funding,” Climate Action Network Canada’s climate diplomacy director Eddy Pérez said in a statement. “Today’s announcement is a strong demonstration of solidarity and a strategic move that cranks up the pressure on countries blocking progress on the finance discussions.”

At a news conference, Zac Goldsmith on behalf of the U.K., which co-chairs the High Ambition Coalition along with France and Costa Rica, said even if our economic systems have failed to value nature, there is no mistaking the cost of natural systems collapsing.

More money may unlock more nature protection as delegates near the end of #COP15 with a landmark agreement in reach.

“Right now, in Montreal, we have a once-in-a-generation opportunity and a responsibility to agree ... to put the world on a pathway to recovery,” he said.

“We know that we can't unlock ambition without finance, (and) that we're not going to have enough finance without ambition, either,” he added. “I think the move made by a bunch of donor countries yesterday to put new finance, significant additional finance, on the table has moved things along.”

The joint statement released by the European Union and 10 donor countries, including Canada, says they have committed US$5.33 billion in new funding. However, the U.K. was roundly criticized by civil society groups Thursday for its announced contribution of £29 million (C$48.3 million) to protect nature.

Pérez said that the question of how to make money available to developing countries to protect nature “looms over the final negotiations.”

“Over the past two weeks, we’ve seen an impressive convergence around the goal of an ambitious global biodiversity framework — but that’s only possible with an equally ambitious plan to increase the mobilization of international financial flows to the Global South,” he said. “African nations are calling for an annual pledge of US$100 billion for international biodiversity finance; the number in the current draft text, not yet agreed upon, is $10 billion.

“The coming hours and days will test the credibility of developed countries: are they willing to do what it will take to land a transformative plan to protect and restore biodiversity?”

The heart of UN biodiversity talks beats at the Indigenous Village, but will it give life to Indigenous rights in COP negotiations?

Where I get stuck is at the

Where I get stuck is at the point where Trudeau warned that 30x30 protected lands and waters does not mean that resource extraction would not take place in these "protected" places. Spoken like a true Canadian.

The world also watched as

The world also watched as Guilbeault approved the Bay du Nord deep sea oil development project that will spew 10 million gasoline powered cars worth of carbon emissions into the atmosphere for 30 years, without even taking into account downstream emissions in the environmental impact assessment for the project. The world watched as he approved a regional assessment for exploratory drilling off Newfoundland and Labrador, that also ignores downstream emissions. And the world watched as he approved a "'strategic assessment of climate change" that is little more than a technical manual on how to address climate change in project-level assessments - and, lo and behold, it locks in a practice of completely ignoring downstream carbon emissions in all projects. So, unfortunately, he and the Trudeau government have very, very little moral force or credibility here.