Ontario can ditch natural gas power by 2050 — but it’ll come with a $400B price tag: grid operator 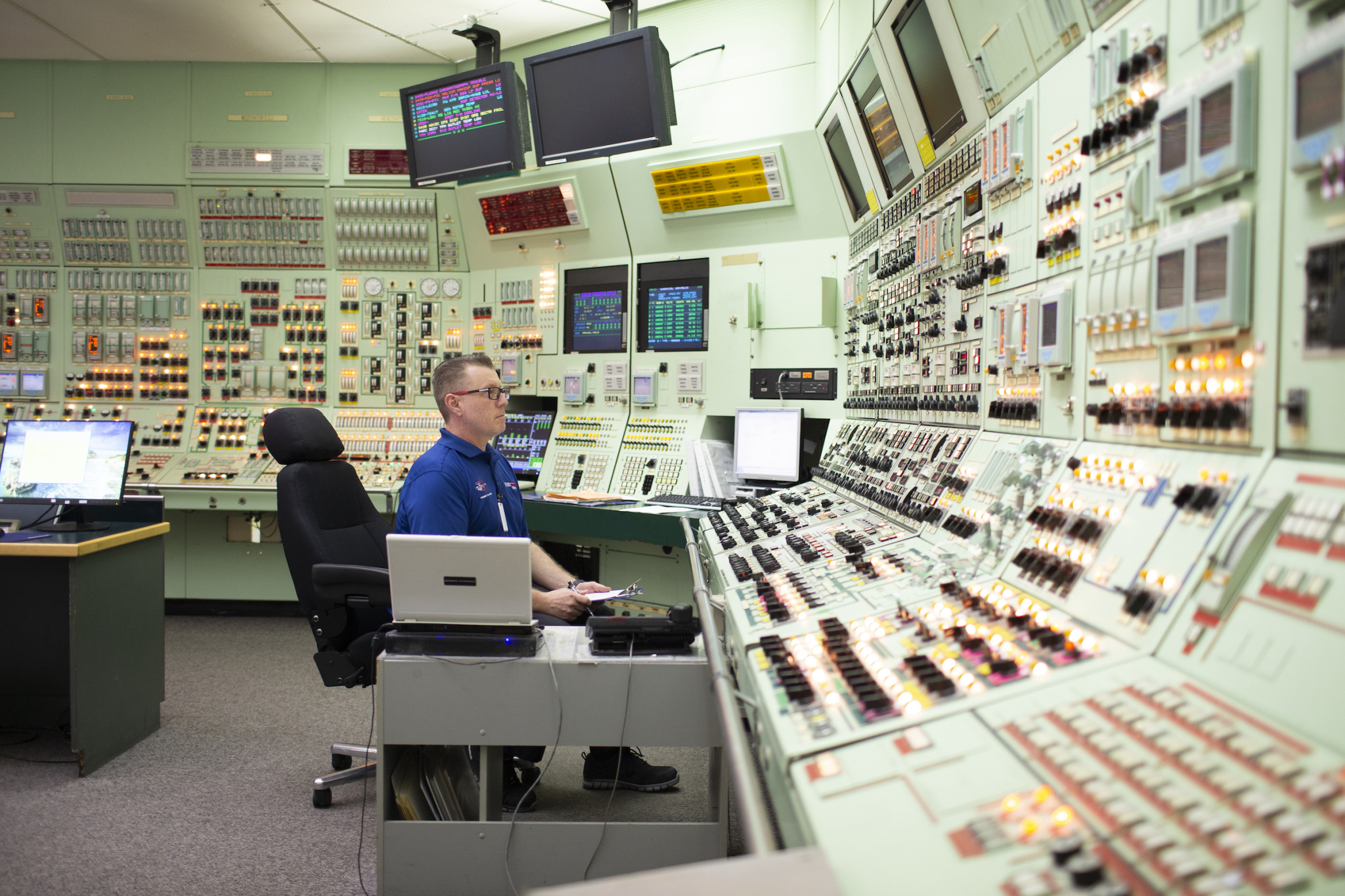 A view of the control room during a tour of the Pickering Nuclear Generating Station on April 17, 2019. Ontario's electricity grid operator plans to add more nuclear power to its energy mix by 2050. File photo by Carlos Osorio / Canada's National Observer
Previous story

Decarbonizing Ontario’s electricity system is going to cost about $400 billion over the next two and a half decades, and it’s going to require a “no regrets” kind of attitude to get there, according to a report from the province’s grid operator.

The Independent Electricity System Operator (IESO) published a report Thursday outlining what the province’s pathway to decarbonization could look like and when it would be feasible to halt new projects generating power from natural gas.

“With one of the cleanest electricity grids in North America, Ontario has a real advantage in enabling the decarbonization of the broader economy. The process of fully eliminating emissions from the grid itself, however, will be a significant and complex undertaking,” said Lesley Gallinger, IESO president and CEO, in a press release.

Ontario could put a moratorium in place for natural gas power by 2027, the report said, as long as there is enough nuclear power, renewable energy, electricity storage and conservation infrastructure in place to support the province’s energy needs beforehand. This alone would require a $26-billion investment.

Ontario faces a growing need for power. The IESO forecasts the province’s electricity capacity will need to more than double from today’s 42,000 megawatts (MW) to 88,000 MW by 2050. The grid operator’s path to decarbonization includes adding extra power, mainly from nuclear, wind and hydrogen sources. Adding solar power, imported electricity, battery storage, demand response programs that would encourage customers to adjust their electricity usage and a small amount of hydroelectric power is also part of the plan to round out what will be left of today’s capacity.

The IESO report follows an October report recommending Ontario increase natural gas-generated electricity by up to 1,500 MW to keep up with the province’s future energy needs. Ontario Energy Minister Todd Smith later approved more natural gas power for the province in line with the IESO’s recommendation.

The decision means planet-warming greenhouse gas emissions from Ontario’s power sector could rise by 260 per cent by 2040. Smith justified the move as a short-term solution that would stave off rotating blackouts and significant bill increases.

While the IESO’s latest report sets an end date for new natural gas projects, its pathway to net-zero emissions wouldn’t stop existing facilities from continuing to run until 2050. However, they would be used mainly for “reliability purposes” by 2035 and consequently would reduce their capacity by 2,000 MW to a projected 8,000 MW.

For Jack Gibbons, chair of the Ontario Clean Air Alliance, the plan is “simply not good enough” because of how expensive and slow it will be.

Decarbonizing Ontario’s electricity system is going to cost about $400 billion over the next two and a half decades and require a “no regrets” kind of attitude to get there, according to the province’s grid operator. #ONpoli #EnergyTransition

“We actually have the opportunity to phase out gas power by 2030 and lower our electricity costs if we focus on the lowest costs and quickest options to decarbonize our grid — namely, energy efficiency and renewables,” he said in an interview with Canada’s National Observer.

“The new gas plant moratorium should be effective today.”

In an interview with Canada’s National Observer, IESO vice-president of planning, conservation and resource adequacy Chuck Farmer said the grid operator needs dispatchable electricity generation, which can be turned on and off when needed and run reliably for at least four hours. These requirements during the transition to non-emitting power limit the types of generators that can be used, and therefore, Ontario’s electricity system would not remain reliable in the short-term without natural -gas, he said.

“It’s a little bit of a short-term tradeoff.”

Gibbons also referenced a study commissioned by the IESO from Dunsky Energy + Climate on distributed energy resources (DERs), which are typically smaller-scale electricity-producing and storing technologies.

The study concluded investing in energy efficiency, renewable energy sources and storage could produce $290.6 billion in benefits, meaning lower electricity costs and significantly fewer emissions — both of which the Ontario government should be aiming for, said Gibbons.

Farmer said he is certain “lots” of these additional energy supplies needed for the future will be considered DERs, but that the IESO didn’t explicitly examine this while putting together its report.

“Where we sit right now, people are adopting distributed energy solutions, but not at the pace that is required to be able to [support Ontario’s growing energy needs],” said Farmer. “Our reliability needs are coming at us fast as Pickering [Nuclear Generating Station] retires, and so you need to be able to replace 3,000 MW of Pickering capability by 2026 or 2027, which is very challenging to do, and there isn’t the momentum in the distributed energy community to do that.”

The IESO laid out several “no regret” actions Ontario needs to take to achieve a decarbonized grid in 2050, including accelerating efforts to acquire new non-emitting supply and beginning the planning, siting and environmental assessment work needed for these projects now to accommodate for how lengthy some of these processes can be.

In a news release from the Pembina Institute, a Canadian non-profit focused on energy and the environment, senior director for communities and decarbonization Carolyn Kim raised concerns about Ontario falling behind the country’s goal to achieve a net-zero emissions electricity grid by 2035.

“While these analyses are an encouraging effort to support informed dialogue on significantly reducing emissions from electricity production in Ontario, they fall short by underestimating the reliability of diverse clean energy portfolios,” said Kim. “We strongly caution against new gas investments that will be incompatible with forthcoming Clean Electricity Regulations in 2035, with the costs for these stranded assets likely to be loaded on to ratepayers and taxpayers in the province.”

Will ‘grid diplomacy’ lead to decarbonization?

“Decarbonizing Ontario’s electricity system is going to cost about $400 billion over the next two and a half decades, and it’s going to require a “no regrets” kind of attitude to get there.”

A breakdown of the $400B would be useful, as would a definition for “no regrets”; I was with no clue what that meant in context.

When I read energy reportage that appears to indicate the writer is not fully conversant with the topic, it is difficult to give it credence.
In the above snippet, for example, hydrogen is characterized as a source of primary energy, which it is not. There are no stores of hydrogen to be tapped into; it must be refined – using energy – from other resources (e.g. water, methane) to become, in one of a rainbow of variants, a carrier of energy.**

“This alone would require a $26-billion investment.”

This sentence ends a descriptive paragraph in which we are not informed of specific uses for the money, which would have been helpful.

“However, they would be used mainly for “reliability purposes” by 2035 and consequently would reduce their capacity by 2,000 MW to a projected 8,000 MW.”

For broader context, it may have been useful to compare that 10,000 MW number (apparently, the max forseeable methane sourced generation) to something extant and known. E.g. it is more power than is generated by the Pickering (3,100 MW) and Darlington (3,500 MW) nuclear power stations combined. The Bruce plant (6,230 MW) is the largest nuclear generation station in the world. So, the plan for methane generation is to provide additional capacity equalling about 78% of Ontario’s nameplate nuclear capacity.

That’s a lot of burned methane.
““It’s a little bit of a short-term trade-off.”

This quote from the grid operator is a candidate for “understatement of the year”.

My last observation relates to the view – repeated within this text -- that cheap energy is, necessarily, a good thing. With all the talk of “price signals” reducing demand (e.g. carbon taxes and time-of-day pricing), why are we looking at similar mechanisms – i.e. higher prices -- to reduce electricity demand, generally?

**Though, to be honest, I don't know how "blue" hydrogen is categorized; it seems a combination of primary energy and energy carrier.

Dang! I do wish there an edit

Dang! I do wish there an edit capability for comments.

"why are we looking at similar mechanisms"

""why AREN'T we looking at similar mechanisms"

The comment facility in CNO is very primitive, indeed, and at times annoying, when an internet link gets filtered out. (Why that happens in some cases but not in others is a mystery.) One should be able to edit one's own comments and it should be possible to express agreement or not with someone's comment.

Ontario's 2022 budget is $199 Billion (I guess that is in round numbers) - so spending $400 million over 2.5 decades (30 years), or $13 Billion a year, would represent 6-7% of the current budget. Allowing for inflation in the economy, this should be quite doable - given the desire and the determination to decarbonize.

There was (and perhaps still

There was (and perhaps still is) lots of hydro power available from Hydro Quebec ... Ontario even purchased some. But before the IESO report, not only did they refuse to get more from Quebec (which was selling to the US at something like 3-4 cents/kwh), but the cancelled what they already had, all of a sudden creating a need for lots more gas-powered plants.
If batteries are what's needed, then I suggest that Ford and cronies get cracking to make that happen.
I'd also suggest that the function of the IESO should be handled by someone other than a gas-and-nuclear biased group/organization.
We've got so much BS with foxes guarding the chicken coops, it's tantamount to open season on chickens: just leave the coop doors wide open, why not.
The citizenry felt so strongly about No More Gas Plants, that Ford's predecessor had to cancel contracts for new ones.
Had Ford concentrated on fixing the problems with wind turbines (e.g., by siting them properly, not right at the fences of farmers), and had there been proper inspection of installations, there wouldn't have been the complaints that surfaced in Northern Ontario. Both the Liberals and the Conservatives handled that badly.
My personal vision of distributed electricity is solar panels on every rooftop, and a battery to go with it. There's really no need for profit-taking enterprises to be involved in every watt of electricity produced.

Good story until you quote

Good story until you quote Jack Gibbons, chair of the Ontario Clean Air Alliance. The name of the organization itself is a misnomer. The OCAA got its start advocating FOR natural gas and receiving money from the natural gas industry. How is that "clean air"? Now it works as a front for the anti-nuclear community. What has that got to do with "clean air"? The OCAA's so-called "solutions" are unworkable and would guarantee the long term need for natural gas.