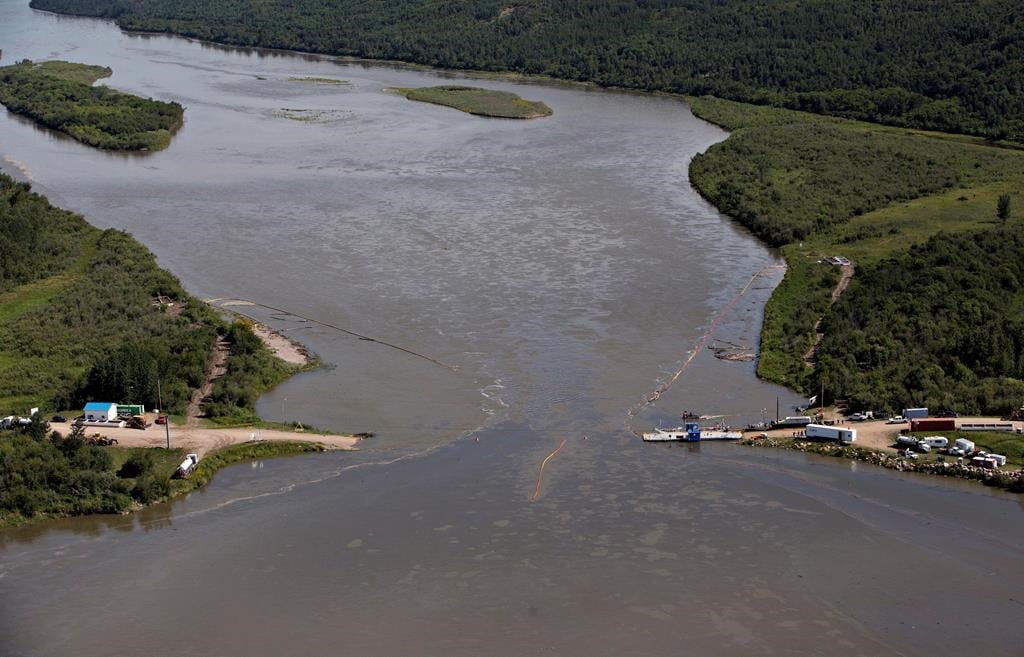 It appears Husky Energy knew something was amiss with one of its oil pipelines about 14 hours before the Saskatchewan government was notified.

Husky vice-president Al Pate says pipeline monitoring detected some irregularities Wednesday evening and crews were on site the next morning.

He says there will be an investigation into why it took so long, but the focus now is on cleanup.

Communities affected by an oil spill in the North Saskatchewan River can expect precautionary drinking water measures to be in place for weeks or even months, says a Saskatchewan government official.

"It could go on for some time."

Two cities downstream from the Husky Energy pipeline leak near Maidstone, Sask., have stopped drawing water from the river.

North Battleford shut down its intake on Friday and is relying on a limited supply from wells.

Residents in the area are being urged to conserve water and not use that part of the river for recreation. Hospitals are looking at alternative water supplies.

Ferris estimates the water supplies of close to 70,000 people have been affected so far and that the slick has travelled about 370 kilometres.

She also confirmed that some oil sunk below the surface of the river, complicating the cleanup job.

About 70,000 litres of an oil−soil mixture have been cleaned up around the source of the leak and another 118,000 litres of oily water has been skimmed from the river, but officials don’t know how much oil has been recovered.

Five booms have been placed on the river with "varied levels of success," said Wes Kotyk with Saskatchewan’s Environment Ministry. He added that four birds, one frog and one fish have died as a result of the spill so far.

Calgary−based Husky, which is controlled by Hong Kong billionaire Li Ka−Shing, has apologized.

"We realize this has been a very challenging time for everybody, with the spill impacting people, the environment and local businesses," said Pate, who is overseeing the response.

"We’re deeply sorry this has happened. We accept full responsibility for the event and for the cleanup and we will make things right."

Pate said the breached pipeline was built in 1997 and was subject to a "rigorous" corrosion monitoring program.

The Federation of Sovereign Indigenous Nations is demanding representation at the command centre handling the spill. Chief Bobby Cameron said the Sweetgrass First Nation, Battleford Tribal Council and the Prince Albert Grand Council were preparing for the oil slick as it approached their communities.

The pipeline that leaked last Thursday runs from Husky’s heavy oil operations to its facilities in Lloydminster and carries oil mixed with a lighter hydrocarbon, called a diluent, that’s added to ease the flow.

Prince Albert’s city manager Jim Toye said its reservoirs had a two−day supply of water and the city could get permission from the province to tap its storm retention pond for treatment and distribution to add another four to five days’ worth of water.

Work was already underway to build a temporary pipeline stretching 30 kilometres to draw water from the South Saskatchewan River, should the water emergency continue for a longer period.

The city also ordered there to be no outdoor irrigation, except if using reclaimed water; no washing of sidewalks, driveways, tennis courts, patios or other paved areas; and restaurants have been told to serve water only if customers request it.

"We need a deterrent," he said. "We don’t want anyone thinking this doesn’t apply to them."

— Editor's Note: This article has undergone a correction. A previous version stated that Chinese billionaire Li Ka-Shing, who controls Husky Energy, apologized for the oil spill. The apology was in fact made by Husky's vice-president, Al Pate.

"Five booms have been placed

"Five booms have been placed on the river with "varied levels of success," said Wes Kotyk with Saskatchewan’s Environment Ministry."

Translation: none of them worked, but some failed worse than others.

"He added that four birds, one frog and one fish have died as a result of the spill so far."

Right, of course he and Brad Wall have been out there doing the counting themselves. What a ridiculous statement.

Not sure if it's just

Not sure if it's just coincidence but there was a backhoe parked along the shore at the fishing hole 150 meters east of the Toby Nolet Bridge 3 days before the RCMP were on scene which is now their base of operations for the spill cleanup.

Might just be a coincidence, perhaps someone can ask them.