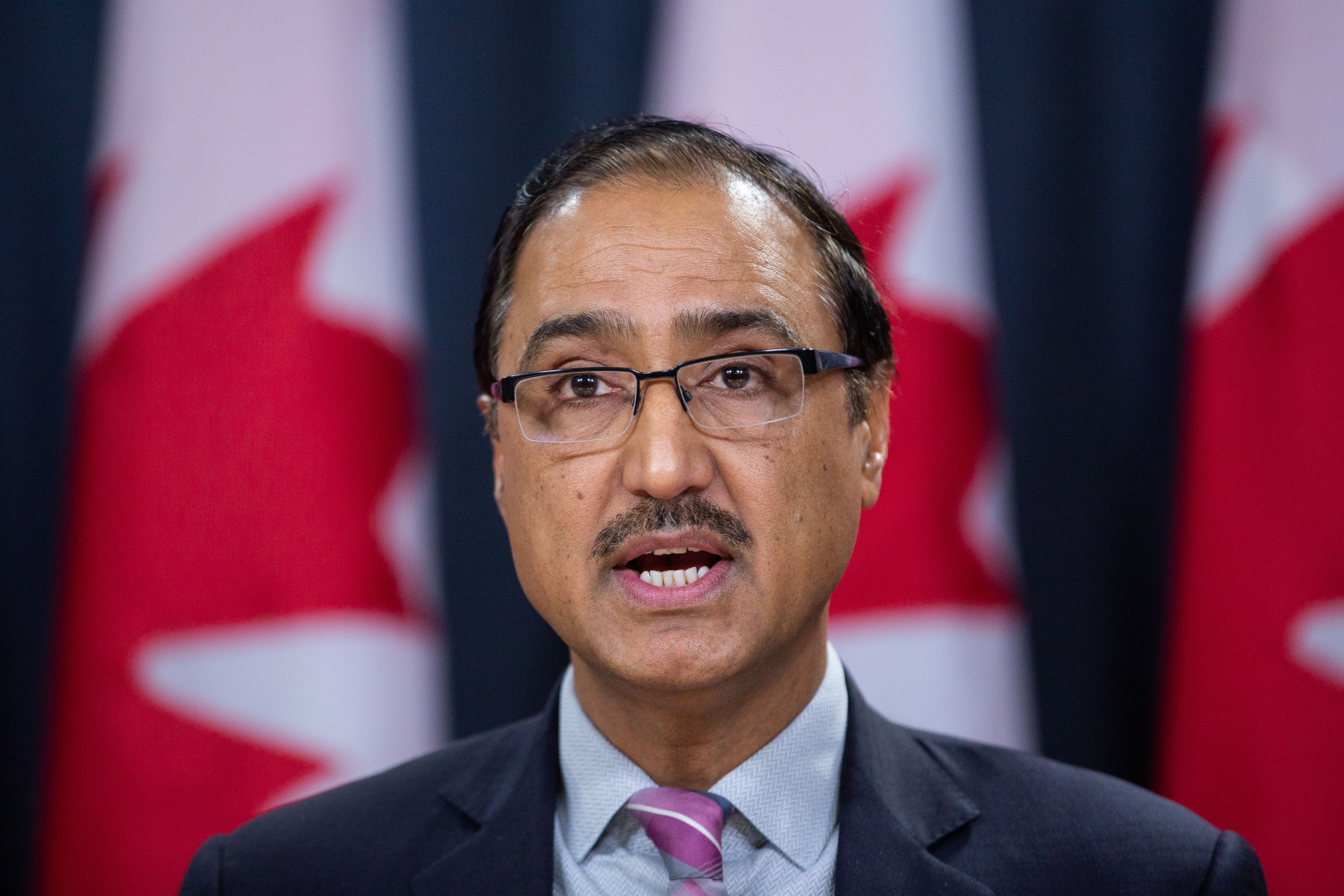 The Trudeau government says it's disappointed that a U.S. judge has halted progress on building the $10-billion Keystone XL crude oil pipeline.

The major oil pipeline proposed by Calgary-based TransCanada Corp. would link Alberta's oilsands to refineries and overseas markets on the Texas Gulf Coast. The Canadian oilpatch has said that such projects are desperately needed to help the industry reach new customers and expand.

U.S. District Judge Brian Morris put the project on hold Thursday, ruling that the potential environmental impact had not been considered as required by federal law. Environmentalists and Native American groups had sued to stop it, citing property rights and potential oil spills. It's been in dispute for a decade.

"We are committed to supporting our energy sector and the hard-working Canadians it employs," said Vanessa Adams, a spokeswoman for Canadian Natural Resources Minister Amarjeet Sohi. "Our government has always supported the Keystone XL project, and we are disappointed by this decision."

In an email to National Observer, Adams also said that the project would support "good, middle-class jobs in Canada" and boost exports, while fitting in with a climate change plan proposed by the Alberta government. The Alberta plan caps the annual carbon pollution allowed from the oilsands sector, which is the country's fastest growing source of greenhouse gas emissions.

"The project has received all necessary approvals in Canada," said Adams. "The pipeline must operate within Alberta's cap on emissions, a critical piece of Canada's climate change plan."

TransCanada says it remains committed to the project despite the Montana judge's ruling that it must pass a further environmental review.

In Edmonton, Alberta Energy Minister Margaret McCuaig-Boyd called the decision a "frustrating setback," but said it was not enough for the government to consider "quitting" in its battle. "We're going to continue to keep going."

McCuaig-Boyd said the Alberta government had spoken to TransCanada officials, and described the pipeline as critical for the province, country and energy sector. She also drew attention to the embattled Trans Mountain pipeline expansion proposal to bring oilsands oil to tankers in Burnaby, B.C.

"This ruling by a foreign court underscores once again the urgent need for Canada to build pipelines within our own borders, including the Trans Mountain expansion," McCuaig-Boyd said.

Before she was elected premier of Alberta in 2015, Rachel Notley told the Calgary Herald her government would not lobby former U.S. president Barack Obama's Washington on behalf of the Keystone XL project. She described the pipeline as sending "thousands and thousands of jobs to Texas."

But on Friday McCuaig Boyd said Notley's New Democratic Party government had always supported the Keystone XL plan. "We have said our preference would be Canadian pipelines to Canadian tidewater, but at the same time this absolutely represents a number of jobs, we're fairly intertwined with the U.S. and Houston area, the refineries there."

The federal court order blocks a Trump administration permit for the construction of the pipeline.

Reacting to the news on Friday, President Donald Trump called the ruling a "political" decision that was a "disgrace." He also said he expected an appeal and that his administration would soon appoint new judges to the appeals court.

Obama appointed Morris, the judge who made the ruling.

TransCanada shares on the Toronto Stock Exchange fell by as much as 2.75 per cent in early trading on Friday.

"This is the world's longest tug of war, with western Canadian oil prices as the rope," said Zachary Rogers, a refining and oil markets research analyst at Wood Mackenzie.

"While definitely a major setback in terms of timing, this is unlikely to be the nail in the coffin for Keystone XL. Exact legal recourse options are unclear, but the most likely result is either an escalation through the courts or an additional State Department review and President Trump re-approving the line."

A shortage of export pipeline space to carry away growing oil production in Alberta has been blamed for recent steep discounts in prices for Canadian oil as compared to New York-traded benchmark oil.

Analysts say as much as 110,000 barrels a day of crude oil is currently being left in the ground in Western Canada rather than being produced and sold at unprofitable prices.

The 1,897-kilometre pipeline would carry as much as 830,000 barrels of crude per day from Hardisty, Alta., to Steel City, Neb., and on through a half dozen states to refineries on the Gulf Coast.

Becky Mitchell, chairwoman of the Northern Plains Resource Council, a plaintiff in the Montana legal action against Keystone XL, said her environmental organization is thrilled with the ruling.

The company and opponents of the project have been in a decade-long dispute that has spanned several presidencies and involved standoffs between protesters and law enforcement.

In 2008, the U.S. State Department issued a presidential permit for the pipeline and TransCanada filed paperwork to expand the project. After years of legal wrangling, Obama rejected the permit in 2015.

The company responded by seeking $15 billion in damages. Trump signed executive actions to again advance construction of the project in 2017.

With files from National Observer's Trish Audette-Longo, Dan Healing from The Canadian Press and The Associated Press

That Trudeau is disappointed

That Trudeau is disappointed is totally understandable. After all, he's an oilman now.

Our energy minister understands I presume, that 'the foreign court" that blocked the Keystone, is not foreign to the land and water it is considering in its ruling. What the people on the groun opposing the Keystone see is 'a foreign company' eager to use their land and watersheds as potential sacrifice zones for foreign oil.

Whatever position we take on the Keystone XL, we should get straight which side of that border we're standing on......and be glad that in the long term, most judges read the law rather than making it up as they go along.

Trump will try to stack those courts with judges who listen to him, but it won't be that easy. Harper never succeeded in appointing a conservative judge who put the law second....

Let's be glad that in a democracy, its no easy matter to stack a judiciary.

Environmentalists and believers in climate change rejoice. Why are politicians so afraid of taking the long view. Maybe they won’t get re-elected? How sad, maybe it is time to be brave and wise. If there is no climate change why are cities like London and Tokyo preparing for higher sea levels. Of course Alberta and Ontario don’t care. They don’t have any seafront cities but the USA does. When will they start preparing? Or are they already? Oil pipelines indeed! And the job issue is a big lie!