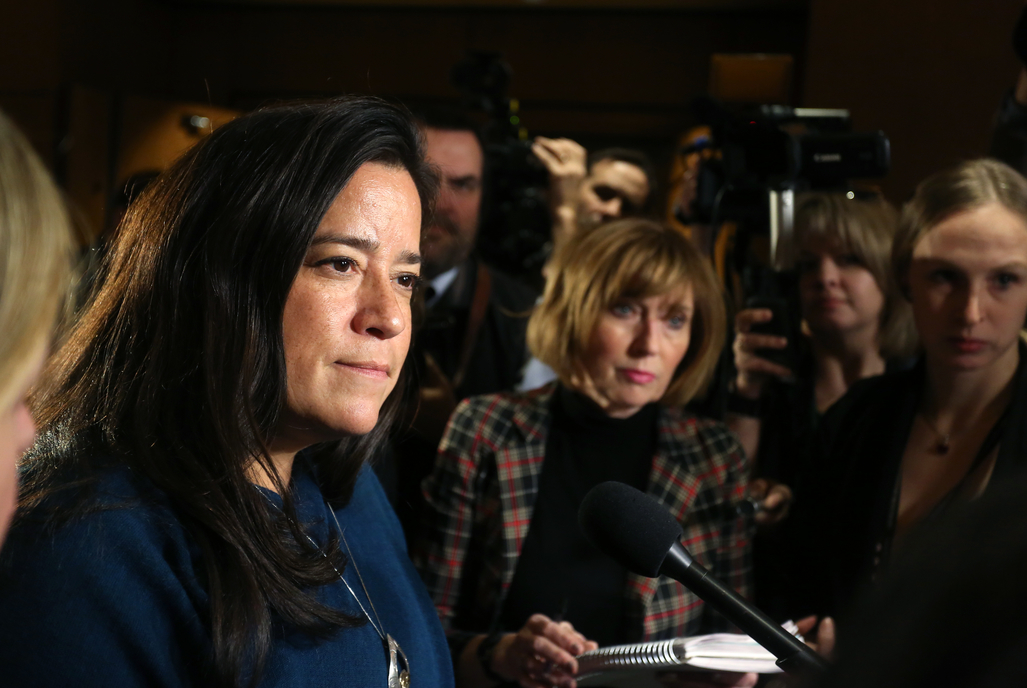 Jody Wilson-Raybould speaks to reporters in Ottawa on Feb. 27, 2019 after delivering explosive testimony to the House of Commons justice committee about the SNC-Lavalin affair. File photo by Andrew Meade
Previous story
Next story

Jody Wilson-Raybould, the former attorney general, warned Canada's top civil servant against political interference in a criminal prosecution during a 17-minute phone call last December, less than a month before she was demoted in Prime Minister Justin Trudeau's cabinet.

The audio file, released on Friday by the House of Commons justice committee, was submitted by Wilson-Raybould, further stoking the flames of a political crisis for Trudeau on the eve of a general election scheduled in October.

"I am just issuing the strongest warning I can possibly issue that decisions that are made by the independent prosecutor are her decision," Wilson-Raybould is heard saying in the Dec. 19 call which she recorded between herself and Michael Wernick.

She also told Wernick that she was uncomfortable about the call and felt that he, the prime minister and others in government could later be accused of political interference in the judicial process because of their actions.

But Wernick, the clerk of the Privy Council Office kept talking, explaining that the prime minister wanted to get something done on the file, one way or the other.

Wilson-Raybould said in an accompanying letter to the committee that she only “took the extraordinary and otherwise inappropriate step of making an audio recording of the conversation without so advising” Wernick because she was alone and anxious to have an exact record of what she expected to be “an inappropriate conversation.”

At the heart of the matter was a dispute between Wilson-Raybould and others in government, including the prime minister and finance minister, who wanted her to intervene in the criminal prosecution of SNC-Lavalin over corruption and fraud charges. The company was asking for a plea deal that would result in them paying a penalty and agreeing to a series of compliance measures, in order to avoid a trial and conviction.

Wilson-Raybould and Jane Philpott have both resigned from Trudeau's cabinet over the affair, as have Wernick and a senior aide to the prime minister.

The company had warned that such a conviction, which could result in a 10-year ban on their ability to bid on public contracts with the federal government, could cause thousands of job losses and the possible departure of their head office from Montreal.

Jody Wilson-Raybould speaks to Michael Wernick about the criminal prosecution of SNC-Lavalin during a Dec. 19, 2018 phone conversation. Audio released by House of Commons justice committee

Wilson-Raybould told Wernick she was trying to protect Trudeau

Wilson-Raybould told Wernick on the call that it would be inappropriate for her to interfere and that she was trying to protect the prime minister, while questioning whether Trudeau was being advised that he shouldn't get involved in the matter. She told Wernick that it was up to the director of public prosecutions to make the call and that any decision of the attorney general to intervene would reflect badly on the prime minister.

"We gave her (the director of the public prosecutor) and them the tools, the additional tools, I made it very clear at the cabinet table and other places, that these tools are at the discretion of the prosecutor, and everybody agreed to that and there was no guarantee that there would be a DPA (deferred prosecution agreement) in this or any other case," Wilson-Raybould continued on the call.

Wernick was clerk of the Privy Council Office, which is the top bureaucratic position that liaises between the Prime Minister's Office, the government's cabinet, and the broader public service. Wernick had previously told the House of Commons justice committee that he didn't believe he had issued veiled threats, and couldn't recall his exact words in the conversation because he wasn't "wearing a wire."

The recording and the string of other emails and text messages Wilson-Raybould presented to the committee on March 26 followed a request from NDP MP Murray Rankin, painted a picture of a government machine that was piling pressure on the country’s chief legal advisor to intervene in a case despite her repeatedly telling them it was inappropriate to do so.

Among other revelations in her submission, were details about a strange and false story that former Trudeau aide Gerald Butts used to persuade Wilson-Raybould's chief of staff, Jessica Prince, about the need to intervene.

Butts, who resigned from Trudeau's office on Feb. 18, claimed falsely during a Dec. 18 meeting with Prince that former prime minister Brian Mulroney had urged former attorney general Kim Campbell to intervene in a case involving the wrongful conviction of David Milgaard, according to a text message that Prince sent to Wilson-Raybould.

Prince went to this meeting after receiving a note that Butts and Trudeau's chief of staff Katie Telford "urgently" wanted to meet to discuss the topic.

Wilson-Raybould said she had met Campbell, who succeeded Mulroney as prime minister in 1993, for a coffee on the next day and that Campbell denied Butts' version of events.

"PMKC had a vivid memory of the (Milgaard) case and reflected on it in a manner that reflected to me that it was still quite top of mind for her," Wilson-Raybould wrote in her submission. "Needless to say, she categorically denied what Mr. Butts had said and was quite offended and outraged by the comments. She adamantly denied the characterization not only of her as the attorney general but of her former boss, (former) prime minister Mulroney."

This meeting between Campbell and Wilson-Raybould also occurred on the same day as the recorded conversation with Wernick.

Wilson-Raybould also said that she was aware of an internal memo, requested by Wernick and prepared by her department, that evaluated the consequences of a conviction, but didn't recall telling her deputy minister, Nathalie Drouin, not to share it with the Privy Council Office. Wilson-Raybould said that Drouin delivered this memo by hand to her chief of staff, Prince, on Nov. 13, 2018.

Drouin had testified at the justice committee that she withheld a report on this topic from PCO, following Wilson-Raybould's instructions.

Wilson-Raybould, however, said she did not recall giving instructions on Sept. 18 to her deputy, officials and staff, about communications with the clerk.

"Further, I am not clear why the Clerk would be asking for such an opinion in the first place, having known that I had already considered the matter and decided not to intervene."

The former attorney general also said that there was no information in the memo about economic consequences in Quebec or Canada of a possible conviction of SNC-Lavalin.

Wilson-Raybould's submission was delivered to the House of Commons justice committee after Liberal MPs voted to shut down its deliberations on March 13, despite howls of a "coverup" from angry Conservative MPs.

Her testimony includes elements that would normally be protected under solicitor-client privilege and cabinet confidences, however, Wilson-Raybould was allowed to discuss the matters after Trudeau's cabinet adopted an order that gave her permission to speak about matters related to SNC-Lavalin that occurred while she was attorney general.

Wilson-Raybould also told Wernick neither she nor the prosecution can act in a way that isn't objective and independent, that is partisan or politically motivated.

"All of this screams of that," she said, clearly stating that she considered the conversation and others previously as entirely inappropriate political interference. "So I am actually uncomfortable having this conversation but I'm happy to talk to you."

Wernick responded that it seemed that people were talking past each other.

"This goes far beyond saving jobs, this is about the integrity of the prime minister, and interference," she said a little later in the conversation. "There is no way that anybody would interpret this other than interference if I was to step in."

Wilson-Raybould resigned from Trudeau's cabinet on Feb. 12, after first being shuffled out of justice (she was both minister of justice and attorney general). She still sits in Parliament as the Liberal member for Vancouver Granville.

She said in the letter to the committee that she met the prime minister in a series of meetings in Vancouver after Jan. 14, when she was shuffled to Veterans Affairs, and that they were “meetings which led to my resignation from cabinet.”

This was her only reference to events that occurred when she was not attorney general.

Trudeau's office released a statement to media outlets on Friday saying that it wasn't previously aware of the full contents of the audio recording. It added that Trudeau should have spoken directly to Wilson-Raybould while regretting that she hadn't come to him directly.

The PMO also reiterated previous statements acknowledging that there was an erosion of trust between all of the parties involved.

"All the facts are on the table now, and everyone involved has shared their perspective, including the prime minister. We are focused on moving forward as a team on the issues that matter to Canadians and governing in the best interests of the country," PMO spokesman Cameron Ahmad said.

Opposition Conservative Leader Andrew Scheer said Friday that the latest documents show that Trudeau led a political campaign to interfere in the prosecution of SNC-Lavalin and that he fired his attorney general for refusing to follow his instructions.

Scheer also reiterated his previous calls for Trudeau to resign over the matter.

NDP Leader Jagmeet Singh has called for a public inquiry into the matter — calls that were repeated by a member of his caucus, Tracey Ramsey, on Friday. Ramsey said that Wilson-Raybould's evidence was "so compelling, widespread and well documented that we must have an independent public inquiry to get to the truth about the damning evidence of political interference by the prime minister."

Green Leader Elizabeth May has also called for an independent public inquiry into the matter.

Some years ago Mr. Poilievre,

Some years ago Mr. Poilievre, in what some might call a Faustian bargain, willing gave away his own political voice to his party’s master.

Since those halcyon days of false power he’s quietly soldiered on in opposition, and though he may speak he will never regain his political voice. No matter what he now says I can’t hear him.

Hopefully the Trudeau government will reap what it has sown.

This is so incredibly sad.

This is so incredibly sad. The Liberal government has completed a very significant list of badly needed legislation, not the least of which was the assisted dying legislation and marijhuana (sp?) legalization. They have been far and away a better government in my opinion than the previous one. But the old Liberal big business bias has crept through, in both the election reform and this. So very sad, and damaging.

Its over for Trudeau, he

Its over for Trudeau, he makes one mistake after another.... https://canadianviews-ymo.ca/trudeaus-canada-where-diplomacy-goes-to-die/

Butts is a reader. He was

Butts is a reader. He was just quoting from Mulrony’s book. If Kim Campbell has a problem with that, she should take it up with Mulroney.

One thing that occurs to me

One thing that occurs to me when I listen to the phone conversation Wilson-Raybould recorded without Wernick's knowledge: SHE knew the conversation was being recorded and HE did not. This left her able (potentially) to tailor her statements so that she would appear in a certain light, while "setting him up" to respond in a way that may have made him look bad. Also, talking about things that took place in the past does not "prove" they happened as described. Just saying...