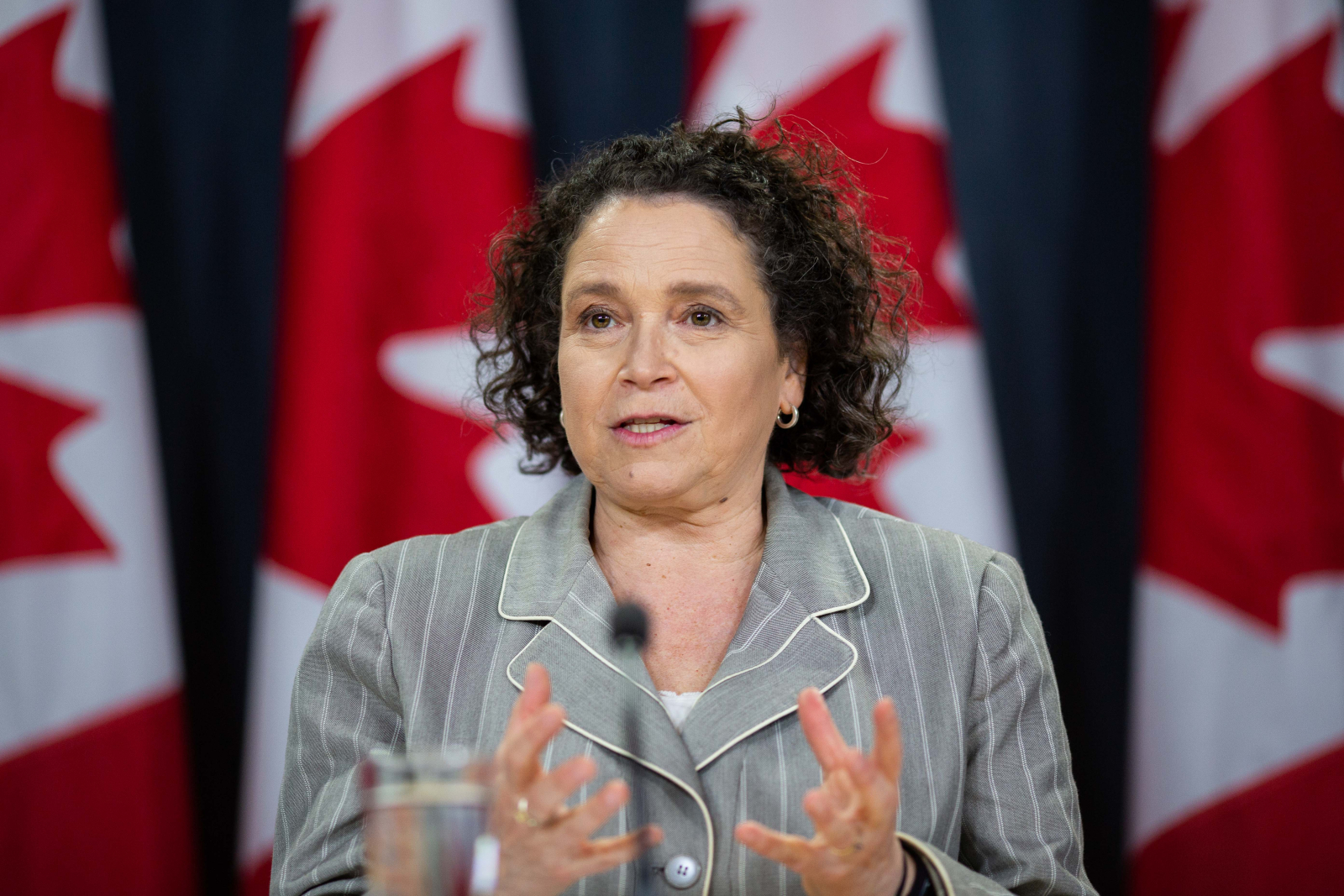 Julie Gelfand, the federal commissioner of the environment and sustainable development, speaks at a news conference in Ottawa on April 24, 2018. File photo by Alex Tétreault
Previous story
Next story

Canada's federal environment and fisheries departments failed at monitoring waste dumps by mining companies and did not always check if these firms were carrying out plans to save fish from lethal chemicals, Canada's environment commissioner has found.

Julie Gelfand examined seven metal mine projects to figure out how Environment and Climate Change Canada (ECCC) and the Department of Fisheries and Oceans (DFO) were fulfilling their duties to oversee the safe disposal and storage of the liquid sludge that comes from industrial chemicals used in mining to extract materials from crushed rock.

The mining process creates a byproduct filled with harmful materials to fish like cyanide, zinc and selenium, which the industry calls "effluent." For diamond mines and metals like gold, copper, iron and nickel the industry is allowed to release some of this effluent into bodies of water, which become tailings ponds.

While Ottawa is keeping appropriate track of how the industry releases effluent into waterways, Gelfand found that nobody's responsible for fixing problems when they are discovered.

"When environmental effects were found, there was no requirement on anybody's part to actually have to do anything," said Gelfand. "Nobody actually seems to have to deal with the issue."

As of June 2018, 42 bodies of water across Canada were classified as locations where effluent may be stored, representing a major increase from 2006, when there were only five.

If those ponds leak into the surrounding area, they could release harmful waste that kills fish. That's what happened with the Mount Polley mine disaster in British Columbia in 2014, when a dam breached and a copper and gold mine tailings pond flooded into Polley Lake as well as nearby lakes and rivers.

A 2017 report from Environment Canada found three-quarters of mines that did studies on the environmental consequences of their operations found at least one impact. Half those mines found effects on fish and their habitat. All the effects were considered strong enough to be environmentally risky.

The same report stated about 75 per cent of the mines that checked found reduced biodiversity among bugs that fish eat. About half the mines looked at found impacts near the site and far afield.

From April 2014 to June 2018, mining companies were required by court to pay $16.6 million in penalties and as of last year were hit with 136 prosecutions resulting in 97 counts of convictions, where a subject is found guilty or pleaded guilty, Gelfand's report stated.

Gelfand's report says potash, coal and oilsands mines should be subject to more frequent inspections. She also said that while the department took steps to protect fish and their habitat, and those steps included enforcement action, the frequency of on-site inspections was lower in Ontario, Canada's mining capital, than in other regions, and reporting was "incomplete."

Environment Canada didn't have enough information for about one-third of Canada's metal mines to know what was happening. The department completed only two-thirds of its planned inspections for non-metals operations such as coal or oilsands mines.

"We found that ECCC reported only on data from effluent samples taken from the final discharge point of each site," she wrote.

"The department provided no information about spills and unauthorized effluent discharge other than from the final discharge point. As a result, the department’s reports lacked a complete picture of the mining sites’ effects on fish and their habitat."

Companies have to develop "compensation plans" to mitigate the loss of fish when they use water to dump waste. It's DFO's job to approve construction work on new tailings ponds and follow up with mining companies on whether they've implemented these fish compensation plans.

The commissioner found that DFO monitored only 60 per cent of these plans for the tailings ponds that used existing bodies of water, compared to 90 per cent of plans for new construction work.

"For the cases in which DFO did not conduct monitoring, it also did not review the mining companies’ reports or conduct site visits. As a result, the department did not always know whether the mining companies performed their planned actions to offset the loss of fish and their habitat," she wrote.

The government has accepted the audit's recommendations. ECCC has promised to develop options by next spring for how to clean up problems.

Meanwhile, DFO acknowledged its efforts to keep track of tailings ponds have fallen short and said it would beef up monitoring by next April.

I am at a loss to understand

I am at a loss to understand the reasoning of our Environment Wardens, the ECCC and DFO and other alphabet soups, when they use terms such as "monitoring" when they don't even visit the actual sites; "compensation plan" to "mitigate loss of fish" - how does one go about doing this? How are millions of dollars in fines, which will probably never be collected, supposed to undo the harm done to an entire water course affecting heaven only knows how many species of fish and plants not to mention humans consumption of these connected bodies of water. Am I the only reader who feels sick with the reasoning of these civil servants whose remuneration and costly decisions are defrayed with our taxes? Are they paid to destroy the planet?

Since Mount Polley, I've been

Since Mount Polley, I've been more aware of this issue as well as sour gas oil wells. It irks me that resource companies can just basically decide to dig and drill anywhere according to law and long standing convention and then walk away, so to speak, from toxic effluents. Surely, people living in those areas can be trained by the various federal and provincial ministries involved to do the inspections since they live nearby. This would be an excellent way to also divert people in these regions from having to rely on dubious resource industries for well paying work. As a former government employee, I know salaries and benefits are high enough to live a good life. Office towers in Ottawa and the provincial capitals need to reduce office workers - and that's what I was - in favour of on site technicians and scientists. It would help to solve more that one issue, including jobs for certain first nations populations who often still rely a great deal on the environment for their livelihood and have a real stake in the proper resolution of these damaging effluents as well as good, steady employment that aligns with their history in wilder and rural areas.