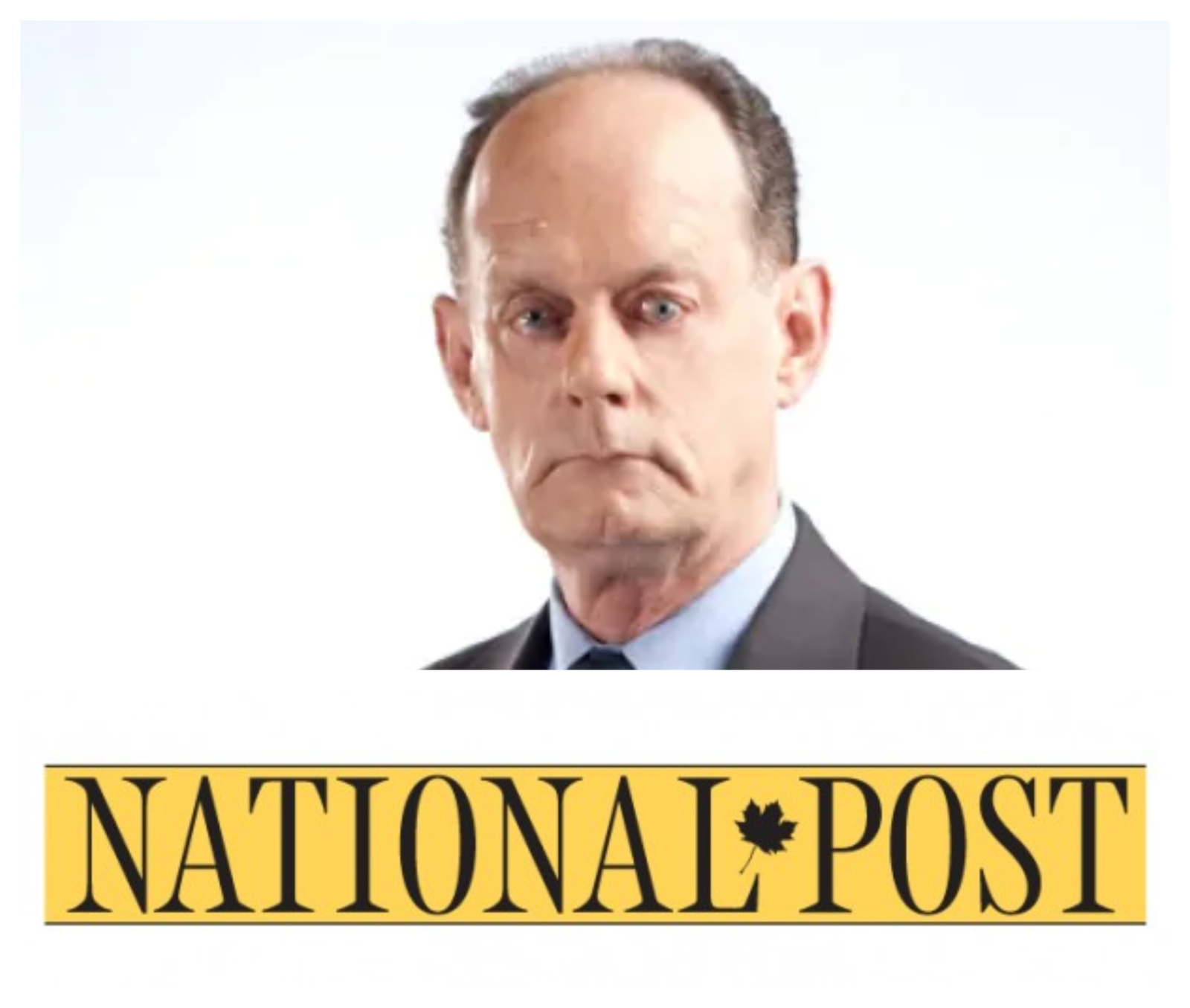 Can you believe it’s 2020 and Rex Murphy still has a platform to spout denialism on climate change — and on racism?

On May 15 in the National Post, Murphy responded to the federal government’s increased carbon tax by characterizing CO2 as the “Santa Claus of gases” and accusing the government of having an “obsession” with “so-called” carbon emissions.

On June 1, in the wake of global anti-racism protests and Infrastructure Minister Catherine McKenna’s supportive tweet, the National Post published another column in which Murphy declared, “Canada is not a racist country” and characterized the racism issue as an invention of the Liberals, a non-issue.

Move along, nothing to see here.

The rhetoric is so absurd, it is almost laughable — fodder for The Beaverton. Almost. To brush it aside is tempting, but dangerous.

Everyone is entitled to their opinion. But newspapers — especially mass media outlets — must stick to facts and be held accountable when they do not.

I doubt a single person reading this questions the reality and seriousness of climate change. Even the oil companies — like the ones Murphy has accepted speaking fees from — have long known that fossil fuels are causing CO2 levels to rise and it is a serious concern.

Sticking to the facts, 97 per cent of actively publishing climate scientists agree that humans are causing global warming. If the planet warms by the projected 3.2 C by 2100, it would leave large parts of the planet uninhabitable, jeopardizing the prospect of organized human life on Earth.

And let’s not overlook the fact that the effects of climate change will be borne disproportionately. Those who are poorest are most vulnerable. Within that group, women and children are expected to be hardest hit. Fishing communities, especially those in the tropics, stand to especially suffer for a multitude of reasons.

On the issue of racism in Canada, to deny that it is a pervasive issue is clearly not factual and beyond ignorant. Where do we even begin?

"It’s not about Rex Murphy. Nor is it about correcting his paleolithic views and lazy denialism. The issue is about platform and responsibility."

Should we point Murphy to federal government statistics showing that between 2005 and 2015, the number of Black Canadians in federal prisons increased by 77.5 per cent, Indigenous prisoners increased 52.4 per cent, and white prisoners decreased by 6.8 per cent? Or inform him that Black men in Toronto are 3.4 times more likely to be pulled over by police? Or point out that Canada is often not “tolerant and welcoming” to the extent that one in five Muslims across Canada reported they experienced discrimination due to their religion?

How can residential schools (the last of which closed only in 1996) be reconciled with the view that Canada is “not a racist country”? The residential school system was evil. Indigenous children were forcibly removed from their homes, subjected to depravity and abuse, and many never came home. We may never know how many died due to the practice of burying schoolchildren in unmarked graves.

Need Murphy be reminded of the fact the country still has an Indian Act? Or that Canada is breaking treaties, allowing corporations to define Indigenous rights, and is failing to provide clean water to First Nations across Canada?

No. Because it’s not about Murphy. Nor is it about correcting his paleolithic views and lazy denialism. The issue is about platform and responsibility.

To its credit, on June 2, the National Post published a response to Murphy by Financial Post business reporter, Vanmala Subramaniam. It is an eye-opening read.

But publishing Subramaniam’s column does not mean the National Post presented a fair and balanced representation of both sides of the story. (It should be mentioned that Financial Post is owned by the same company as National Post, Postmedia.)

To present these issues fairly, both sides must be grounded in reality. Murphy’s columns present factually incorrect arguments on issues that disproportionately affect minorities and marginalized people. To publish these pieces is to promote denialism on two of the greatest issues of our time. Denial is a form of misinformation and misinformation can harm people.

So what do we do about it?

To paraphrase Subramaniam, the least we can do “is call it out.” Let the National Post hear that it has a responsibility to stick to the facts.

I asked myself why should I be writing this op-ed? Do people really need another privileged white male voice weighing in? I posed these questions to eminent marine biologist and fishery scientist Daniel Pauly and his response was thoughtful and clear: “You are the right person to make an anti-racist argument because we (visible minorities) are fed up having to be the only ones to make it.”

Bravo
So we’ll said and glad you took the time to say it. I feel that a longtime columnist and public figure can sometimes achieve a “name” to the point where they gain a sheen of credibility that is undeserved. Up to the publications to attempt balance, although that’s sometimes an elusive target. Nothing personal, Rex.

I have already cancelled my

Murphy did a puff piece on

Murphy did a puff piece on Fort MacMurray when he hosted CBC's Cross Country Check-Up. Basically shilling for the oil industry. I see he hasn't changed his tune. Happily for Canadians, he's no longer doing the show.

Rex Murphy's entire career (perhaps it miight better be called a "schtick") has been based on his gadfly, contrarian stance. Over the years this stance has allowed him to issue outrage, and a variety of criticisms without having to propose constructive alternatives. It is a lazy form of journalism or punditry and despite his vocabulary and combative/trenchant pronouncements one suspects there is a paucity of true intellect behind the facade.

I have also been less than impressed by the career of David Frum another conservative apologist. I have, however been grudgingly forced to acknowledge the moderation and sense of his most recent reflections on the Trump "brand" of republicanism and the epic failure of the pitiful Rump of the GOP that claims to represent conservatism in the US. Unlike Murphy, Frum has matured and developed some reason, perspective and wisom as he ages.

When a commentator comments

When a commentator comments on science or academic research, they usually employ citations and references to back their views. Rex Murphy's sources, if he supplied any, will no doubt produce evidence of petrodollar and charlatan backing if you look deep enough.

Opinions are completely free to express in Canada within the bounds of the law. Opinions, even those without references or elementary skills in observation (e.g. Murphy on racism), can be entertaining when expressed in a writerly equivalent to a strutting peacock. But there is a word that magnificently captures the gestalt of self-centred, evidence-free contrarianism ...

It is not surprising that the

It is not surprising that the National Post publishes Rex in all his tin horn glory.

Not only is Canada still a

Not only is Canada still a racist country, it is populated by many racist individuals, a fact disturbingly demonstrated by many of the comments from readers of Ms. Subramaniam's National Post article.

One only has to look at Rex

One only has to look at Rex to see the effects of a life of mean spirited certainty..........Rex doesn't research, he opines......he doesn't think or reflect, he knows.

And without the stereotypical enemies of privileged old white men, I doubt he'd have anything to say. The wonder is, the CBC employed him to say it, for many years. Which perhaps says something about our national preference for agressive verbal style over content.

I think some media owners and

I think some media owners and publishers just like controversy because they think it may generate more income plain n simple. As for writers, the esteemed? not so esteemed? RM has had a long run based on his contrarian style (and maybe not a bad paycheque). I wonder if he even believes some of the stuff he puts out? Not journalism, just a hired gun.