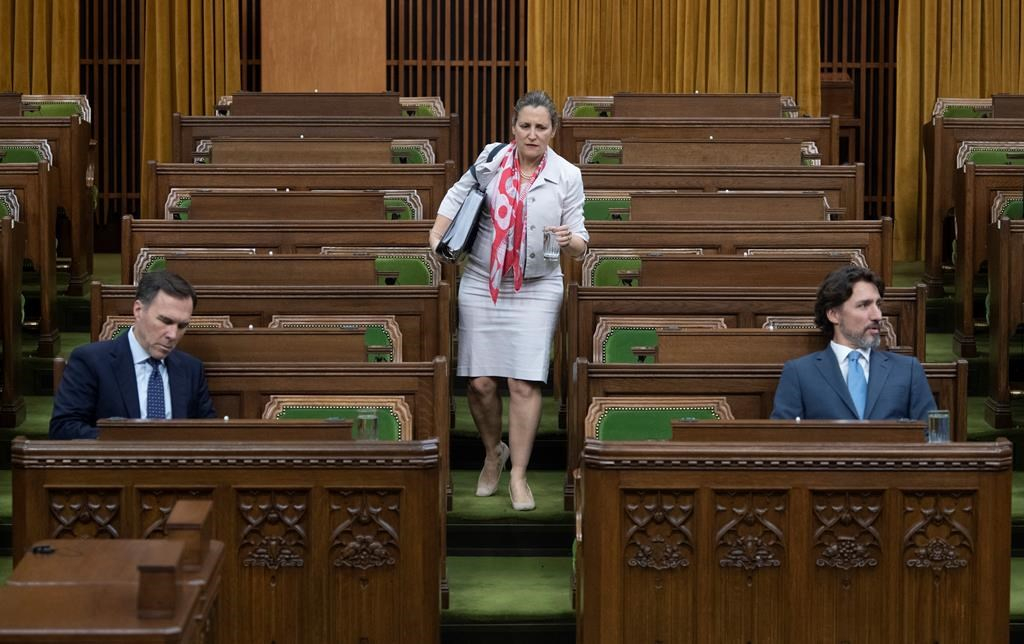 Chrystia Freeland looks for a seat as Bill Morneau and Justin Trudeau wait for a session of the Special Committee on the COVID-19 Pandemic to begin in the Chamber of the House of Commons in Ottawa, on May 13, 2020. File photo by The Canadian Press
Previous story
Next story

Prime Minister Justin Trudeau has shut down Parliament and is promising to come back with a new throne speech next month to reset his Liberal government's agenda in the wake of the COVID-19 pandemic.

Trudeau said Tuesday he had asked Gov. Gen. Julie Payette to prorogue Parliament, saying it will return Sept. 23. That is two days after the House of Commons was scheduled to resume sitting after reducing operations this spring.

The move will reset the legislative agenda, shutting down committees — along with their probes of the WE Charity controversy — and clearing away any unfinished work.

A long-term plan for recovery from the pandemic and economic crisis is needed, Trudeau said, promising a throne speech that will be a roadmap to rebuilding the economy and addressing societal inequities the pandemic and shutdown laid bare.

"This is our moment to change our future for the better. We can't afford to miss it, because this window of opportunity won't be open for long."

The throne speech delivered last December had no inkling that a pandemic would cause a global economic crisis, Trudeau added, saying a new one is needed to offer a long-term plan for rebuilding.

A new speech will also prompt a confidence vote, which will offer an opportunity for the Liberal minority to be given a mandate for their post-pandemic recovery plans, Trudeau said.

"We do not want an election, but it is obvious that the throne speech we gave eight months ago is no longer relevant for the reality that Canadians are living and that our government is facing," he said.

"That's what we will be laying out in our ambitious vision for this country in the throne speech and I think it's important that Parliament gets a chance to weigh in on it."

Trudeau added that he "absolutely" plans to fight the next election as Liberal leader.

Prime Minister Justin Trudeau has shut down Parliament and is promising to come back with a new throne speech next month to reset his Liberal government's agenda in the wake of the COVID-19 pandemic.

The prorogation came less than 24 hours after Bill Morneau announced his resignation as finance minister and as Liberal MP for Toronto Centre in a hastily called press conference Monday evening.

Deputy Prime Minister Chrystia Freeland was appointed to replace him as finance minister in a mini-cabinet shuffle Tuesday at Rideau Hall. She is the first woman named to the high-profile post.

Freeland will continue serving as deputy prime minister in addition to taking on finance, but New Brunswick MP Dominic LeBlanc will take over from her in the intergovernmental affairs portfolio — a job he held previously but had to relinquish to go through treatment for cancer. LeBlanc also remains as president of the Queen's Privy Council for Canada.

As minister of finance, Freeland will help shepherd the government through the biggest economic recovery since the Great Depression, with an expected deficit of $343.2 billion. The government has not yet tabled a 2020 budget, because plans to do so in March were upended by the pandemic.

A fall economic statement or a budget is now being promised for this fall.

Freeland told reporters Canada's restart needs to be green, as well as equitable, inclusive and focused on jobs and growth.

"I'm absolutely confident that working together, we can get through this and we can build back a country even better than the one we had before the pandemic hit us," she said.

Earlier Tuesday, Conservative finance critic Pierre Poilievre said Morneau is taking the fall for a government mired in controversy and called for Trudeau to resign.

He sidestepped questions about whether the Tories would try to trigger an election in the fall, saying they want to uncover the full story of the WE controversy so Canadians know all the details before they go to the polls again.

A heated controversy has been simmering for months over the Liberal government's decision to select WE Charity to administer the multimillion-dollar Canada Student Service Grant. WE backed out of the deal in early July, citing the controversy.

Both Morneau and Trudeau are facing investigations by the federal ethics commissioner for not recusing themselves in the WE Charity deal, given their close family ties to the organization. They have apologized.

Morneau compounded the controversy by revealing WE Charity had paid over $41,000 in expenses for family trips to see its humanitarian projects in Ecuador and Kenya in 2017. Morneau repaid the charity just hours before disclosing the trips during testimony before a Commons committee last month.

Bloc Quebecois Leader Yves-Francois Blanchet last week said he would bring a non-confidence vote himself if Trudeau, Morneau and Trudeau's chief of staff Katie Telford do not all resign. He said Tuesday a throne speech could just make doing so easier, though he also left the door open to supporting it.

The New Democrats have been using their position in the minority Parliament to help Trudeau's Liberals pass emergency aid legislation, while negotiating changes. The NDP are now asking for a $12-billion investment in child care, including an immediate $2 billion investment so parents — particularly mothers — can go back to work.

NDP Leader Jagmeet Singh says this will remain the NDP's focus — for now.

"If the Liberal government continues to focus on helping their close friends instead of helping people ... then we'll have to look at all options," he said Tuesday in Vancouver.

Meanwhile, the Liberals are releasing thousands of pages of documents related to the WE affair that were turned over to the House of Commons finance committee over a week ago but were being vetted for personal information and cabinet secrets.

That committee had demanded the documents as part of its investigation into the WE Charity deal, which is now being shut down due to prorogation.

—With files from Mia Rabson and Joan Bryden.

...not too sure why any sane

...not too sure why any sane Canadian would believe that a bunch more words is going to make any difference! Methinks I know which throne Justin is speaking from...