There’s no more colourful display of the miracle of life than to slip on a snorkelling mask and dip your face into the warm water above a tropical reef. You’re tempted to lift your head back to the silver surface just to repeat the experience of dropping in on Mother Nature’s acid trip.

We are such land-bound animals that most of us don’t give enough thought to the sea. But the oceans have absorbed 90 per cent of the heat we’ve generated by spewing fossil carbon into the sky. And they’re paying the price.

The oceans are getting hotter, acidifying, and suffering prolonged heat waves. You have probably heard about mass bleaching events, most famously on the Great Barrier Reef, when marine heat waves kill off coral.

Just like on land, heat waves in the sea are ever more intense and frequent. And they can spread across truly vast areas. One marine heat wave in 2015-16 caused mass bleaching of corals across the Pacific, Atlantic and Indian oceans.

This week, scientists warned that a world without coral reefs is closer than we’d realized.

"At 1.5 C of warming, which the world is predicted to reach in the early 2030s without drastic action to limit greenhouse gas emissions, 99 per cent of the world’s reefs will experience heat waves that are too frequent for them to recover."

That 99 per cent is not a typo. And wealthy scuba tourists are not the concern. A billion people in the global tropics rely on reefs for food and livelihoods. One of the great unknowns about climate breakdown is how people and societies will react under sustained stress. And food is surely one of the biggest worries. You can model energy systems much more easily than bread riots or desperation.

Australia’s response encapsulates so much about our global dithering over climate change. The Great Barrier Reef is at risk of losing its designation as a World Heritage Site after mass bleaching catastrophes in 2016, 2017 and 2020. So, the Australian government announced it will increase its funding for conservation projects that might serve as refuges from the heat.

The government says there’s nothing it can do about the heat itself because that’s a “global” problem, even as Australia enthusiastically ramps up coal and gas extraction.

Terry Hughes is one of the world’s top reef scientists. A past director of Australia’s ARC Centre of Excellence for Coral Reef Studies, his first-hand experience documenting mass bleaching has driven him to public advocacy.

“The future is here now,” he says. “Instead of relying on a dwindling number of refuges, the world needs to urgently address the root cause of the problem. Pollution from greenhouse gases.”

Canada’s Olympians are cloaked in coal-fired garb this year. Lululemon won the contract to outfit our athletes and now there’s a campaign pressuring the yoga wear company to switch away from coal-burning factories.

Activists in Vancouver presented @lululemon with a coal metal for their lack of climate leadership #lulucoal #Beijing2022 pic.twitter.com/luGfKLiRGN

“Muhannad Malas, senior climate campaigner with the Fossil Free Fashion Campaign at Stand.earth, points to an analysis from the group showing 48 per cent of the energy used to power Lululemon factories in Asia comes from coal.”

In related news, a team led by researchers at the University of Waterloo found just one of the 21 cities that have hosted the Winter Olympics would be able to host snow sports by the end of the century, unless climate pollution is cut dramatically.

Quebec introduces a law against oil and gas extraction

You’ll remember that Quebec was one of the governments that joined the Beyond Oil and Gas Alliance at COP26. This week, the provincial government tabled its law to “forbid” fossil extraction.

The law would "put an end to the search for hydrocarbons or underground reservoirs, the production of hydrocarbons — oil and gas — and the exploitation of brine."

BREAKING After years of local organizing against #fossil projects, Quebec Energy Minister @JJulienCAQ tables a Bill relegating fossil exploration & extraction to the past💥

A historic development - but taxpayers shouldn’t be the ones to foot the bill🧵 #cdnpoli #polqc #BOGA 1/ pic.twitter.com/ZsLhtlfNv1

Climate advocates are pushing the province to follow the polluter-pay principle. This first draft of the law sets aside $100 million to compensate companies for expenses since 2015 and to cover three-quarters of the cost of closing and cleaning up well sites.

Lots of interesting findings in the latest poll conducted by Abacus for Clean Energy Canada. Abacus’ David Coletto writes: “For every person who thinks oil and gas will be very important for Canada’s economy in 10 years, twice as many feel that way about clean energy.”

Even more striking is the speed public opinion is changing. “In just 14 months, the number of Canadians who said the clean energy sector would be very important in 10 years shot up 19 points,” says Trevor Melanson from Clean Energy Canada. 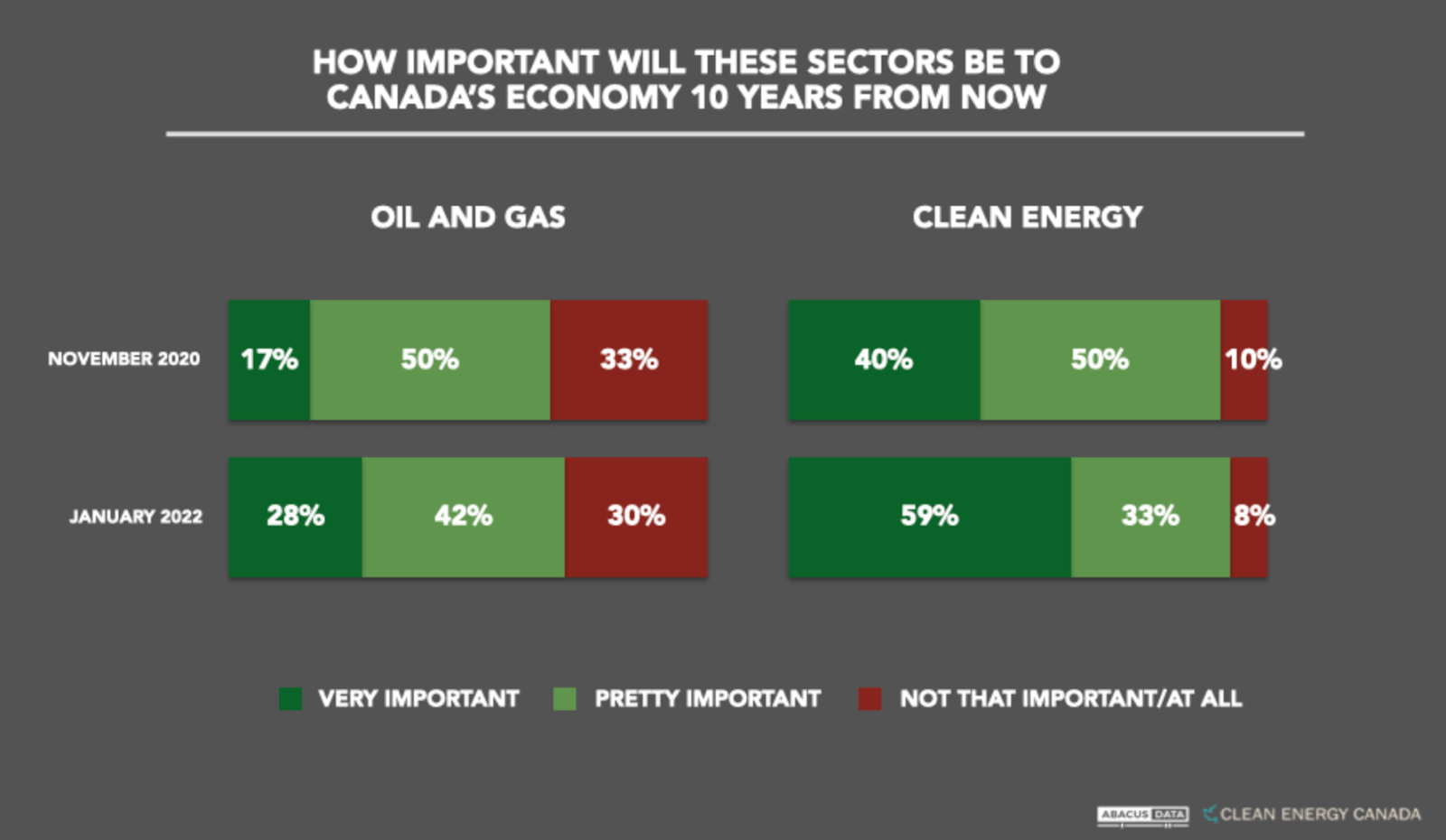 Remember the “Allan Inquiry” into foreign funding of environmental groups that found no wrongdoing? Well, many Canadians heard precisely the opposite because Jason Kenney launched an immediate campaign to spin the findings, shamelessly lying about the inquiry’s conclusions.

Now, five organizations are suing the premier and the Alberta government for defamation.

“All we asked for was a correction and an apology, but Premier Kenney refuses to retract the false statements he made and apologize for lying about the results of the … inquiry,” said Tim Gray, executive director of Environmental Defence. “In a democracy like Canada, a high-ranking government official should be held accountable for attempting to publicly alter the results of a public inquiry and for using his office to condemn and defame those he doesn’t agree with.”

I should pause here to disclose that my wife, Tzeporah Berman, is one of the plaintiffs. As part of the campaign against climate advocates, Kenney held a press conference featuring a poster of Tzeporah’s face covered with a red circle and slash. I’ll leave to your imagination the violent, sexist, anti-Semitic attacks she received.

Dan Woynillowicz weighed in on the federal carbon capture controversy, making the sensible point that if the feds are serious about reducing emissions from the oil and gas industry, they shouldn’t give away the carrot (tax credits for carbon capture) before cementing a plan for the stick (a cap and reduction program for the industry).

“It’s clear the stick and carrot ought to be a package deal,” Dan writes.

Nova Scotia’s Progressive Conservative premier has “scuttled a bid by the province's private electric utility to charge fees to customers who sell renewable power back to the electricity grid.”

Nova Scotia Power was hoping to charge $8 per kilowatt of electricity, amounting to roughly $960 a year for an average rooftop solar system.

In quashing the plan, Premier Tim Houston said his government "will support the greening of the grid, not discourage it."

“Dr. Marissa Lem, a family doctor and director of the Park Prescriptions, said patients are handed a written “prescription for nature” outlining their treatment plan, like spending two hours a week outside, at least 20 minutes each time, to benefit from green time.” 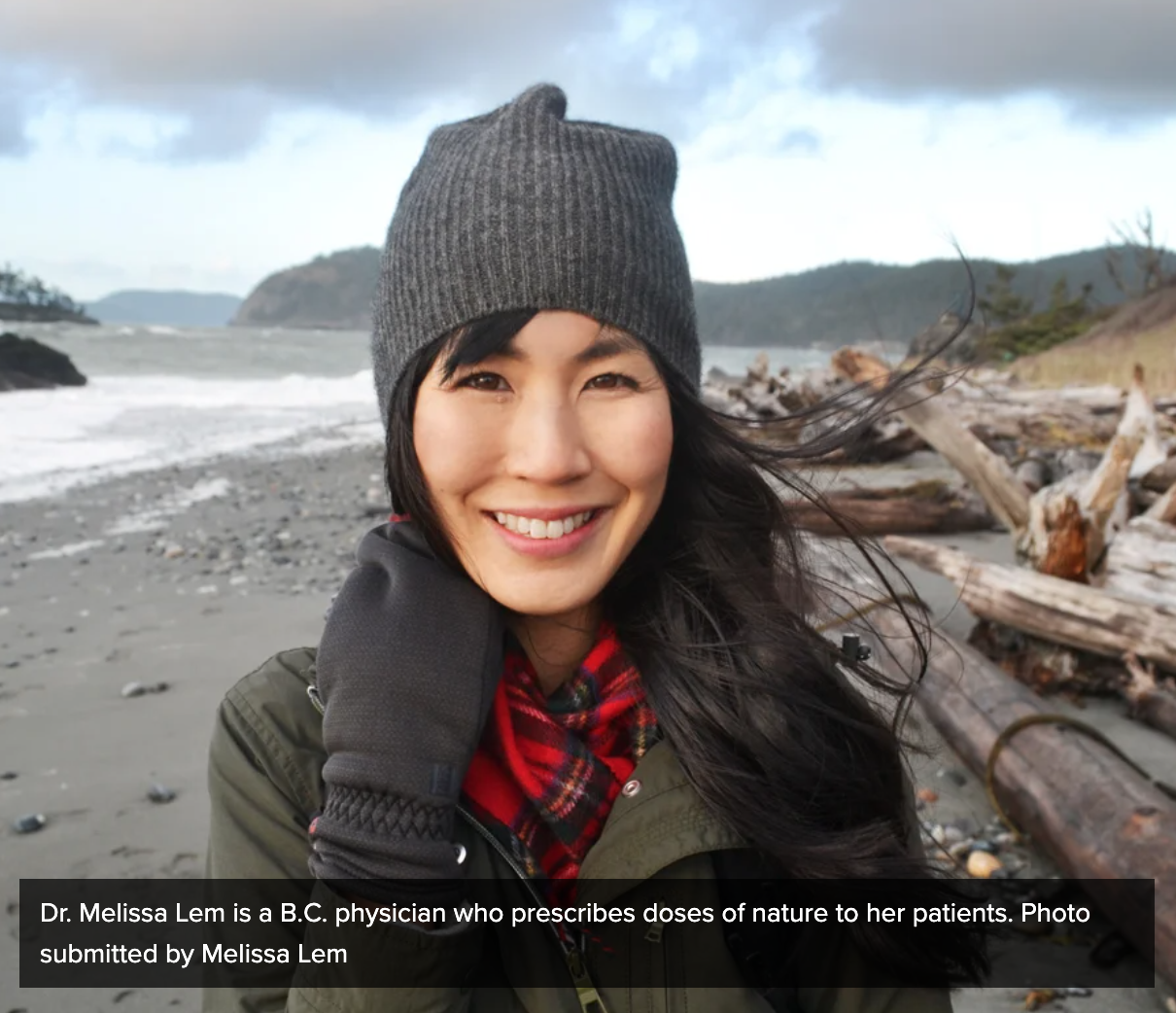 I’ll leave you this week with a recommendation for John Woodside’s piece about a too-little-known Canadian champion of climate science, Jim Bruce: 93-year-old father of Canadian climate science reflects on the most consequential events of his career.

“Now 93, Bruce is reflecting on a career packed with lessons for the era of climate change. From how to build international agreements that work, to protecting our communities from floods, Canada’s National Observer sat down with Bruce to hear what it will take to pull human society out of its death spiral.”

The study’s authors in The Conversation: Safe havens for coral reefs will be almost non-existent at 1.5 C of global warming — new study

Canada’s National Observer: Stand.earth calls for Lululemon — maker of Team Canada gear — to get coal out of its supply chain as Winter Olympics begin

Quebec introduces a law against oil and gas extraction

Canadian Press/CTV: Quebec puts aside $100M for oil companies banned from drilling, though they want $500M

Canada’s National Observer: Should taxpayers be forced to foot the bill for oil and gas sector’s carbon capture plans?

PaRx, A Prescription for Nature

And check out this earlier article:

Canada’s National Observer: Take two hikes and call me in the morning