The original campaign for “ethical oil” emerged from Ezra Levant at Rebel Media. It carried a stench many sympathizers couldn’t stomach and the branding never got full traction.

On the global stage, the campaign is back in force, repurposed as “displacing” Vladimir Putin’s “dictator oil.” This newest branding has the great — and dangerous — benefit of sounding like obvious common sense.

The oil and gas industry must be hoping we ignore its enthusiastic entanglement with authoritarian regimes. The fossil and finance industries have funded and partnered with Russian oil and gas and are equally bullish on China. The outrage over suffering in Ukraine has finally forced most western oil companies to cut ties with Russia, but even this week, Calgary-based oil company Calfrac revealed it is staying in Russia where it “provide(s) services to Russia’s largest oil producer.”

But there’s an even bigger entanglement with dictators — the oil market is global, the price of oil is global and it’s absolutely dominated by authoritarian regimes. We might be buying gas in Canada, but we are supporting that global price.

When Putin invaded Ukraine, the price at gas pumps skyrocketed. It happened at pumps in Alberta, where the “safe, secure” oil is just kilometres away. It happened in Vancouver, where “democratic” oil is piped over the Rockies through the Trans Mountain pipeline. Wherever the molecules actually come from, oil companies all over the world are banking massive profits and so are the world’s most odious regimes.

To show how nasty a business it is, Barry Saxifrage put together one of his classic charts. 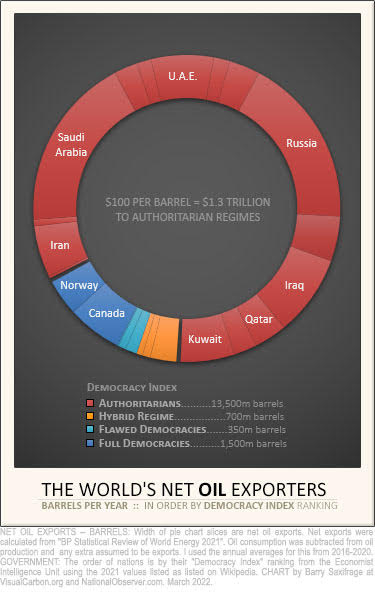 The chart shows the world’s big oil exporters and how democratic they are. And it shows just how delusional it is to talk about “displacing dictator oil” at any meaningful scale — over 80 per cent of the exports sloshing around the world benefit authoritarian regimes.

The obvious, common sense way out of this global market is the same path as the one to climate sanity — not doubling down on oil extraction but breaking our dependence on it.

The oil shocks and emergency in Ukraine have caused a seismic rethink about what’s possible. On Friday, the International Energy Agency even stepped into that most taboo of topics: using less oil.

It’s telling, isn’t it, that you never hear this obvious suggestion from the voices thundering about “displacing dictator oil”? Whether the crisis is a pandemic or an invasion, whether oil prices are too low or prices are soaring, the answer, somehow, is always the same: “The world needs more Canadian oil.”

If we are serious about providing urgent relief from Russia’s stranglehold over European energy, we could immediately make enormous cuts — freeing up the equivalent to all the oil burned in all the cars in China. It wouldn’t even be that difficult. The IEA’s 10-point plan for advanced economies includes steps like lowering highway speeds, reducing fares for public transit, car-free Sundays, flying less, boosting “micro-mobility,” and speeding up the adoption of EVs.

Those steps would lead us on a path “to put oil demand into structural decline in the medium term.”

And, “on track for a decline in oil demand consistent with what is required to reach net-zero emissions by 2050.”

I usually like to end this newsletter with a suggestion for something particularly good on the topic at hand. This week, I’ll point you to Bill McKibben’s latest tour de force, In a World on Fire, Stop Burning Things.

“What unites these two crises is combustion,” McKibben writes. “Fossil fuel has been the dominant factor on the planet for centuries, and so far nothing has been able to profoundly alter that.”

But McKibben demonstrates that we now have many of the technologies we need to stop the destruction of lives and planet. And certainly all the tools we need to get a very long way down the road to zero carbon. What we need is a clear reframing of the task at hand.

From COVID to Russia to climate, our politics and the possibility for collective action is being kneecapped by strategically designed disinformation operations.

This week, Canada’s National Observer exposed how right-wing political operatives are using fake citizens’ groups to mess with local politics. Many of the groups are linked to Canada Proud, founded by Jeff Ballingall, a director on Erin O’Toole’s Conservative leadership campaign and a leading force behind Doug Ford’s election in 2018.

reasingly clear that Russia has been at war with the West for many years running psyops through disinformation campaigns. Russia’s “digital brigades have been busy at work here in Canada as well,” boosting the recent trucker convoys and sowing mayhem.

Disinformation feeds interlocking conspiracies. Check out this remarkable finding from Frank Graves, who’s been tracking the rise of “authoritarian populism” in Canada.

Shared via PowerPoint on Android. pic.twitter.com/ZlA8PCeRT8

SwissRe, the world’s largest reinsurance company, has decided to rule out support for new oil and gas projects. The company’s new policy also applies to “downstream” companies like refineries and gas utilities that can’t prove their business is tracking towards net-zero.

BREAKING NEWS: @SwissRe, one of the world’s ultimate risk managers, brings new momentum to the insurance industry’s shift away from fossil fuels with a new oil and gas policy today. A quick 🧵 on the breakthroughs, the gaps and the steps which other insurers now need to take. pic.twitter.com/XEWZD5MkUP

Of all the things to come out of Ukraine at the moment, you wouldn’t expect major news about electricity transmission interties. But nonetheless:

I do not think most people understand what a massive, meaningful achievement this is in a very, very short time. Amazing. https://t.co/Or36WtFjqs

This is a major problem in Canada. We can’t seem to get it together to build interties between neighbouring provinces, and the city of Saint John can’t even tie into the New Brunswick grid.

So frustrating to see @NB_Power resistance to @SJENERGY efforts to bring wind onto the system as @cbcjones shows. With a federal clean electricity standard from @s_guilbeault on its way, @cc_nb would prefer a better attitude. https://t.co/YEj3K95DPd

Speaking of electricity grids, you’ve got until April 15 to weigh in on the proposed nationwide Clean Electricity Standard, one of the Liberals’ campaign promises. The standard is aimed at requiring a net-zero electricity grid by 2035.

Electricity is the one area where Canada has made progress against climate pollution. Since Ontario shut down its coal plants, the grid is now about 80 per cent non-emitting. Coal is being phased out quickly across the Prairie provinces and, haltingly, in Atlantic Canada but much of it is being replaced with fossil gas plants. The Doug Ford government in Ontario has already bought several gas plants and is looking to use more gas to replace renewable energy projects it scrapped after taking office.

Jason Kenney is fighting a defamation lawsuit brought by environmental groups by doubling down on his false claims about the inquiry into foreign funding. That inquiry found no “suggestion of wrongdoing on the part of any individual or organization.”

“The irony of this whole conversation is that the foreign money involved in the conversations about what we should do on climate change or not is, of course, dominated by oil money, most of which is foreign,” said Tim Gray, executive director of Environmental Defence.

Last summer’s heat dome scorched not just Western Canada but also Oregon and Washington state. So, why was B.C.’s death toll so much higher? And why did low-income and other vulnerable groups die at such higher rates?

The short answer seems to be that there is little preparation or planning for extreme heat events and emergency responders were underfunded and understaffed. But this longer dive by The Tyee’s Jen St. Denis is well worth your time: Inside June’s Deadly Heat Dome. And Surviving the Next One

Temperatures have gone crazy at both poles. Parts of Antarctica were almost 40 degrees Celsius above average this week. Meanwhile, the North Pole is still in its “polar night” of darkness but temperatures were 28 degrees above normal. 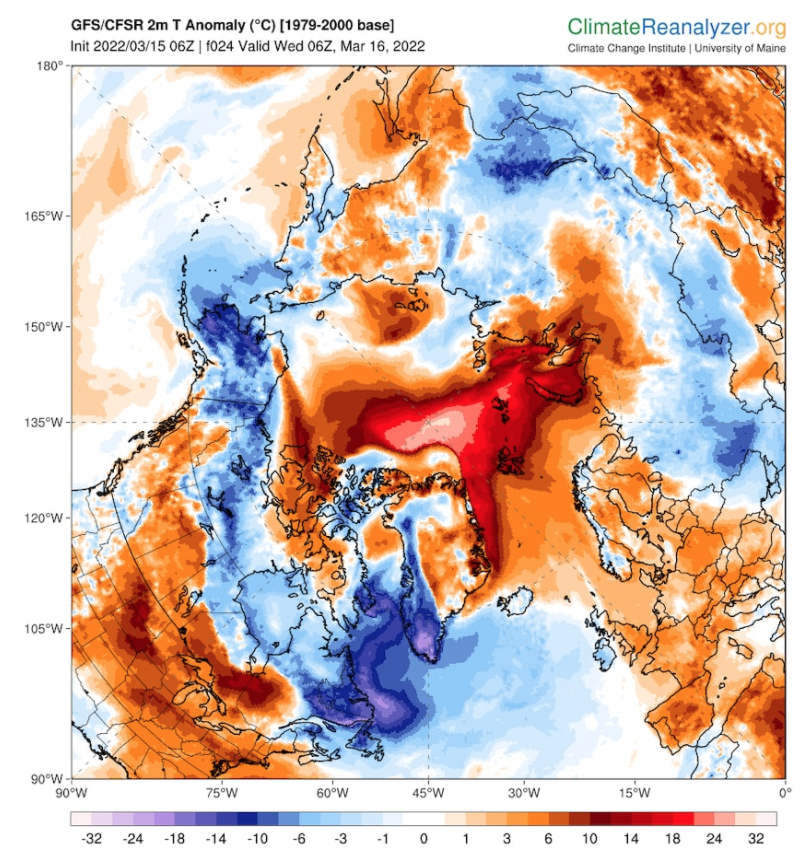 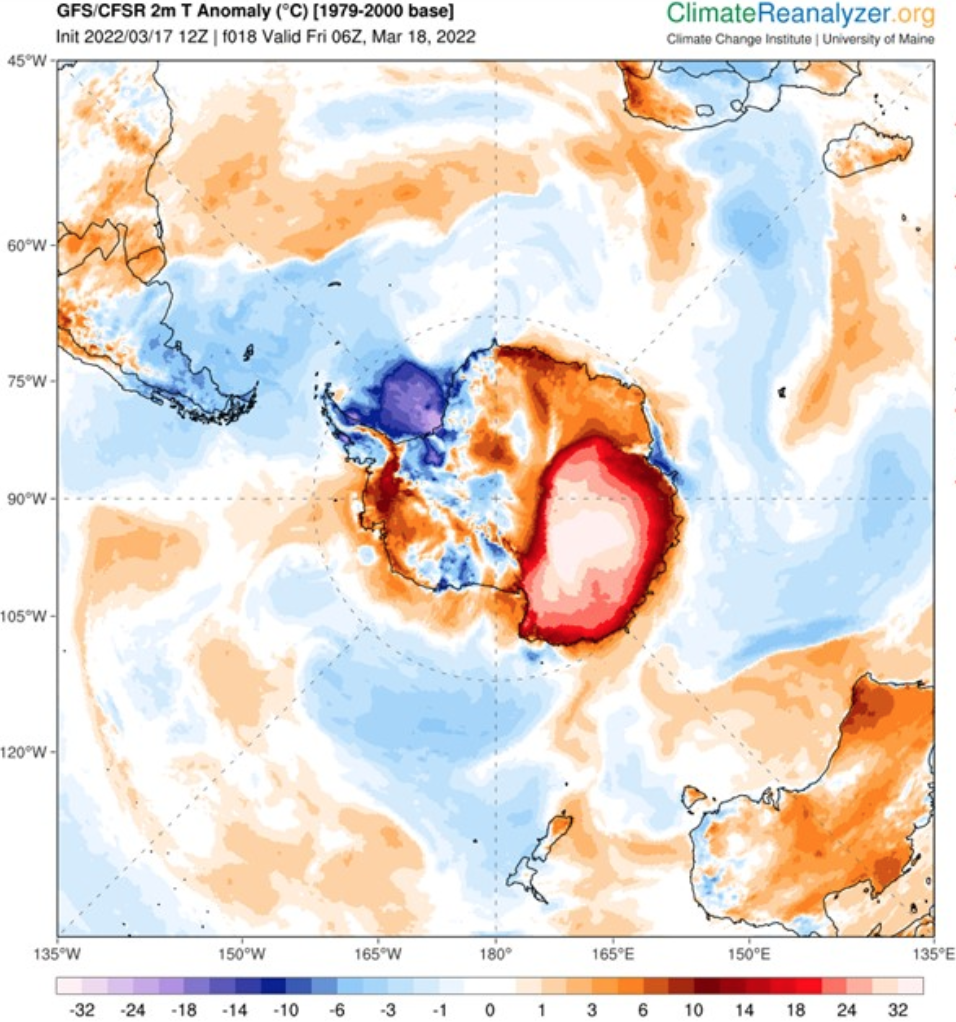 Canada’s economy will survive a breakup with fossil fuels

Canada’s banks are heavily tied to fossil fuels — they have pumped hundreds of billions into oil, gas and coal since the Paris Agreement. Can they extricate themselves and align their banking with climate sanity?

You may not know finance whiz Mark Campanale, but you surely know about the work he’s catalyzed. His organization, Carbon Tracker, injected the concept of “stranded assets” into the minds of financial managers and catalyzed the divestment movement. Campanale spoke with John Woodside this week:

Galvanized by Russia’s invasion of Ukraine, the U.K. is set to release its British Energy Security Strategy to cut gas demand and boost renewable power. Prime Minister Boris Johnson, who was not so very long ago a serious skeptic of wind and solar power, wrote in The Telegraph:

“We need permanently to reduce the cost of energy at source — and that will only happen if our supply is more secure, more sustainable and less vulnerable to manipulation by others. Renewables are the quickest and cheapest route to greater energy independence.”

The U.K. is already deploying offshore wind much faster than industry expected, with over 14 gigawatts in place. In January alone, about 25 gigawatts worth of projects — more than double predictions — were awarded in a single Scottish auction. The previous plan was to expand to 40 gigawatts by 2030.

The German love of cars tends more towards the smooth power of Autobahn rockets than big pickups but it’s deeply ingrained and Germany’s auto industry is extremely powerful. The German government had been holding back European efforts to ban fossil-fuelled cars but it is now dropping its insistence on exemptions and supporting a phase-out date of 2035. German Environment Minister Steffi Lemke told POLITICO:

“That means new passenger cars and light commercial vehicles [with] internal combustion engines will no longer be allowed after 2035.”

Hollywood stars ready to cash out of RBC over Coastal GasLink

Mark Ruffalo, Taika Waititi, Ava DuVernay and Julianne Moore are some of the Hollywood stars campaigning against RBC over the Coastal GasLink pipeline. RBC owns City National, the “Bank to the Stars.” Cloe Logan reports:

“At an online press conference, Gidimt’en Checkpoint spokesperson Sleydo’ spoke about the ‘reoccupation’ she and others have been undertaking for the past few years on Wet’suwet’en territory in an effort to stop pipeline construction, which has been met with militarized police raids and numerous arrests. The event was moderated by Melina Laboucan-Massimo, senior director of Indigenous Climate Action.”

Following protests by Climate Action Carleton, the university’s board of governors announced it has agreed to divest its endowment and operating funds from fossil fuels.

McGill students are heading into the second week of #OccupyMcGill, taking over buildings and outdoor intersections. The students are organizing under the banner of Divest McGill, demanding the administration “divest from the fossil fuel industry and be a leader in climate justice.”

One final, quirky climate story: The dating app OkCupid found that: “Opinions surrounding climate change are the biggest ‘dealbreaker’ out of several topics when it comes to finding a match.”

Ninety per cent of daters say that it’s important for their match to care about climate change. “People feel that with climate change, it says so much more about you,” OkCupid’s Jane Reynolds told The Hill.

Globe and Mail: The Christchurch massacre may have had a Canadian connection – but there’s a reason you may not know about it

Canada’s National Observer: We're in a disinformation war with Russia. So far, they're winning

Canada’s economy will survive a breakup with fossil fuels

Hollywood stars ready to cash out of RBC over Coastal GasLink