Canadians are extremely enthusiastic about renewable energy, and public opinion is clearly moving towards a clean energy vision for the future. But when you look underneath the latest polls, there are still some major obstacles to aggressive climate action.

You’ve probably heard that most Canadians want governments to do more on climate. That’s what two-thirds of the public tell pollsters when they’re asked. But flip the question around, and the same two-thirds will tell you they’re pretty satisfied and think Canada is doing a decent job dealing with climate change. (You can find these results, and much more, in this new layperson’s guide I helped write.)

It’s not because Canadians aren’t worried. Three-quarters of the public are concerned and the level of worry is rising — half of us now describe climate change as a “very serious threat.”

But most people think we’re already pulling our weight. Just 25 per cent of Canadians think we’re doing less than our “fair share.” 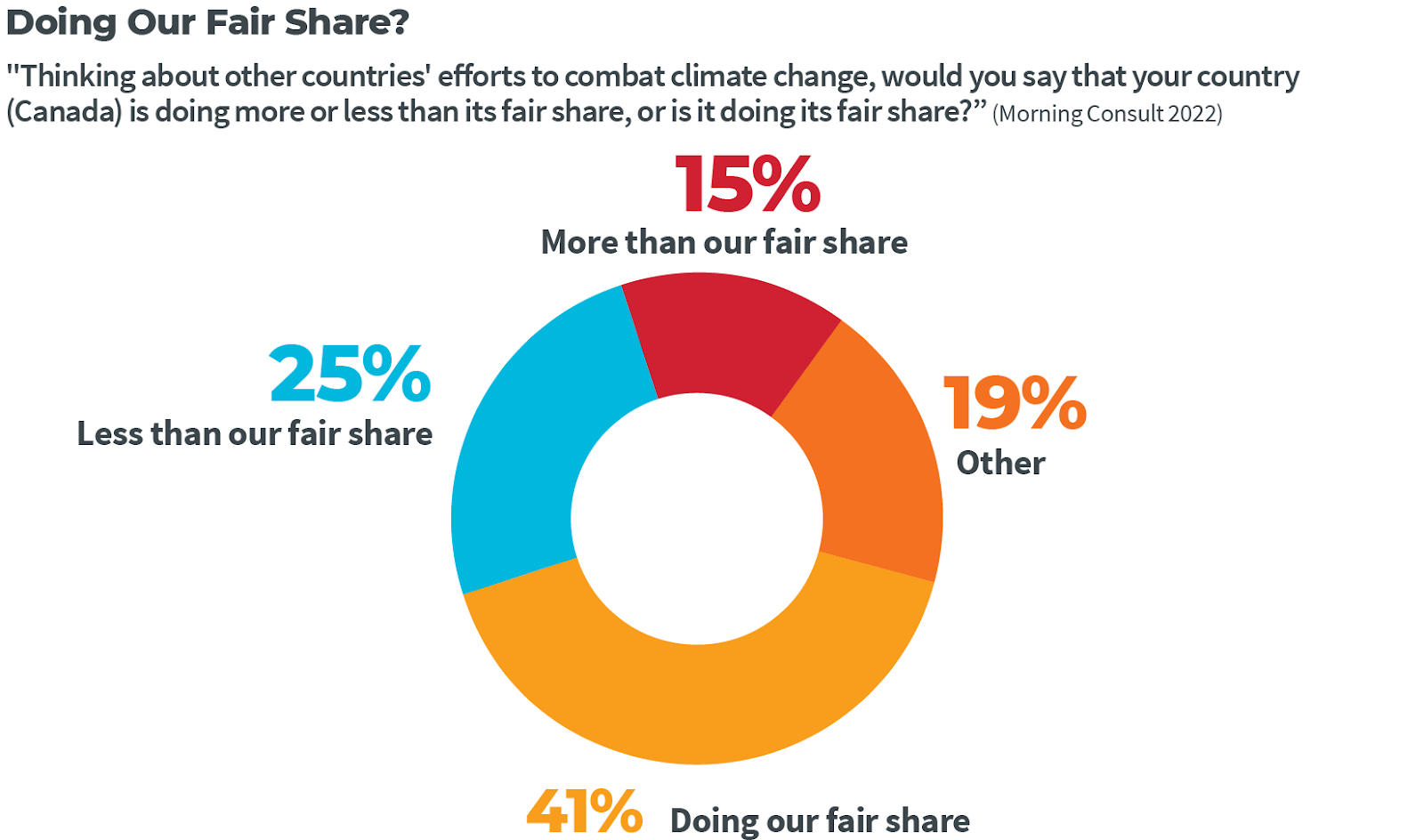 Clearly, a lot more needs to be done to help Canadians connect the dots between our self-perception and our climate pollution. And I hope you’ll take the opportunity to donate to our crowdfunding campaign and help Canada’s National Observer drive the climate conversation forward. Because Canada’s actual contribution to the climate crisis looks more like this: 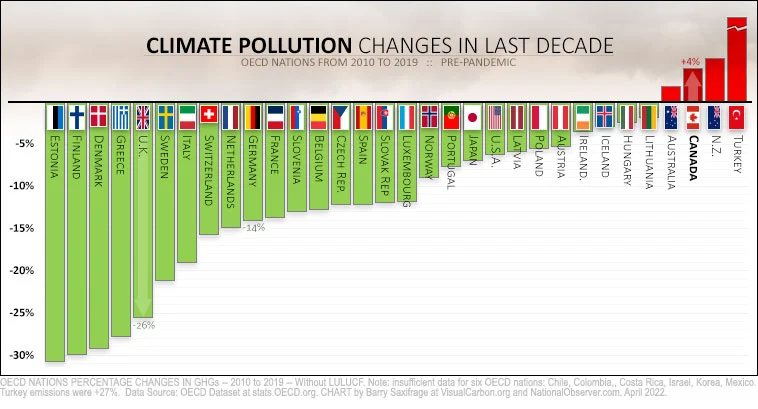 One of the really worrying trends in public opinion is the number of people who think tackling climate change is already a lost cause. About half the public think we won’t be able to limit climate impacts “before it’s too late.” Just 35 per cent have confidence in governments creating policies to reduce greenhouse gas emissions.

Given our track record so far, it’s not crazy to feel that way. But it risks becoming a self-fulfilling prophecy, especially when so many people doubt the effectiveness of actions and policies that have been proven to work — just look at all that green in the chart above.

Part of the problem is the whole idea of “too late.” Every fraction of every degree matters, especially for those who have caused the least climate damage but are most in danger.

And another big obstacle is that most of the public doesn’t yet have a mental picture of the possible pathways forward. But there is good news in the latest public research. Canadians’ vision of the future is shifting rapidly.

There is massive support for renewable energy, across all demographics and across party lines. Over 90 per cent of us now understand that clean energy will be important for our future and there has been a 20-point shift on that question, even during the pandemic.

Meanwhile, support for fossil fuel expansion is eroding. Conservative voters are still supportive, but everyone else has lost their appetite — just one-third of Liberals want expansion and the numbers are even lower for supporters of the other parties.

“Among non-Conservative past voters, there is little enthusiasm for any form of energy production beyond wind and solar,” the Angus Reid Institute said, summarizing its findings from 2021.

Last week, we looked at the latest IPCC report, which hammered home the importance of electrifying everything possible with renewables and clean electricity — buses and cars and trucks and buildings and factories, almost all of them can be electrified today.

There’s still a lot of work ahead to paint that picture more clearly in the public mind, but the latest opinion research all points in the same direction: the picture is coming into focus.

“Quebec became the first jurisdiction in the world Tuesday to explicitly ban oil and gas development in its territory after decades of campaigning by environmental organizations and citizen groups,” reports Natasha Bulowski.

Great reporting by @NBulowski on the history of local organizing behind Quebec's new law banning fossil extraction and exploration.

Spoiler: despite what many people on this platform seem to think, there are actually oil and gas reserves in Quebec😉https://t.co/nAPVatRwc9

The new law ends exploration and production as well as any public financing of those activities in Quebec. The province joined the Beyond Oil and Gas Alliance at COP26 last year — a group of countries led by Denmark and Costa Rica that have committed to end fossil fuel production. Subnational governments like California and Quebec have also joined.

Canada’s big banks landed on the venerable salmon-pink pages of the Financial Times this week.

"Canada’s top banks more than doubled their financing of highly polluting tar sands oil to $16.8bn in 2021, despite signing up to the UN’s net zero banking alliance on greenhouse gas emissions.” @CamillaHodgsonhttps://t.co/wB98lUmGvF pic.twitter.com/zTD73OQwke

Over 300 people have been killed by raging floods in and around Durban, South Africa. Search and rescue is ongoing, but it’s already the country’s deadliest storm and heaviest rain on record.

Meanwhile, Chile is in the 13th year of drought and has begun rationing water in the capital of Santiago.

In East Africa, 12.2 million people are in need of urgent food aid. The number may rise to 29 million as crops fail for the fourth consecutive year.

”While abandoned and orphaned wells are often thought of as an Alberta issue, Ontario has nearly as many as Canada’s oil and gas powerhouse province — and they are far older,” reports Jessica McDiarmid.

“Sixty-eight families still can’t go home and 36 businesses, already battered by the pandemic, are still shuttered. The 3,000 people who live in the community an hour’s drive southeast of Windsor no longer have a post office, a grocery store, a doctor’s or a lawyer’s office.”

California to phase out gas-powered cars by 2035

The world’s fifth-largest economy just unveiled its new rules for electrifying passenger vehicles. Funnily enough, it’s pretty much the same series of mandates and dates Canada’s federal government has planned, rising to 100 per cent by 2035. That should make it much easier for the Canadian government to resist industry lobbying.

When the Paris Agreement was signed, there were about a million EVs in the world. This year, we’ll be adding that many every month. Bloomberg’s Colin McKerracher figures the world will exceed 20 million on the road by June and 26 million by the end of the year: “China and Europe are driving most of the adoption, with North America a distant third source of sales.”

Clean Energy Canada crunched the numbers recently and found that it’s already cheaper to have an EV than a gas-burner.

And about to get much cheaper (assuming OEMs pass along costs saving from lower cost batteries).

$1 trillion for new oil and gas

"The industry is substantially responsible for bringing us to the brink of disaster, following decades of climate denial, lobbying against action and pushing for continued government support. Now, as the window for action is closing, they continue to look for growth. It is past time governments cut them off,” said Lorne Stockman from Oil Change International, one of the organizations that ran the numbers.

The Italian government has been giving tax credits worth 110 per cent of the cost of installing heat pumps, solar panels and better insulation.

“The EU said we need to become a zero-emission society by 2050, and to do that, the entire property stock, private or public, needs to be restructured,” parliamentarian Riccardo Fraccaro, who championed the superbonus program, told The Guardian.

Researchers studying indoor air pollution are switching to electric stoves, the CBC reports. And the same health concerns are coming from gas furnaces.

"I view electrification as a win for climate, but also a way to improve the air that we breathe — improve our health. And so I think it's a good idea to do that, particularly if you're a family with young children in your home," said Rob Jackson, a professor at Stanford who found stoves leak methane (even when they’re off) and significant levels of indoor air pollution.

Joe Manchin took a break from knee-capping American climate policy to go on a tour of the Alberta oilsands with Jason Kenney.

“This isn’t Manchin and Kenney suddenly being the champions of national security for Canada and the United States,” the University of Calgary’s Kristen van de Biezenbos told the Globe and Mail.

“This is Kenney and Manchin being champions for carbon-based economies and using this as an opportunity to fit their pre-existing ambitions and political leanings with a new direction in the conversation.”

Pierre Poilievre was in Alberta this week as well. He’s been drawing big crowds, and organizers claimed attendance at over 5,000 in Calgary. Poilievre led chants of “defund the CBC,” railed against carbon pricing and vaccine mandates and promised to build pipelines in all directions: “I am going to support pipelines south, north, east, west.”

Putin’s war will drive a faster shift to clean energy

Will Russia’s invasion of Ukraine entrench the world’s dependence on fossil fuels or accelerate the transition away from them? Kingsmill Bond is a financial whiz turned clean energy analyst. He became a bit of a celebrity in the world of energy wonks for his work at Carbon Tracker and recently teamed up with Amory Lovins at Rocky Mountain Institute. I’ll leave you with this piece making the argument that Putin has catalyzed the end of the fossil era.

“The supply-side shock of Putin’s war will galvanize the same dramatic response as the 1970s oil shocks did. The difference this time is we’re prepared. We’ve got the renewable solutions. We have the political will. Putin’s war is the kind of catalyst that helps us break through inertia and barriers to change — and makes this energy transition happen.”

That’s all for this week. I’ll be away for the next month and won’t be sending out the Zero Carbon newsletter. Look for it in your inbox again on May 23.