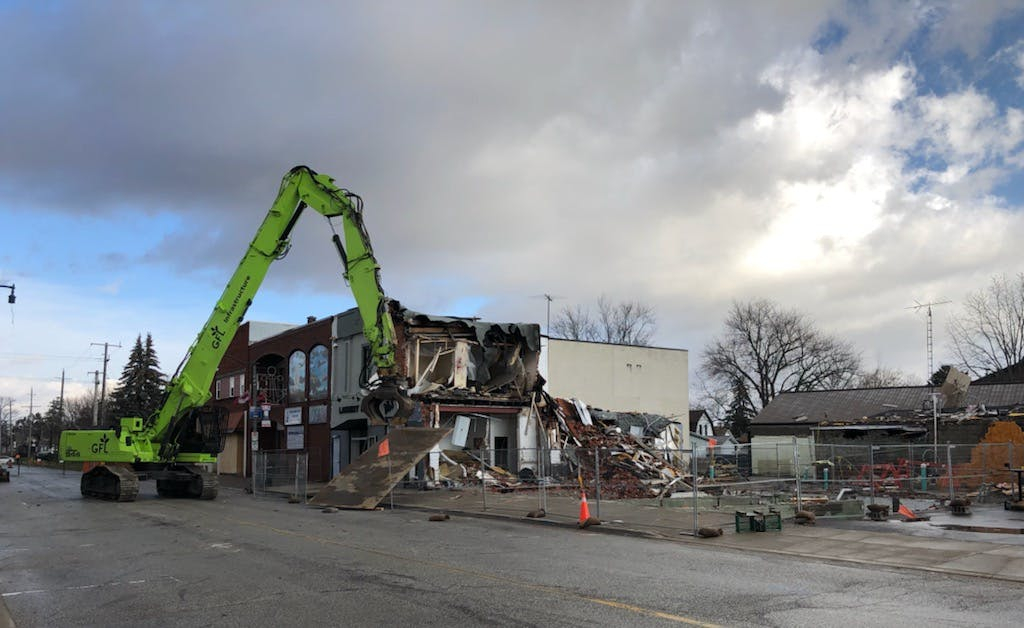 An explosion in Wheatley last year destroyed several buildings and forced the evacuation of more than a hundred families and businesses. Photo courtesy of the Municipality of Chatham-Kent
Previous story

It has been more than seven months since an explosion decimated the downtown core of Wheatley, a small southwestern Ontario town on the shores of Lake Erie. Sixty-eight families still can’t go home and 36 businesses, already battered by the pandemic, are still shuttered. The 3,000 people who live in the community an hour’s drive southeast of Windsor, no longer have a post office, a grocery store, a doctor’s or a lawyer’s office.

“We’ve gone from being a self-sustaining community having all of our essential necessities in the town to literally not having any of them,” says resident Lauren Anderson, who chairs a community group.

The Aug. 26, 2021 blast injured 20 people, sending four to hospital, one with serious injuries. It levelled two buildings, blew out windows up and down the street and knocked pictures off walls blocks away. It could have been much worse: four people were walking away from the site in the moments before it blew up. There just happened to be a truck parked on the street in front that partially shielded them from the force of the blast, says Don Shropshire, chief administrative officer for the municipality of Chatham-Kent that encompasses Wheatley. “Thank God.”

The fire marshal’s office, which is investigating, has yet to release its findings on the cause, but it is almost certainly an abandoned oil or gas well. Officials combing through the wreckage found four long-forgotten wells under the town, previously unknown to the municipality and the people who live there.

This is the case across southwest Ontario.

While abandoned and orphaned wells are often thought of as an Alberta issue, Ontario has nearly as many as Canada’s oil and gas powerhouse province — and they are far older.

The first commercial oil well in North America went into operation in 1858 in Oil Springs, about 40 kilometres southeast of Sarnia. It was in Oil Springs, too, that Canada’s first gusher blew out of the ground four years later, spewing oil a half-dozen metres into the air and emitting a roar heard for miles. Men seeking fortune flocked to southwest Ontario, naming communities such as Petrolia and Oil City after the black gold. The boom raged until the early 1900s when natural gas was also discovered.

While Ontario still produces some oil, Western Canada has taken over as the oil and gas superpower of the country. What remains in Ontario is a proud legacy — and a tremendous burden.

It has been more than seven months since an explosion decimated the downtown core of Wheatley, a small southwestern Ontario town on the shores of Lake Erie. Sixty-eight families still can’t go home. #AbandonedOilWells

The Ontario Petroleum Institute (OPI) puts the number of wells, most of them inactive, at 27,000. In a request for funding, the organization that represents the province’s oil and gas industry estimated that 4,400 of those “pose a risk to landowners and public health and safety.” By contrast, Alberta has an estimated 4,700 orphan wells, Saskatchewan 600 and B.C., 350.

The OPI added there could be “several thousand” more that no one knows about. “Many of them may present many physical hazards as well as health and safety risks because the wells were decommissioned decades ago when plugging practices were rudimentary,” it noted.

The figures come from documents released to Greenpeace under the Access to Information Act that detail a proposal by OPI, backed by the province, for $270 million in federal funding to establish an orphan well program for Ontario. The ask came shortly after the feds announced a $1.7-billion fund to clean up orphan wells in western provinces.

“We don’t think of Ontario [as an oil producer] … it’s been a long time,” says Greenpeace spokesperson Keith Stewart. “When we got [the documents], it was a bit of an unexpected surprise because the Ontario government is pitching the federal government saying, ‘We have a bunch of potential [for] dangerous contamination of groundwater and can you help us fix it?’ If you’ve known this has been there, why haven’t you fixed it already?”

In Ontario, operators of oil and gas wells are responsible for plugging them — if those operators still exist. But in the case of most of the province’s wells, the companies that drilled them are long gone. The responsibility then falls to the landowners. In most cases in Ontario, that’s private citizens.

The Ministry of Northern Development, Mines, Natural Resources and Forestry runs an Abandoned Works Program to support those plugging wells with some financing — costs can vary from $60,000 to millions, depending on a plethora of factors — and technical assistance. But with an annual budget of between $1 million and $3 million, the program has only cleaned up 380 wells since its inception 17 years ago.

Morgan Kerekes, a spokesperson for the provincial ministry, says Ontario supports the industry request for funding to clean up the problem.

“The province is awaiting the federal government’s response and has not received confirmation that they will provide funding to address orphaned and inactive oil and gas wells,” says Kerekes. “Ontario continues to seek to collaborate with the industry and the federal government to address the issues associated with orphaned and inactive wells in Ontario.”

Stewart argues the province needs to identify the abandoned wells and begin cleaning them up, prioritizing the most hazardous. “I wonder how many other time bombs are out there that no one’s really thought about,” says Stewart. “And the people who do know about it aren’t talking because they don’t want to have to deal with it.”

What to do about the thousands of abandoned wells across the province, says Maurice Dusseault, a professor of engineering geology at the University of Waterloo, is a “wicked problem,” referring to the sociology term for a problem that has no easy solutions. Many of the wells date back to before the Second World War when methods for sealing them involved removing the steel casing lining the hole and then dumping in some gravel, lead, a pine tree, you name it. Over time, those seals deteriorate.

“We have an ongoing problem,” says Dusseault, “And remember there are thousands and thousands of these wells that may not leak for a decade, even a century, and then gradually the buoyant methane works its way up around this very poor seal and starts bubbling in somebody’s field or in somebody’s backyard or in the bottom of a creek bed somewhere.”

Methane, when mixed with bacteria that occurs in some geological formations, becomes hydrogen sulphide, which, at high enough concentrations, is deadly. The other thing that can happen — and likely did in Wheatley — is methane reaches oxygen and builds up to the point of being explosive.

“Nobody wants to own this problem,” says Dusseault. “If you ignore it and look the other way, that means you don’t have to do anything… Nobody wants to take the blame. It’s a hot potato.”

In Wheatley, no one knew there were abandoned wells under the town. A gas leak in early June led to a 16-day evacuation and spurred municipal officials to begin to investigate and contact the province.

“We really didn’t know what we were dealing with, so we reached out to the province … and said, ‘Help us,’” says Shropshire. “The best information we could get at that time was this could have been a one-off event.” One expert referred to it as a “burp.” But there was another release, another evacuation, in mid-July.

The municipality found hand-drawn maps of wells drilled in the area in the late 1800s, long before the current town was built. Some were close to where the leak was occurring more than 100 years later, but the maps noted they were only accurate within 200 yards. Locals with historical knowledge recalled a nearby explosion in the 1930s.

“That’s what we had at the time that we were working with,” says Shropshire. “We doubled down with the provincial government in terms of requesting assistance.”

The second time, the province took it more seriously, launching an investigation into the source of the gas. Wheatley’s volunteer fire department began 24/7 monitoring of potential emissions and once again, people were allowed back.

And then, on the afternoon of Aug. 26, gas monitors lit up, signalling “extremely high” levels of hydrogen sulphide. The fire department was already there, maintaining round-the-clock monitoring, and began to evacuate the downtown core.

And then, shortly after 6 p.m., it exploded.

It was just moments before shift change at the hospital in Leamington, about 12 kilometres from Wheatley, where Lauren Anderson works as a nurse. Everyone stayed on, effectively doubling staff numbers to be prepared to care for an influx of injured people. “It’s a miracle we didn’t have anybody severely injured,” she says. “But the emotional part of it is a whole different level and I don’t think that should be discounted: what the effects of this were, the trauma response for anybody whether they were there or not. It’s absolutely terrifying.”

Shropshire credits the province with its response after the blast, saying Premier Doug Ford visited the community and still meets with officials on a weekly basis to ensure they’re getting the support they need. But more than seven months after the blast, the evacuation is still in effect and people still can’t go home. Many have had only moments to access their properties to retrieve belongings. Hydrogen sulphide leaks continue.

“Before we can let them back into their properties and give them some sort of assurance that it’s safe for them to go back in, we need to find out the cause of the gas leaks and we need to understand that whatever can be done to mitigate it is going to reduce the risk to an acceptable level,” says Shropshire.

In the weeks following the blast, the community of Wheatley came together to support each other. Hundreds of thousands were raised to help displaced families; people delivered goods and furniture to neighbours forced from their homes; “Wheatley Strong” T-shirts were made and worn proudly.

The community is resilient, Anderson says, but struggling. People have had to leave town and businesses have permanently closed, while all residents lack those basic services they once had. The investigation and cleanup continue.

There is no timeline for when it might be safe to go back.