Vladimir Putin has made all kinds of catastrophic miscalculations invading Ukraine. He certainly didn’t expect that weaponizing energy would backfire, accelerating the transition off fossil fuels, but it’s happening.

Analysts are getting more and more confident that Putin has catalyzed permanent, structural shifts toward clean energy. They’re starting to say the quiet part out loud:

It took a war criminal to speed up Europe’s green revolution.

For this reason, he has topped our inaugural #POLITICOGreen28 list.

You might hope political leaders would have the wisdom to see that fossil fuels are the common thread — a driving force behind war, inflation, economic crises, climate change and global security threats. For many years, you’d have been disappointed. Too few made the connection, even fewer mounted real action.

But the world’s first global energy crisis may turn out differently. Past “energy” crises have really been about oil. And, although they prompted some important innovations, their overall result has been more fossil fuels, from more sources.

If you’ve followed climate politics for a while, what’s truly remarkable is the brutal war in Europe has not caused it to chuck its climate ambitions and retrench around fossil fuel dependency in the name of security. When things get precarious, governments understandably fall back on the tried and true. Had the invasion and energy chaos happened 10 years ago, the reaction would surely have been very different, instead it shows that clean energy has proven itself both cost-effective and, just straight up, effective.

The suite of new policy frameworks is impressive: for two years prior to Putin’s latest invasion, Europe had been laying the foundation of its “Green Deal,” and the invasion caused the European Union to adopt Fit for 55 (the plan to cut climate pollution 55 per cent by 2030) and the European Commission introduced REPowerEU to “fast forward the green transition.”

“What is different about this crisis,” he writes, “is that, instead of having no choice but to double down on securing fossil fuel supplies, for the first time we can double down on proven, safe and scalable clean solutions. What was once disparagingly called ‘alternative energy’ really does now present an alternative.

“From now on all three elements of the energy trilemma — security, affordability and sustainability — are pushing in the same direction… The Great Energy Price Spike is going to give way to the Great Clean Energy Acceleration.”

The need for energy security has broadened the political coalition behind clean energy. Germany’s finance minister is a telling example — head of the pro-business party, he’d been opposed to all but the marketiest of “market solutions” to climate change, but is now a convert to industrial policy and mandates to scale up renewables, which he’s anointed “the energy of freedom.”

We’re already seeing policies translated into national action plans and results on the ground. As Russia strangles gas supplies to European homes, countries are turning in earnest to electrify heating with heat pumps. In chilly Finland, four out of 10 homes already use heat pumps and sales jumped 80 per cent this year. In August alone, 148,000 Germans applied for heat pump programs.

In August, 148,000 Germans applied for a fresh round of government funding for heat pumps.

REPowerEU plans to accelerate solar power by two and a half times the speed pre-invasion and orders for solar panels have already more than doubled across the continent.

Greece is now unleashing offshore wind and just had a period when the national grid was powered 100 per cent by renewables. Only for five hours, sure, but cast your mind back a few years and remember when Very Serious People scoffed at the notion that solar and wind could ever scale up or a large grid could operate with more than a small fraction of renewables.

You’ve probably heard that some countries are turning back to coal and you will definitely have heard from the fossil fuel industry that war in Europe means the world needs more Canadian oil and gas.

It is true that several countries, including Germany, Austria, France, the Netherlands and Denmark, have put retired coal plants back on standby. Some countries have been running them so they can divert natural gas into storage for the winter. These are temporary emergency measures, and the think tank Ember estimates in a worst-case scenario, these plants might add 1.3 per cent to CO2 emissions — which Europe has cut by 34 per cent since 1990.

No European country has reversed the commitment to phase out coal and, this month, Germany agreed to speed it up. "Coal is not making a comeback in Europe, neither is gas — they are simply not able to compete against cheaper renewables," Ember’s Paweł Czyżak told Politico.

Canada’s oil and gas industry is howling for more export LNG terminals under the pretence of supplying Europe. But, while it’s true the Europeans are scrambling for gas supplies for the next couple of winters, they are simultaneously planning for dramatic cuts in gas this decade. Let’s get charty: 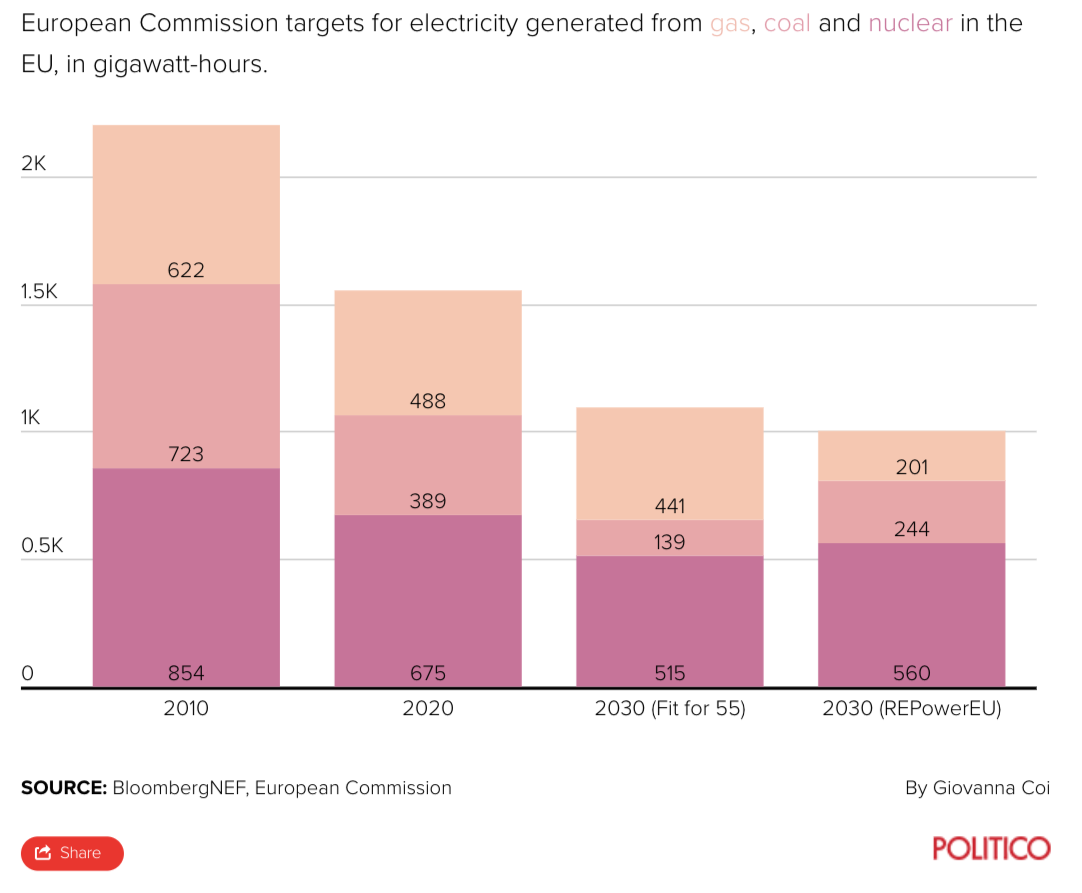 And it’s not just Europe, the energy transition is now undeniably global. Given the bloody headlines, you might expect coal and gas to be booming. But this year, renewables met all of the world’s growth in electricity, stopping any rise in fossil generation. Wind and solar filled three-quarters of new demand, while hydro met the rest.

In China, wind and solar met an astonishing 92 per cent of all new demand for electricity. 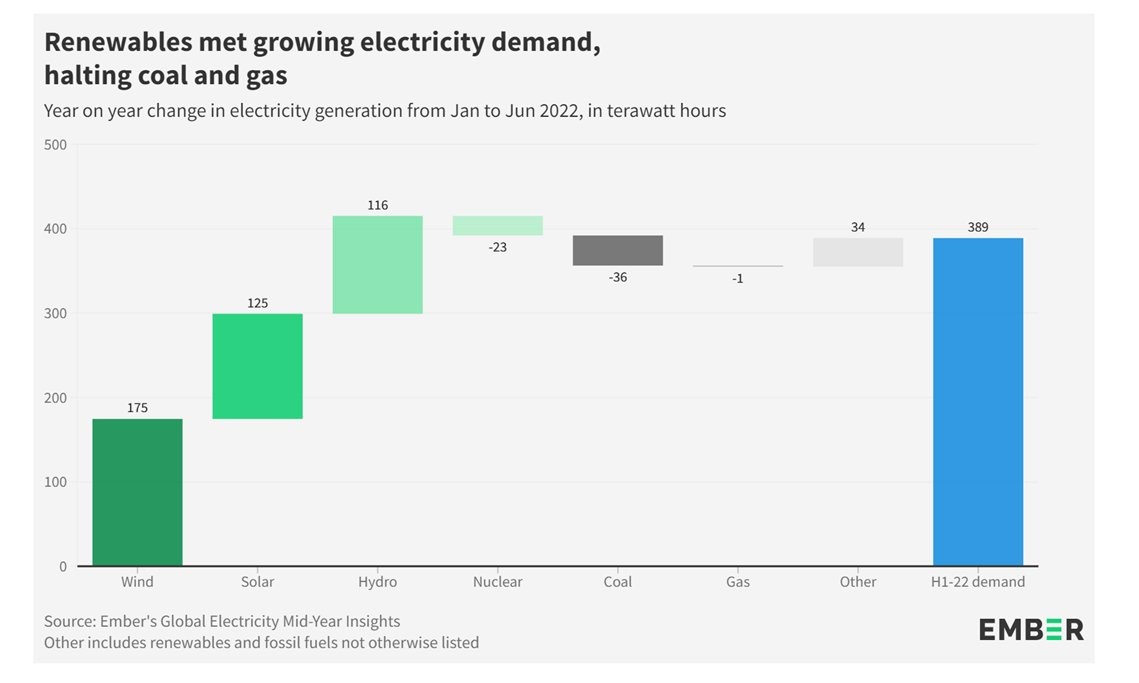 Granted, these numbers are just electricity and only show that low-carbon sources are answering the growth in global demand. But even more important is the view forward for all fossil fuel use. And the key measurement here is what corporates call “capex” — how much they’re investing in future projects and where that money’s going (capital expenditures).

Rystad Energy just ran the most recent capex numbers and found that global investment in wind and solar leapt upwards in 2022. For the first time, investments in rooftop solar, utility-scale solar and wind were bigger than investments in oil and gas. In some places, the payback time for renewable projects is now less than one year.

Oil and gas ticked up as well but not even to pre-pandemic levels, let alone the massive sums that used to be invested in the future of fossil fuels. 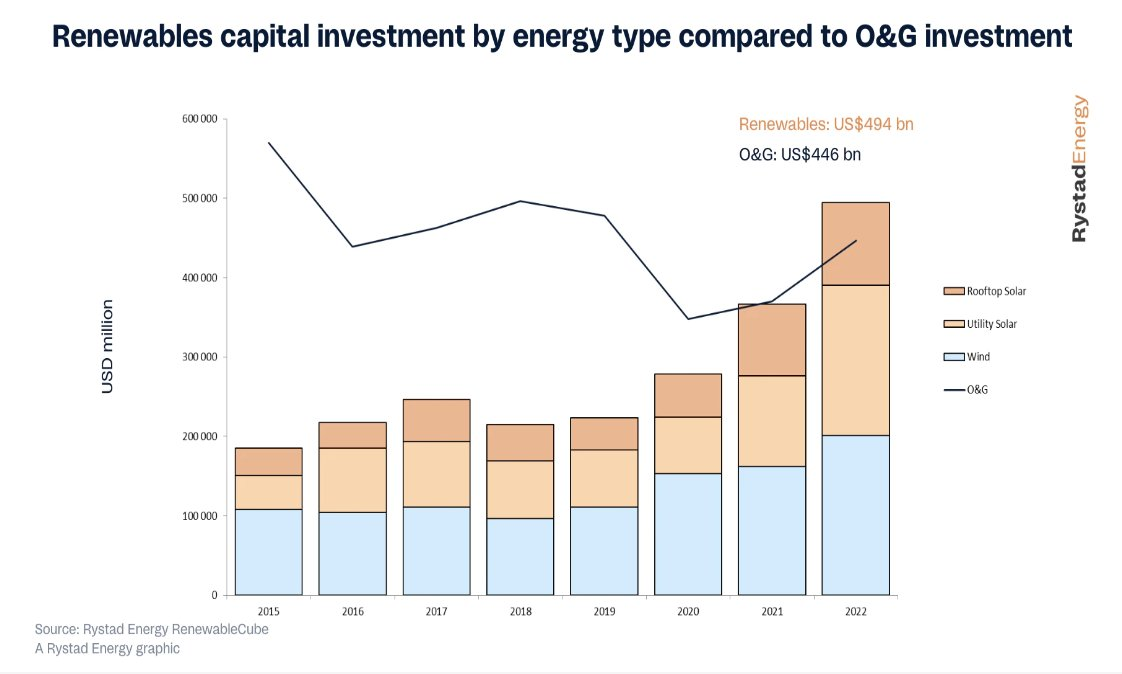 OK, enough with the charts. The story they tell is that, all over the world, people are pushing governments and beavering away on the energy transition. All those efforts are now showing real results. Despite the tyrants, the fossil fuel industry’s obstructionism, the naysayers and setbacks, not a week goes by without news of progress. It’s not happening nearly fast enough but it’s happening and it’s accelerating.

Back on the home front, the Prairie premiers are stoking provincial sovereignty fights, girding for battle over the feds’ looming decision on emissions caps for oil and gas production.

Their federal counterparts are proving equally innumerate, railing against the federal carbon price tripling over the coming eight years. “Tory MPs used the word ‘triple’ 178 times in question period last week alone,” reports The Canadian Press. Then squirming in interviews, unable (not permitted?) to utter the word “rebate” when reporters ask why they won’t acknowledge both sides of the ledger.

Minister Freeland went to Washington and laid out the “Freeland doctrine” — a renewed alliance of democracies “friendshoring” key supply chains to confront a dangerous world in the aftermath of Putin’s invasion. Fossil fuel boosters were quick to seize on her call to expedite infrastructure projects.

They must have missed Freeland’s declaration: “The curse of oil is real.”

“Friendshoring can both defend liberal democracy and help to preserve the planet if one of our primary objectives is to speed up the green transition — together,” Freeland said.

The Freeland doctrine “will cast an even deeper chill” on relations between Alberta and Ottawa, writes Max Fawcett.

Ontario’s energy minister gave the thumbs-up to new fossil gas plants. It’s a big step backwards for the province that phased out coal. Dani Penaloza reports the province admits emissions will rise and the move “will undo a third of emission reductions the province has achieved from phasing out coal-fired power generation.”

Within days, the news got worse — instead of bolstering interties for low-carbon electricity between provinces, the minister confirmed Ontario would not renew the Ontario-Quebec Electricity Trade Agreement. The agreement supplied 2.3 Terawatt-hours of hydro electricity to Ontario each year.

“Windsor has already lost out on a $2.5-billion factory because the region lacks electricity. And by 2025, Toronto will run out of power for the electrification of its transit system,” reports CBC News.

“Logging has been hauling it out faster than Canada's forests — weakened by decades of industrial forestry and rising climate impacts — can regrow,” Barry writes. “That imbalance is pouring billions of tonnes of CO2 onto our metastasizing climate crisis. It’s a rising climate threat that our government greenlights by keeping it off our nation’s official climate books.”

How big a climate threat? 1.3 billion tonnes of stored carbon or nearly five billion tonnes of CO2. On an annualized basis, it’s as much climate pollution as every fossil-burning vehicle on the road plus every gas-fired Canadian home. 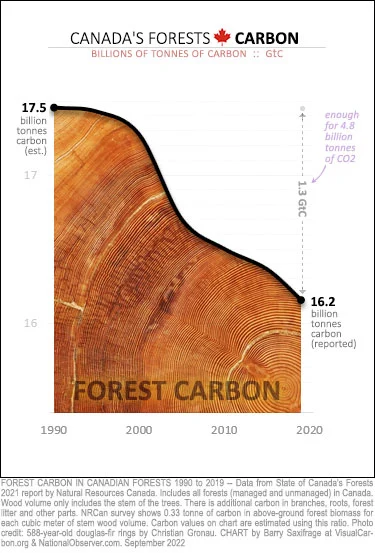 The Competition Bureau is digging into RBC’s climate claims, reports John Woodside. The bank claims to align with the Paris Agreement but is the world’s fifth-largest financier of fossil fuels, providing over US$200 billion to fossil fuel companies since the agreement was signed.

“RBC continues to bankroll toxic fossil fuel projects that are violating Indigenous rights, such as Coastal GasLink, while publicly professing to be a climate leader. This is disingenuous greenwashing at best, and unlawful at worst. It’s time for RBC to cut the empty rhetoric, stop working against Canada’s climate goals, and start aligning its financing with science and justice,” said Richard Brooks of Stand.earth, one of the groups lodging the complaint.

Early this year, the Competition Bureau fined Keurig $3 million over green claims because its coffee pods were unrecyclable (you wonder what the fine for uninhabitable should be).

The latest numbers are out and fossil-burning vehicles are losing ground in Canada.

Heavy commercial trucks are electrifying, too — the Chinese city of Tangshan already has 4,400 heavy-duty trucks in a battery-swapping network.

Most analysts think oil demand for passenger vehicles is already topping out but they assume commercial vehicles will keep on burning. Colin’s team calculates “overall road transport oil demand (will peak) in 2027, but if sales of electric trucks continue to rise sharply in China, that could be pulled forward.”

Robin Wall Kimmerer, the author of Braiding Sweetgrass, has won a MacArthur “genius grant” (her beautiful Skywoman falling was your suggested read in a recent edition of Zero Carbon).

And Britt Wray, author of Generation Dread, has been named a finalist for the Governor General’s Award. Her book is a brilliant synthesis of science and emotional intelligence. If you feel like climate change is overwhelming, you’re having a perfectly sane reaction and Britt can help you deal.

I’ll leave you with a strong recommendation to read William Shatner’s surprising account of his trip to space.

“It was among the strongest feelings of grief I have ever encountered. The contrast between the vicious coldness of space and the warm nurturing of Earth below filled me with overwhelming sadness. Every day, we are confronted with the knowledge of further destruction of Earth at our hands... It filled me with dread. My trip to space was supposed to be a celebration; instead, it felt like a funeral.”

Maybe sending billionaires up there isn’t such a bad idea after all.