Visions of fusion danced in our heads

Great news, everyone! No need to fret about the accelerating onslaught of climate impacts or our fossilized politics, salvation is at hand — fusion is coming.

It takes nothing away from the scientists’ achievement this week to recognize that public reaction to the fusion announcement was very peculiar. Rapturous coverage throughout the mediasphere, viral zealotry on social media. Most notable and most difficult to achieve: full brain-worm penetration among the general public. Not just among the Popular Mechanics crowd but deep into circles not usually enthralled by the mechanics of power generation.

Fusion clearly activated the subterranean narratives that shape our thinking. Several of them are hostile to climate action. Some as ancient as our religious impulse.

An astounding number of holy grails were found this week in the headlines and commentary of the world’s news media. It was hard to miss the appetite for salvation, and it was served with a side of absolution.

The public reaction is particularly odd because we already have a fusion reactor, one so proximate and powerful a good look at it would burn out your eyes. It’s been showering us with energy for a very long time. We can harness the rays it delivers and the winds they generate, cheaply and at scale. And yet power from that original sun is often a subject of derision not salvation.

One key to understanding the reaction is the timeline. The lead physicist openly acknowledged that any commercially useful electrons would be “a few decades'' away. A curmudgeon might point out that those next few decades are precisely the timeline during which we need to have finished decarbonizing.

Fusion in the future poses no threat to fossil fuels today. In fact, the prospect of techno-solutions over the horizon is a key narrative in the new climate denial — predatory delay.

It certainly explains why the most recalcitrant Prairie premier felt comfortable lauding the fusion announcement (nevermind his strange assertion about defying the laws of physics — Premier Moe has always considered them negotiable).

Saskatchewan scientist Dennis Whyte from Shaunavon and his team defied the laws of physics with an incredible breakthrough in nuclear fusion last week.

Outright climate denial has fallen out of fashion in respectable company. And explicitly casting doubt on climate science no longer feels acceptable within companies that would like to be seen as respectable. And so, a new generation of narratives has emerged to prolong the fossil fuel bonanza.

These new narratives don’t cast doubt on climate change but instead cast doubt on any near-term action. Instead of sowing denial, they sow delay.

This is much more slippery terrain. Many of the narratives appeal to those ancient impulses in all of us. They promise a pathway free of difficult decisions, of clashing politics, of solutions that are ideologically inconvenient or inconvenient to incumbent industries.

They often reinforce the underlying narrative that we can have our fossil fuels and cut emissions too. That we can keep burning ever more oil and gas, we can increase fossil fuel extraction, all while claiming the mantle of “climate leadership.”

In many cases, the new narratives are a form of “paltering” — a wonderful word for a devious tactic that John Cook defines as “claims that are strictly true but lead to misleading conclusions.”

It is true that we could really use more clean, firm power. And it’s true that fusion research reached a milestone. It’s also true that green hydrogen has important use cases. That may even be true for carbon capture. But we can’t wait around loading the atmosphere with carbon dioxide instead of deploying the tools already at hand.

Researchers have mapped out a “typology” of these new “discourses of climate delay.” They include paltering strategies like “whataboutism,” smarmy appeals to social justice, and a focus on laboratory wizardry instead of deployment. 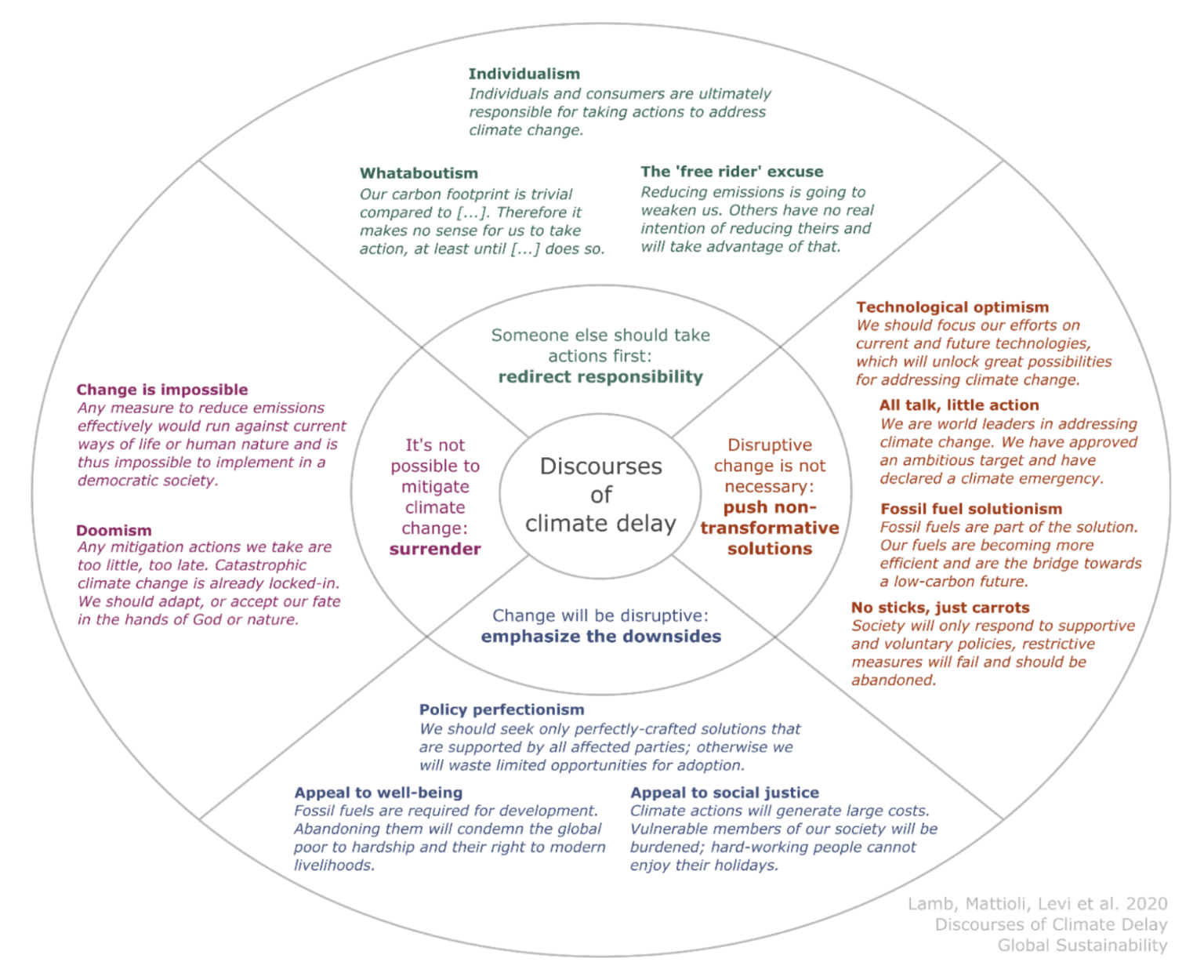 These discourses often prey on basic gaps in understanding among the general public. Reaction to the fusion announcement highlighted a big one around fossil fuels and electrification.

A “holy grail” fusion plant would generate clean electricity. But we’ve only electrified about 20 per cent of energy use in Canada. Almost 80 per cent of our energy still comes from fossil fuels.

The task is clearly to drive that 80 per cent toward zero and get on with electrifying — using the clean sources available today and tapping any that become available someday.

And I hate to be a curmudgeon so close to the holidays, but Canada has actually seen a slight decrease in electrification over the past couple of decades.

So here’s a wonky wish for 2023: let’s celebrate the scientists and back their efforts while sharpening our focus on the pathway right before our feet and tracking our progress along it. Not a sentiment you’re likely to find on a holiday card but one that might defend legitimate hope from predatory delay.

Two-thirds of Canadians think clean energy would be more secure and — here’s a crucial finding — more affordable than one based on fossil fuels. That’s according to new polling by Abacus Data for Clean Energy Canada.

And, 83 per cent of Canadians say it’s important to invest in clean energy, especially given the historic investments in the U.S. Inflation Reduction Act, which passed this summer. 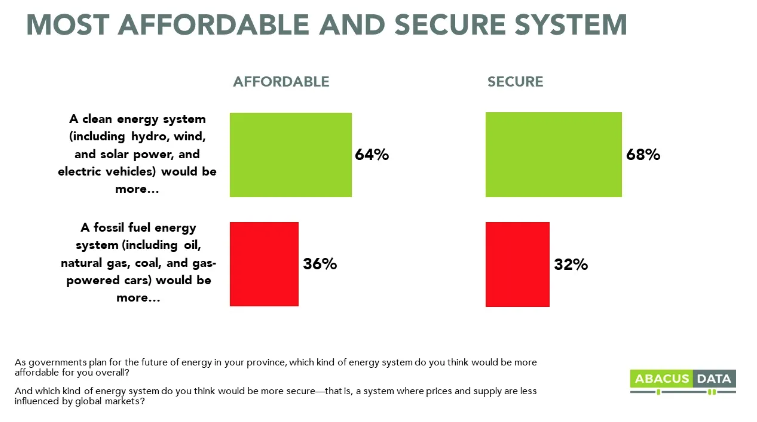 The next phase of predatory delay “hinges on rebranding planet-warming natural gas as green and key to energy security.” Natasha Bulowski reports on new documents that show the Canadian Gas Association and its international counterpart are rolling out a co-ordinated PR campaign.

South of the border, the House Oversight Committee concluded hearings into climate disinformation, also with a big dump of internal industry documents. The documents show “Big oil talks ‘transition’ but perpetuates petroleum,” concludes the Washington Post. In one doozy, Shell execs admit the company’s net-zero pledge “has nothing to do with our business plans.”

Amy Westervelt highlights some key findings: “The industry's climate ‘solution’ leans on getting the public to accept methane gas as a ‘green’ fuel (or, barring that, at least a ‘bridge fuel’) and building out enough carbon capture to make oil ‘low carbon.’”

"Differentiated, or "responsible" natural gas is becoming increasingly important to buyers in both domestic and international gas markets. API proposes supporting the ongoing development of markets for differentiated natural gas, recognizing the significance of these efforts in ensuring natural gas continues to be viewed as a major component of a lower carbon energy future."

Banking on a future

The biggest bank in Europe just got serious about fossil fuels. HSBC announced it won’t lend or finance new oil and gas fields.

“The activists who have been pushing them for years to take this step have won the world a huge victory,” says Bill McKibben.

But a notable exemption quickly emerged — HSBC’s Canadian unit isn’t part of the plan, because it may get sold to RBC.

It's shameful, scandalous that @HSBC exempted its Canadian unit from its new pledge to cut financing to new oil & gas fields because it's selling the unit to climate laggard @RBC.

This is why we need climate related regulation of big banks.#cdnpoli
/1https://t.co/nmWvVkUrDD

Coal is awful. Gasoline is worse

There was a fascinating juncture in this year’s UN climate summit where India insisted that if coal was going to be targeted for phasedown, then all fossil fuels should get the same treatment.

India has a legitimate point. “It is certainly true that coal CO2 must ramp down quickly if we want any shot at avoiding a full-blown climate catastrophe,” writes Barry Saxifrage. “But that is also true for the CO2 from all fossil fuels — including dirtier-than-coal gasoline.” 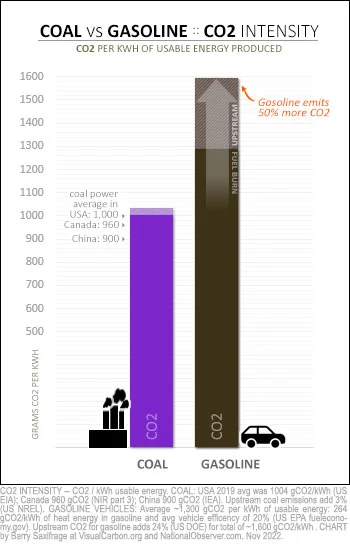 And if you look at the situation per capita, Canadians burn seven times more fossil fuels in the form of oil than Indians burn in coal.

Kansas is trying to deal with the biggest spill to date from the Keystone pipeline. It spilled 14,000 barrels of oil into a creek and the EPA says the operation is particularly challenging because the spill is “dilbit” — diluted bitumen from the oilsands.

“All oil spills are difficult, but tar sands in particular are very toxic and very difficult, so I’m awfully concerned,” Jane Kleeb told The Associated Press. Kleeb founded Bold Nebraska and fought against the proposed Keystone XL. She points out there had already been at least 22 spills along the Keystone pipeline since 2010.

Ontario could build a non-emitting electricity grid according to the folks managing the provincial grid. The IESO (Independent Electricity System Operator) released its Pathways to Decarbonization report this week. As with most such studies, it shows that decarbonization is a team sport: The IESO envisions a combination of energy efficiency, solar and wind, demand-side management, transmission, storage and nuclear.

“The study will be helpful,” said Jason Dion from the Canadian Climate Institute. “Still, it leaves questions about how heavily Ontario will rely on the gas-fired capacity it already has and is developing — and when it will phase it out entirely. It is possible to get off gas well before the study’s 2050 target.”

The European Union is poised to enact the world’s first Carbon Border Adjustment Mechanism program (CBAM). Any imports to the EU would have to be produced under comparable climate laws or pay duties to level the playing field.

It’s the first attempt at a “climate club” — an idea to break the free-rider problem in global climate policy. Instead of pressure to compete with the least ambitious trading partners, more ambitious countries could band together and require others to level up.

“The EU may not possess an intimidating military but when it comes to regulatory clout, the union is a superpower,” writes Keith Rockwell in The Hill. “Rules drawn up in Brussels affect producers of goods and services in every corner of the world. Exporters to the EU are impacted by regulations developed thousands of miles away.”

That’s all for this week. I’ll be taking a break from the newsletter over the holidays. Warmest wishes to you for the new year.

If you’d like to help Canada’s National Observer to go further with our climate reporting in 2023, please donate to our fundraising campaign. We need to raise $100,000 by Dec. 31. We’re almost there but need you to take us to the finish line.

Thank you for reading Zero Carbon. Please forward it along and always feel free to write with feedback or suggestions at [email protected]