By Barry Saxifrage | Analysis, Climate Solutions Reporting | December 15th 2022
#2135 of 2164 articles from the Special Report: Race to a Safer World 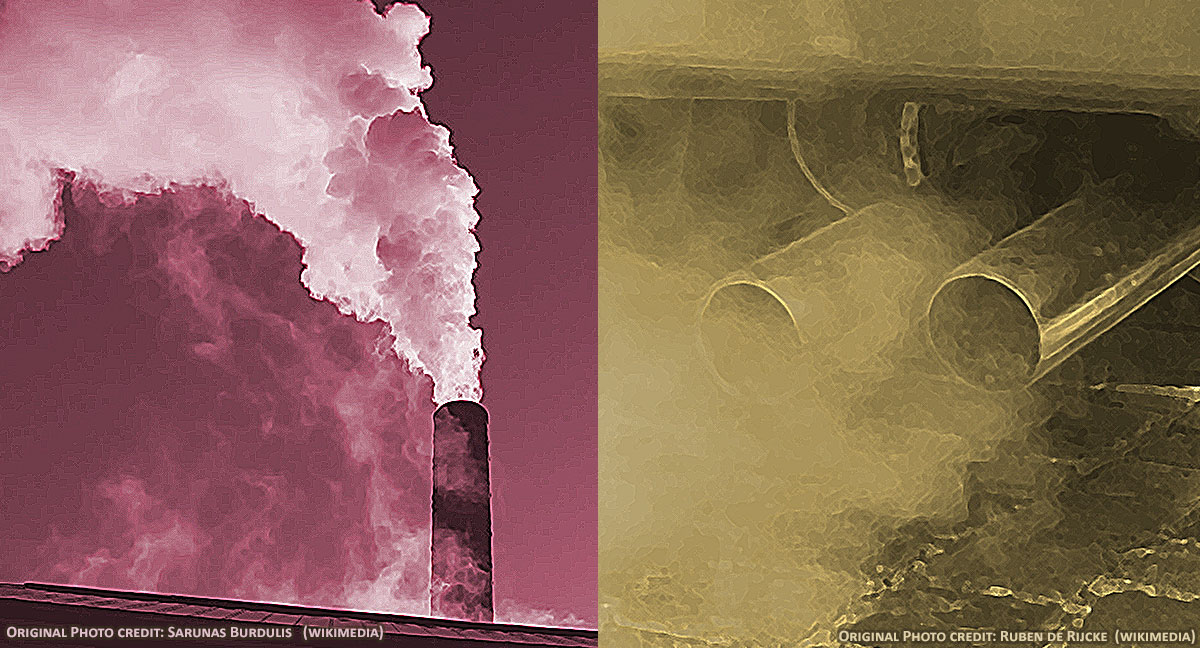 The overwhelming driver of global climate breakdown is burning fossil fuels — coal, oil, and methane gas. Not surprisingly, there is an intensifying global fight over which fossil fuel should be eliminated first.

Canada has been leading a push to single out coal as the first fossil fuel to go. Others, including India and the European Union, are pushing back — insisting the world ramp down all fossil fuels together.

In this battle, coal often gets portrayed as the most CO2-intensive fossil fuel (i.e., emitting the most CO2 per unit of energy). Rarely mentioned, however, is the fact that gasoline is far worse. Here are the numbers.

My first chart shows the CO2 intensity for both fuels.

Coal is shown on the left in purple. The vast majority of the world's coal is burned to create electricity. Coal power plants emit around 1,000 grams of CO2 per kilowatt-hour of usable energy produced (gCO2 per kWh).

Gasoline's CO2 intensity is shown on the right in the tall dark grey bar. Burning gasoline in a vehicle's smaller and less-efficient power plant (a.k.a., internal combustion engine) emits around 1,300 gCO2 per kWh. That's one-third more climate-polluting than coal.

And when you include "upstream" emissions from producing both fuels, gasoline is 50 per cent worse than coal. These upstream emissions are shown by the lighter tops of each bar. Coal takes very little energy to produce compared to gasoline, so it has much smaller upstream emissions.

(Note: In this article, I've used the term "gasoline" as shorthand to represent both gasoline and diesel road fuels. They have similar CO2 intensities, as discussed in the endnotes.)

Roughly half of the world’s oil gets turned into gasoline and burned in vehicles to move them around. Despite this being a primary global use of fossil fuels, I've never seen the CO2 intensity for gasoline power listed. Fortunately, it is simple to calculate from government data. If you are interested in the nitty-gritty of the carbon math, I've included it all in the endnotes.

The main thing you need to know to understand why gasoline is so much worse is that vehicle engines are only half as efficient as coal power plants. That means you need to burn far more carbon fuel — and, thus, emit far more CO2 — in a vehicle engine than in a coal power plant to produce the same amount of energy. In fact, just 20 per cent of the energy in gasoline makes it to the wheels. That's extremely wasteful, expensive, and polluting.

A few years ago, Canada and the U.K. teamed up to launch a Powering Past Coal Alliance. It targets the worldwide elimination of coal power as "the first step".

As Canada pushes the world to eliminate coal first, we should take an honest look at our own gasoline emissions, which are even more CO2-intensive than coal and surging out of control. @bsaxifrage writes for @NatObserver. #Analysis

Both these nations, however, rely on coal for just a tiny sliver of their energy use. In contrast, people living in lower-income nations disproportionately depend on coal to power their lives.

My next chart puts some numbers on this economic divide. The height of each bar on the chart shows the percentage of total energy use that comes from burning coal.

The purple bar on the left shows the role of coal in the 38 nations in the Organization for Economic Co-operation and Development (OECD). These are predominantly high-income, developed economies. Canada is one of them. Collectively, these nations produce around half the world's GDP. Together, they rely on coal for only 12 per cent of their energy.

The role of coal in the rest of the world is represented by the taller bar on the right. This lower-income group is three times more coal-dependent — relying on coal for an average of 36 per cent of their energy.

An even more extreme divide is shown by the two yellow bull's-eyes on the chart. They show Canada gets just three per cent of its energy from coal, while India relies on coal for 57 per cent. So, it's not hard to understand why India is pushing back on Canadian efforts to single out coal from the other fossil fuels.

And speaking of those other fossil fuels, it turns out that Canadians burn a whole lot of them.

My last chart lets you compare fossil fuel burning per capita in Canada and India. The height of the bars shows the total energy from each type of fossil fuel — in gigajoules (GJ) per year.

The tiny bar on the left shows India burns relatively small amounts of fossil fuels — just 24 GJ worth in total. The purple part shows how extremely coal-reliant they are.

The towering bar on the right shows that Canadians burn 10 times more fossil fuels per person than people in India do.

And the dark grey part of Canada's bar shows that 110 GJ comes just from burning fossil oil — nearly all of which is gasoline. So we are burning seven times more fossil fuels per person in the form of oil than Indians are burning in the form of coal.

And as we saw earlier, gasoline is the far more climate-polluting fuel per unit of energy.

It is certainly true that coal CO2 must ramp down quickly if we want any shot at avoiding a full-blown climate catastrophe. But that is also true for the CO2 from all fossil fuels — including dirtier-than-coal gasoline.

Here's some additional information for those wanting a deeper dive into the carbon math, data, and sources.

The CO2 intensity of gasoline power versus coal power

Gasoline engines are only half as efficient as coal power plants. According to the U.S. Department of Energy, vehicle engines convert around ~20 per cent of the heat energy in gasoline into work energy (to turn wheels). Their efficiency ranges from 16 per cent to 25 per cent depending on driving conditions. In this article, I used 20 per cent for the calculations and charts.

The remaining 80 per cent of the energy in gasoline isn't used. It turns into waste heat that we don't want. This waste heat is expensive in several ways. Gasoline vehicles require complicated systems to get rid of all this unwanted heat — engine oil, radiators, and exhaust/mufflers. In addition, drivers of gasoline burners need to buy five times more energy than is actually needed to move the vehicle.

In contrast, battery electric vehicles (BEVs) are ~90 per cent efficient. So, drivers don't need to buy as much extra energy to run them. That's the reason BEVs are so much cheaper to run.

The CO2 intensity of gasoline HEAT versus coal HEAT

But almost no one burns gasoline for heat. So it doesn't matter what the carbon intensity is for that. Instead, nearly all gasoline gets burned to move vehicles. And burning gasoline to move vehicles is hugely inefficient. As a result, the CO2 intensity for what gasoline is actually used for — moving vehicles — is many times higher than for heating.

In the article, I only discussed "gasoline" for simplicity and because 95 per cent of passenger vehicles in Canada burn gasoline.

Diesel cars have a similar CO2 intensity as gasoline cars.

It is often stated that diesel engines can be a bit less CO2-intensive than gasoline engines. But studies of real-world driving show most or all this benefit gets lost before getting to the wheels. For example, this study by the International Council on Clean Transportation (ICCT) concluded: "A modern gasoline vehicle can have the same or even lower CO2 emissions than a comparable diesel version."

One big reason is that diesel vehicles require a lot of extra energy to filter out the higher levels of NOx gases. Trying to avoid paying that energy penalty was the motivation behind the Dieselgate emissions cheating scandal by VW and others a few years ago. In addition, diesel vehicles are often heavier and have more powerful engines, further eroding the real-world efficiency for them.

Upstream emissions are emitted during the extracting, refining, and transporting of coal and gasoline. Here are the values I used in my calculations and charts:

Dynamite in the logjam

Your numbers conclude with

Your numbers conclude with the automobile; a 2 ton device that moves a 100 kg human. So most of THAT energy is moving the machinery.

There are two devices; rarely seen in Canada that instantly improve these numbers.
1. Trains, which can carry thousands of people using only a few times more fuel.
2. Bicycles, which only have to move 150 kg or so. Human power uses no significant fossil fuels. Coal-fired eBikes use a few watts per day. Even those foul 2 stroke motorized bicycle conversions use a tiny percent of what it takes to move a car.

Yet automobiles have been the default transportation system in North America killing children for a century.

"Human power uses no significant fossil fuels."
Our food supply-chain is energy- and fossil-fuel intensive: farm machinery, fertilizer, irrigation, processing, packaging, transportation, retail and distribution. Meat and dairy production implies another chain of emissions for livestock feed. Worse, we throw out and waste much of our food.

I read some numbers a few

I read some numbers a few years back, about the reduction of emergency and hospital admissions for breathing problems as a result of closing coal burning plans for electricity production.

I can't say I noticed a difference, particularly, but then I don't have asthma or any of the other lung plagues of modern urban society.

I will say, though, that I find auto exhaust fumes (diesel or other) to be hugely debilitating, and the virtual cessation of traffic past my home during the peak of Covid lockdowns was very noticeable.

I will also say that the installers of my now several-years old furnace insisted on venting it to the side of the house, so I can no longer garden my side yard except during the no-heating season. I'm not a lawn kind of person, and even less so a "cover it with concrete" sort, so just do what I can ...
I'm told that the toxic burning waste arises from the "marker" gas.

Calculations for the CO2

Calculations for the CO2 signature of EV (vs. coal) are incomplete. It takes the energy used to generate electricity as the actual value, but fails to factor in significant transmission losses, the <100% efficiency of the engines, the extra cost of battery and chip production and subsequent recycling CO2.
Adding all these bits would make the comparison much less compelling.
That said: "Get on your bike!"

This also puts another

This also puts another perspective on China which is sometimes criticized for continuing to rely on coal for electricity generation, especially since at the same time China is the world's leader in the production of EVs. It seems China has its priorities right, while the "coal first" campaign by Canada and the UK is rather hypocritical.