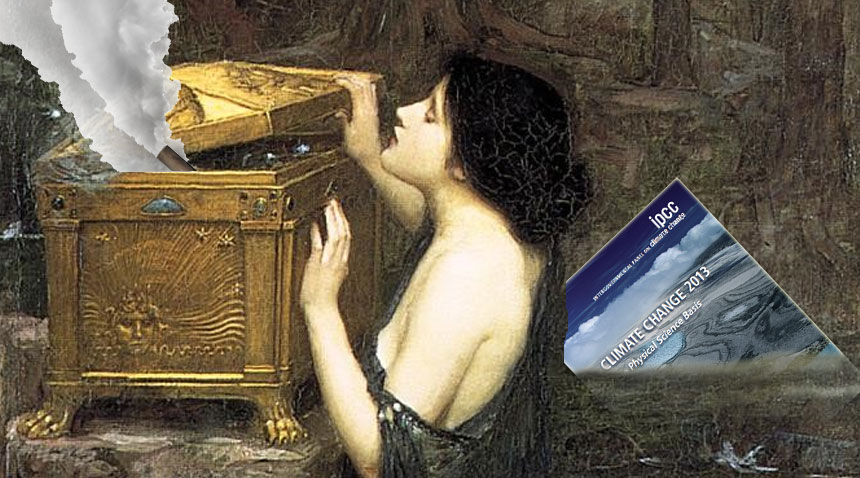 "Widespread" and "unprecedented" changes are already upon us.

Like Pandora's gift from Zeus, the gift of fossil fuels has come with some very unexpected — and unfortunately very nasty — downsides.

Fortunately, we now have the unprecedented power of modern science to inform us about the miseries that are escaping. Will humanity heed these warnings and close the lid in time?

To give a brief flavour of what the latest and best climate science is telling us, I compiled key quotes and highlights from the world's most respected source: the International Panel on Climate Change (IPCC) Fifth Assessment report.

This is the report that all the nations attending the Paris 2015 UN climate change conference will be relying upon to understand the climate risks and options. I've grouped quotes and highlights from the report by theme and added some emphasis.

The IPCC report clearly states that climate change is taking place today. Here are some quotes:

"Warming of the climate system is unequivocal."

"Changes in many extreme weather and climate events have been observed since about 1950."

"Many of the observed changes are unprecedented over decades to millennia."

"Recent climate changes have had widespread impacts on human and natural systems … [including] changes in many extreme weather and climate events."

Impacts will last for centuries

"Most aspects of climate change will persist for many centuries even if emissions of CO2 are stopped. This represents a substantial multi-century climate change commitment," the report also states.

"Without additional mitigation efforts beyond those in place today, and even with adaptation, warming by the end of the century will…"

The expanding parade of misery

"Continued emission of greenhouse gases will cause further warming and long-lasting changes in all components of the climate system, increasing the likelihood of severe, pervasive and irreversible impacts for people and ecosystems," including:

Some of the big unknowns

"The precise levels of climate change sufficient to trigger abrupt and irreversible change remain uncertain, but the risk associated with crossing such thresholds increases with rising temperature," the report warns. The best science is unable to rule out such rapid and calamitous earth-system tipping points as:

"Emissions scenarios … likely to maintain warming below 2°C… are characterized by":

"We have the means to limit climate change and build a more prosperous, sustainable future."

The IPCC report says that multiple economic models suggest that keeping climate change below 2°C could be done with as little as a one per cent loss in cumulative economic growth.

For example, the average of the economic models the IPCC evaluated found that the costs to keep global warming below 2°C would reduce economic growth over the next century from 600 per cent down to 595 per cent. To keep costs down however requires using the most economically-efficient climate policies, such as an economy-wide price on carbon.

Delays in mitigation "lead to higher utilization of… coal in particular, in the short run… To compensate… particularly oil and gas would need to be reduced much more strongly in the long run."

Every few years the United Nations IPCC compiles the latest climate science from more than 30,000 peer-reviewed studies by over 800 climate scientists in 80 different nations. Then every major nation — including the federal governments of the biggest climate polluting nations of China, USA, India, Russia, Japan, Germany, South Korea, Saudi Arabia, Canada, Brazil, and the UK — approve, line by line, the summary and basic findings. The most recent IPCC report (Fifth Assessment) was released in 2014.

Its four volumes contain thousands of pages covering nearly every aspect of climate research. It is the most authoritative and respected summary of the science and is used by the world's major governments, businesses and civil society to understand and take action on the climate threat.