Delivering food after the Nepal earthquake 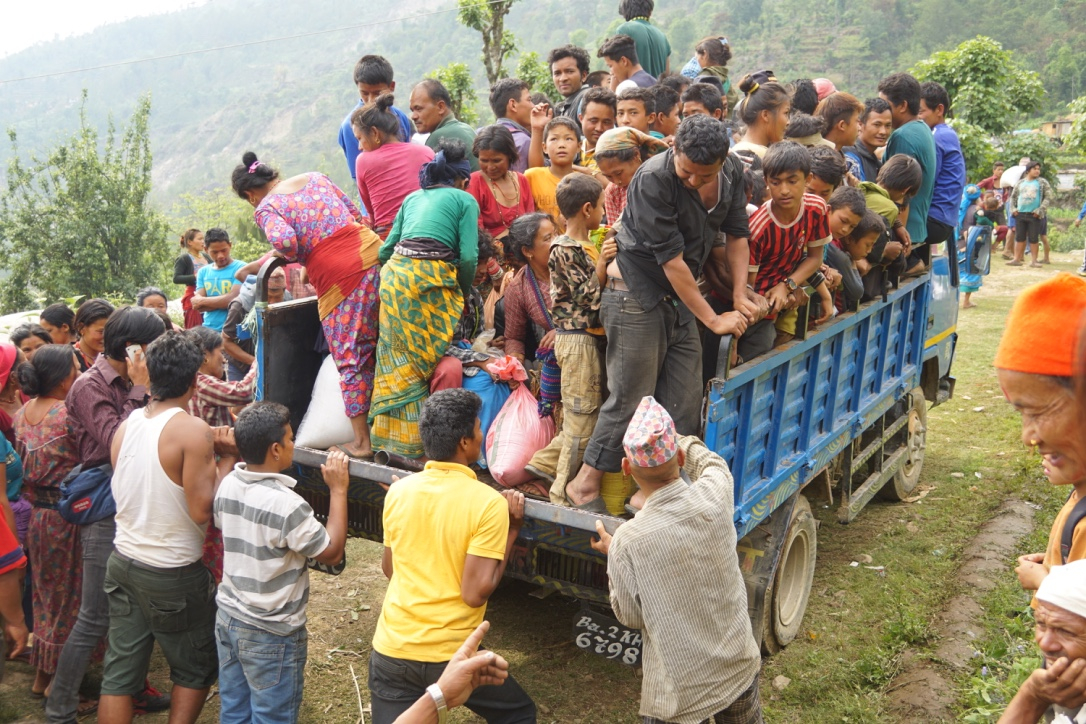 After a needed twelve hour sleep, I groggily made my way over to the bathroom, banging my head on the door frame in the process.

I’ll need to get used to infrastructure built for people generally under six feet tall. Naturally, I banged my head on the way out, this time hopefully learning my lesson.

We met up with a few Nepalis and began the six hour drive to Bhorle, the village we would be delivering food to.

On the way there, we passed various villages and towns and were exposed to some of the worst damage we had seen so far.

Nearly every building on the way had some form of damage. A concerning amount were reduced to nothing but piles of bricks. It was apparent that some aid had reached villages, mainly because of the, (for Nepal), easy access.

A town we drove through had essentially moved to it’s outskirts and created a tent town. People’s homes were either destroyed, or damaged enough that they were too scared to return.

We arrived at Trishuli, a small town after three hours of driving. We purchased the 175 bags of food and working together, loaded up the truck. Now only an hour from Bhorle, the road was beginning to worsen.

It was obvious why aid groups hadn’t reached places like the village we were heading to.

The dirt roads were steep, and to say the least, sketchy.

Only minutes away now, the truck carrying the food came to a stop at the beginning of the descent to the village.

The driver was worried we wouldn’t be able to make it back out if it rained.

Around monsoon season, it is almost guaranteed to rain in Nepal each day. We considered our options and decided to continue regardless.

When we arrived, 170 families came out to greet us, all with smiles and apparent happiness. I love this about Nepal. Even in these trying times, people generally smile whenever they see you and are beyond kind.

While Dave got out of the car and instantly looked like he was in his zone, I sheepishly got out and did my best to not look like a complete idiot as people stared.

I watched as Dawa, an amazing man whose kindness continues to amaze me, handed out the bags of food.

A large group of boys came and stood around me, mainly staring and giggling.

One boy who spoke some English, and appeared to be around twelve, told me about his mother dying in the earthquake, along with his grandmother, and great grandmother.

He pointed out his grandfather who looked defeated. I nodded my condolences, not knowing what else to do. He went on to describe how he had been sitting in a house when the quake hit. He ran out, only to look back to see the house collapse, nearly escaping being buried by rubble.

Karma Sherpa, who runs The Small World which works with Dave's non profit, Kina, tried to explain to the villagers how the earthquake was natural and that God was not angry with them.

He was trying to restore some hope to the villagers who desperately needed it.

We made it out of the village before it could begin to rain.

While the food will feed the village of roughly 1200 for around a week, further aid will inevitably be required.

Closer to Kathmandu the rain began to pick up, giving us a taste of the upcoming monsoon season. We sat in the car thinking about those who did not have shelter yet, something we’d be delivering to areas in the upcoming days.

We finally got back to the area we were staying in after a 5 hour return drive.

Despite being much older than me, he insisted he carry it, essentially taking it off my shoulders, again displaying his unquestionable kindness.