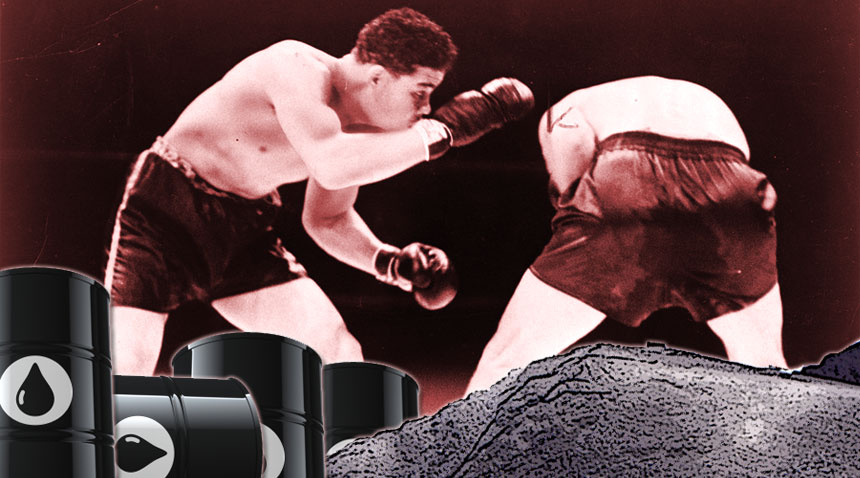 King Coal is winning the fight over our remaining 2°C Carbon Budget, but Big Oil has started fighting back. Graphic by Barry Saxifrage. Louis v Schmeling photo from Library of Congress collection.
Previous story
Next story

A new, and more serious, round has begun in the climate fight. Fossil fuel giants are starting to fight each other for the world's dwindling carbon budget.

At stake are trillions of dollars.

As the world's best climate science makes crystal clear, to preserve any safe and sane climate the vast majority of fossil fuels will have to stay in the ground.

The owners of those fossil fuels have now begun fighting over who gets to sell their fossil carbon, and who doesn't.

Every single percentage point of the global 2°C carbon budget that is won or lost is worth 20 billion barrels to Big Oil. At today's prices that is more than a trillion dollars.

Unfortunately for Big Oil, King Coal has been relentlessly grabbing a significant, and ever growing, share of the remaining carbon budget away from them. But now Big Oil is uniting and starting to fight back in earnest.

As the climate crisis grows more pressing, these fossil-vs-fossil battles over the remaining carbon budget will likely intensify.

To give a sense of the emerging fight, I'll first turn to global energy experts for their analysis of King Coal's recent winning form. Then I'll highlight three major body blows that Big Oil has recently landed on King Coal.

In recent years, King Coal has been digging and burning their fossil carbon much faster than Big Oil. As a result, our carbon budget is being spent ever more on coal, leaving less for oil. 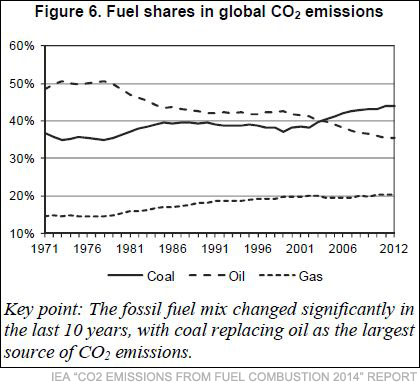 "The fossil fuel mix changed significantly in the last 10 years, with coal replacing oil as the largest source of CO2 emissions." — (IEA 2014)[i]

Their data shows that coal has grabbed a six per cent CO2 share away from oil in just the last decade. Six per cent of the remaining 2°C Carbon Budget is ~ 60 billion tonnes of CO2 (GtCO2). Here's what each combatant could do with that:

You might notice a critical fact in those numbers: each tonne of CO2 is far more valuable to Big Oil than to King Coal. Or put another way, society places more value on what oil delivers per tonne of CO2.

The latest International Panel on Climate Change (IPCC) report also highlights King Coal's surge and says that our failure to limit climate pollution has been giving coal the upper hand:

The last decade has seen "increased use of coal relative to other energy sources." Delays in climate mitigation "lead to higher utilization of… coal in particular, in the short run… To compensate… particularly oil and gas would need to be reduced much more strongly in the long run." — (IPCC 2014)[ii]

On the ropes and facing trillions of dollars in lost prize money, Big Oil has started fighting back. Here's the blow-by-blow commentary on three prime examples:

Exhibit A — API throws coal to the climate wolves

The American Petroleum Institute has represented the US oil and gas industry for nearly a century. Their 2015 energy report is an eye-opening example of how serious Big Oil is getting about throwing coal under the climate bus.

For the first time the API opens their report to many other forms of energy. But they only choose competitors of King Coal.

They lead off with oil, of course. And there is no mention of pesky low-carbon competitors of oil... and no mention of climate change either. Next, however, they hand over most of their annual oil report to the electricity sector. If that seems an odd choice, read on.

Carbon pollution is mentioned 37 times. "Climate change" gets brought up 13 times. Everyone wants to talk about how great the new EPA carbon regulations are for power plants. Towards the bottom "threatened" coal gets to try to respond.

To give a quick snapshot of this amazing oil-sponsored smackdown of King Coal, here are some money quotes from each of the different energy industries in the order they appear (emphasis added):

In summary, the US oil industry's lobbying arm suddenly decides to hand over most of their report to the electricity sector. And they apparently have no problem with "climate change" and "carbon emissions" becoming a major theme in the energy discussion (more than 50 mentions in 50 pages).

Well, at least they don't mind when it's aimed at King Coal.

The Big Oil super majors are increasingly speaking out about the need to stop burning coal:

And all three Big Oil corporations now advocate for a price of carbon as the best way to manage the climate crisis.

Certainly all three Big Oil companies are keenly aware of what carbon pricing will do to King Coal. For example, take a look at what the US Government's Energy Information Agency (EIA) says a carbon price will do:

The upper red lines in those two charts are the EIA "reference case" that lacks carbon pricing. The blue lines are what EIA says will happen with a slowly rising price on carbon. Notice anything different between the coal and oil forecasts?

A rising carbon price drives down coal use by a jaw-dropping 75 per cent in a single decade while oil use is barely affected.

That is because, as noted above, oil delivers much more value to society than coal does per tonne of CO2. So putting a price on CO2 and letting the marketplace pick winners and losers will KO coal.

In the high-stakes fisticuffs for the remaining carbon budget, a price on carbon quickly leaves King Coal flat on the mat in the world's second-biggest coal market. In contrast, Big Oil is barely affected in the world's largest oil market.

And that combination is exactly what Big Oil needs to maximize how much of their oil gets out of the ground.

"We’re the only country in the world that’s committed to getting out of the dirty coal electricity generation business."

Can you imagine Stephen Harper talking about getting out of the "dirty oil" business? NFW. (That stands for No Freakin' Way, by the way.)

Instead, when it comes to Big Oil, the Harper government has repeatedly delayed— for seven years and counting — their promised climate regulations on the oil sector. Finally, a few months ago, Prime Minister Harper emphatically insisted that it would be "crazy, crazy" to regulate climate pollution from the oil sector.

In Canada, Big Oil is driving national climate failure with its soaring levels of climate pollution. Yet it continues to be exempted from responsibility for its surging emissions. To make up for it, "dirty" King Coal is getting tossed overboard.

The real "war on coal" is just getting started.

This fossil-vs-fossil fight between King Coal and Big Oil is just getting started. As noted, trillions of dollars are at stake over these small percentage swings. As climate impacts continue to roll in with greater intensity, the risk that most fossil carbon will become worthless grows ever more real. And every day the world's remaining carbon budget gets smaller.

And here's the kicker: even if humanity is reckless and immoral enough to blow past the 2°C roadblock and cook the planet by 3°C or 4°C, there are still huge amounts of known oil, coal and natural gas resources that will have to stay in the ground. Blowing past 2°C doesn't make the fight go away. In fact it radically increases the economic value of each percentage point share of the eventual carbon budget.

The fight is on. Any bets on who ends up flat on the canvas?