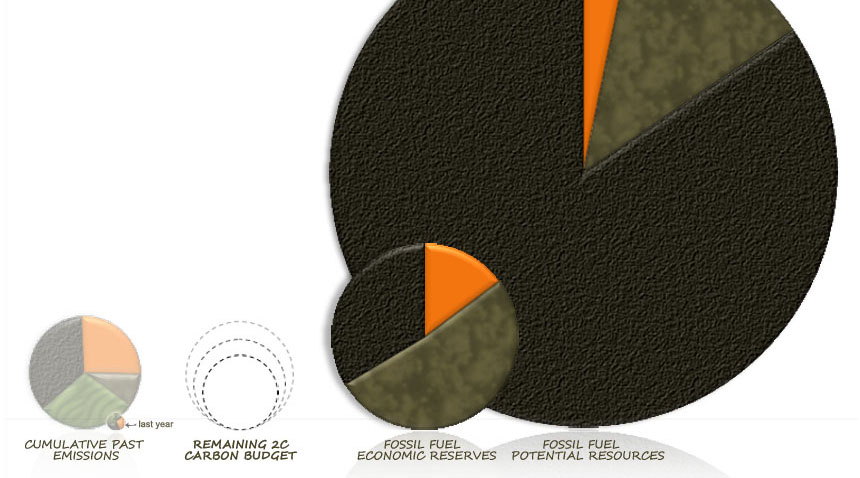 The major governments of the world, in an effort to prevent the most damaging impacts of climate change, have pledged to keep global warming below a 2°C increase. To have a likely chance to do that, only so much more carbon can be dumped into our atmosphere. That is humanity's 2°C carbon budget.

Climate scientists have understood about carbon budgets for a long time. But only recently have they been able to calculate the size of our remaining 2°C carbon budget. When they did, it became crystal clear that most of the known fossil fuel reserves on earth can't be safely burned.

And that, to put it mildly, changed everything.

Simple, familiar and easy to compare

An important, and deeply unfortunate, fact about carbon pollution is that it can linger for centuries in our air, slowly accumulating. That means the cumulative amount of carbon pollution, not the rate in any particular year, determines how bad things will get.

In the last few years, better data, knowledge and computer power combined to allow climate scientists to determine how much global temperatures will likely rise for various cumulative amounts of carbon pollution. Carbon budgets are now available for temperature rises of plus 2°C, plus 3°C, plus 4°C and so on.

Suddenly it was drop dead simple to understand what needed to be done to preserve a safe climate future.

Here's the remarkable story of how it has played out ... so far.

In March 2012, a group called Carbon Tracker took one of the first 2°C carbon budget calculations and compared it to how much carbon the world's fossil fuel companies had left in their reserves. Their report, Unburnable Carbon, took the financial world by storm.

Suddenly concepts of "stranded assets," "unburnable carbon" and "carbon bubbles" became part of the discussion at the highest levels. The simple, familiar and easy to compare metric of carbon budgets quickly inserted climate reality into the global financial world.

A few months after that report Bill McKibben wrote an article in Rolling Stone for a general audience about the same climate budget calculations. It was titled Global Warming's Terrifying New Math. The tag line said it clearly: "Three simple numbers that add up to global catastrophe - and that make clear who the real enemy is."

It was an article aimed at the general public about three science numbers. It might not seem like a winning formula in a pop culture magazine, but the simplicity, clarity and power of the carbon budget numbers caused the article to go wickedly viral.

The article was so popular that McKibben used it to launch what quickly became a global divestment campaign aimed at convincing investors to yank their money from the fossil fuel sector. A University of Oxford study calls it the fastest growing divestment campaign in history.

While Carbon Tracker and McKibben had to rely on a single carbon budget calculation from one set of climate scientists, the IPCC report now provides a range of carbon budgets based on nearly a thousand scenarios from teams all over the world.

To help visualize these IPCC carbon budgets, I created the graphic below.

This graphic shows our remaining 2°C Carbon Budget. It compares it to our past, present and potential future emissions. Just a glance shows how wildly dangerous it would be to burn more than a small fraction of our known fossil fuel reserves. That simple clarity is the power of carbon budgets.

Here are the details.

On the left of the graphic, a faded circle represents all of humanity's cumulative climate emissions from 1750 to 2011. These have totaled 1,900 billion tonnes of CO2 (GtCO2) so far. Coal has been the largest source with oil and land changes like deforestation following closely. In addition, last year's emissions are shown as a separate smaller faded circle.

Humanity's remaining 2°C carbon budget appears next in the graphic as a set of empty dashed circles. The IPCC's carbon budgets are based on probabilities as follows:

LIKELY. The inner circle is 900 GtCO2. If humans release less than this, then we will likely keep global warming below 2°C.

COIN FLIP. The middle circle is 1,300 GtCO2. If our cumulative emissions rise to this, then our odds of staying below 2°C fall to a 50-50 coin toss.

UNLIKELY. The outer circle is 1,700 GtCO2. If we release up to this much, then it becomes unlikely that global warming will stay below 2 C.1

Too much fossil carbon left to burn

Unfortunately, as the IPCC data also points out, the amount of fossil carbon we know about vastly exceeds what we can safely burn.

Today's economically-viable fossil fuel reserves contain five times more carbon than our 2°C budget. As my graphic shows, about half of this is natural gas. A third is coal and the remainder is oil.

The IPCC data shows that releasing this much more fossil fuel carbon into our air would likely raise global temperatures by more than 4 C 2 -- triggering "severe, widespread, and irreversible impacts globally." This is a world in which carbon pollution in the atmosphere exceeds 1,000 parts-per-million (ppm).

As the World Bank's Turn Down the Heat report notes in its headline: "A 4°C warmer world must be avoided … If there is no action soon, the future will become bleak … [bringing] a cascade of cataclysmic changes … there is also no certainty that adaptation to a 4°C world is possible."3

In addition, the IPCC report says the potential fossil fuel resource base contains another 40 times too much carbon.5 As my graphic illustrates, much of this is coal.

Despite already having more economically-viable reserves than can be safely burned, the fossil fuel industry spent over a trillion dollars in the last two years to get at even more fossil carbon from this gigantic pile of potential resources.6

Climate scientist Dr. James Hansen says: "Burning all fossil fuels … would make most of the planet uninhabitable by humans, thus calling into question strategies that emphasize adaptation to climate change." Temperatures would rise 20 C to 30 C across the planet.7

Failure to act is inflating a carbon bubble

It is becoming increasingly accepted that fossil fuel reserves dramatically exceed what can be safely burned. The choice is clear: either our climate system gets energized to dangerous levels, or most fossil fuel assets stay in the ground. Here are some recent statements:

Next up: Tar sands and carbon budgets

My previous article in this series showed how surging emissions from Alberta's tar sands industry has been the overwhelming driver of Canada's climate failure so far. My next article returns to the tar sands to show how the industry's expansion plans could single-handedly wipe out the entire remaining 2 C carbon budget for all Canadians.

The IPCC Fifth Assessment report has a table (SPM.1) that lists a wide range of carbon budgets and the likely global temperature increases that will result from each. This is the data used in my graphic and article. Here is the table.

13 The Eonomist editorial: Either governments are not serious about climate change or fossil fuel firms are...